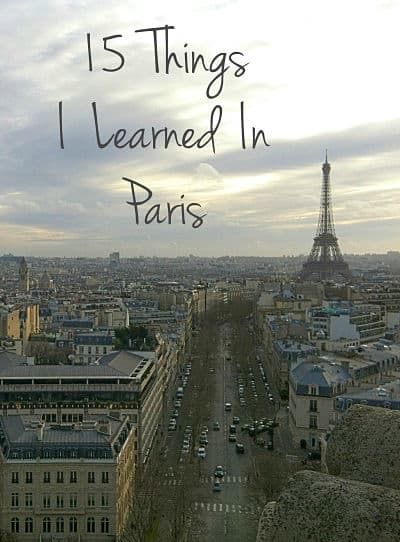 I don’t think I’m always qualified to write ultimate destination guides about every place I’ve been. Sometimes you need a little more time to really delve into a place!

But what I can write about is my experience and hope it helps and inspires you on what to do on your own adventure.

I’d love to write a list of all the things to do in Paris, but 3 days was the perfect amount of time to see the main sites of the city and to leave me wanting to go back for more. If you’re short on time, you can even the highlights of Paris in 24 hours! I went with my parents on a family trip, and Paris can be a great place for kids with plenty of things to do.

So instead of an ultimate Paris to do lishere aree’s 15 things I learned on my trip to Paris that may help you with your future travel planning.  Except number 15. That one was a mistake.

1. How to check the hotel address

Sometimes hotels like to have multiple locations. Checking your actual booking instead of Google means avoiding a late night tiki tour on three metro lines and a bus, instead of the one line it would have taken if you hadn’t gone to the wrong hotel location to begin with. Not just applicable to Paris!

2. There can be lines even for churches

The Notre Dame is one of the top things to see in Paris. That means the line curves and bends around a whole square and is full of people distracted by the sights around them. We couldn’t actually make out the end of the line in the first place, so we were waved in when standing by the entrance instead. Many of the top things to do in Paris have long queues, but it is possible to skip the line for some!

The French Gothic architecture inside the Notre Dame is worth it whether you wait or not!

It’s a long walk from the Gare de Lyon to the Eiffel Tower. Quite long. Veeery long. Pretty much your entire day long. But a day spent on your own walking tour in Paris is not a bad one especially with everything to see on the way:

4. The line for the Louvre is really big

Enter through the Metro Station. The line outside the Louvre is just slightly insane, and for some reason people still line up there even though the line through the Metro station is almost non-existent. I’d also recommend buying your tickets online.  I treat museums a bit like speed dating – Get in, find out what I need to know, and get out. If you want to spend longer in one of the top museums in the world and a Paris landmark, you don’t want to waste your time in the line!

5. The line for the Catacombs is bigger

Line up for the Catacombs early (unless you can figure out the French website).  Only a certain number of people can be within the Catacombs at one time. We arrived just before 9:00am to make it in the first group.

What are the Catacombs? They are underground historical mines, now lined with the remains of over six million people. A chief mine inspector had the bones arranged in the way they are displayed today –  walls of similar bone types stacked together and in artistic patterns. Eerie, but fascinating.

6. Maps are useful, even at a cemetery

The first half of this is not a new lesson. I’ve always had some kind of aversion to maps. It’s not that I don’t like them, it’s that I never seem to have one when I need it, or I have some kind of inadequate photo of one that doesn’t help in the slightest.

Lesson learnt once again at the Pere Lachaise cemetery. It’s so much bigger than I thought and there are so may graves to go and see, if you’re into that kind of thing. Jim Morrison, Chopin, Oscar Wilde, Paris seems to be the burial place of choice for artists.

Be sure to look up some of the great guides online to see if you want to go to Pere Lachaise, and PRINT THE MAP.

7. Paris is full of tasty things

Eat the pastries. Every. Single. Day. And every other kind of French food you can get your hands on. Croissants, chocolate mousse, eclairs, brie and camembert cheese, some of the best food comes from France and you can EAT IT ALL.

Even cheese on toast tastes better in Paris, and it has a much fancier name –  Croque Monsieur.

Stopping for a French hot chocolate in the Latin Quarter of Paris is an excellent decision. Best hot chocolate I’ve ever had. Like smooth melted chocolate, but somehow not too rich. A-mazing.

9. Tasty things in Paris are expensive

When you’re at a cafe and they come around with a tray of the most delicious looking cakes and pastries you’ve ever seen, the macaroon is probably not the best choice for those on a tight budget.

10. Weird things are tasty in Paris

That you can get frogs and snails on the menu in France is probably one of the first things I learned about the country as a child.

Turns out snails taste somewhat like mushrooms and mussels with a whole lot of butter and garlic. I thought they were great! So great I bought some at the supermarket and google translated the directions on how to cook them in our apartment.

11. Tasty things in Paris can be smelly

That awesome cheese I mentioned before? It’s a little smelly. In an “Ok who farted?” every time you open the fridge kind of way. It may stink, but it’s also some of the best cheese I’ve tried, and melted on the aforementioned fresh croissants from the bakery around the corner is even better.

12. Paris is still the home of artists

Get lost in Montmartre.

Start at the Sarce-Coeur, another top spot in Paris so generally crowded (and avoid the bracelet men who want to put bracelets on you then ask for money). Watch artists paint in the square and duck into small cafes with piano players and fresh crepes.

The street heading down from the top of the hill had the most amazing food shops. Cheese, pastries, cakes, I could have eaten my way down the whole thing (I might have).

13. Some things are better in the movies

After winding your way down the narrow streets from the Sacre-Coeur you will find yourself back on main roads, and the modern day, with neon signs and sex shops galore.

What else could be in this area but the Moulin Rouge?

A little sadly, the Moulin Rouge isn’t as fantastic as I thought it would be. After learning the entire melody from the Moulin Rouge movie at 13 and falling in love with Ewan McGregor (maybe a subconscious reason I moved to Scotland?) it was still exciting to see, if a bit less spectacular than I would have imaged.

14. There are free things in Paris

Many of the museums and monuments in Paris can be visited for free at certain times. One of these is the first Sunday of every month, which fortuitously for us was when we were there!

It was the perfect time to go up the Arc de Triomphe, having decided earlier to not go, because it turns out the ticket counter causes the queues!

Not specific to Paris, but before you use the toothpaste in your Dad’s toilet bag, check it’s toothpaste. Sometimes it’s deep heat trying to look like toothpaste. Deep heat on your tongue does not feel nice and does not wash off so well.

My knack for doing ridiculous things isn’t confined by borders.

Living abroad is one way to keep travelling long-term. Paris is expensive, but I can imagine it is one of the most amazing cities in the world to live in. The city itself plus the opportunity for travel! You will need the rights to work in the EU or France, and if you’re under 30 a working holiday is a great option, or you could look into being a nanny. Some knowledge of French may be required but what an awesome place to learn right?!