The following is a guest post about spending 2 days in Milan by Nina, cosmopolitan vegan traveller who was raised in Germany but has been living in Greece for almost 6 years. She is the voice behind Lemons and Luggage, a travel blog dedicated to illustrating the diversity in travel and offering an alternative perspective to male-dominated travel content creators.

Italy is one of my favourite countries in the world, but there are some important things to know before travelling there. For one, it’s an extremely diverse country. So Milan will be different from any other Italian city you may have visited before.

Milan is perhaps the most fashionable city in all of Italy. And that’s not easy in this stylish country! Milan’s inhabitants, its architecture, its sights – they all ooze elegance. As one of the wealthiest cities in Europe and global fashion capital, it’s a very cosmopolitan city with a lifestyle that’s quite distinct from the rest of Italy. The city is home to various sights, both old and new, that are well worth visiting. But it takes some exploring to see past the glamorous shop windows and discover the quirkier side of Milan. If you spend your two days in Milan wisely you’re sure to fall in love with the city. 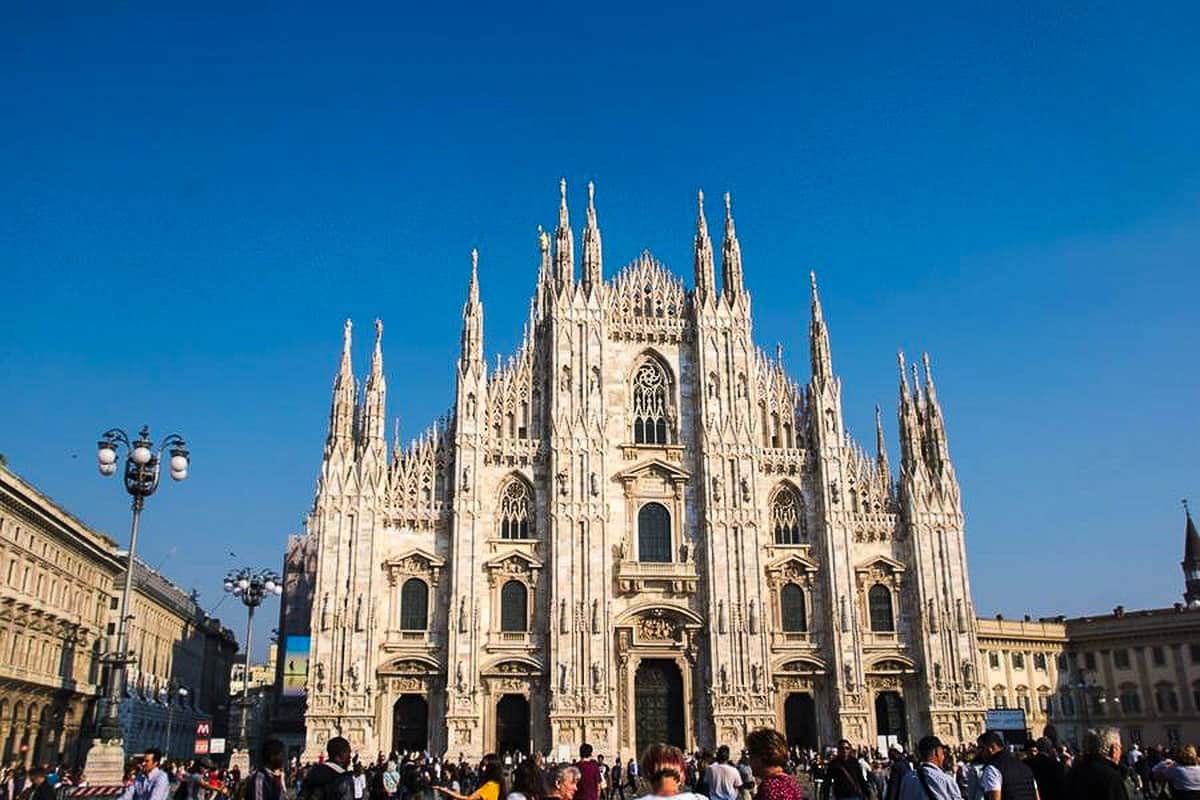 And while 48 hours in Milan is never enough to explore such a big city it’s the perfect amount of time to introduce first-timers. Whether you’re a solo traveler or going to Milan with friends, family, or your partner, this two-day itinerary is the best way to discover the city.

How to get to Milan

Getting to Milan is easy. There are three international airports less than 50km from Milan. Malpensa and Ligate are its main international airports. But the airport in Bergamo is gaining popularity with travellers of budget airlines. Linate is close enough to be connected to the city’s public transport. And from Malpensa airport or Orio al Serio airport in Bergamo, you can take shuttle buses.

If you’re already in Italy, you can also reach Milan by train. The fast trains are an excellent and efficient way to get from city to city in Italy.

What to do in Milan in 2 days

Although Milan is not as popular with tourists as other Italian cities there is quite a lot to see and do, and trying to see everything in Milan in two days will be difficult. But there are some things that you should absolutely see and experience during your time here.

Milan’s most popular landmark is its Cathedral. It’s one of the largest churches in the world and took nearly six centuries to complete. Due to this long building process, the cathedral combines various different styles.
The Milan Cathedral is a very impressive building and provides tons of photo opportunities. You will want to take pictures in front of the church but also on top. Wait, what? Yes, you can actually visit the rooftop of the cathedral. And while the inside is extremely stunning and deserves a visit during your two days in Milan, it’s the rooftop that steals the show. From here, you have a fantastic view of Milan. And despite being in the centre of such a bustling city, the rooftop is an oasis of peacefulness. 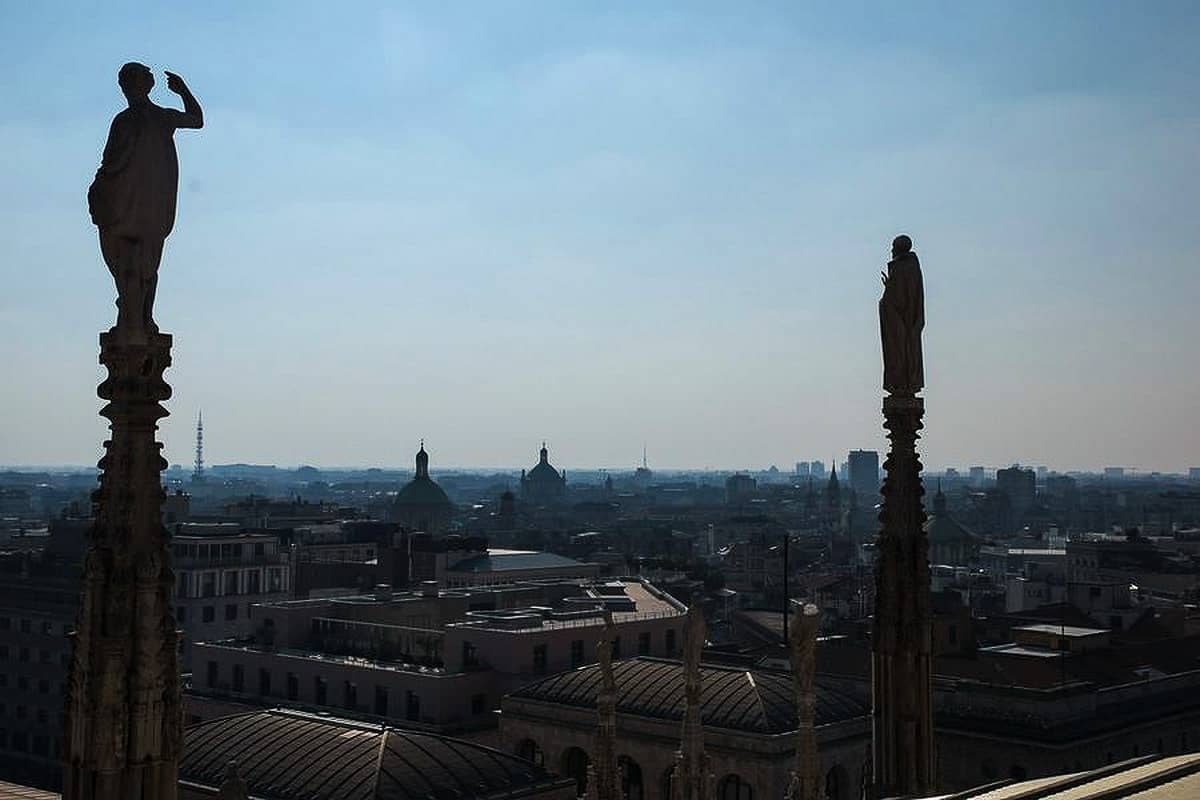 Next, you will want to see the beautiful Galleria Vittorio Emanuele II which is just next door. This is Italy’s oldest and classiest shopping mall. And even if you don’t want to buy anything in this upscale mall, you will appreciate its beauty. The stunning glass dome and the gorgeous mosaic floor will be one of the highlights of your two days in Milan. 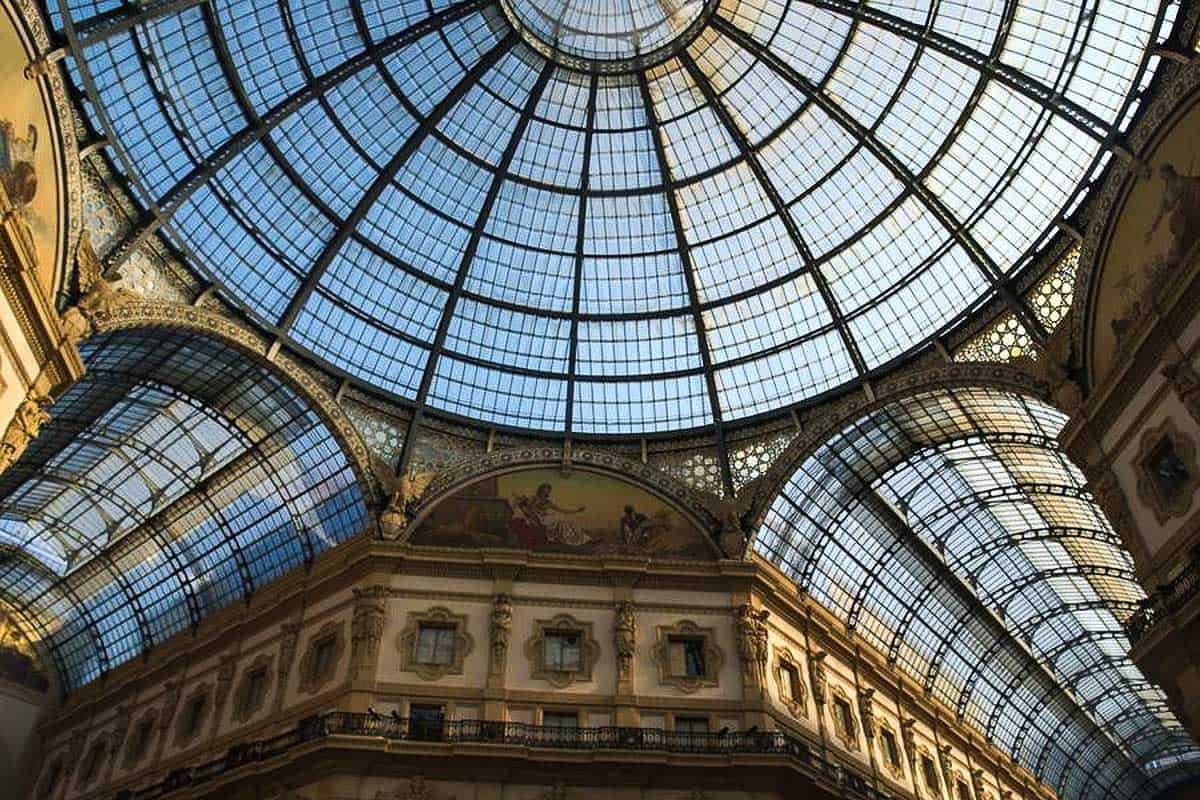 Not far from here, you will find the Scala, one of the most famous operas in the world. You can even do the museum tour to see the interior.

If you want to see one of the actual performances you should get tickets early as they can sell out quickly. Watching a performance in the same opera where composers like Puccini and Verdi worked would definitely be one of the top experiences during your trip.

Walk Via Dante to get to Sforza Castle and Parco Sempione

You can now make your way to Via Dante, the most glamorous shopping street in Milan. For those who can’t afford to buy anything here, the architecture along this street is still worth seeing.

For a different side of Milan, head to the canals in the south of the city. The Navigli district houses many shops, bars, and cafés. Weekend evenings get super busy here as it’s one of the best spots to experience the Milanese nightlife.
But as the Navigli are a 30-minute tram ride from the city centre, with only two days in Milan, you may have to choose between experiencing the area by day or night.

Now, if you want to see something less touristy but still quite impressive, you must check out the church San Bernardino alle Ossa. This church has a small chapel which is decorated with many human skulls and bones. Quite an eerie sight, similar to the Catacombs of Paris, but much smaller. 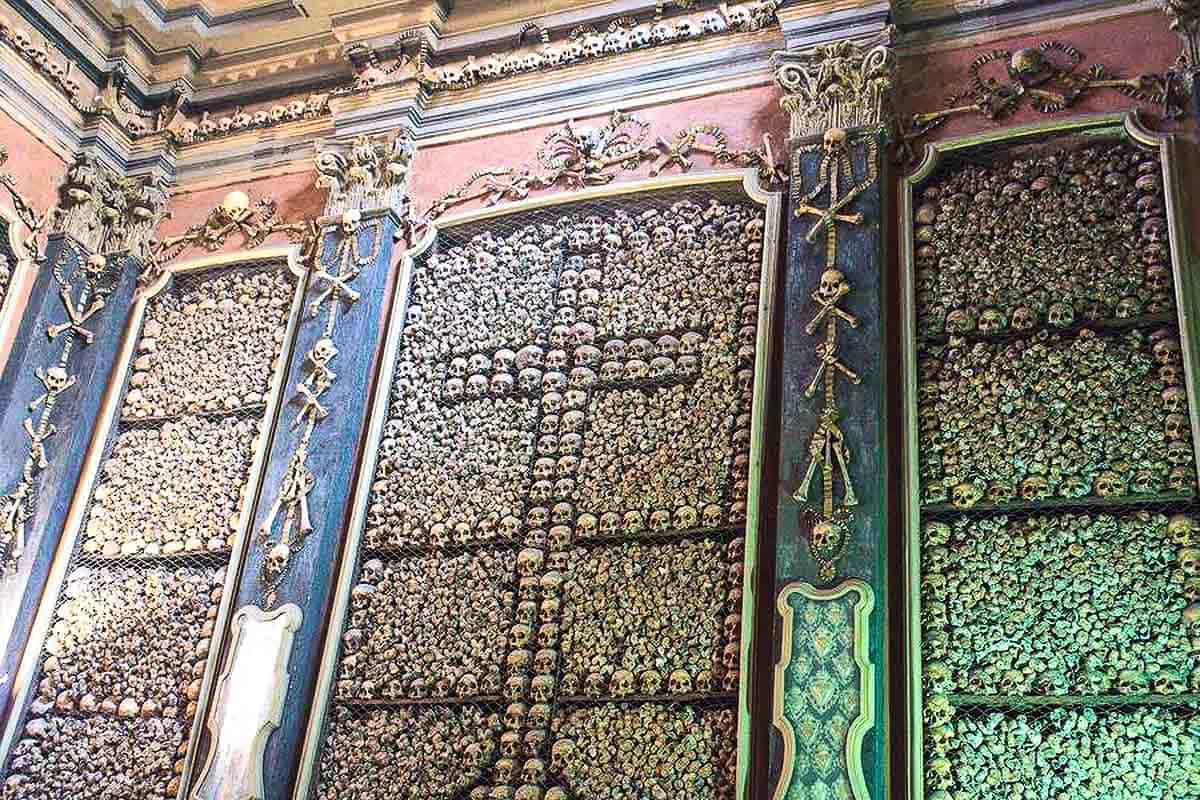 Try to see the “Last Supper” by Leonardo da Vinci

If you want to see the painting and the church during your two days in Milan it’s imperative that you book tickets months in advance. After all, this is one of the most famous paintings in the world, and everyone wants to see it. If you don’t get tickets early enough there are still some tours that will allow you to see the painting, but you will have to spend around €70. So book early!

Where to eat in Milan

Tourists don’t think of food when people mention Milan, but there are a lot of traditional dishes that you can find in Milan. And even foods like pizza which is originally from Naples can be really good in Milan.

As in most cities, it’s best to avoid restaurants in the very touristy areas like around the Cathedral. They are expensive, and the quality is subpar. You’re better off exploring some of the side streets or eating in the Navigli district.

Being such a modern city, it’s also fairly easy to find vegan restaurants in Milan. So if you’re vegan you definitely won’t starve during your two days in Milan. 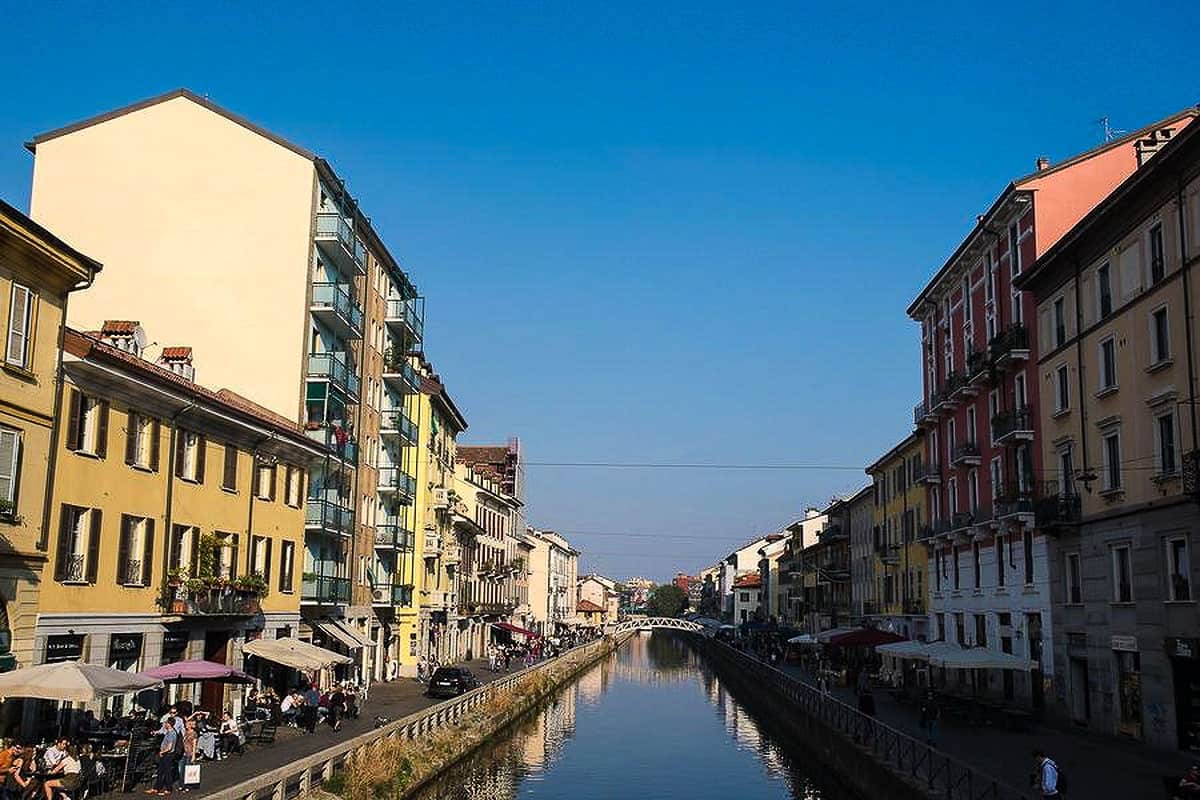 Where to stay in Milan

With only two days to explore Milan, you’ll think of staying in the historical centre. But with the excellent public transport system, you can actually save a bit of money if you stay in the northern part of the city. Even an Airbnb in Zona Zara will allow you to get to the Cathedral in under 15 minutes.

So instead of just looking at how close to the centre you want to stay, make sure to find accommodation near a metro stop.

Lake Como is one of Italy’s most popular destinations and is only 40 minutes by train from Milan’s central station. If too much time in the city isn’t for you then you’ll love the natural beauty of Lake Como. You can take boat tours here or go hiking.

If you’re into racing, you may want to go to Monza which is just 15 minutes by train from Milan. This is where the Formula 1 Grand Prix takes place. And if there is no race when you visit you can even try racing yourself!

For those flying into Milan via Orio al Serio airport near Bergamo, it might be worth taking some time to explore the town of Bergamo itself. It’s actually a very picturesque city and quite underrated due to the fame of Milan.

Milan is well worth a visit. It may not have the ancient sights that Rome has or the charming architecture of the smaller Italian towns. But Milan is a modern, cosmopolitan city with a very unique character and plenty of things to see and do.

Of course, with only two days in Milan, you may not have seen everything in Italy’s second-largest city. But you now have an overview and can always come back to explore more! 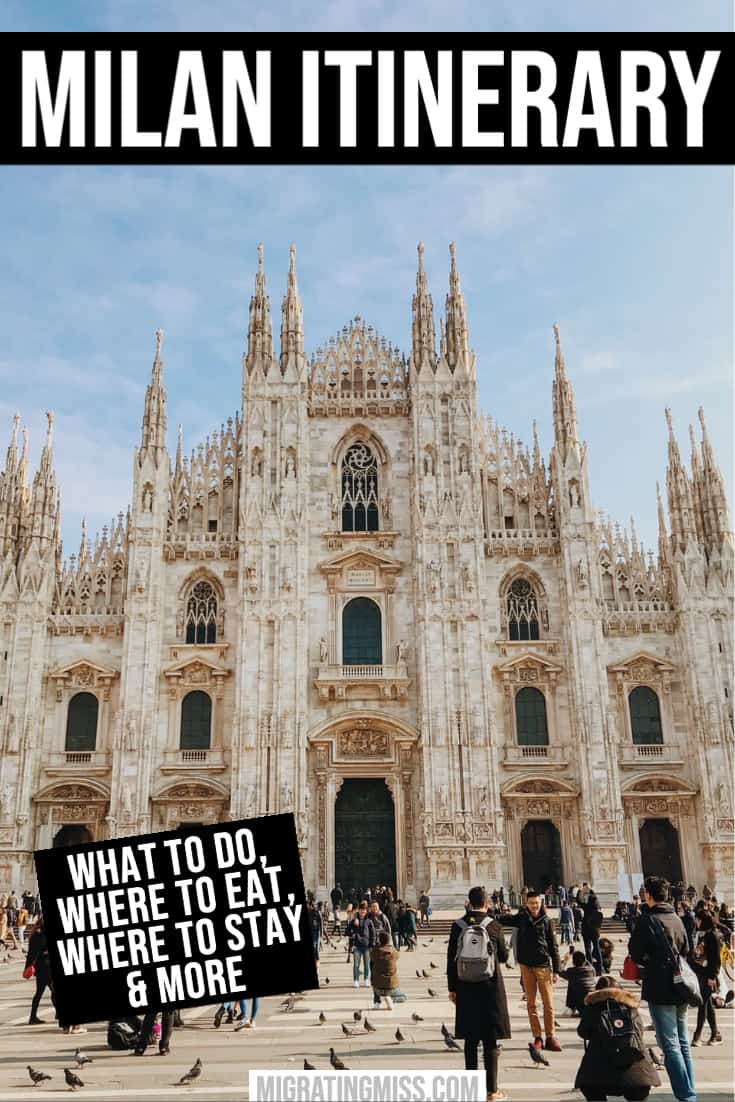