The following is a guest post by Andrzej & Jolene from Wanderlust Storytellers, a widely successful family travel blog. They love sharing their passion for travel with people all around the globe.

Just two days in Sydney is hardly enough to cover everything there is to see and do in one of the world’s most gorgeous cities. Cities such as New York and London are glamorous, grandiose and historical, whereas cities such as Vancouver, Seattle, Auckland and San Francisco have gorgeous natural harbours. On the other hand, Sydney goes a mile beyond these cities in the sense that it manages to uniquely combine big-city elegance with luxuriant nature, as well as glorious harbours.

From its stunning beaches and harbors to its cool bars, wonderful brunches and captivating foodie environs, spending two days in Sydney will surely be an extraordinary joyride for your senses. 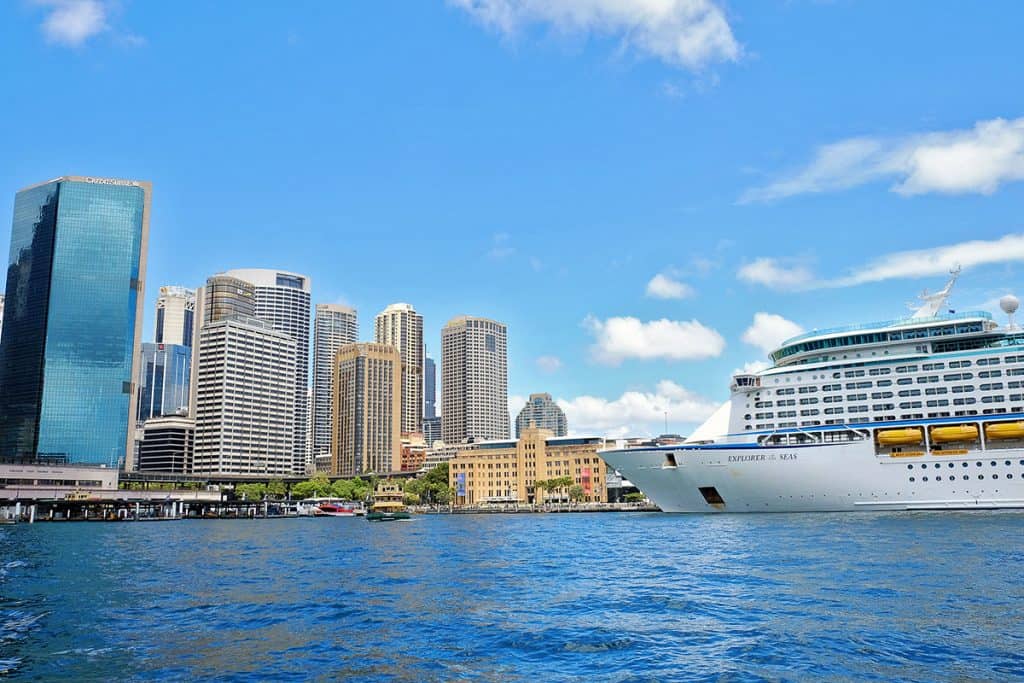 How to get to Sydney

Unless you are an Aussie or happen to come from New Zealand, going to Sydney is unquestionably a very long, long trip. Fortunately, Sydney Airport is located a mere 8 km (5 miles) from the Central Business District (CBD). It takes around 25 minutes of driving in light traffic to get from Sydney airport to the city center and probably to the hotel to freshen up after a long flight.

You can choose to use taxi services, which may cost $45-$55 one way, or access the city center by taking Sydney’s Airport Train. Commonly known as the Airport Link, it’s fast, convenient and links Sydney Airport with the CBD in only 13 minutes! Better still, the trains come about once every ten minutes. The station is situated at the northern end of the airport and is accessible from the Arrival terminals. Other modes of transport include shuttle, bus or rental car. Nonetheless, catching a train is the most economical way to reach the city center, as well as Sydney’s suburbs, especially when you’re just in Sydney for 2 days.

What to Do in Sydney in 2 Days

It can take you around 20 minutes to walk through the Sydney CBD (Central Business District). Starting from Georges Street, you can go from Circular Quay to Central Station. There are daily free tours with a guide at either 10:30 am or 2:30 pm, beginning at the Town Hall just next to Ancre Sculpture. The guide will walk you around the city while telling you tales and history of some of the most famous places such as The Rocks and Harbour Bridge.

You can also consider Hop On Hop Off tour buses, which offer a 35-stop tour at a cost of around $22.50. These are two-story buses that enable you to sightsee the city from above while giving you the option of stopping whenever you feel like. 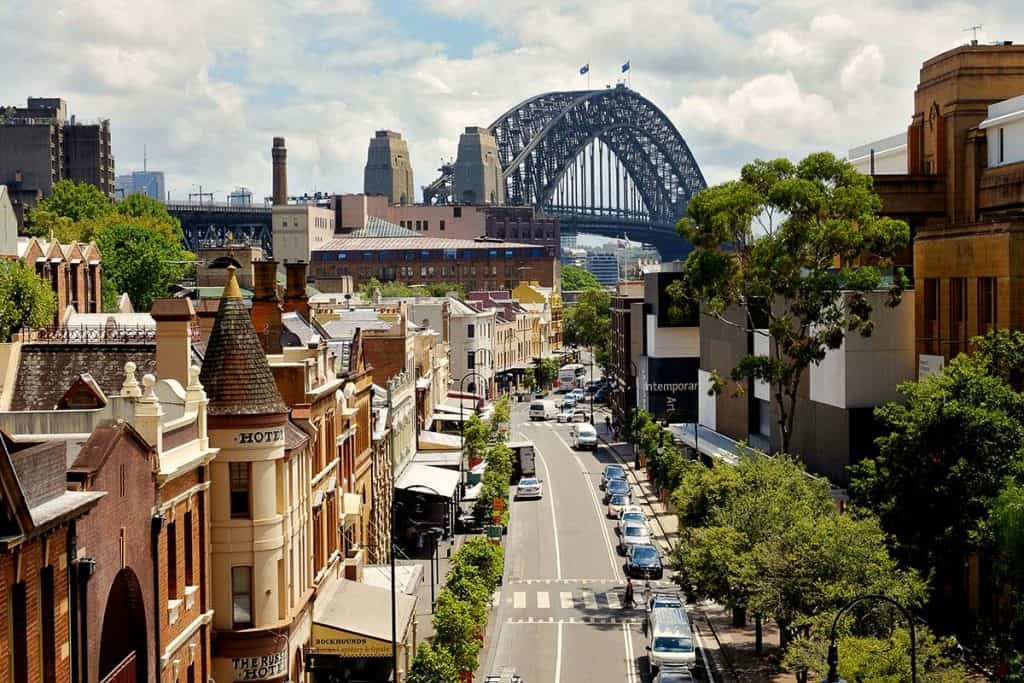 Located in the heart of the city center, Sydney Tower presents an impeccable 360 view of the city and its surrounds. For around $18.55, you can enjoy the incredible views all the way to the Blue Mountains. There’s even a revolving restaurant if you want to end your day here.

As a UNESCO World Heritage Site, Sydney Opera House is undoubtedly one of the city’s most iconic monuments. Built as an important theatrical and musical center, it was opened in 1973 by Queen Elizabeth II after being built for 14 years and somewhere you must stop on your two day Sydney tour, even if only to see the outside! The view over towards the Sydney Harbour Bridge from there is also worth a look, and there are plenty of places to eat and drink around here, although they may be on the more expensive side. 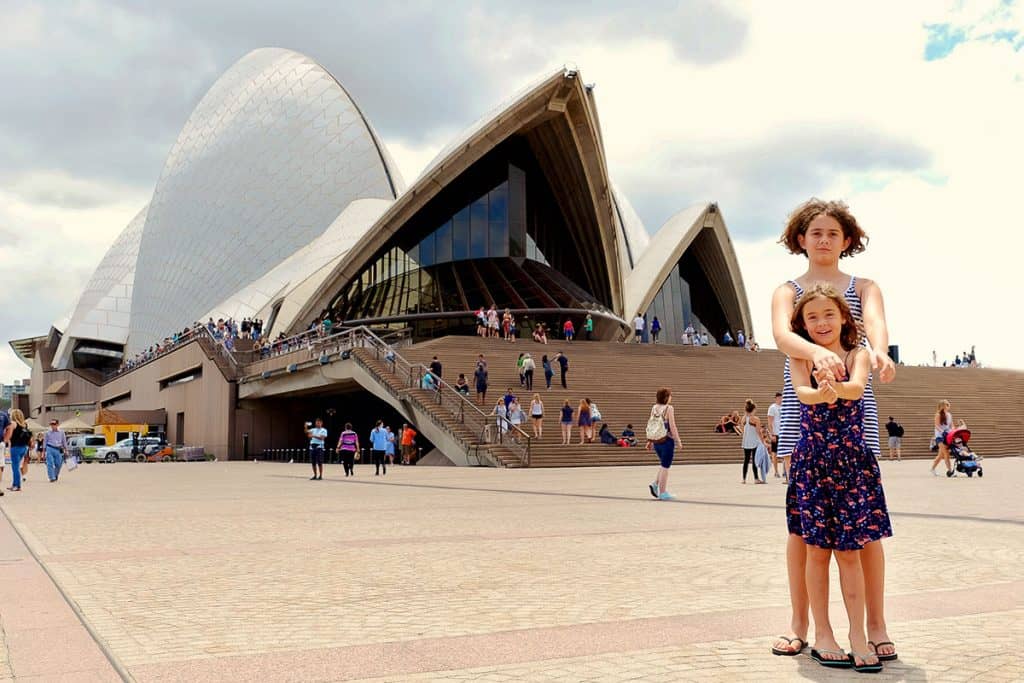 Start the second day of your 2 day Sydney itinerary in Darling Harbour. Since 1788 when the first Governor of New South Wales, Arthur Phillip described Darling Harbour as the world’s most beautiful harbor, Darling Harbour has truly kept its unmatched charm. Visit and you’ll admit that Darling Harbour is a truly magnificent territory.

Sydney Aquarium – With over 10,000 marine creatures from over 600 different species, you can’t actually lack anything that captivates your imagination at the Sydney Aquarium. For about $40, you’ll be visiting one of the world’s most incredible aquariums.

Chinese Garden of Friendship – Open every day for $6, you can relax at this authentic Asian garden and enjoy its innovative architecture and down some sweet Chinese tea at the garden’s famous teahouse. 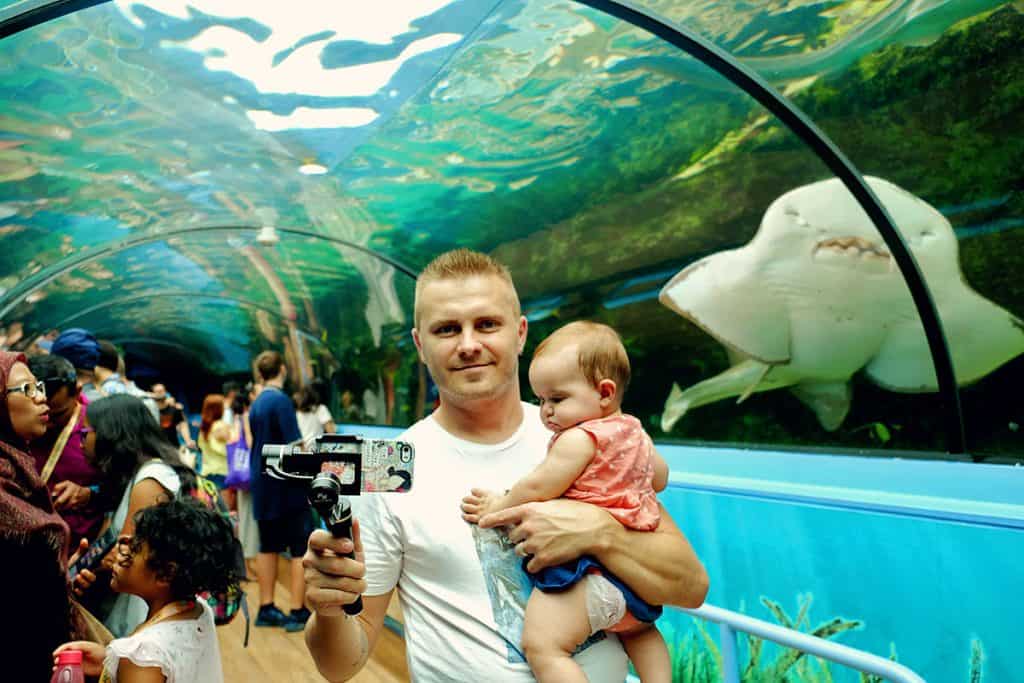 Located just a few kilometers to the east of Sydney, Bondi Beach is one of the most special and famous beaches in Sydney. It is not only a meeting point for hipsters, surfers, and young travellers but is also one of the best places to sunbathe, surf and enjoy the ocean’s calming effects. You can learn to surf at Bondi Beach with many schools in place to teach you a thing or two about surfing at a fee.

You can also take the spectacular cliff walk from Bondi Beach to Bronte (or Coogee) while enjoying the amazing views of the iceberg pools. It wouldn’t be a trip to Sydney without a visit to Bondi Beach, so you have to squeeze it into your 2 days in Sydney somewhere! 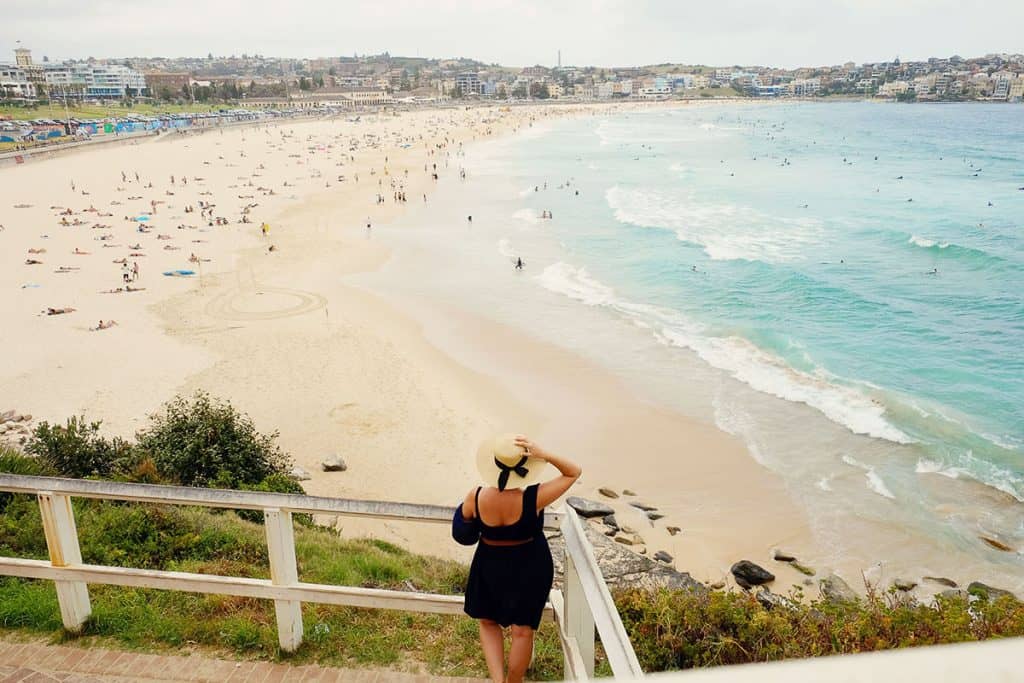 Known for its nightlife, spending the evening at Kings Cross will show you another side of Sydney. In addition to bars and nightclubs that fill the area, Kings Cross comes to life at night with all types of people ready to party the night away.

Where to stay in Sydney

The hotels in Sydney are spread across the city, but if you’re only in Sydney for 2 days you should choose your hotel from the city’s main accommodation hubs. We recommend you stay either in The Rocks or close to the Sydney Opera House. Whilst we enjoyed a stay at Holiday Inn The Rocks, you might like to treat yourself to more luxury at one of these 5-star hotels. 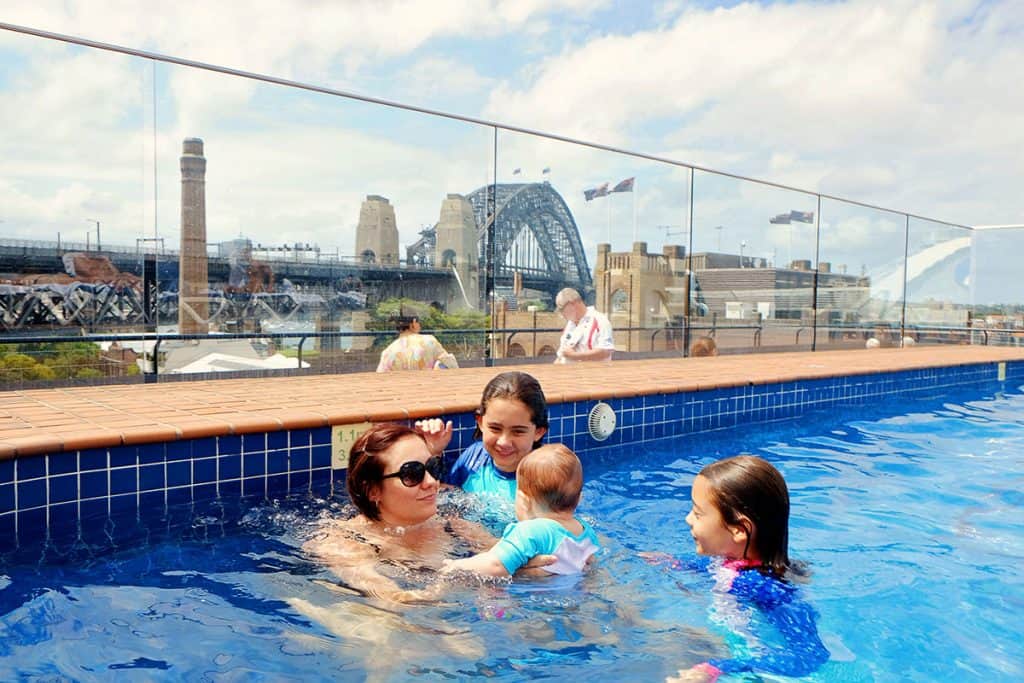 Places to Visit after Sydney

Australia is certainly a vast and beautiful country. After 2 days in Sydney, you can consider jetting off or jumping on a cruise ship to the Great Barrier Reef. With over 2,900 reefs, this paradise of 900 islands is famously known for having the largest coral reef system in the world. Covering more than 2,300 kilometers, the Great Barrier Reef is impressively striking. As one of the seven wonders of the natural world, the Great Barrier Reef immensely dwarfs the Great Wall of China and is the only living substance that can be seen all the way from space.

It’s quite easy to see that Sydney is one of the best places to visit in the land Down Under. It brings so much to the table that you’ll want to stay much longer than just two days, but if two days in Sydney is all you have to begin with, just make the most of it! 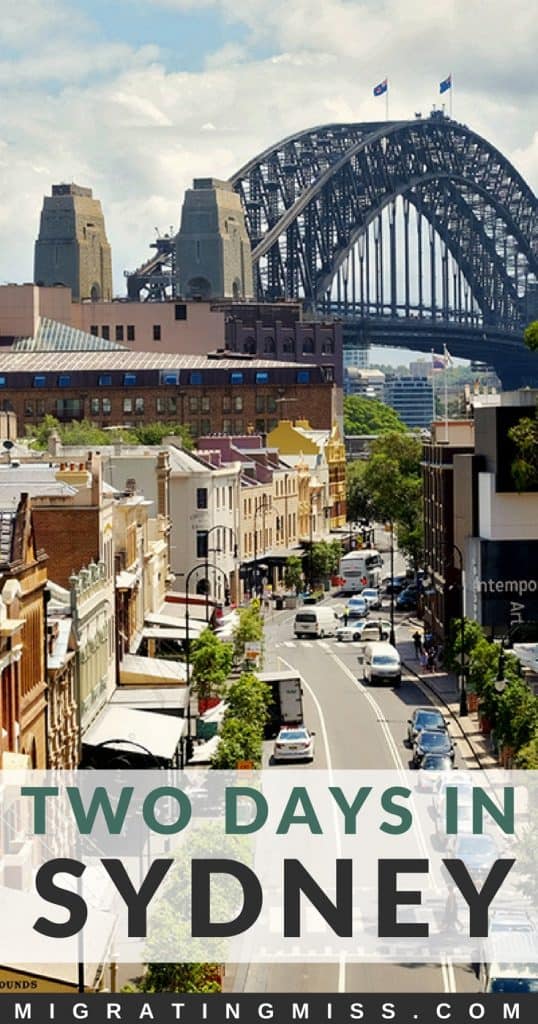 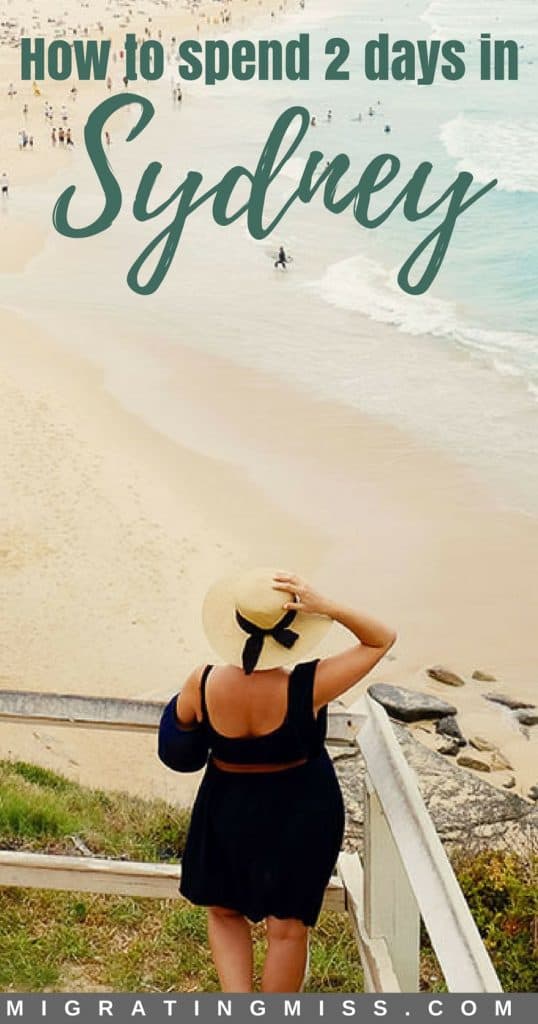