The following is a guest post about spending 3 days in Copenhagen by Chrissy from Travel Passionate, a travel blog about luxury and cultural experiences around the world.

Copenhagen, the capital and largest city in Denmark, grew from its modest Viking fishing village origins into a vibrant and cultural powerhouse over the centuries. Known for icons such as the Little Mermaid, Christiansborg Castle, and Tivoli Gardens, Copenhagen is a city rich in history, trade, defence, and culture. The city is big enough to boast world-class museums, and Michelin starred restaurants, yet small enough that you don’t feel overwhelmed by all there is to do. Three days in Copenhagen allows you to get a feel for this hip city and all its many facets. Read on for my Copenhagen itinerary, which will surely give you plenty of ideas. 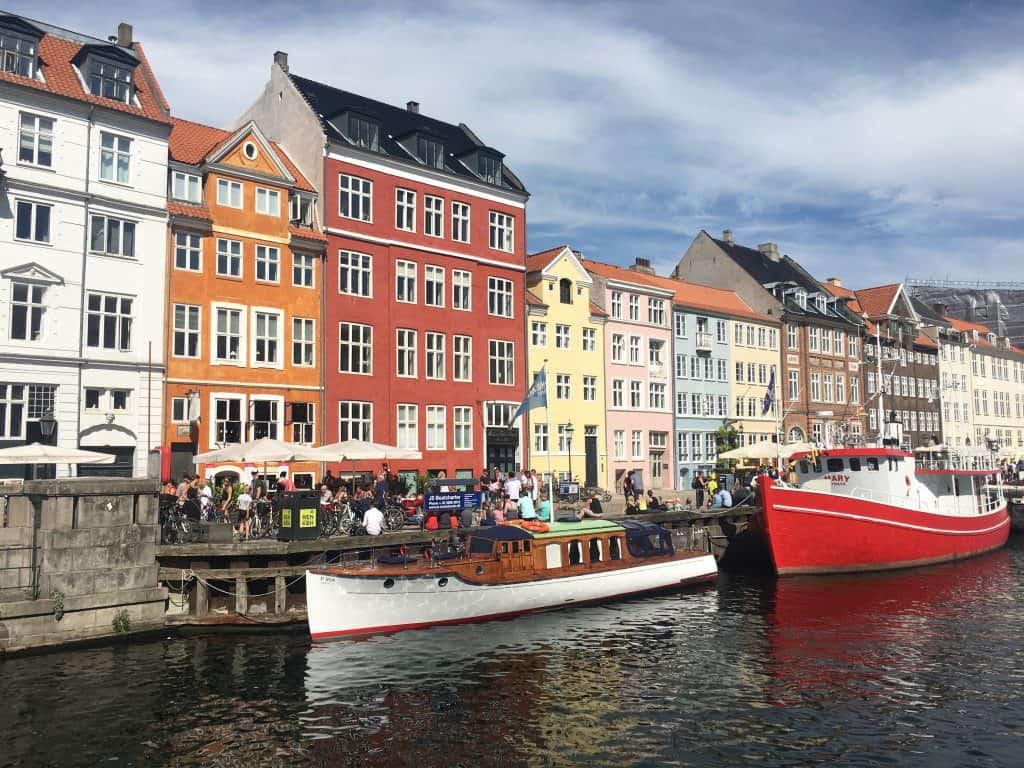 How to Get From/To Copenhagen Airport

Copenhagen Airport is located only 7km from the city centre, and it’s very easy to get to and from the airport. The fastest and most cost-effective way to get from Copenhagen airport is by metro or train, as they only take 15 minutes. The cheapest way, however also the most inconvenient, is to take the bus, which takes 35 minutes to get to the central station. The most expensive way is a taxi or private driver but will get you door to door.

Rosenborg Castle and the King’s Garden

Rosenborg Castle was built in the early 17th century as the summer house for Christian IV and was used as a residence for about a century. It was built in the Dutch Renaissance style and expanded a few times. Of particular interest is the Long Hall, where visitors can see a beautiful stucco ceiling with various frescoes, tapestries that depict wartime victories, and the coronation chair. The Danish Royal Collection is also housed here, which includes the Danish Crown Jewels, Crown Regalia, Coronation Carpet, and Throne Chair.

The King’s Garden, or Kongens Have, is the large garden surrounding the castle. It is the oldest public park in the city, having been established alongside the castle as its private gardens. The early garden featured practical gardens for the kitchens along with flower beds and more. Visitors to the gardens can also find the Rosenborg Barracks and Commandant’s House.

The castle is open to the public with tickets while the garden is open to all. 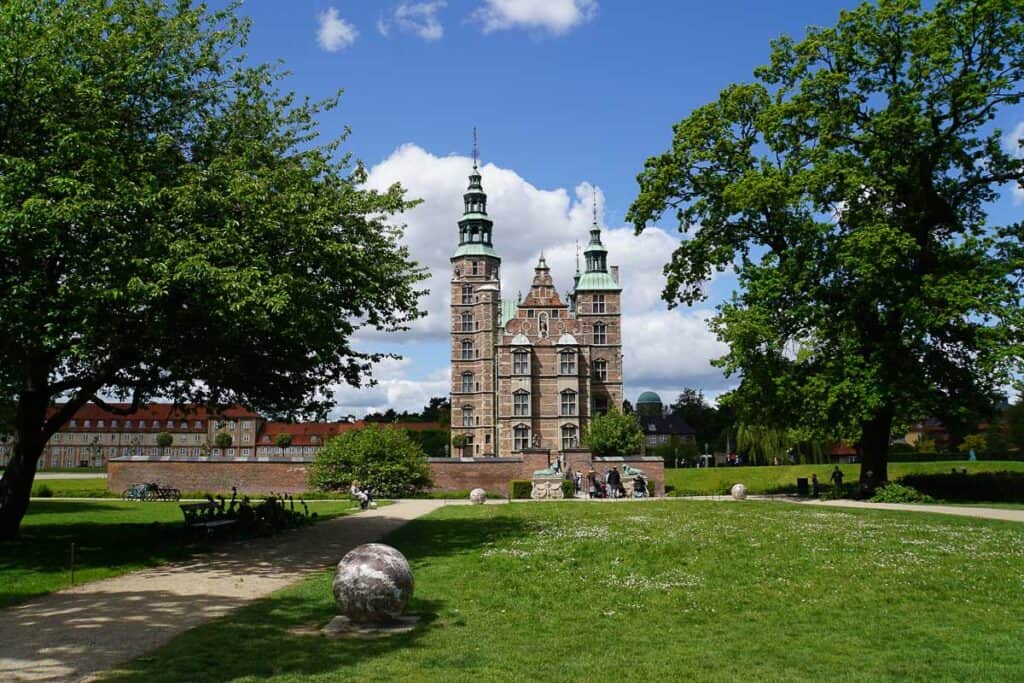 The 17th-century Rundetaarn, or Round Tower, is located in the centre of Copenhagen and was built by Christian IV as an observatory. It is the oldest observatory in Europe and also offers exceptional panoramic views of the city.

Built-in the 18th century, Christiansborg Palace replaced Absalon Castle and Copenhagen Castle as the primary royal residence, parliament, and administrative offices. It is located on Slotsholmen, one of the islands in the heart of the city, and is not the first castle on this site. The first two, Absalon and Copenhagen, were built in 1167 and 1369, respectively, and in 1731 Copenhagen Castle was destroyed in order to build the first Christiansborg Palace. Visitors can see the Royal Reception Rooms, Parliament Wing, Palace Chapel, the Marble Bridge, and the Tower. It is also possible to see the ruins of both Absalon’s and Copenhagen Castle. 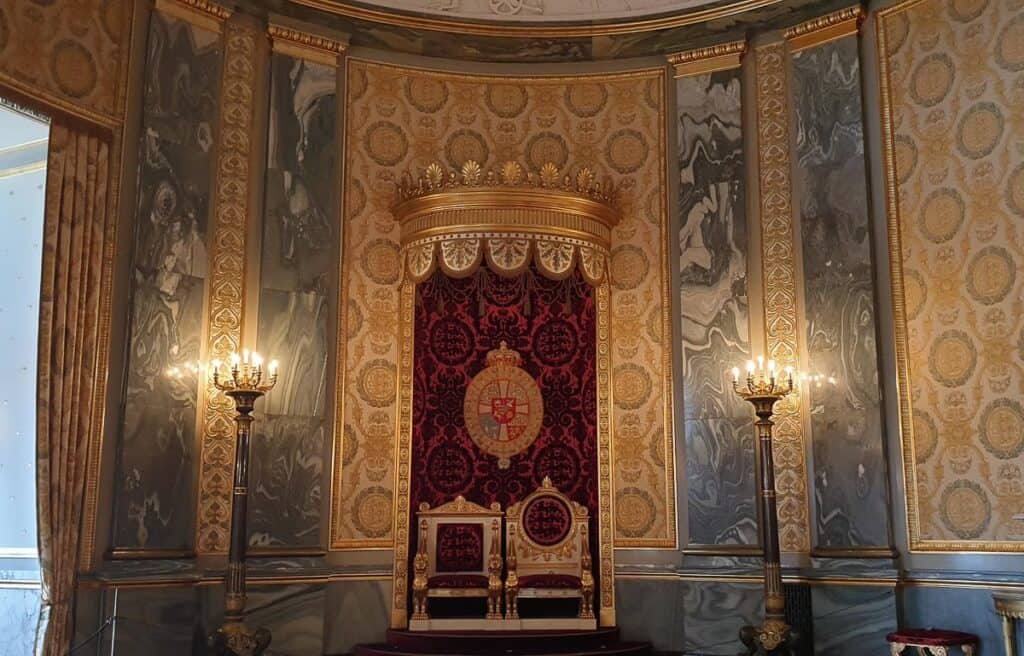 The National Museum of Denmark

This museum of cultural history in Denmark is a rich collection of Viking artefacts, art from the Middle Ages, and stories of the Danish people. The museum documents 14,000 years of Danish history, from the Ice Age to modern-day. One of the most evocative displays is the Egtved Girl, a young woman who was found in a tree trunk coffin in 1921, though her burial dates back to 1370.

Copenhagen, like Amsterdam and Venice, is lined with canals dating back to the 17th century and Copenhagen’s golden age. And while the city is easy to explore on foot, you’d be doing yourself a disservice if you didn’t also take time to see the city from the water’s edge vantage point. Canal tours leave from Nyhavn and Gammel Strand. Some of the iconic sights you will see include the Little Mermaid, Christiansborg Palace, Amalienborg Palace, and the Copenhagen Opera House, among others.

Amalienborg Palace & the change of the Guards

Amalienborg Palace is the home of the Danish Royal Family and is located between the city centre and the harbour. It was built in the 1700s and is comprised of four different identical buildings around a central courtyard. These are the homes of various family members, and only a few buildings are open to the public. In Christian VIII’s palace, you will find the museum, which highlights the lives of the royal family, showcases some of the beautiful interiors in the palaces, and introduces visitors to the daily life of the Danish monarchy.

The Changing of the Guards happens every day at noon when Den Kongelige Livgarde march from the barracks at Rosenborg Castle through the streets to Amalienborg Palace for the traditional ceremonial handover. 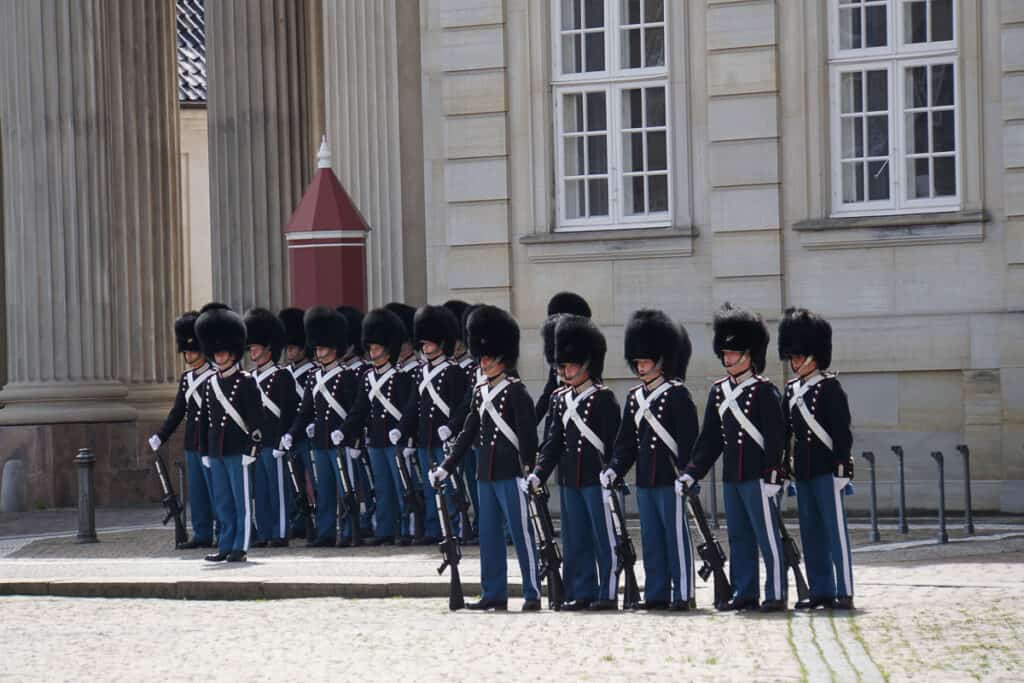 If you are interested, you’ll pass by Freetown Christiania on the way to your next destination, the Chruch of Our Saviour. Freetown Christiania is a former military base that was abandoned for a number of years before it became a commune, started by hippies in the 1970s. Around 900 people now live there under the rules of the commune, rather than Danish Law. You’re free to wander through the area (no cars allowed) and it is full of shops, stalls, and eateries. Photographs were forbidden although this has been relaxed in more recent years, but you should still always ask for permission to photograph people.

Church of Our Saviour

The Church of Our Saviour is a beautiful Baroque church in the centre of Copenhagen, known for its Tower with an exterior staircase which offers panoramic views across Copenhagen. The bell tower, which is the largest carillon in northern Europe, peals every hour during the day. 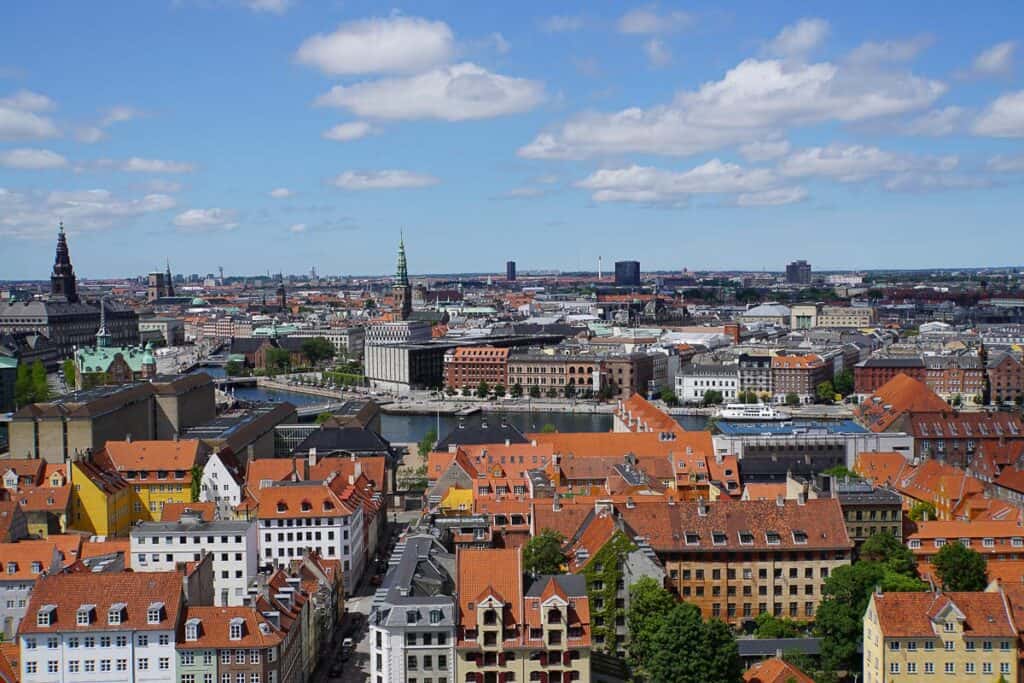 Nyhavn Harbour is a 17th-century commercial port, home to sailors, brothels, merchant houses, warehouses, and more. Today, it is a bustling entertainment district with restaurants, shops, and bars, and plenty of people. It is a great place to end a day of sightseeing.

On day three of your Copenhagen itinerary, you can take the opportunity to get out of the city and see more of Denmark with one of these two day trips from Copenhagen, or you can visit the Tivoli Gardens.

Frederiksborg Castle is located in Hillerod, about 30 minutes north of Copenhagen. The castle is built on a small island in Slottsoen, or Castle Lake, and dates back to the reign of Christian IV, in the early 17th century, although the first castle built there was around 1560 by Christian’s father, Frederick. This was the first Danish palace to be built inland, and also the first to be built entirely for pleasure. Christian had the entire castle rebuilt during his reign. Be sure to see the Neptune fountain in the forecourt, designed by Adrien de Vries in the 1620s. The fountain is considered to be a sculptural masterpiece which symbolises Denmark’s position as a leading Nordic power in the early 17th century.

Kronborg Castle is also north of Copenhagen, this time along the coast at the narrowest point where Denmark curves from the Baltic Sea into the Oresund. It was the inspiration for the castle in Hamlet and is one of the most famous castles of the Danish Renaissance. The earliest castle here dates to 1420, but the magnificent Kronborg wasn’t built until the 1570s when it was transformed by King Frederick II into the Renaissance palace we see today (although the castle burned in the 1620s and was rebuilt). 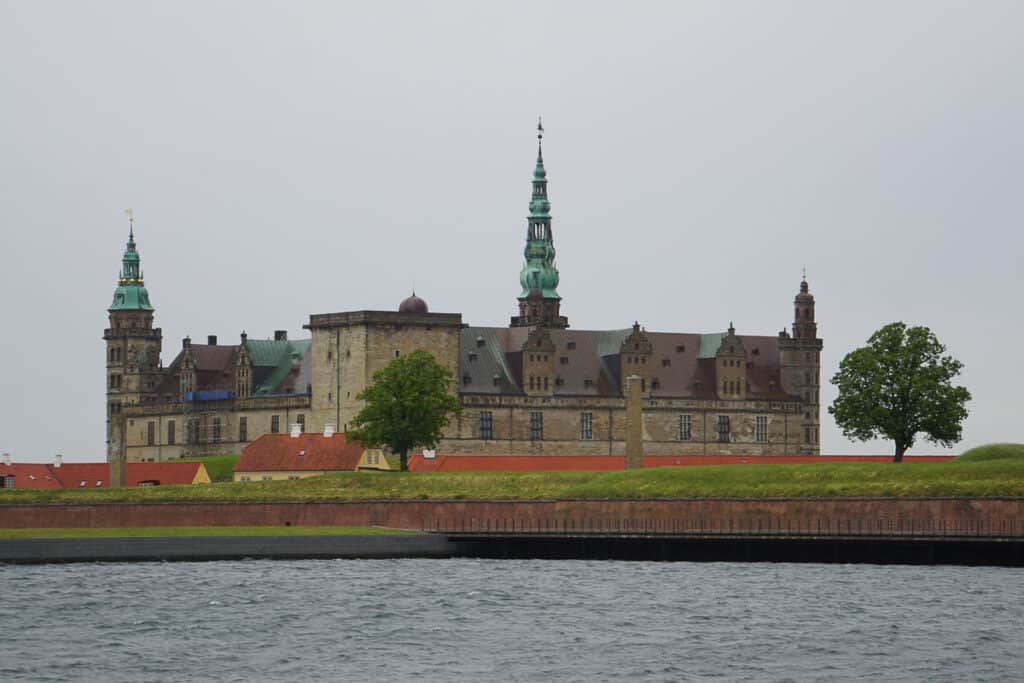 Tivoli Gardens is the second oldest amusement park in the world, located in downtown Copenhagen, and a definite must-do for a day in the city. The amusement park celebrated 175 years in 2018, yet you’ll find plenty of modern-day rides. Tivoli Gardens may best be known for the Rutschebanen, one of the world’s oldest operating wooden roller coasters. 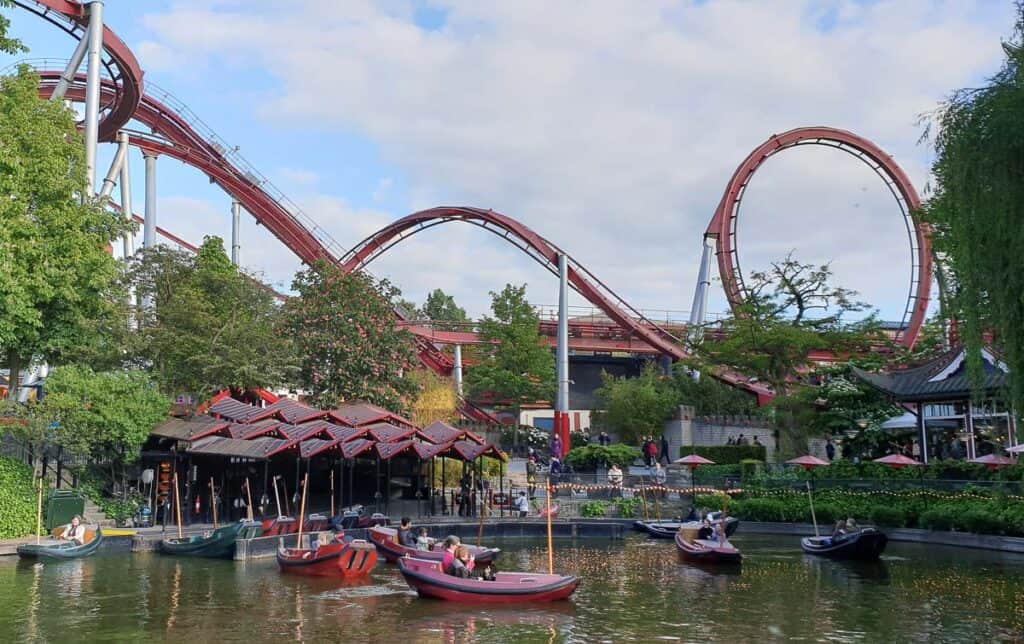 What to Eat in Copenhagen

Copenhagen is a food lover’s paradise! Be sure to spend time trying some of the many delicious foods on offer in Copenhagen, from Smørrebrod to wienerbrød.

Wienderbrød is as close as the Danes come to producing what we think of like a Danish pastry. It’s a flaky dough that melts in your mouth, filled with a sugary buttercream and topped with almonds. The perfect pastry to go along with your morning coffee!

Smøorrebrod is open-face sandwiches, typically served on rye bread (rugbrød) and topped with fish or meat, cheese, and garnishes. Originally a traditional Danish farmer’s lunch, it’s now one of the most recognisable dishes in Denmark and served in almost all restaurants.

Don’t miss Torvehallerne Market, smack in the centre of the city, where you’ll find everything from fresh fish stands and local butcher stalls to seasonal vegetables and fruit, alcoholic beverages and pre-packaged foods to take away with you. The market has two food halls so you are sure to find something you’ll enjoy.

Where to Stay in Copenhagen

No matter where you stay in Copenhagen, you will find it easy to get around. I’ve listed just a few neighbourhoods you should consider.

One of the best neighbourhoods to stay in Copenhagen is Nyhavn Harbour, which is one of the most central and picturesque neighbourhoods. This old commercial port area is chock full of cute shops and restaurants nestled in the colourful wharf buildings. Hotels in this area include 71 Nyhavn, Radisson Blu, and Copenhagen Strand. 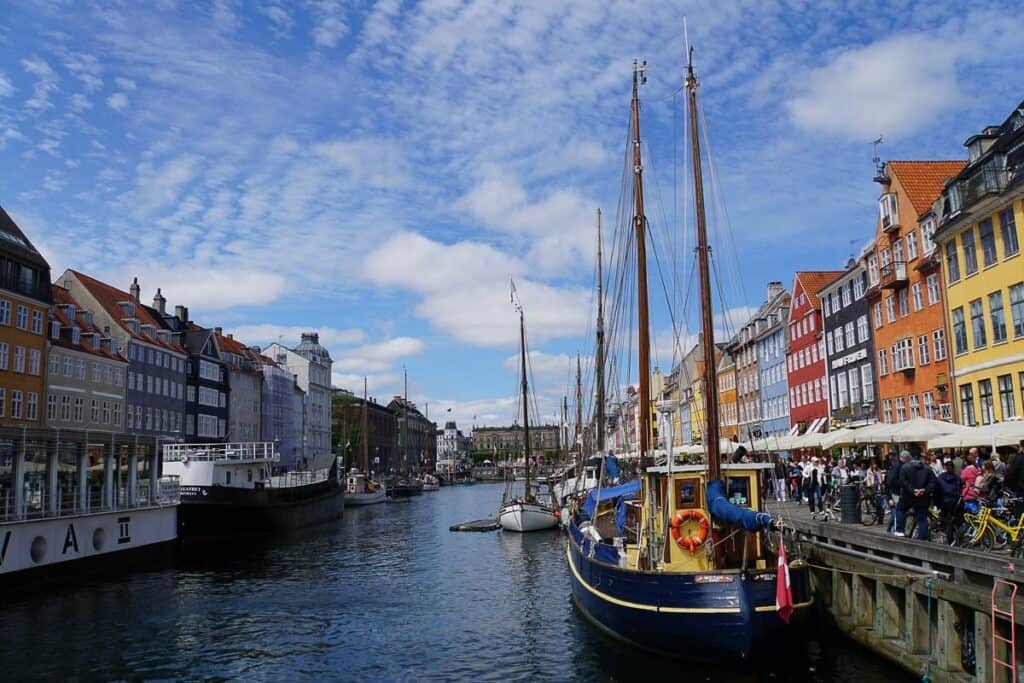 Copenhagen’s hippest district is Vesterbro, where you will find a vibe similar to New York City’s Chelsea neighbourhood. The former red-light district is now home to artists, filmmakers, designers, and chefs, all of whom are invested in seeing this neighbourhood thrive. Hotels in this area include Nobis Hotel, 66 Guldsmeden, and Scandic Kodbyen.

Copenhagen, Denmark, is a beautiful, historic city with a lot of character, charm, glitz, glamour, and fun. This exciting city is one of the best places to both visit and live, and once you’ve spent time here, you’ll agree. 3 days in Copenhagen will introduce you to the city’s castles, canals, and chefs, and have you longing to return to see more. 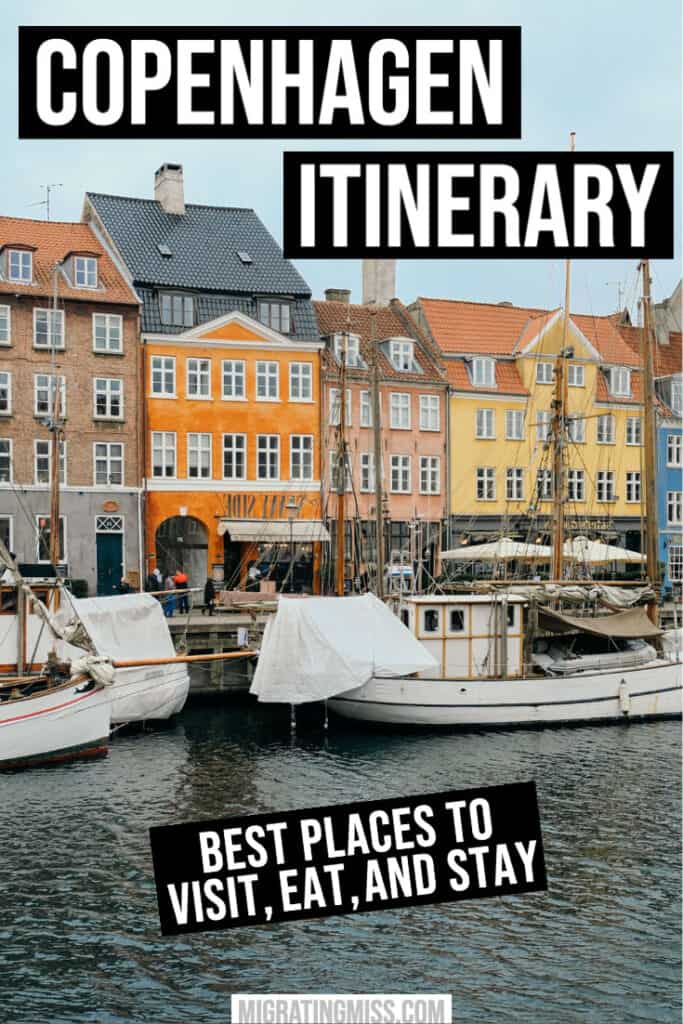