Let’s just say that I had no idea what I was doing when I arrived in Madrid by train, and I got some very strange looks as I got off and on the metro at the same stop because I went in the completely wrong direction. In the end, I gave up and walked to my hostel… a guide on how to get around Madrid would have been very useful!

As the capital city of Spain, Madrid has a lot to offer. There are so many famous landmarks in Madrid and amazing things to see and do there including some not so well known highlights, but unfortunately, not all of them are close together. I ended up using a combination of transport options to get around Madrid, especially because some metro lines were closed when I was visiting. This probably worked out for the best since I discovered much more along the way!

So if you’re new to Spain’s capital city or planning to visit soon, then here are some tips on how to get around Madrid! 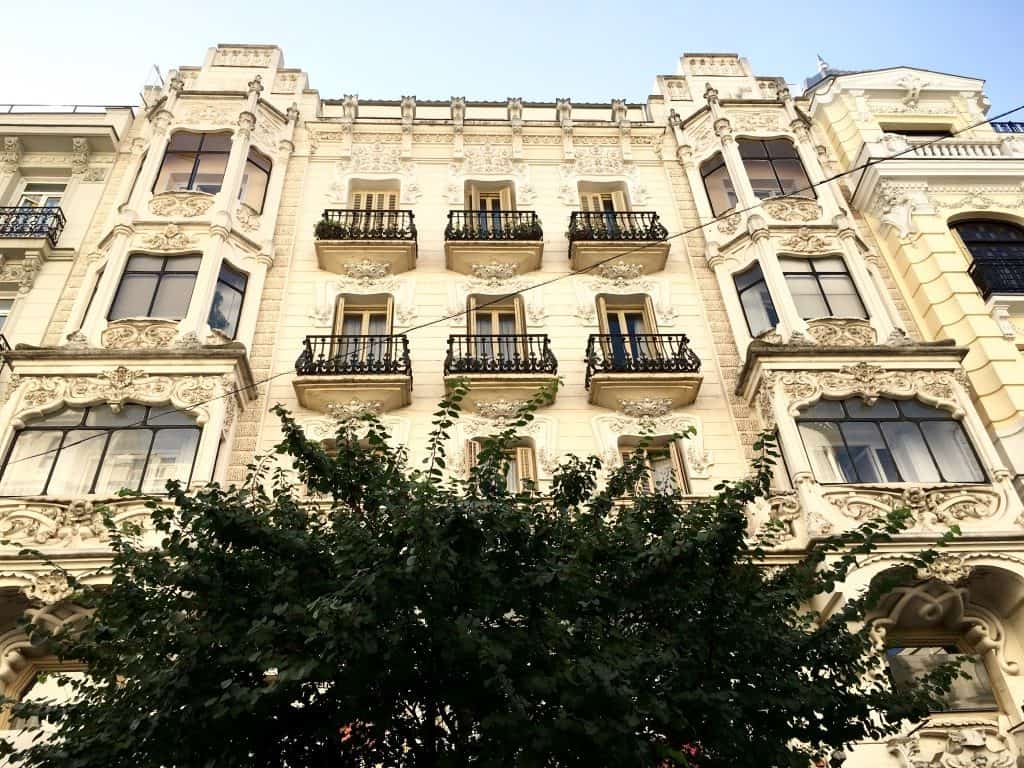 The metro in Madrid might seem overwhelming at first but it’s easy to get around once you understand it. If you’ve been on the tube in London or the Paris Metro you’ll have no trouble! It’s a safe and efficient service and will probably be your first port of call since it’s one of the best ways to get around Madrid.

Look for the name of the station at the end of the line to see which direction you should travel in. The first five stops are €1.50 increasing by 10c every station after that up to a maximum of €2. You can also get a 10 ride Metrobus ticket that works on the buses and metro for €12.20. Don’t forget to hold onto your ticket because you need it to enter and exit! 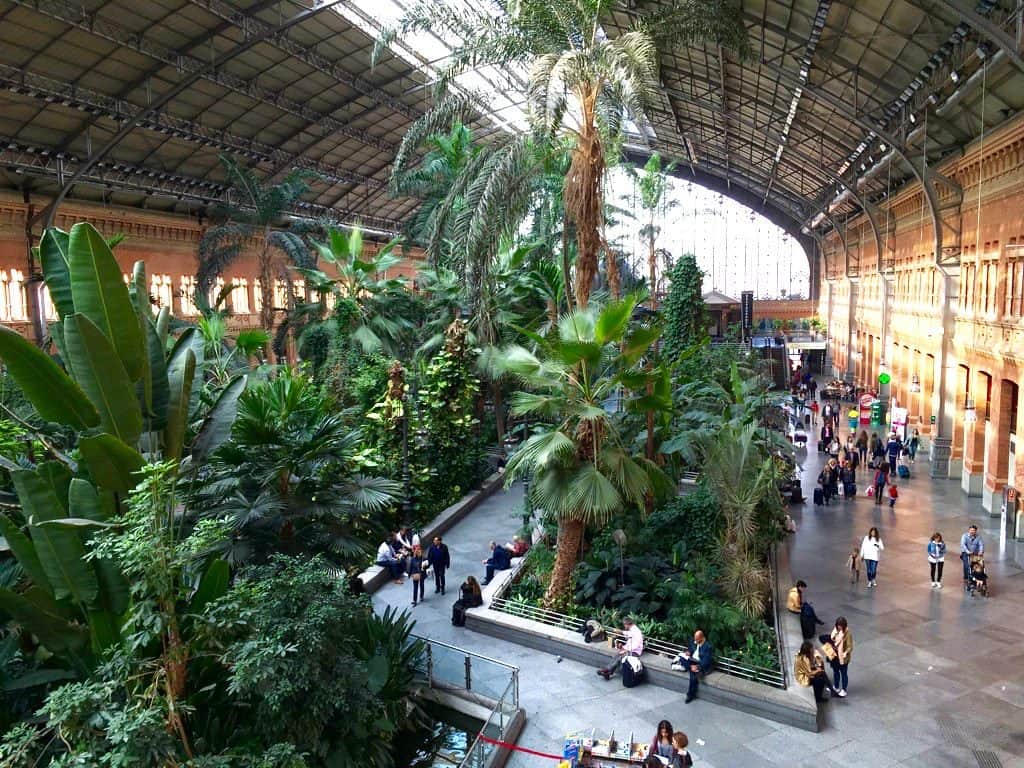 Buses can be useful for moving quickly up and down a street if you don’t feel like walking or having to go down to the metro. Public buses are marked “emt” and a single ride is around €1.50.

There are city tour buses if you like to get an overview of the city with commentary or hop on and off directly at all the top sites to see in Madrid. You can buy a one or two day hop on hop off bus ticket for an adult for €21 or €25. The Madrid city tour bus has two routes, and if you’re not on a strict budget or have limited time they can be a great option to see a lot of the places to go around Madrid. Or not have to worry about learning any more about public transportation in Madrid! 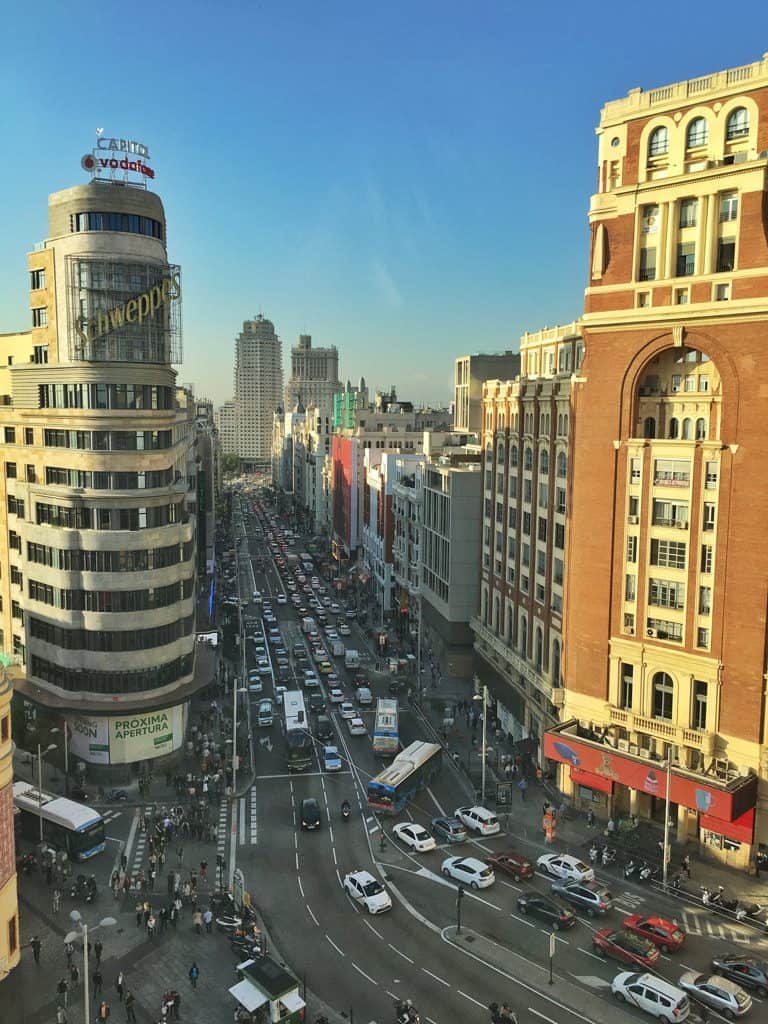 I’m always a fan of walking a city a much as possible, but I know not everyone is as keen to spend 8 hours on their feet as me! In destinations like London and Paris it’s easy to look at the metro map and think you need to train from place to place, but often the distance between attractions isn’t as far as you think. Madrid was no different and I found walking to be a great way to get around. I happily walked from where I was staying in Huertas to most destinations, like El Retiro, Plaza Mayor, Gran Via and as far as Malasaña. In hindsight, I walked a little too much at times, which brings me to my next point… 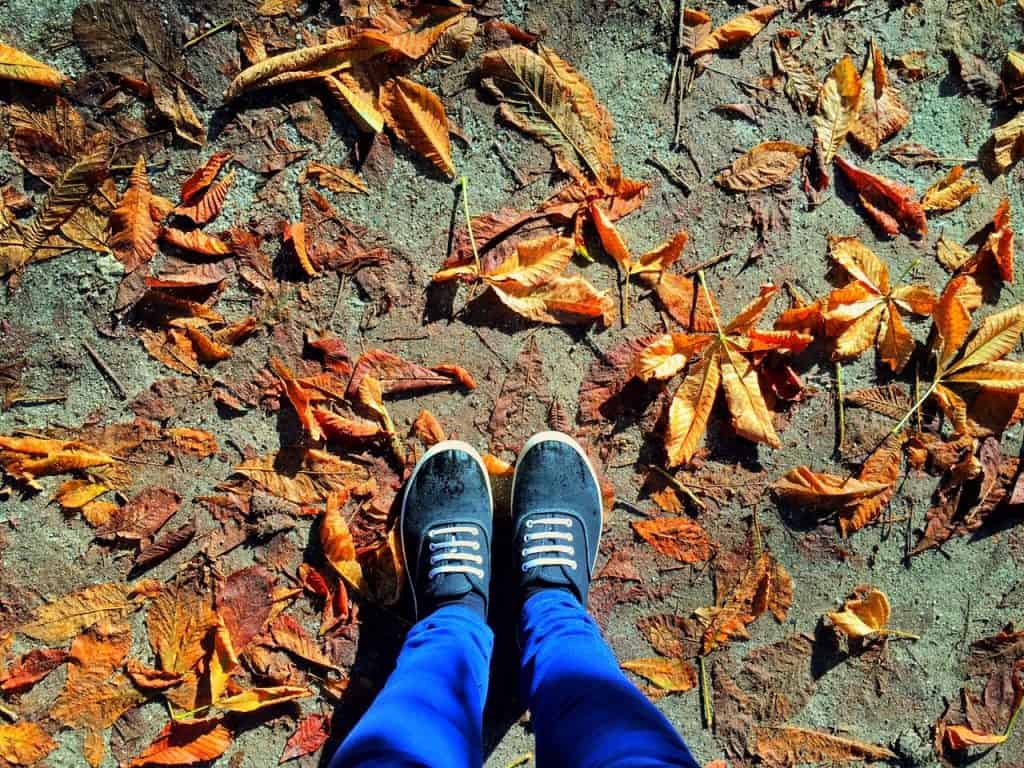 One look at the major avenues of Madrid and you’re unlikely to think Madrid is a cycle-friendly city. But luckily if you know where to go them cycling is a great way to get around. Parquet El Retiro was one of the highlights of my Madrid trip and the perfect place to cycle around and the streets nearby are wide and flat so you can continue to some of the other places to see in Madrid like the Prado Museum.

Malasaña is a trendy neighbourhood in Madrid, filled with great cafes, restaurants, and a creative feel. It’s a great place to cycle around because the narrow streets mean cars are travelling slowly. Plus you can stop at one of the best cafes in Madrid, La Bicicleta, a bicycle-themed cafe (don’t be fooled by the rather plain exterior, the inside is amazing!).

Madrid has been working hard to update its cycle network, including along the river where there are now 30km of bike routes to explore. If you want to see some of Madrid’s top sites by bicycle then a company called Donkey bikes have just started a city bike in Madrid scheme where you can rent bicycles through an app on your phone 24/7. Check out their site for some great tips on where to go and Spanish cycling rules in general! 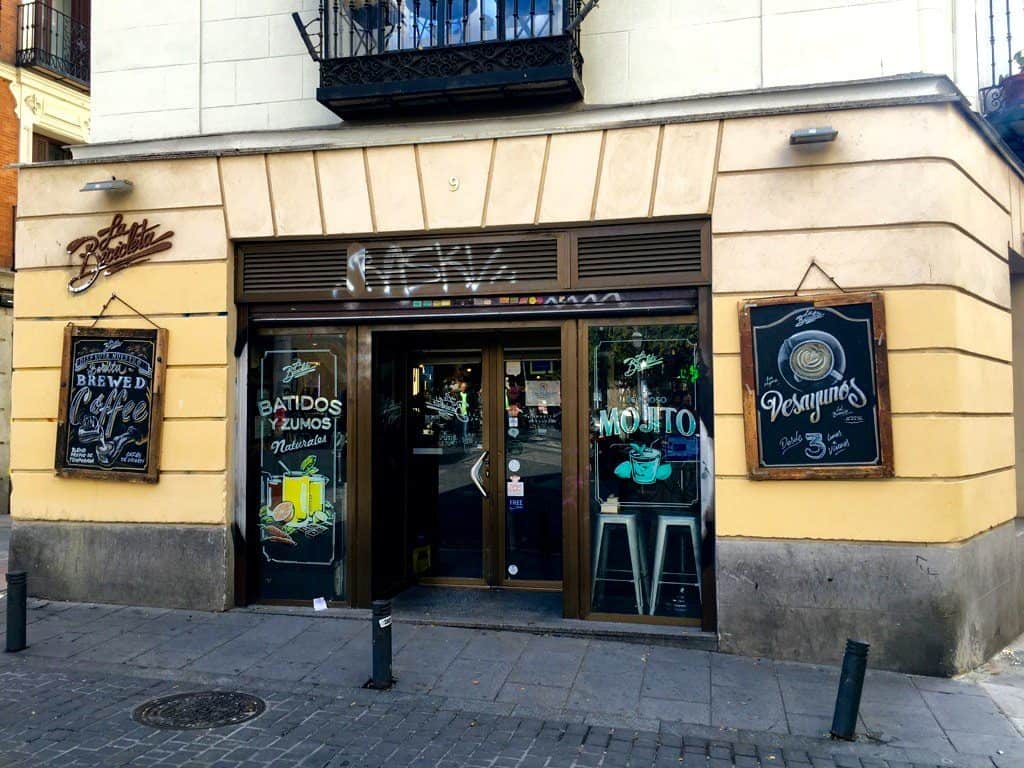 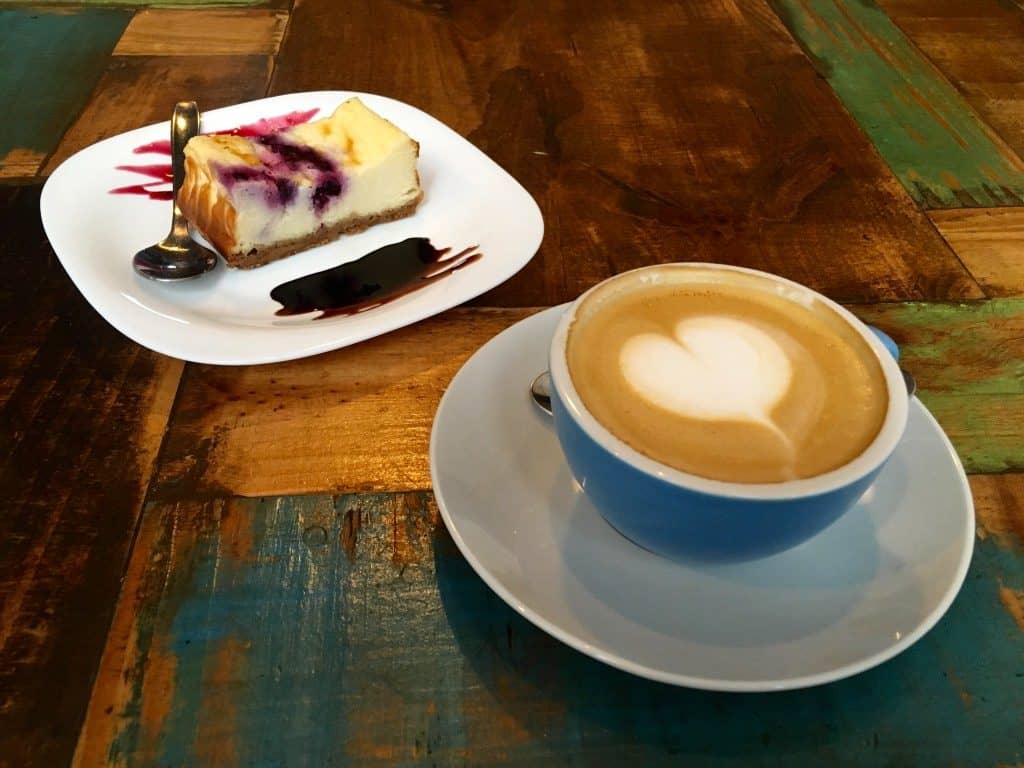 Taxis in Madrid are reasonably priced, but there are plenty of other transport options I’d consider first unless you’re making a late night, complicated, or long journey with luggage. Look for the white cars with a red stripe and a green light showing when they’re available.

The meter usually starts around €2 euros (more on weekends) when you flag down a cab, and goes up around €1 per kilometre. There are some surcharges for rides to the airport, train station, football stadiums or the bullring, so make sure you check with the driver and also ensure they turn the meter on. 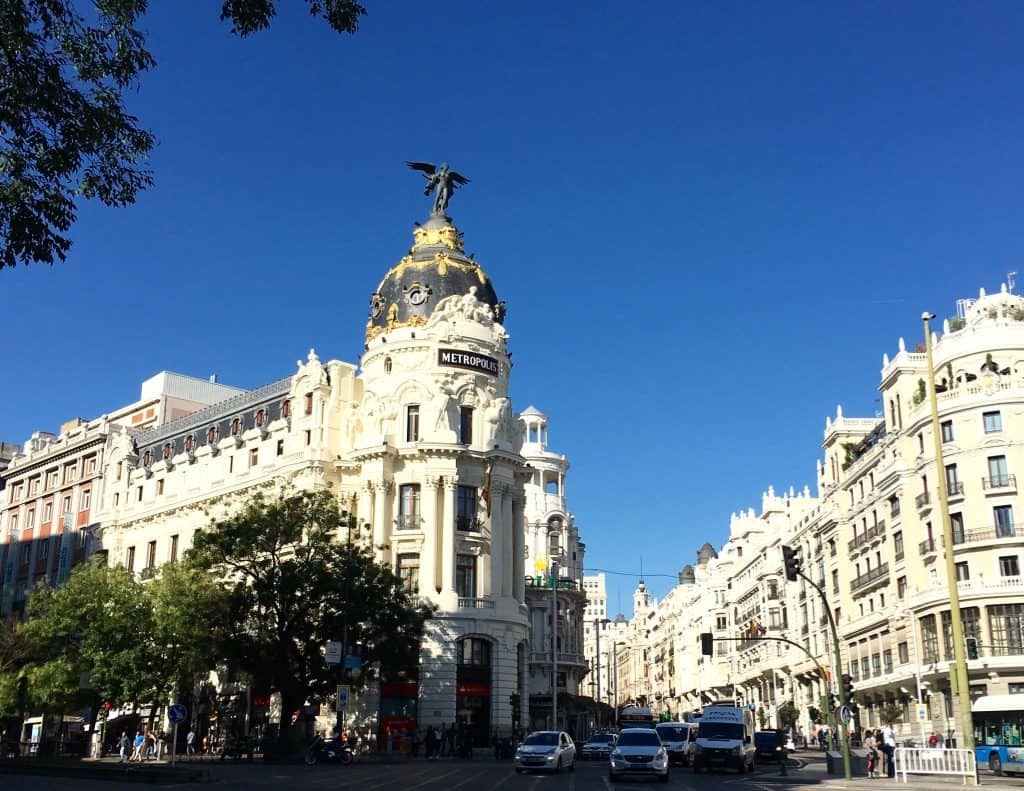 Madrid is an amazing city with plenty of places to see to keep you entertained. But if you’re looking to venture out of Madrid than I’d highly recommend the taking the train or an organised tour. There are some great day trips from Madrid to smaller towns nearby so try to factor in a day or two to see some more of Spain!

Read More: How to Find Apartments for Rent in Madrid 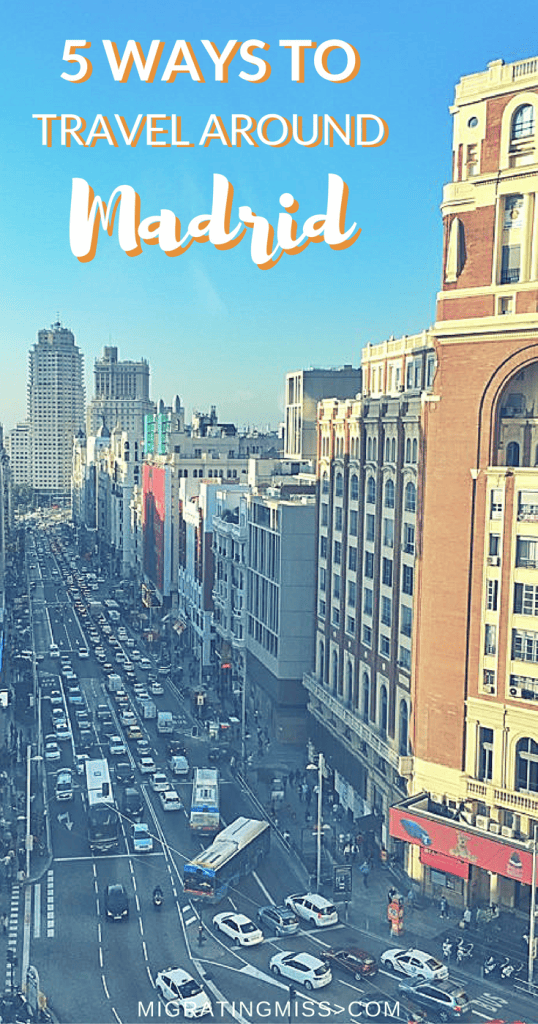 8 thoughts on “5 Ways to Get Around Madrid, Spain”