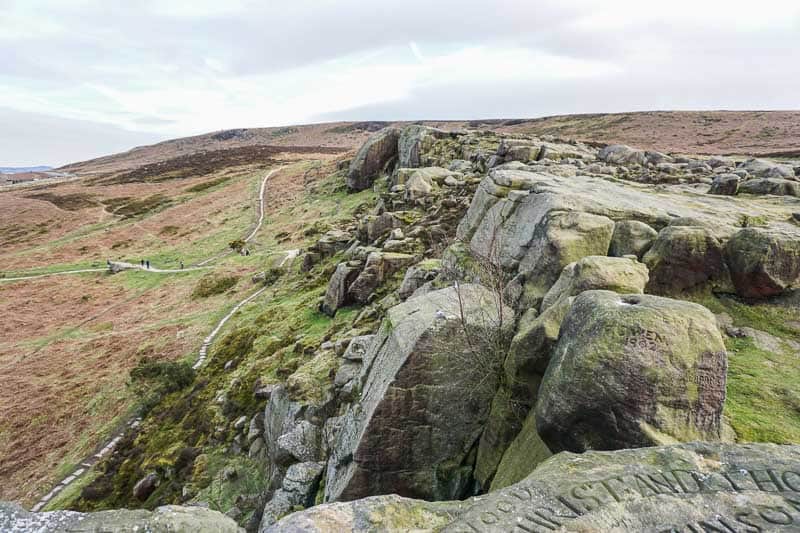 Ilkley. Never heard of it? I’m not surprised, but it’s time you should. It’s a beautiful spot on the edge of the Yorkshire Dales, a quientessential English village. There are so many lovely things to do in Ilkley, and it’s the perfect base to explore things to do around Yorkshire.

Come to England and you’re likely to visit London, and maybe seek out one or two places like the Cotswolds or Stonehenge to get more of an English countryside feel. If you love Jane Austen you might pop over to Bath, or you could go as far north as Liverpool for a Beatles tour. And while you’re up there, maybe visit the Lake District.

Have you ever thought about Yorkshire though? Not just York itself, which is a step back in time with it’s Tudor houses and medieval walls, but the English countryside, the rambling green hills forming stunning landscapes, dotted with stone-built villages. You can travel to Yorkshire as a family, or a couple, friends, young or old, it doesn’t matter. It’s a great place for all sorts of travellers!

Yorkshire doesn’t get anywhere near the international acclaim of the Lake District, but I’d argue it should. 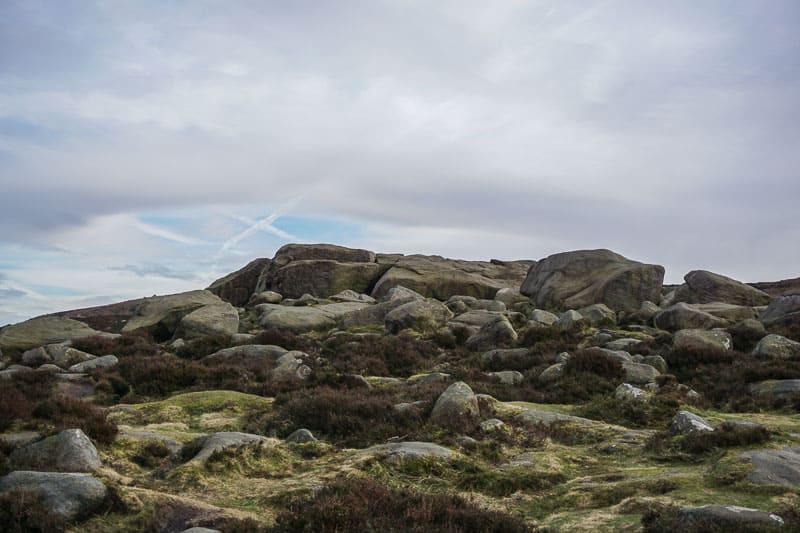 A trip to Ilkley

I recently visited Ilkley, which is located in West Yorkshire. Like Bath, Ilkley gained notoriety as a Spa town. If you have no idea what that means, like me before I moved to the UK, then basically it’s somewhere that became famous because of the water nearby and the belief it was beneficial for health. A spa town is a resort town based on a mineral spring where people would go to “take the waters”, which meant drink them no matter how gross they might be, and spend a lot of time socialising. Think Jane Austen and Persuasion (my favourite!).

Spa towns are all over the UK, and you can tell by their names. If it has “spa” in their name (Royal Leamington Spa) or “wells” (Royal Tunbridge Wells) or “bath” (Matlock Bath). They’re usually pretty little places, and Ilkley is no different.

But the history of Ilkley goes back much further, and you can find carvings and manmade holes in rocks that date back to Neolithic times (that means, old). In keeping with the Roman history of Yorkshire, there’s also the remains of an old Roman fort near the town centre of Ilkley.

You might not think to visit some of England’s smaller places, but there’s much more to see in the countryside than you might think, and Ilkley is the perfect place to stay to visit places nearby too! 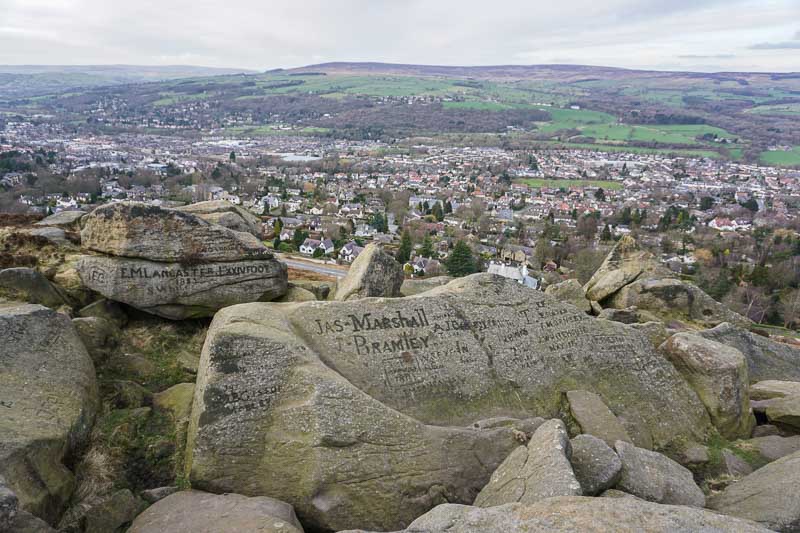 I always read about “moors” in historical books set in Britain, but I didn’t really understand what that meant. Basically, land in England was all divided up between landlords, but there are huge “wastelands” of uncultivated land that are often covered with peat, or heather, and these are called moors. One of the best things to do in Ilkley is visit Ilkley Moor. Maybe some photos will show it better than I can explain… 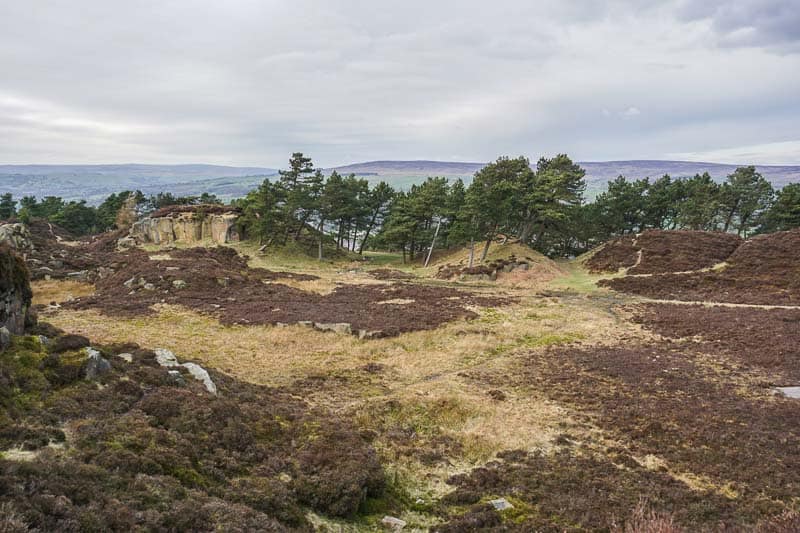 The Cow and Calf

One of the most famous parts of Ilkley Moor is the “Cow and Calf”, which is a a huge rock with another small one beside it, that apparently looks like… a cow and it’s calf! I can’t say I could particularly see it, but I was impressed nonetheless.

When we got close up to the cow, as such, I was surprised to see much of it is covered in carved graffiti, some stretching back to the 1800s! It was surreal to think about these people making the effort to carve their names in stone, and what their stories might be. If I lived there I think I’d have to investigate! 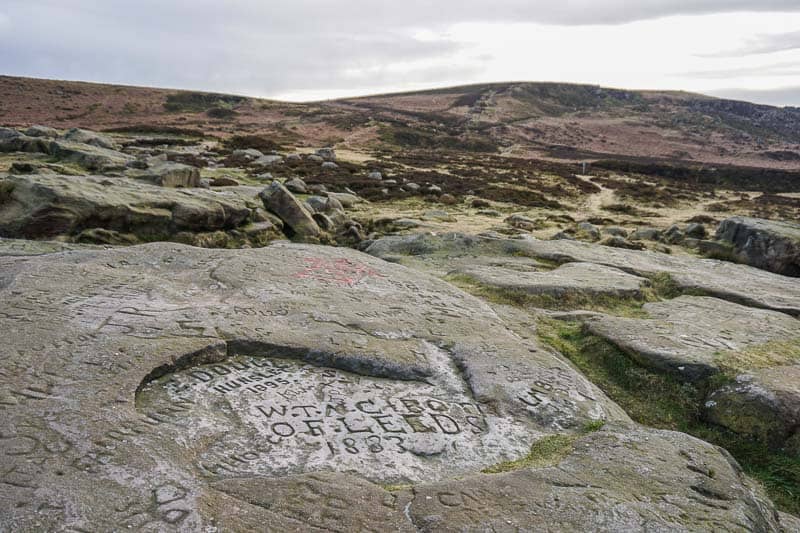 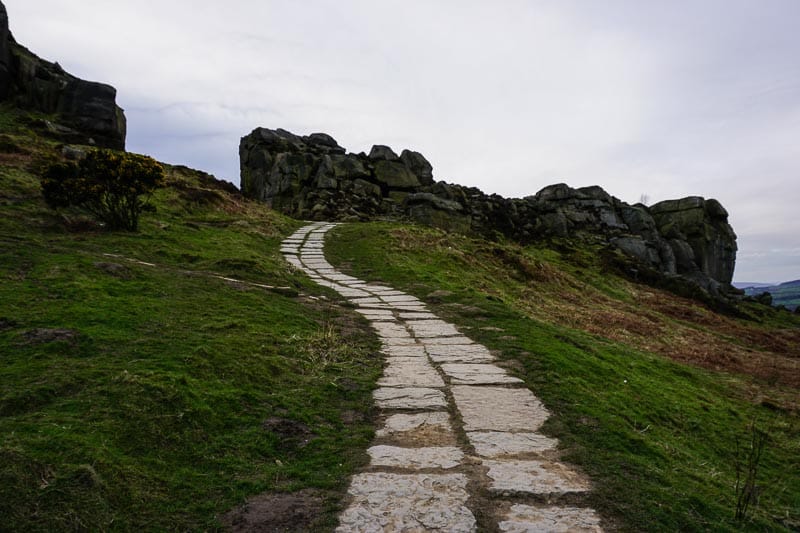 Gateway to the Yorkshire Dales

Ilkley is one of the gateway towns to the Yorkshire Dales. It’s a great place to stay and explore the other towns, castles, abbeys, and beautiful moors nearby. Don’t ask me what a dale is, but the Yorkshire Dales is National Park is a beautiful area in the north of England. It’s popular with walkers, and it’s no surprise with scenes like this:

Don’t ask me what a dale is, but the Yorkshire Dales is National Park is a beautiful area in the north of England. It’s popular with walkers, and it’s no surprise with scenes like this: 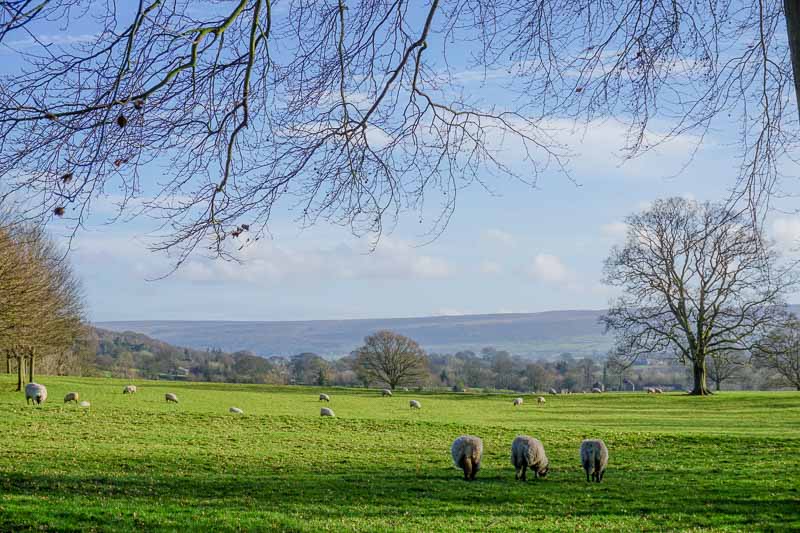 Nearby town of Haworth

Haworth is just another half an hour away from Ilkley by car, and it’s another town that thrives on tourism. The Brontë sisters wrote most of their novels while they lived at Haworth Parsonage, which is now a museum. The railway station is also part of the Keighley and Worth Valley Railway, which is now a heritage steam railway.

You’d be forgiven for thinking Bolton Abbey was near Bolton, but instead it’s one of the best things to see near Ilkley. It’s an estate full of walking tracks, waterfalls and rivers. The actual Bolton Abbey was technically a priory first, and the remains of it are still there to explore. One half is in ruins and the other half is a church still used today, which is quite unique. 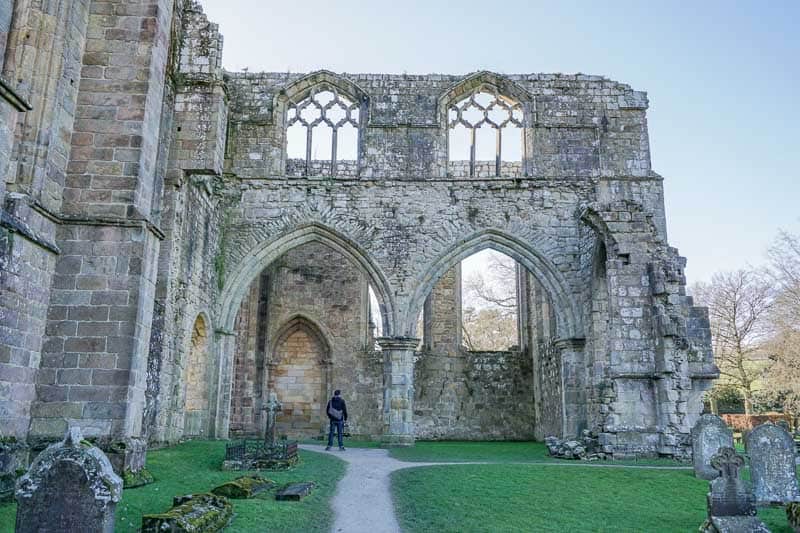 Millions of years ago what is now the Yorkshire Dales was at the bottom of the ocean. The ocean floor turned to limestone, which has been eroded over time by water, forming huge caves. Stump Cross Caverns were discovered by miners in 1860, and decided to open them as a tourist attraction. Now you can wander through a small part of the cave system and see the formations, some of which still bear the names the miners gave them! 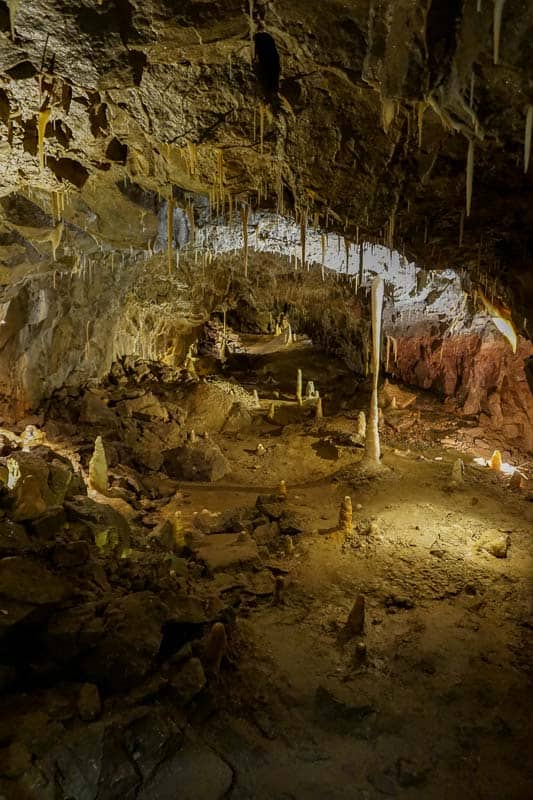 How to get to Ilkley

Ilkley is a great place to visit with a car, so that you can drive around to all the main attractions nearby. However, it can also work really well for a carless getaway. You can get to Ilkley by train from both Bradford and Leeds in only half an hour! You can walk from Ilkley up to the Cow and Calf on the moor and bus to some nearby sights.

Where to stay in Ilkley

There are some really reasonably priced hotels Ilkley on Booking.com that are top notch. It’s also the perfect place to try the traditional British B&B stay, which you can book through there as well.

When you come to England don’t just stick to the major cities! Make sure you have the quintessential English countryside experience too, and definitely consider Ilkley to make that happen! 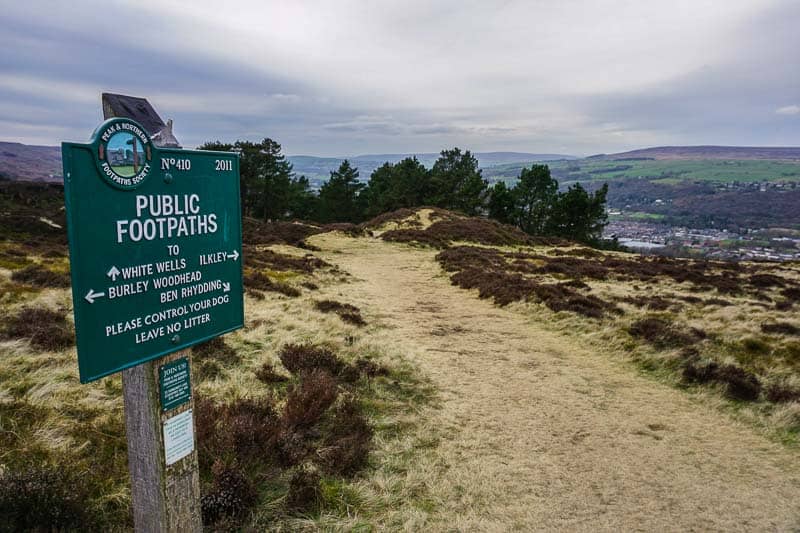 Have you spent any time in the English countryside?

This post contains affiliate links at no cost to you! 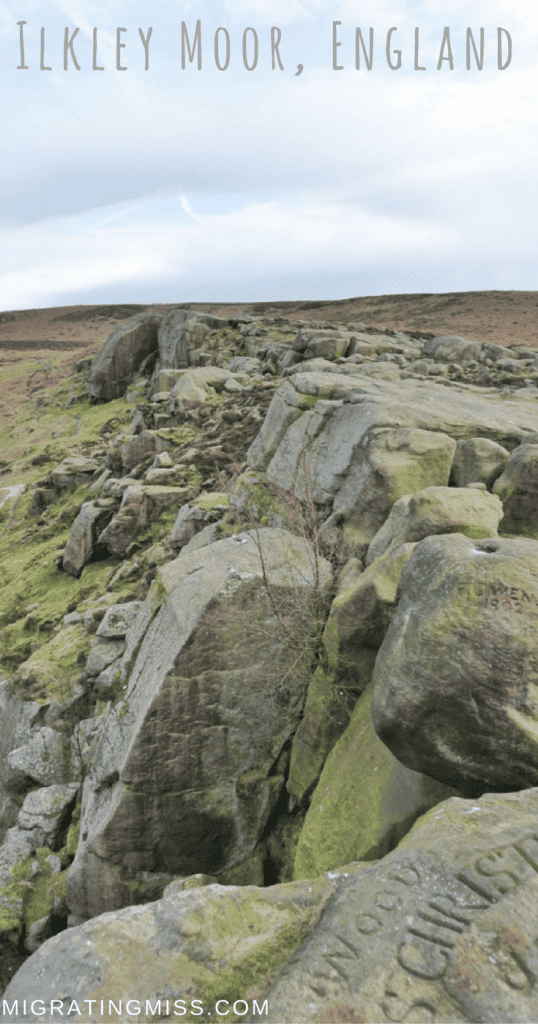 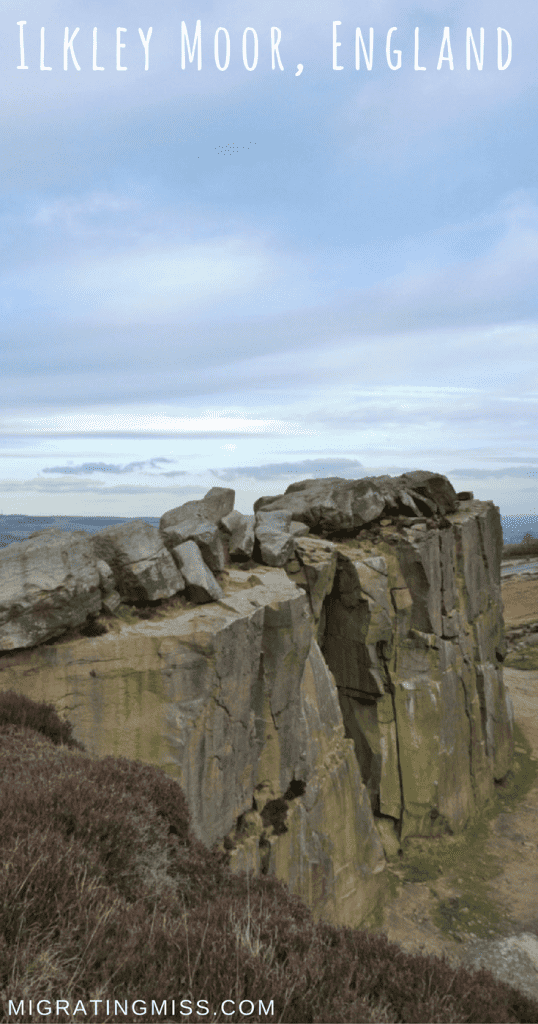 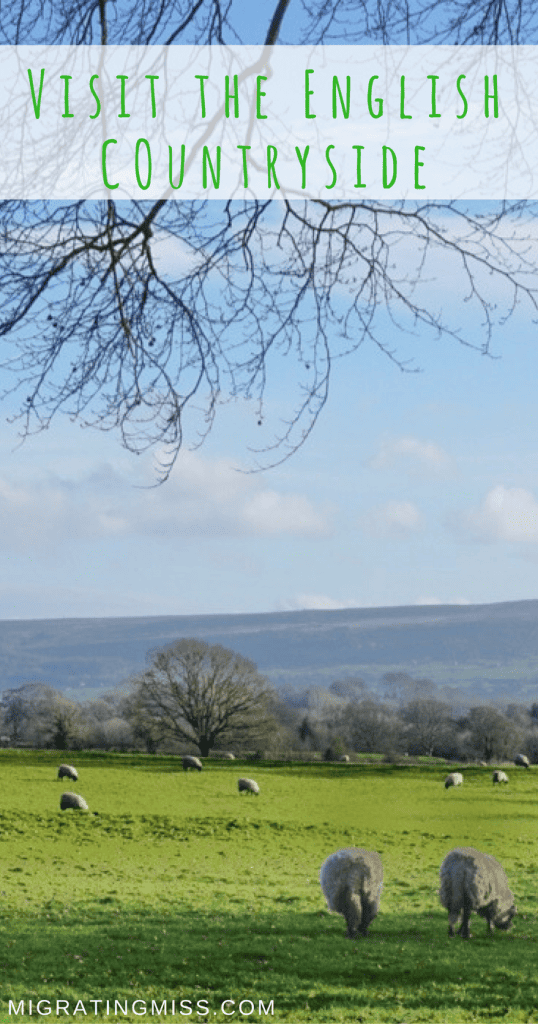 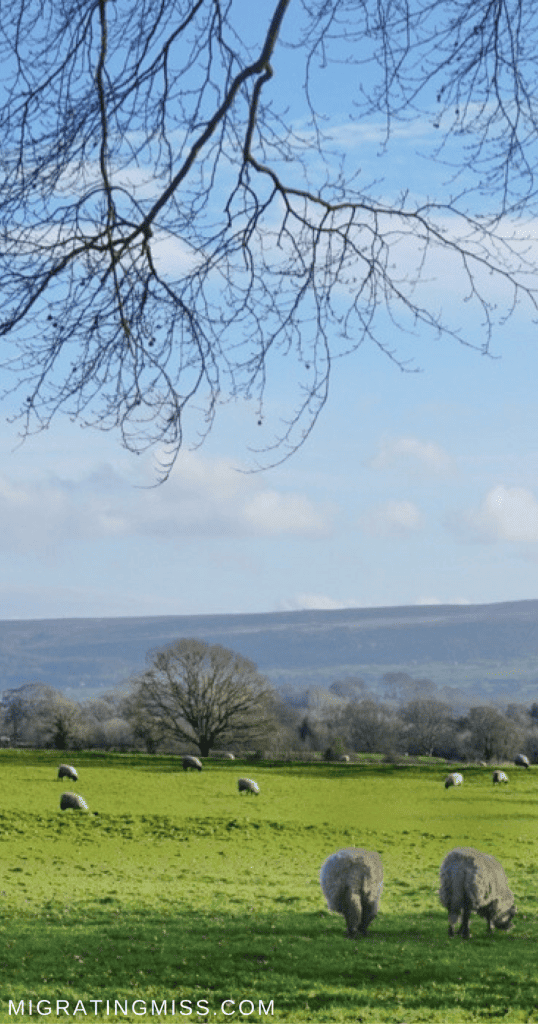 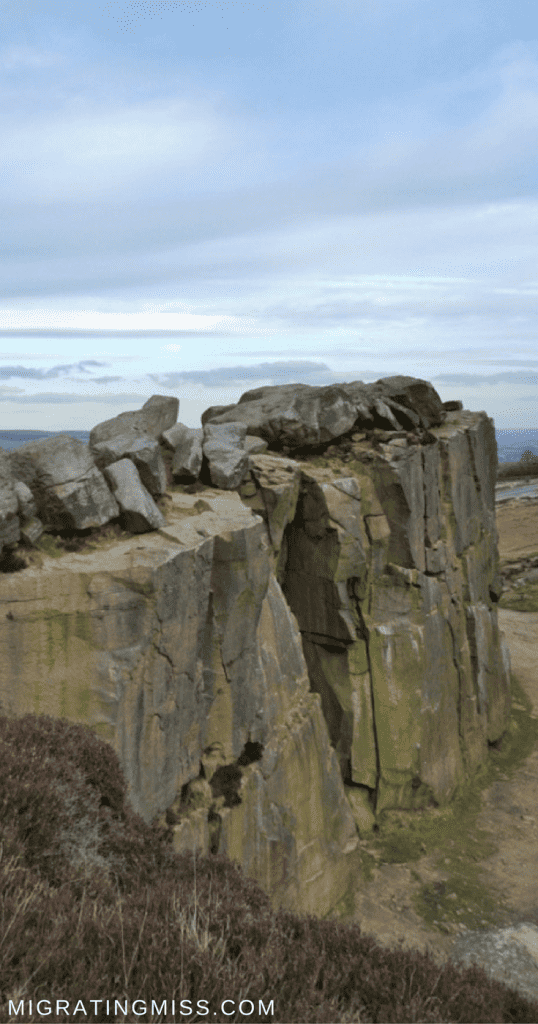 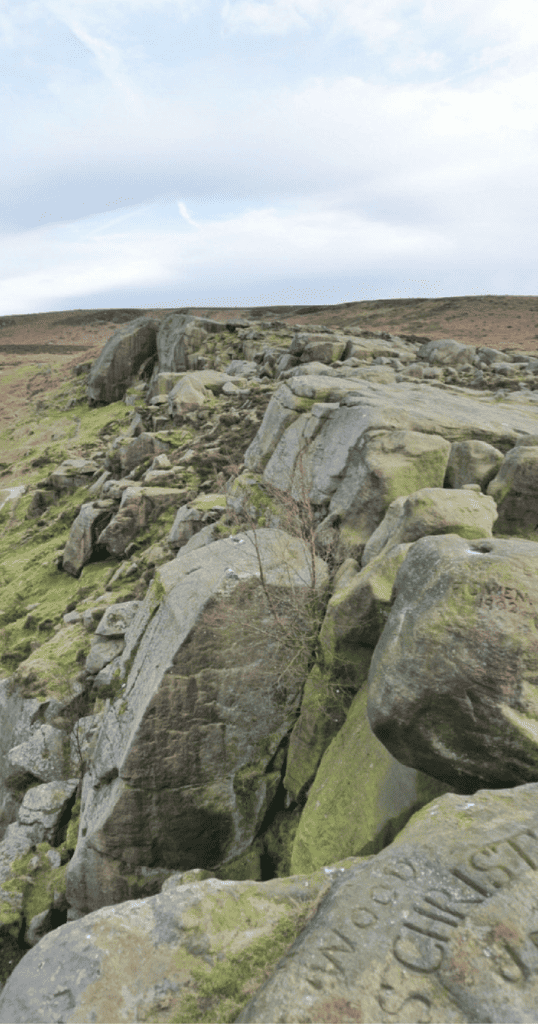 4 thoughts on “Things to Do in Ilkley, Yorkshire”