Why would you want to visit Edinburgh in winter? Scotland has a reputation or rainy, cold, and gloomy weather, and Edinburgh is no different! And I won’t deny that sometimes the weather can be exactly like that. But there can also be crisp, sunny, winter days, or something not-so-bad in between. Regardless, there’s plenty of things to do in Edinburgh in winter and some real positives to visiting at this time of year too!

I moved to Edinburgh in the month of December, so all my first impressions of the city were in winter, and it definitely didn’t disappoint. 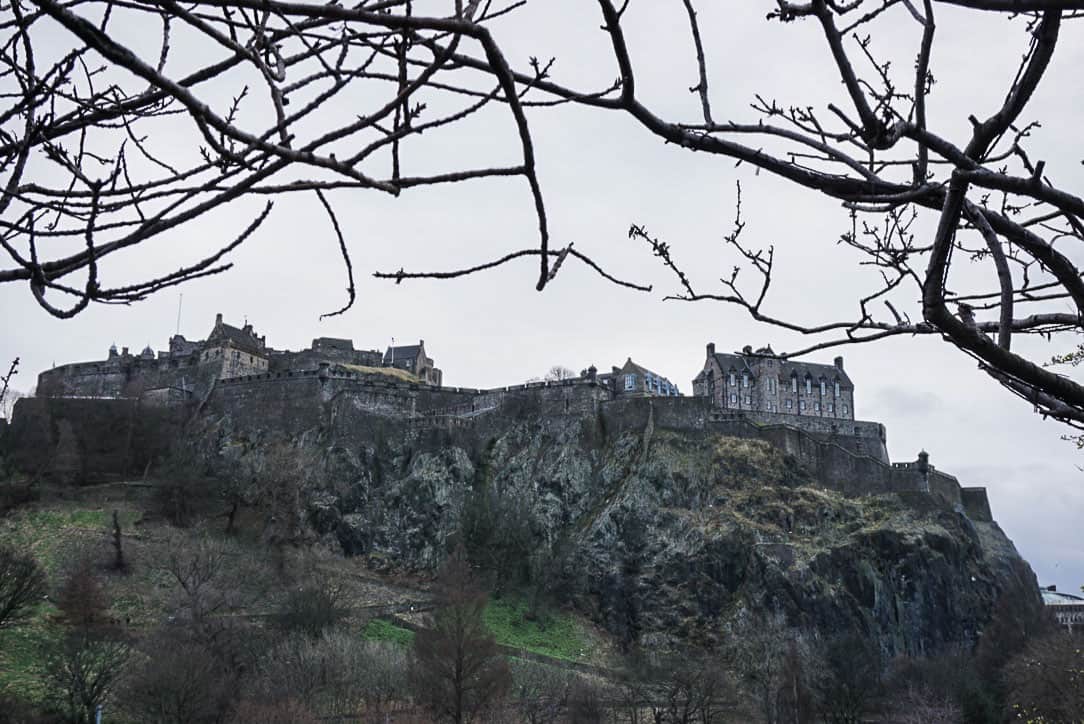 Why visit Edinburgh in winter?

As Scotland’s capital city, Edinburgh is definitely not short on visitors. They come to see the Castle, the historic Old Town the locations that inspired Harry Potter, and use it as an entry point and able for exploring the rest of Scotland. So why visit Edinburgh in winter rather than summer?

For starters, the summer is the busiest time in the city, especially in August. Five of Edinburgh’s eleven festivals run during August, and it’s well known as the most popular time to visit the city. While the Edinburgh festivals are definitely worth experiencing at least once, they also totally transform the city. The population at least doubles during the time and accommodation expenses are through the roof. There are pop-up bars and eateries everywhere, and while all of these and the events going on make for an exciting trip, they give you a totally different perspective of what Edinburgh is like.

Coming to Edinburgh at a different time of year doesn’t mean you have to miss out on all the excitement! There are other festivals on, and always lots of events, as well as things that you can’t do at other times of the year.

Edinburgh in spring is one of my favourite places to be. The beautiful blossom trees are in full bloom, daylight is stretching its wings again, and the weather is generally more settled, and it’s before the full-on summer crowds descend on the city.

Likewise, autumn is a lovely time to visit as the colours of the city change and things quieten down after the summer, although the weather can be a little more unpredictable at this time of year.

So if all the other seasons make great times to visit Edinburgh, why bother to come in the winter? Because you get to see a whole new side of the city once again and do lots of things you cannot do any other time of year, Including having fun at another of Edinburgh’s biggest celebrations… but I’ll share more specifics below! 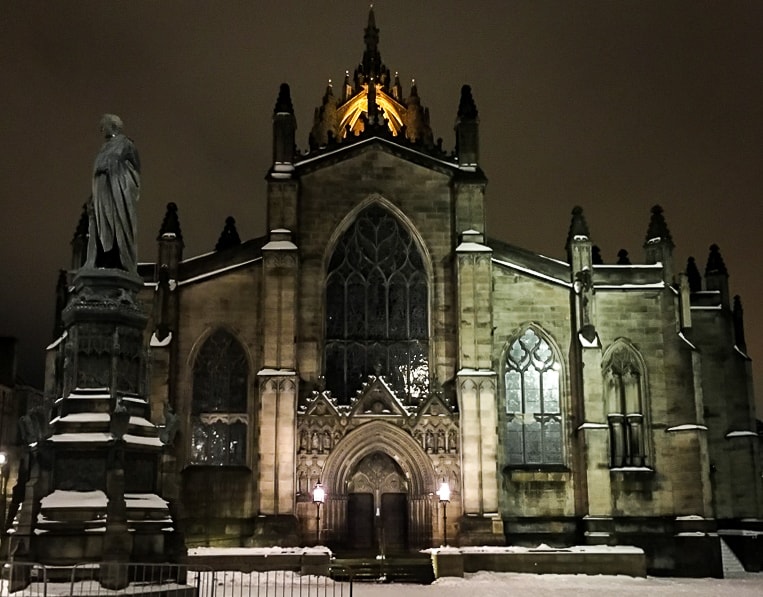 What to expect in Edinburgh in the winter months

“How cold is Edinburgh in December?”

“Does it snow in Edinburgh in December?”

“Is it a good idea to visit Edinburgh in December?”

These are all questions I get asked by people wanting to plan their travels to Scotland in winter, and specifically to Edinburgh in December. Of course, there are no clear cut answers.

Firstly, the average temperature in Edinburgh in December is a high of 7C (45F) and a low of 1C (34F). This is actually pretty bearable compared to many European destinations in winter, and it rarely falls below -4C(24F). While you’ll need a good coat, warm boots, and accessories like a hat and scarf, you don’t need any particularly special clothes. (Check out more in my guide to what to wear in Scotland). 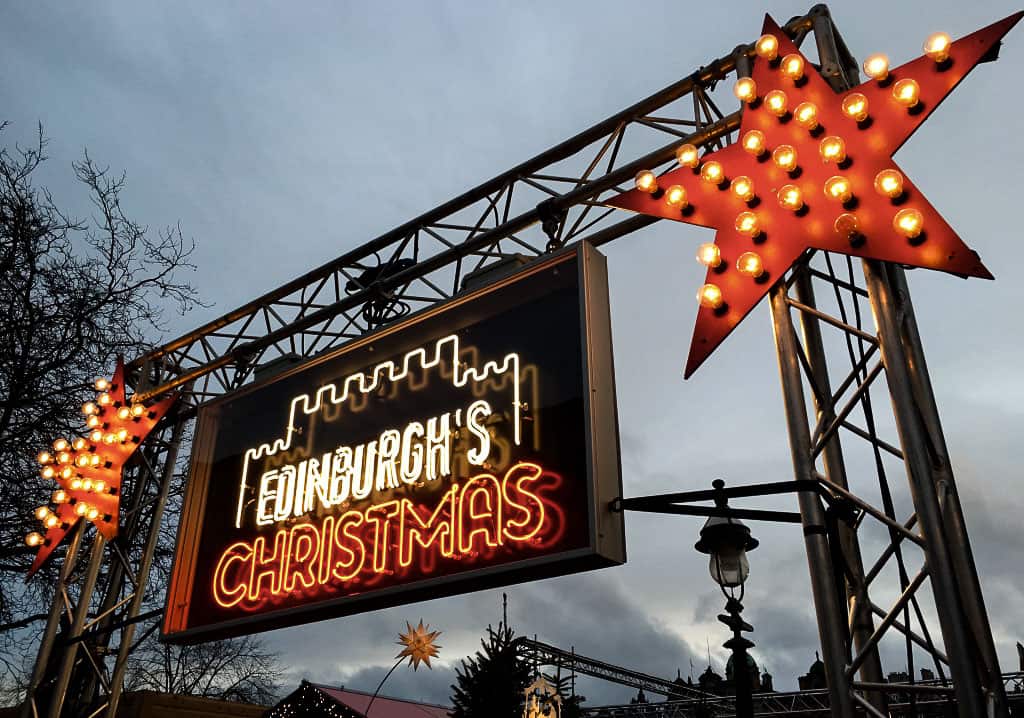 Given those temperatures, it’s actually not that common for it to snow in December, and more likely in January and February when it can be slightly colder. While a white Christmas isn’t impossible, don’t get your hopes up!

Speaking of Christmas though, this is why visiting Edinburgh in December is a good idea. Edinburgh’s Christmas markets are in full swing, complete with lots of fun rides, food and drink stalls, and plenty of gift items to buy. While the days may be short there are pretty lights and mulled wine stands (or whisky!) to make you want to stay out and about!

December in Edinburgh also means Hogmanay, which is the Scots word for New Year’s Eve and encompasses the celebrations that take place at that time. In Edinburgh there’s a torchlight procession you can take part in that winds it’s way through the city, the huge street party on New Year’s Eve itself, culminating in an epic fireworks display from Edinburgh Castle itself. 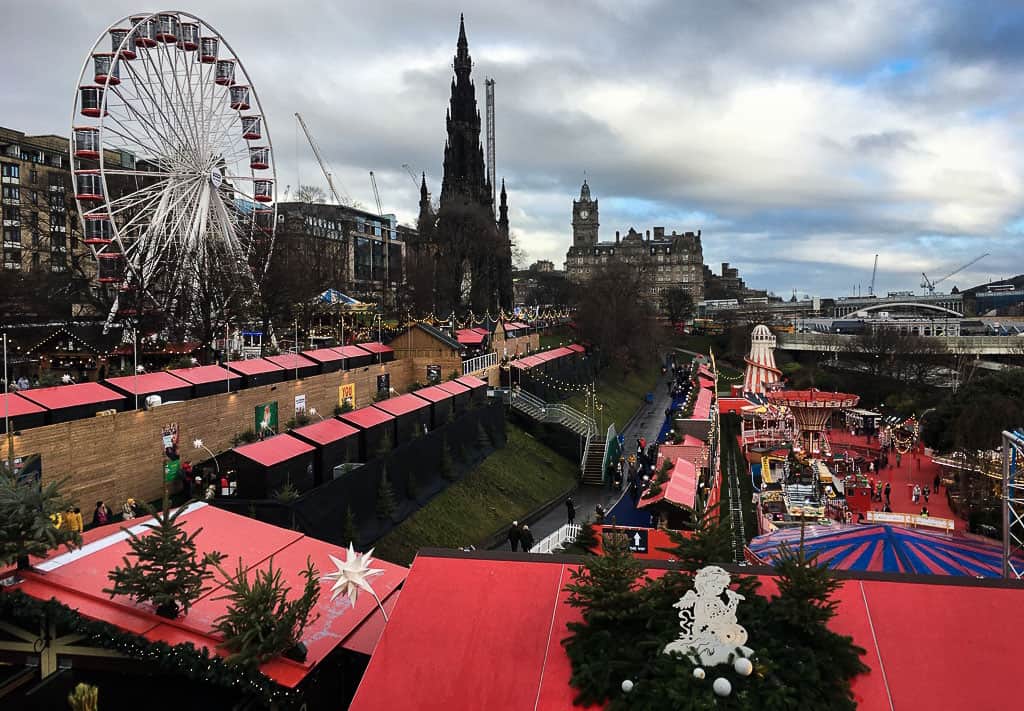 You can continue the Hogmanay celebrations with the Loony Dook on New Year’s Day, where brave souls take a dip in the freezing Firth of Forth, often in fancy dress. However, if this isn’t exactly your cup of tea, there are still several reasons to visit Edinburgh in January.

The city will be quiet, as many people tend to stay in after the business of Christmas and New Year. Accommodation prices drop but all the major attractions are still open, as well as the shops which often have sales at this time of year.

If you’re visiting Edinburgh at the end of the month then keep an eye out for a Burn’s Supper to attend on Burn’s Night. These are in celebration of the life and petty of Robert Burns, whose birthday was the 25th of January. A Burns Supper involves a traditional meal of Haggis, Neeps, and Tatties, alongside ceremonial elements like the piping in of the Haggis and reading the “Address to a Haggis” poem by Burns himself. Some places across Edinburgh will have a public Burns Supper where you can buy tickets, and it usually involves a Ceilidh too (dancing to Gaelic music). 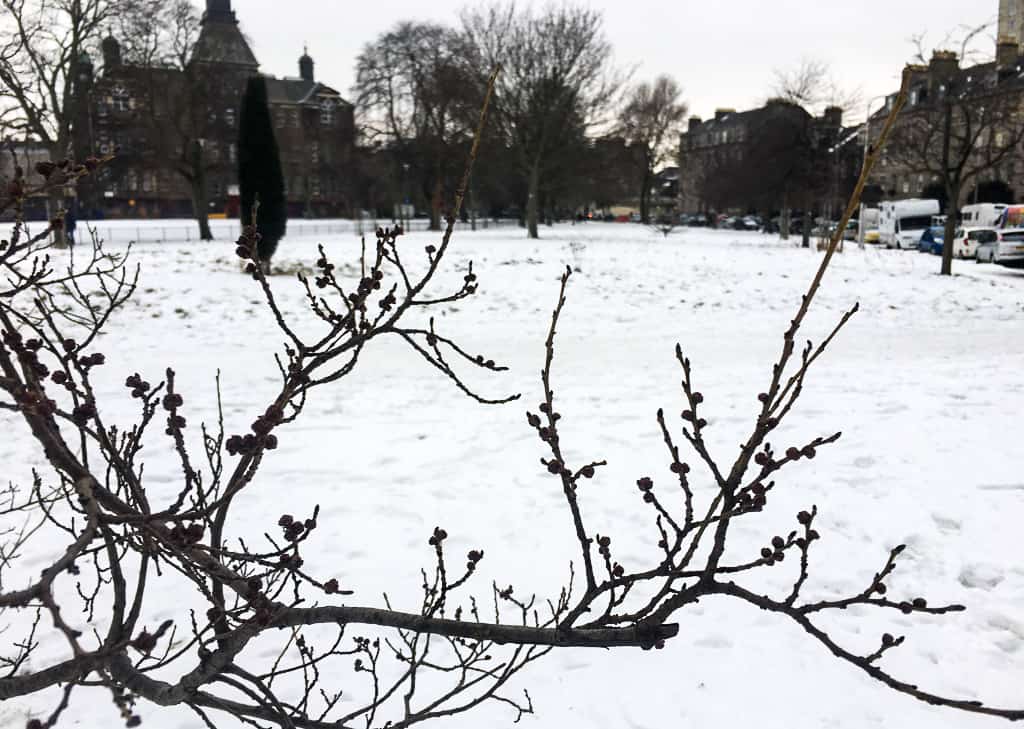 Don’t hesitate to plan a visit to Edinburgh in February either! While the social calendar can be a little quieter in February (apart from Burn’s Night) things seem to bounce back in February. The days are lengthening and the weather has usually warmed ever so slightly. While the next big Edinburgh Festival isn’t until spring (the Edinburgh Science Festival) there are often smaller events happening around town including theatre shows and comedy nights.

It’s also Valentine’s Day in February, and while Scotland doesn’t necessarily buy into the commercialism of the day, it can be a good excuse to book a nice dinner or accommodation or check out one of the many romantic things to do in Edinburgh. 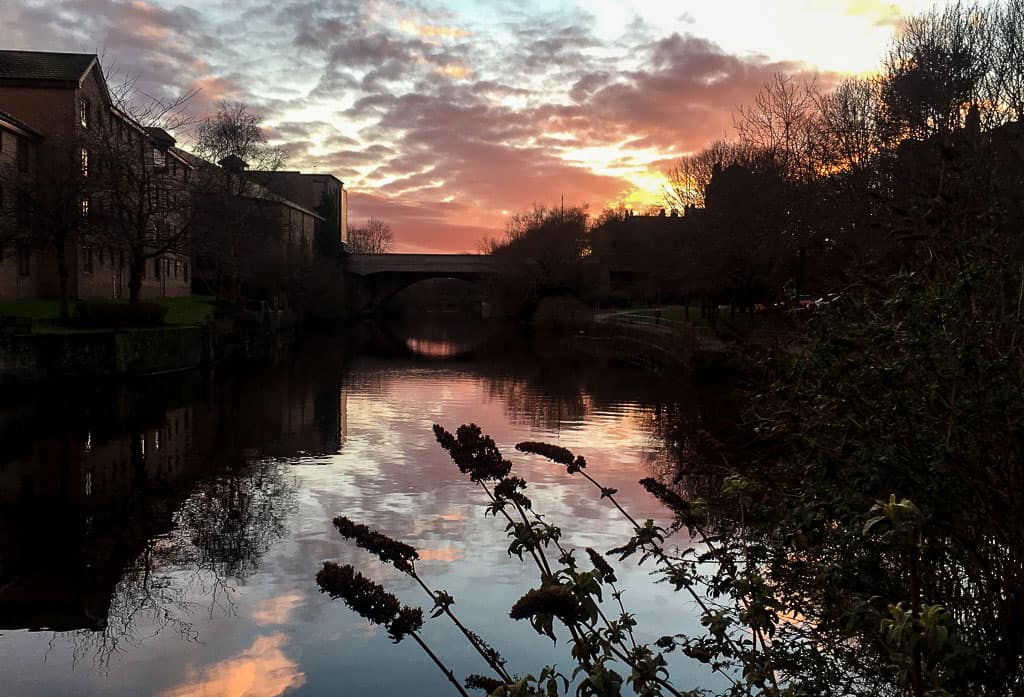 Things to Do in Edinburgh in Winter

While I’ve touched on many of the winter in Edinburgh activities and things to do in the monthly breakdown above, here’s a list of everything you can expect.

Edinburgh’s Christmas Markets actually open around mid-November and close after the first few days in January. East Princes Street Gardens are taken over by a plethora of stalls selling crafts, art, and edible delights. They’re open from 10am to 10pm, and I love popping in whenever I’m in town to warm up with a mulled wine or hot toddy and grabbing a chimney cake! 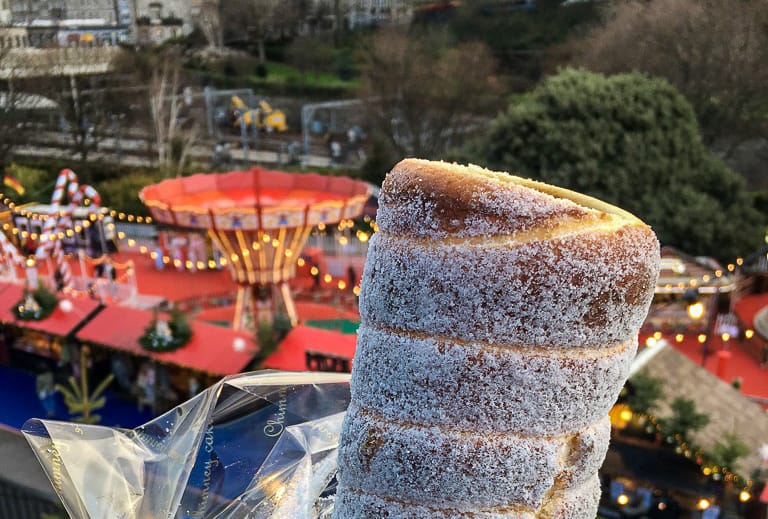 For the past couple of years, George Street has been transformed into a fabulous light show. There’s usually a “switching on of the lights” event, and then you can enjoy them in the lead up to Christmas. There’s also a Christmas tree on the Mound that’s gifted by Norway. 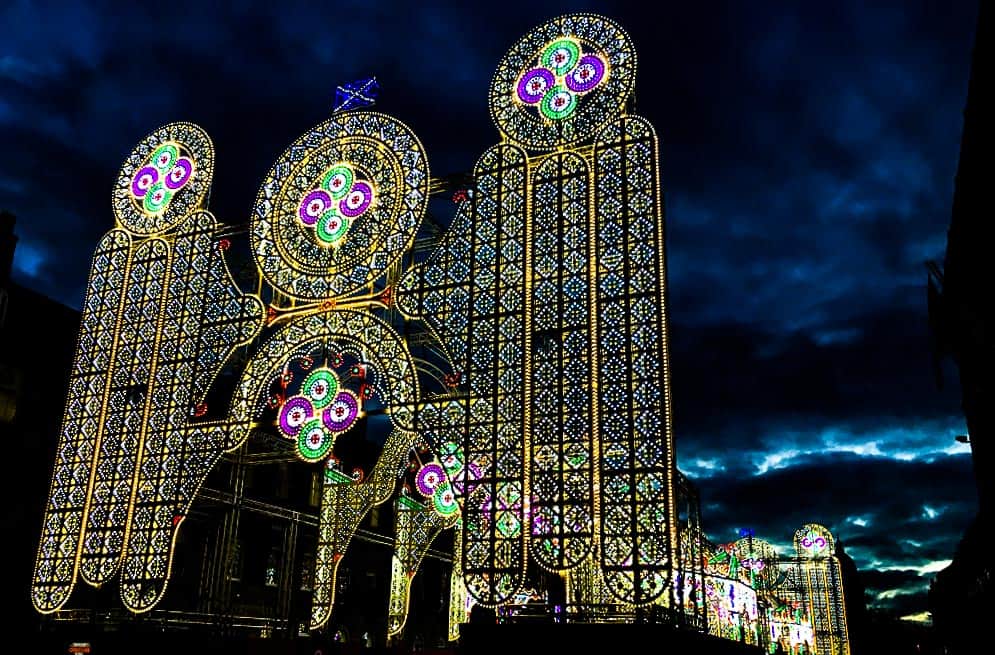 If the weather co-operates then going up Arthur’s Seat in the winter can be a great experience. I used to live nearby and if it was a clear day or early enough for the wind not to have got up then I would go for a walk up there. Sometimes I had it all to myself! Which would never happen in the busier times of the year. Wrap up warm, put on some sturdy footwear, and then venture up, just be prepared for some possible snow at the top if it’s there’s been a cold snap! 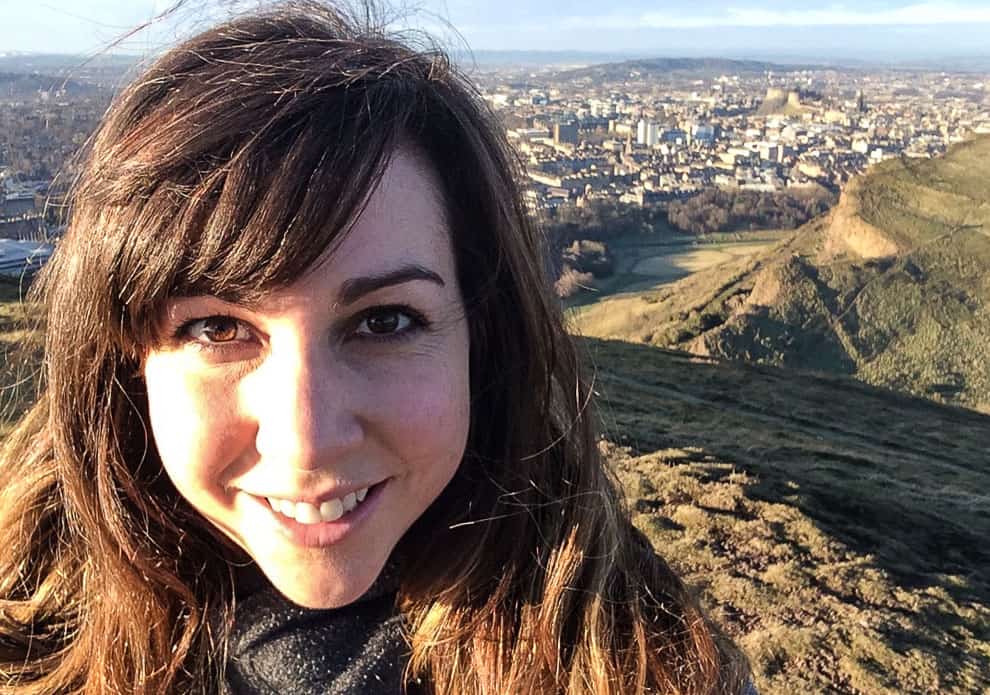 As I mentioned, winter in Edinburgh is a great time for shopping! Firstly you have the market stalls before Christmas selling unique items, and then many shops run sales throughout January so you can snap up some bargains there too.

Wander around the museums

Edinburgh has no shortage of museums, and they make for a great winter activity and you can stay warm and dry inside! While there’s the usual National Museum of Scotland and the Scottish National Gallery, check out other’s like the Museum of Childhood, the Writer’s Museum, and the Surgeon’s Hall Museums as well. 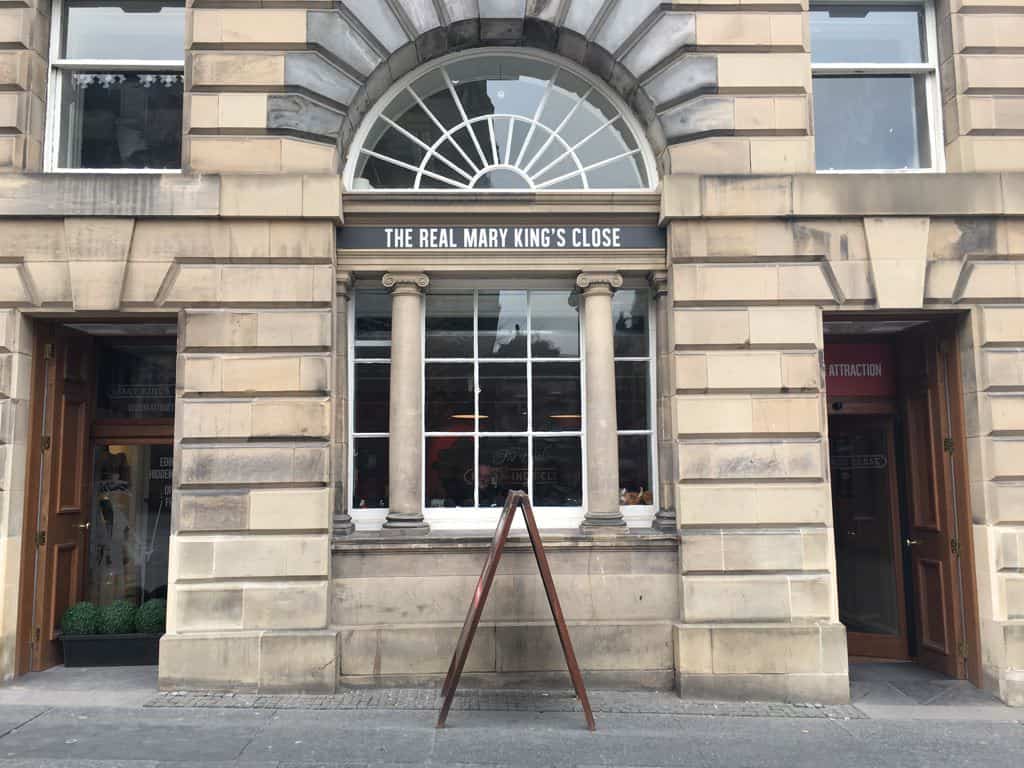 Edinburgh Castle is only closed on the 25th and 26th of December, so first time visitors shouldn’t be worried about missing out on this major attraction. While many people say the Castle is better from the outside, I do think you should visit at least once to appreciate it fully.

My first visit was in December and while it wasn’t at all how I pictured a castle (think traditional one large building rather than a fortress) it was something I’m happy to have done and would recommend.

Inside you’ll find the Crown Jewels, the Stone of Destiny (and learn the unique story behind it), Edinburgh’s oldest building (St Margarets Chapel), the Royal Palace, the Great Hall, the Scottish National War Memorial, the Prisons of War, and much more. 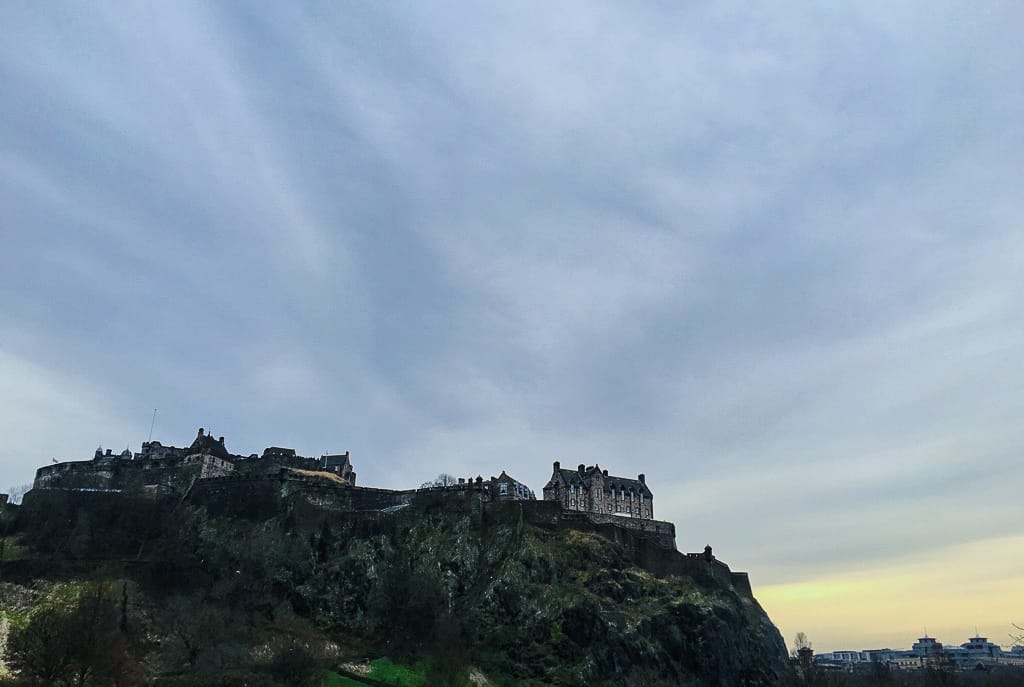 Walk down the Royal Mile

If you visit Edinburgh in August then the Royal Mile is packed with street performers, flyer distributors, and a ton of tourists. While it’s an exciting experience it’s also very crowded which makes it hard to really appreciate the actual street itself.

Visit the Royal Mile in winter and it’s a different story. You can take your time wandering along, appreciating the architecture and venturing down some of the many closes that lead to hidden courtyards, restaurants/bars, or even gardens. 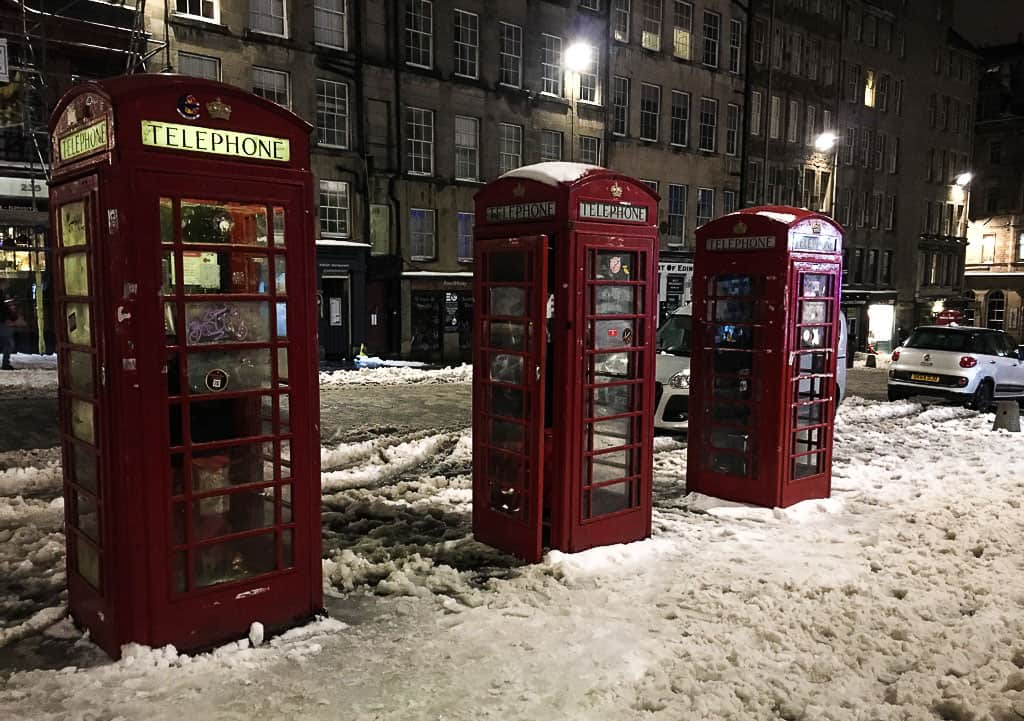 Another fabulous winter activity is Afternoon Tea. SO many restaurants and cafes around the city offer an Afternoon Tea that usually consists of a tiered stand filled with sandwiches, scones, and cakes, as well as all sorts of different teas. You can enjoy it in more informal settings like Eteaket or Mimi’s Bakehouse in Leith, or try something a little fancier at The Balmoral or The Signet Library. One of my favourite ways to spend a leisurely afternoon! 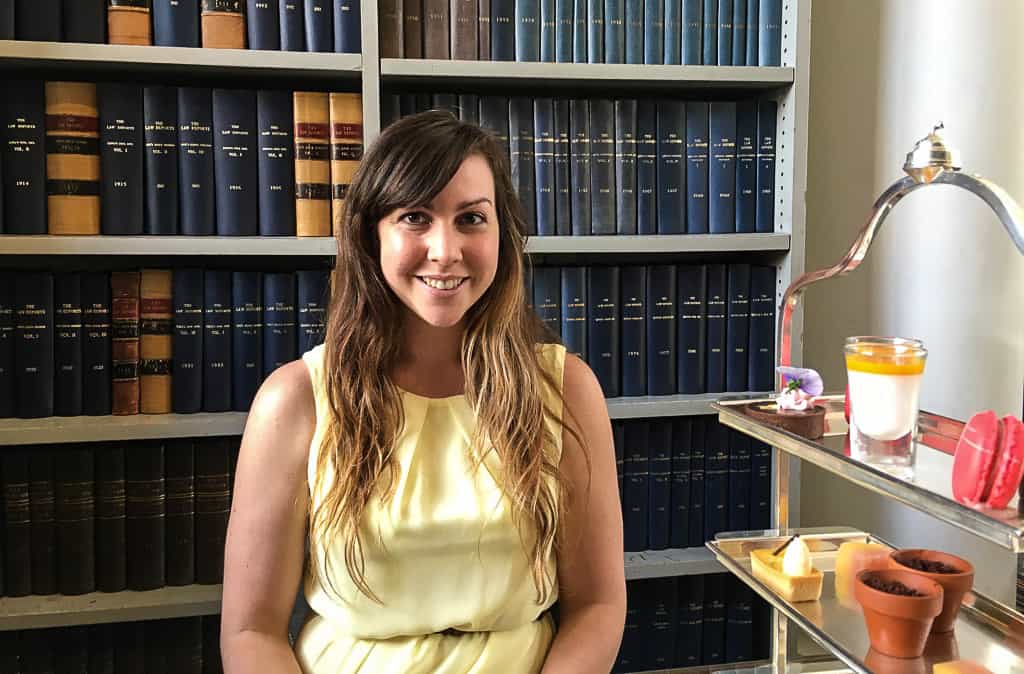 As mentioned Hogmanay makes winter a really fun time to visit Edinburgh. You don’t have to attend the Street Party however, there are other ways to enjoy it too. Check out all sorts of Hogmanay events across the city including other Ceilidh’s or activities, or find somewhere else to view the fireworks like Calton Hill or even from the Salisbury Crags/Arthur’s Seat. Just remember to bring a torch (flashlight)! 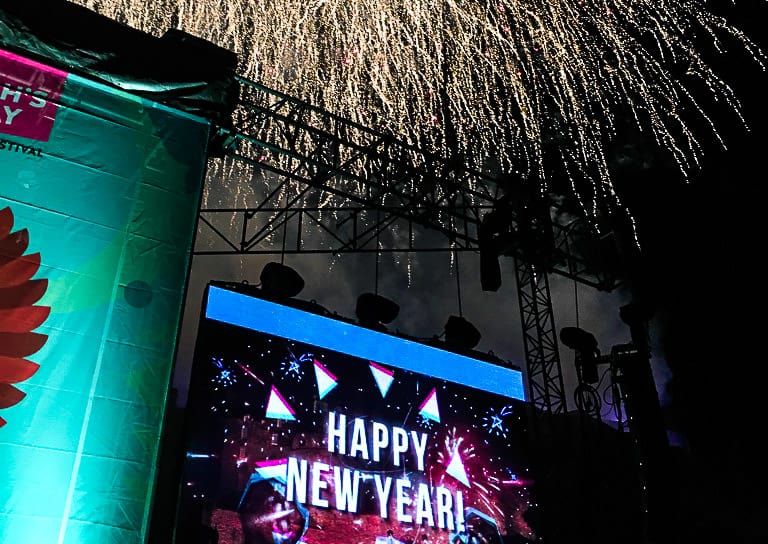 Like many places in Europe, off-season travel to Edinburgh has its perks. The streets are quieter and travel and accommodation are often more affordable (outside of the busy period directly around Christmas and Hogmanay) so it makes for a cheaper visit overall. Don’t be put off visiting Edinburgh in winter because it might be a little chilly. There are so many things to love about the city at this time of year, and it would be a shame to miss out because of the weather!

Planning your Edinburgh trip? Check out these posts: 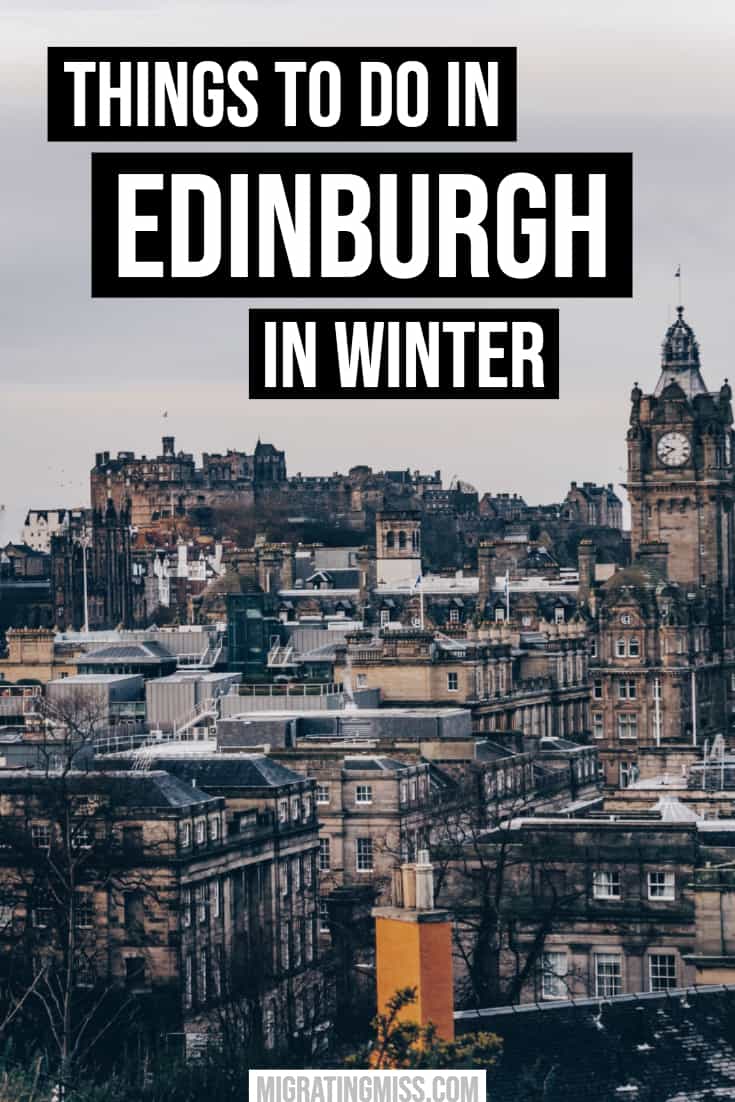