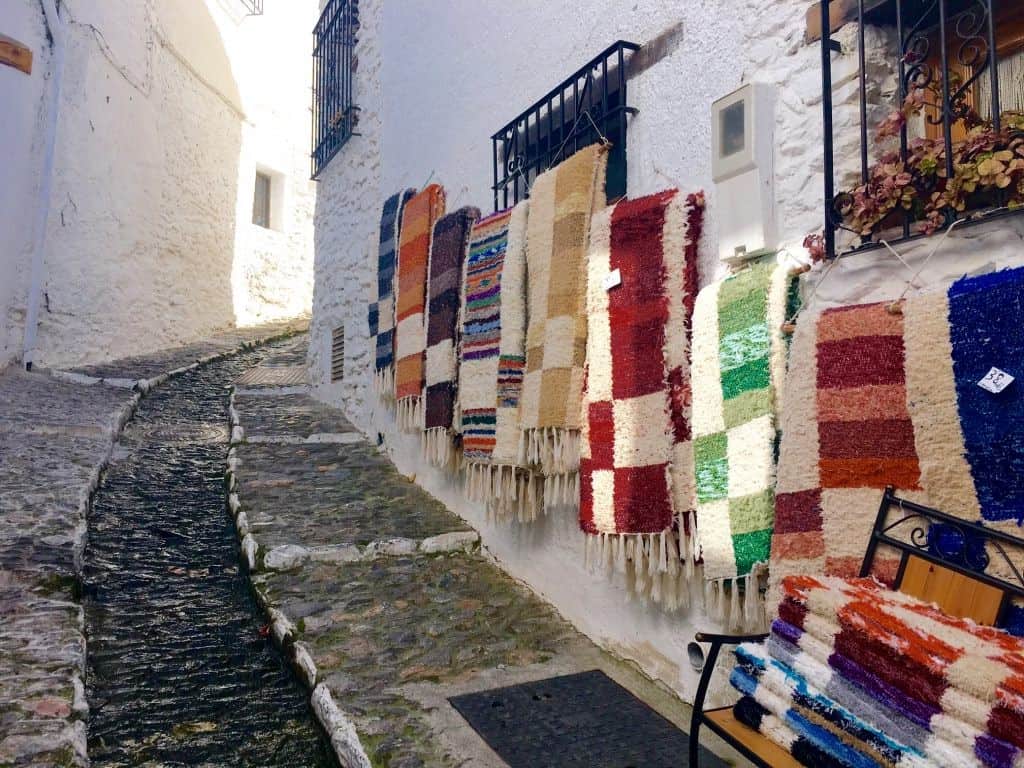 Haven’t heard of the Alpujarras? Neither had I! The Alpujarras are located in the Andalucian region of Spain (that’s the south) on the south side of the Sierra Nevadas. This part of Spain used to be inhabited by the Moors until the Catholic “Reconquest” lead to the Moors either being pushed out or having to convert to Christianity.

The villages of the Alpujarras are some of the last places where the Moors lived, and their isolation means they remained closer to their historical state than many other areas. For us now, this means pretty traditional white villages dotting the mountainsides and valleys of the southern Sierra Nevadas, right up to one of the highest villages in Spain, Trevélez.

Where to go in the Alpujarras?

The Alpujarras are a beautiful place to go walking and enjoy traditional Spanish food. Each village is unique, but it’s easy to get from one to the other in a short trip, with by walking the Alpujarras, taking public transport or driving. There are so many small towns in the Alpujarras it’s difficult to know where to begin.

We travelled from the coast and spent our first night we stayed in the gateway town of Órgiva. It’s not as pretty as the other towns and more of the service centre for the rest of the area, but it had decent and affordable accommodation. Hotel Mirasol was clean, spacious and had a huge balcony, all for €47 for a twin room. 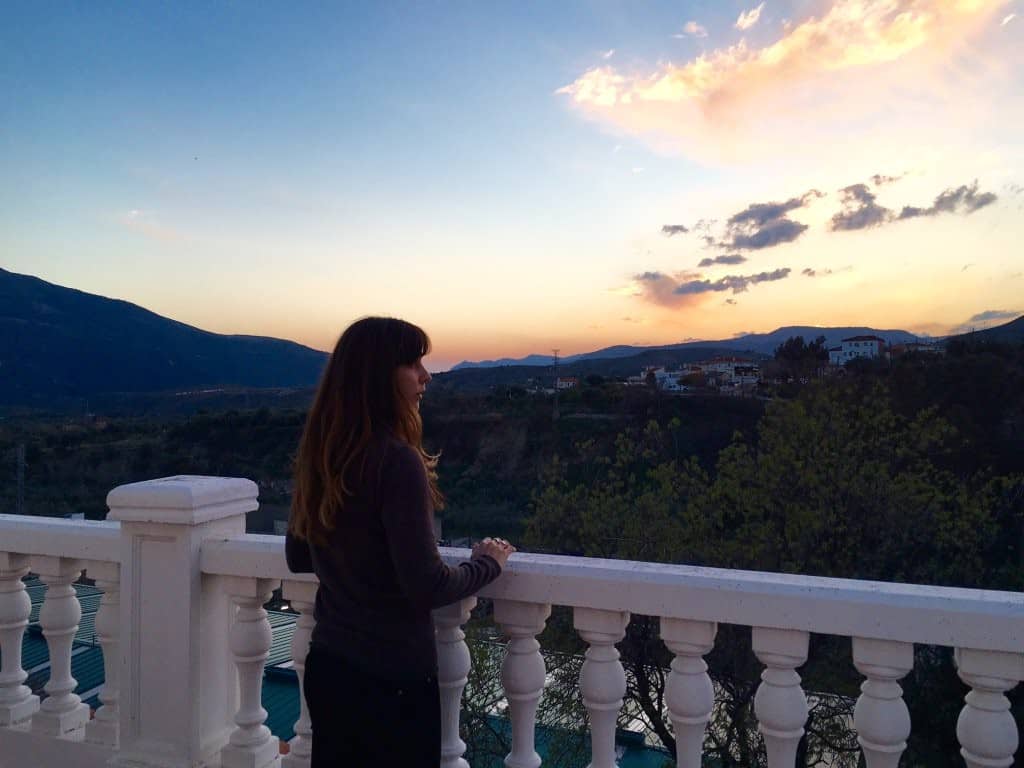 Three of the most well-known towns in the Alpujarras are Pampaneira, Búbion, and Capileira. They are all in the same valley and you can walk between the three.

The bus from Órgiva goes all the way to Trevélez, the highest village in the Alpujarras. If you time it carefully you could see a lot in one day, but because we weren’t sure of times we decided to stick to the 3 closer villages.

What to do in the Alpujarras?

The Alpujarras is a great place to see or buy local crafts. Everything from mats for olive pressing, cheese and butter making, to leathers, ceramics and colourful rugs can be found here. In some shops, you can see the artists making their wares, like the one I stumbled across in Búbion. The loom was next to a window overlooking the beautiful valley, what a place to work! 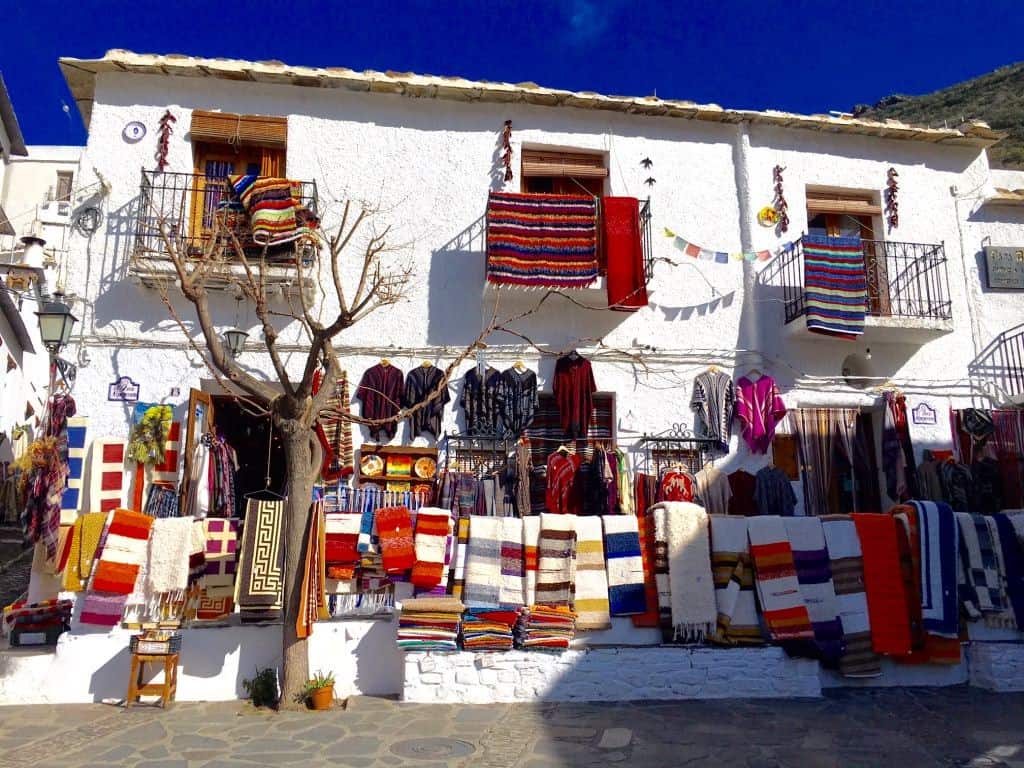 Alpujarras walking tracks are found between many of the villages, but some are definitely easier than others! Serious walkers could spend a lot of time here making their way from village to village. For not so serious walkers, Pampaneira, Búbion, and Capileira are a great option. You could go all the way to Capileira and walk down the valley to Búbion and Pampaneira. Although we found out the villages look much better when you look up at them rather than down, so if you can I suggest walking up instead!

The jamón (ham) in Las Alpujarras has a reputation for being some of the best, and particularly if it’s from Trevélez.

Migas is another traditional Andalusian food which I had tried once before, but the Las Alpujarras style made in Pampaneira was amazing! Migas is similar to couscous, but made of durham wheat, or sometimes bread. It usually comes with some kind of meat or offal, and this one had blood sausage and chorizo. Chorizo I love, and although I wasn’t so keen on the blood sausage it tasted really good. Add some sort of green leafy vegetable and oranges and you have amazingness on a plate. 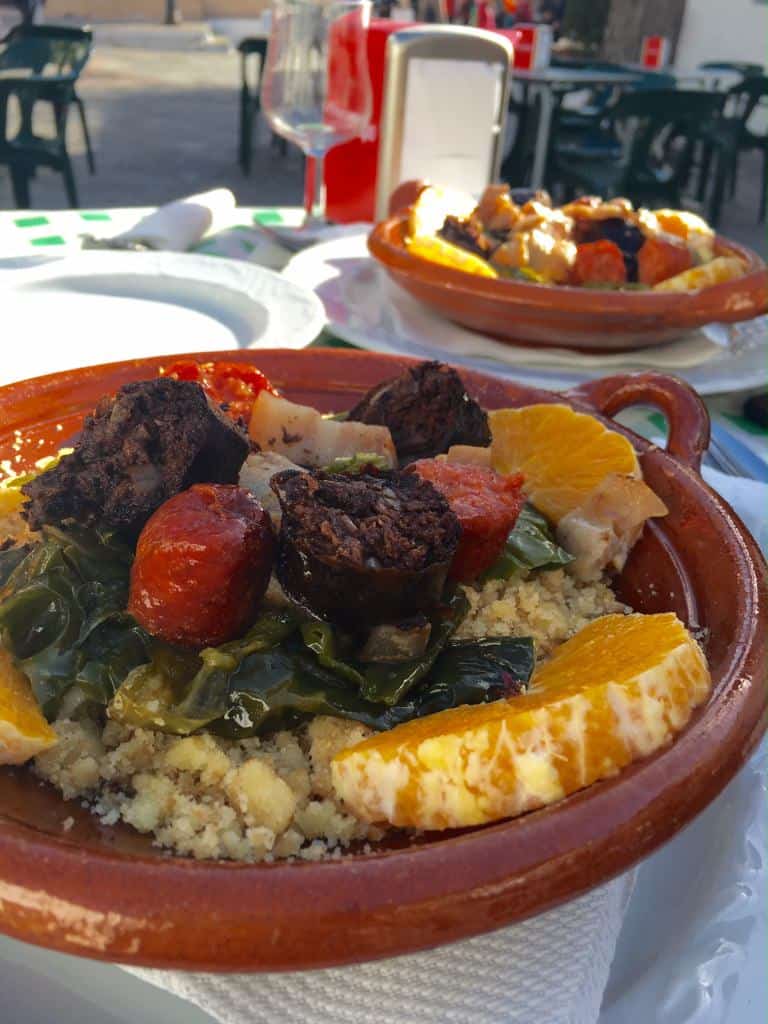 If you want to walk from Pampaneira to Búbion in Las Alpujarras, then walk as far to the top of the village as you can, higher than the old washhouse, and then head to the left. There’s a sign indicating your own the right path. It’s an easy walk, although it is uphill of course so you need a little fitness. This is what the right path looks like. 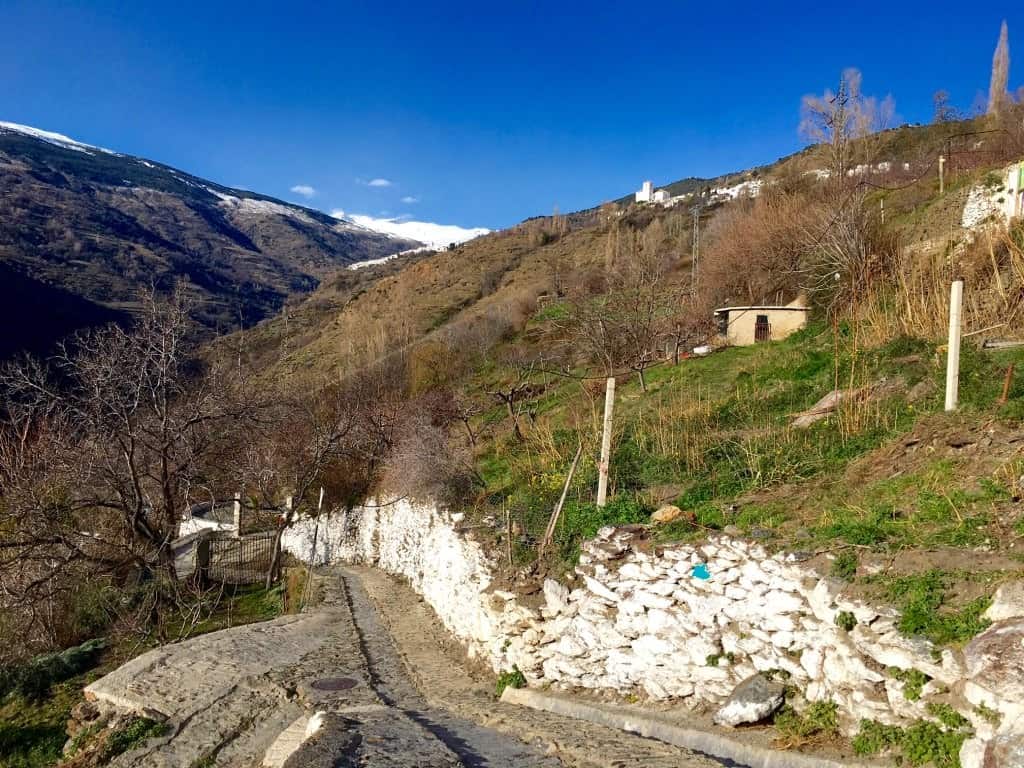 During the walk from Pampaneira to Búbion, you can see up and down the valley and pass through farmland. The path is easy to walk on and fairly wide and open, although it gets narrow in a couple of little places. Walking from Pampaneira to Búbion only takes about 30-45 minutes, depending on how often you stop for photos and how fit you are! We walked in February and it was already warm walking uphill, so I can imagine in summer it gets really hot. Luckily there is a freshwater fountain right when you get to Búbion so you can fill up with water there! 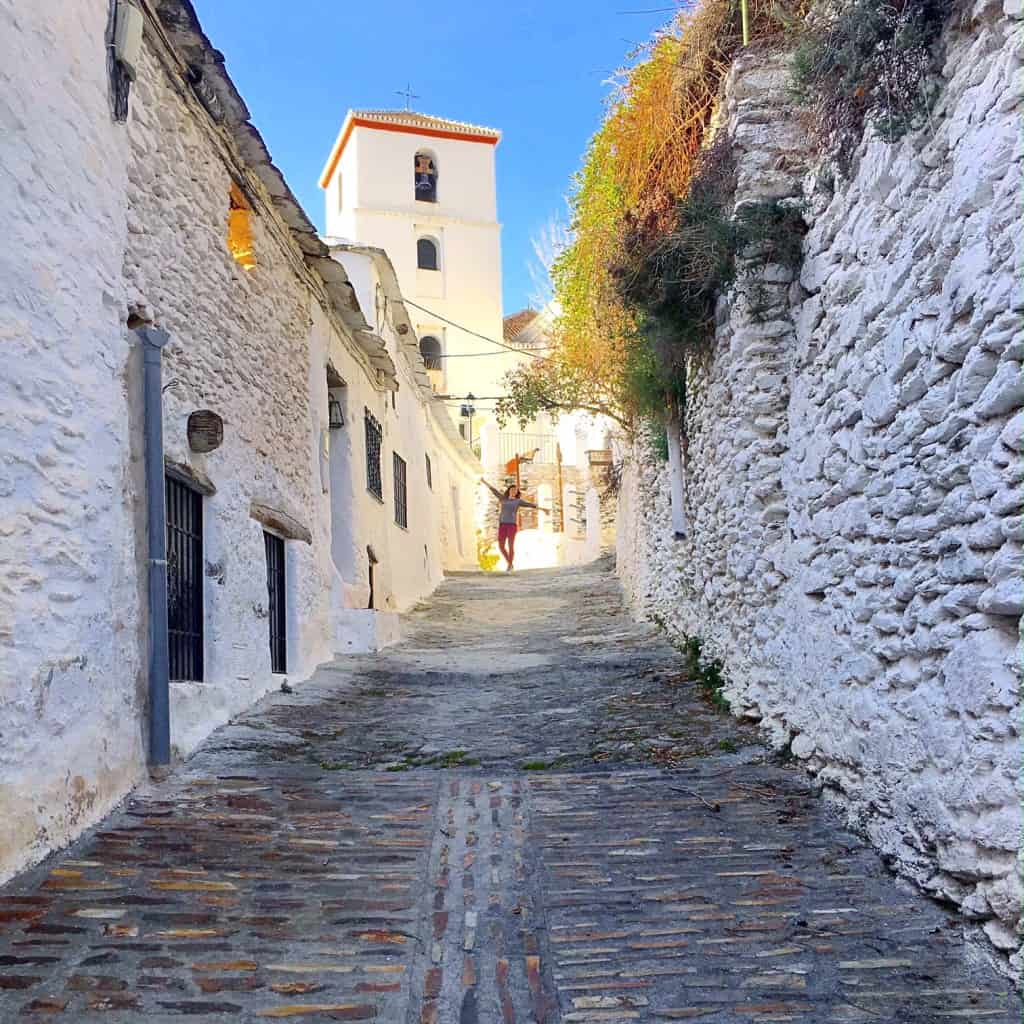 So above is the right way to go, but it’s not exactly how we did it the first time. Instead of being smart and asking for directions we just decided to wander around ourselves. We knew we had to head nearer the top of the village to start the walk, but we came across a path close to the top and decided it looked fun so we ventured down it. Plus there was a cat. And cats are cute. We figured the path was headed in the right direction and we would be able to cut further up to Búbion if need be.

The path was a beautiful little track, small and narrow, the opposite to the right path we walked on later in the day. We reached a point where we could see Búbion above us but had no way to get up to it because of steep ridges, so we decided we would just carry on (alarm bells? naaah). Instead of heading upwards the track went down to the river running through the middle of the valley. The scenery was beautiful, and we weren’t complaining. 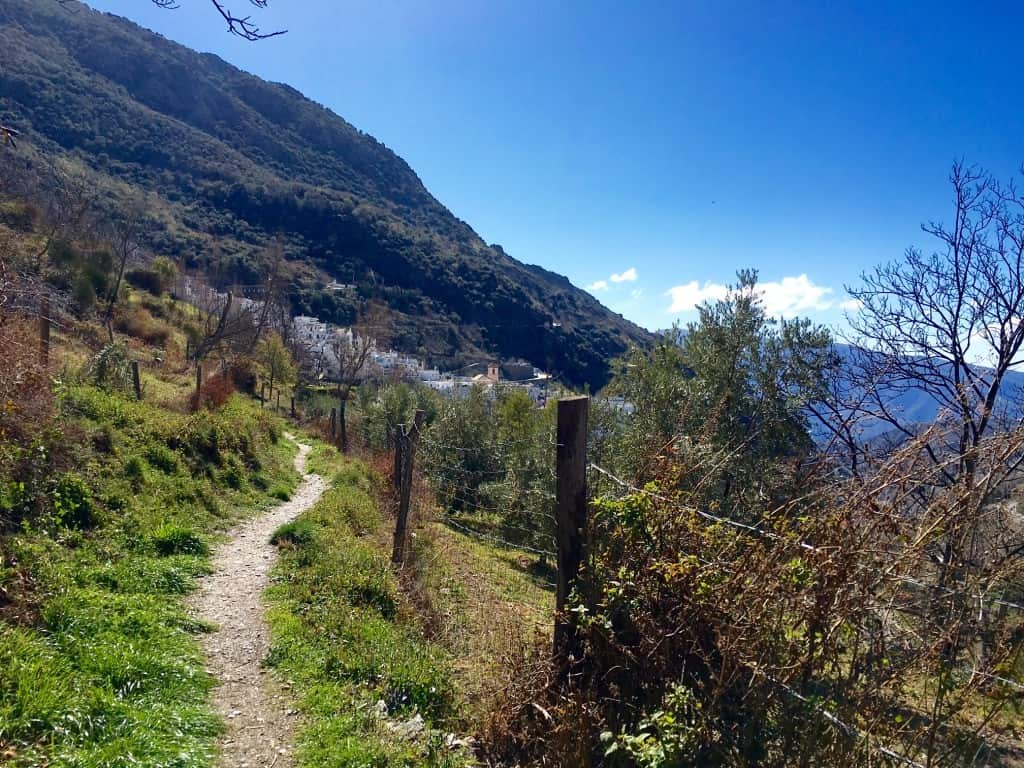 Enter our Spanish guide, a random person we came across. He directed us to continue on the way we thought to reach Capiliera instead, so we did and as we walked we passed two groups of walkers coming the other way so we knew we must be headed in the right direction. Then all of a sudden the track ended at a waterfall. We didn’t know if we were meant to go through it, or if we had missed a turn. We tried through the waterfall and went back to look for a missed turn. Nothing. We tried climbing a steep cliff, but it didn’t really work that well. Maybe now would be the time to mention I was wearing converse sneakers, not actual walking shoes. Hmm. After much indecision, back and forth walking along the same piece of track, googling and wondering if we should cross the river, we decided to head back to where we started. All of us refused to admit defeat

After much indecision, back and forth walking along the same piece of track, Googling walking in the Alpujarras and wondering if we should cross the river, we decided to head back to where we started. All of us refused to admit defeat though, because going “off the beaten path” ended up being much more fun and beautiful than the proper track to Búbion. 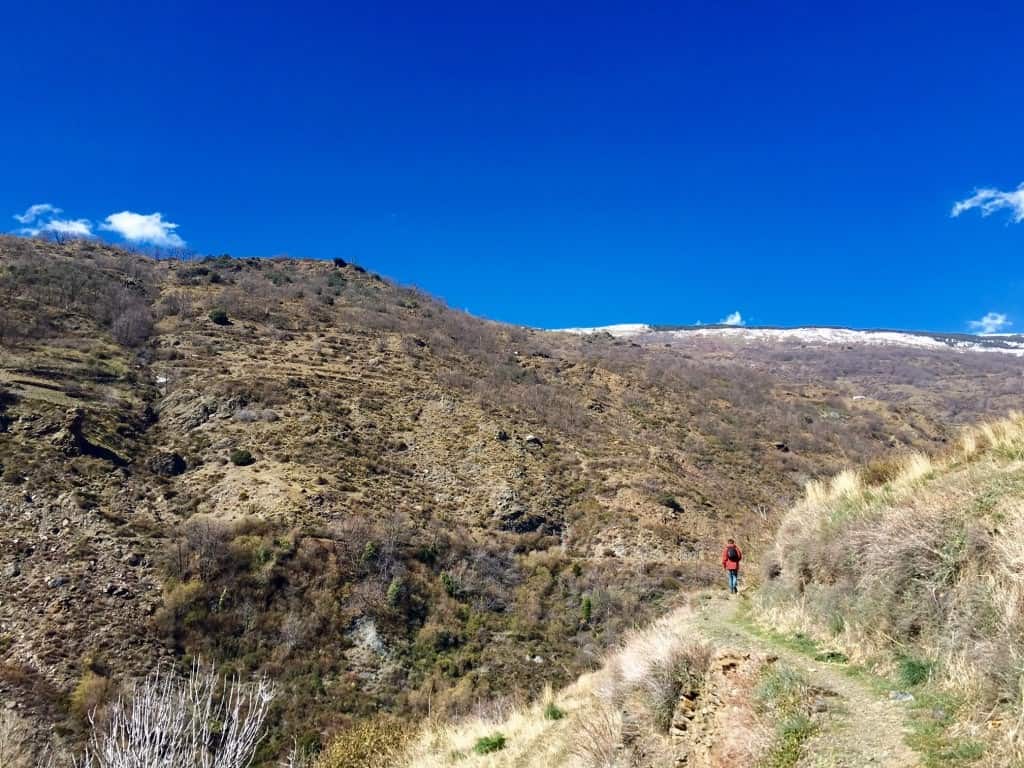 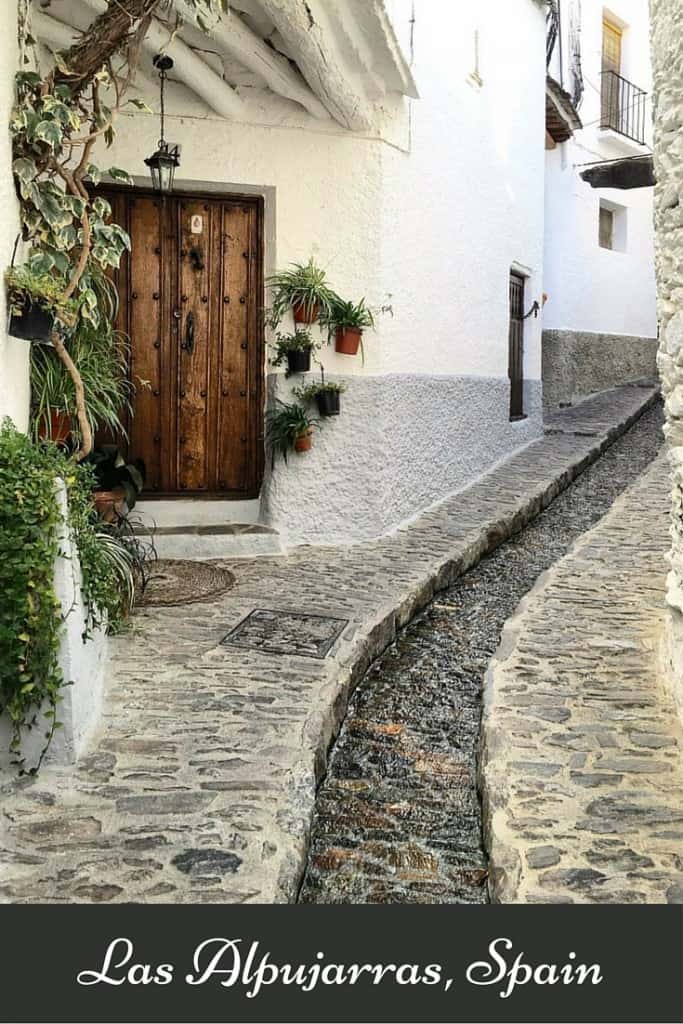