Welcome to the monthly update on Migrating Miss! This blog isn’t always in chronological order, or about everywhere I go, so this where you can find extra trip tips and things to do, plus what’s coming up.

August means festival time in Edinburgh, with five of the major festivals running through the month, and with special 70th anniversary celebrations! But my head is still in the last month! So what were the destinations of July?

The North Coast 500 has been called “Scotland’s Route 66”. It starts in Inverness and circles around the top of Scotland. It’s kind of funny though because it’s not like it’s a new road, it’s just that it’s now being marketed as the ultimate Scotland road trip!

On our way to the northern isles, we drove the eastern part of the North Coast 500, from Inverness up towards John O’Groats, the northerly most village in mainland Britain. We spent a night in a Shepherds Hut in Brora, one of the coolest Airbnb’s I’ve ever stayed at! (If you use this Airbnb link to get £31 (or equivalent) off your first stay with Airbnb).

Tip: Accommodation can be hard to come by in some spots around the North Coast 500, especially in summer. You’ll either need to be flexible with your budget, location, and style (camping anyone?) or think about booking ahead!

Also, don’t miss the “secret” Whaligoe Steps in the east! It’s not signposted but look for the sign pointing inland to Cairn o’ Get, 7 miles south of Wick. Take the opposite road and you’ll find it! 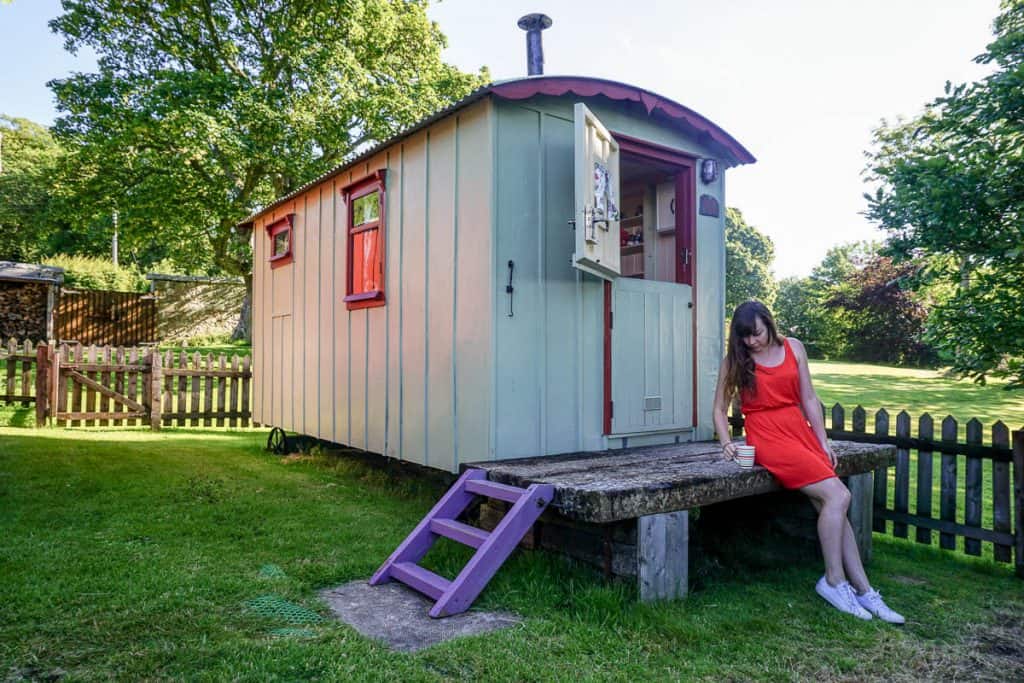 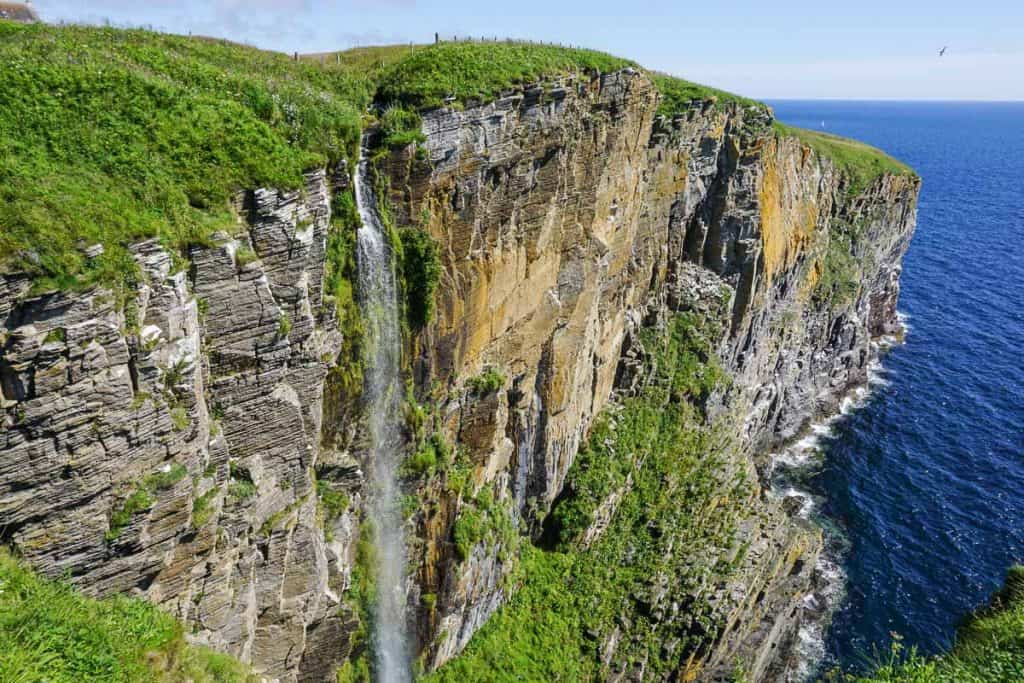 My visit was far too short but I did as much as I could! Orkney is a group of islands off the north of Scotland, with a huge concentration of neolithic sites that are up to 5000 years old. I absolutely loved exploring these ancient sites that Orkney is so well known for, but I was equally intrigued by the islands connections to both World Wars and the beauty of the island of Hoy.

The walk to the Old Man of Hoy was stunning and definitely worth it, not to mention the other sites on the island.

Tip: If you’re going to see 3 or more of the sites that are part of the Orkney Explorer Pass (which also includes Jarlshof in Shetland) then it’s worth it! Also, in summer for a few extra ££ you can take a guided tour of Skara Brae after hours and actually enter the 5000-year-old buildings!

I’ve always felt a connection to Shetland because my great grandparents emigrated from there to New Zealand. Last time I visited Shetland in winter so I was really excited to get back in summer and experience the long days. Not to mention UnstFest, a festival on the northerly most islands in Britain and where my family is from, was on while I was there!

Another new addition to the island since my last visit is a Gin distillery, Shetland Reel. As a small distillery, they have a lot of flexibility and have come up with several intriguing Gins including one with seaweed and another with citrus that are part of their regular line. Let’s just say I have a few more bottles of gin at home on the shelf now…

I have SO MUCH to say about Shetland but I’ll leave it at that and get onto the posts ASAP!

Tip: The ferry from Aberdeen to Shetland can be really busy in summer. If you’re taking a car then you definitely need to book earl or be flexible at peak times. July is a great time to see Puffins at Sumburgh Head Lighthouse! 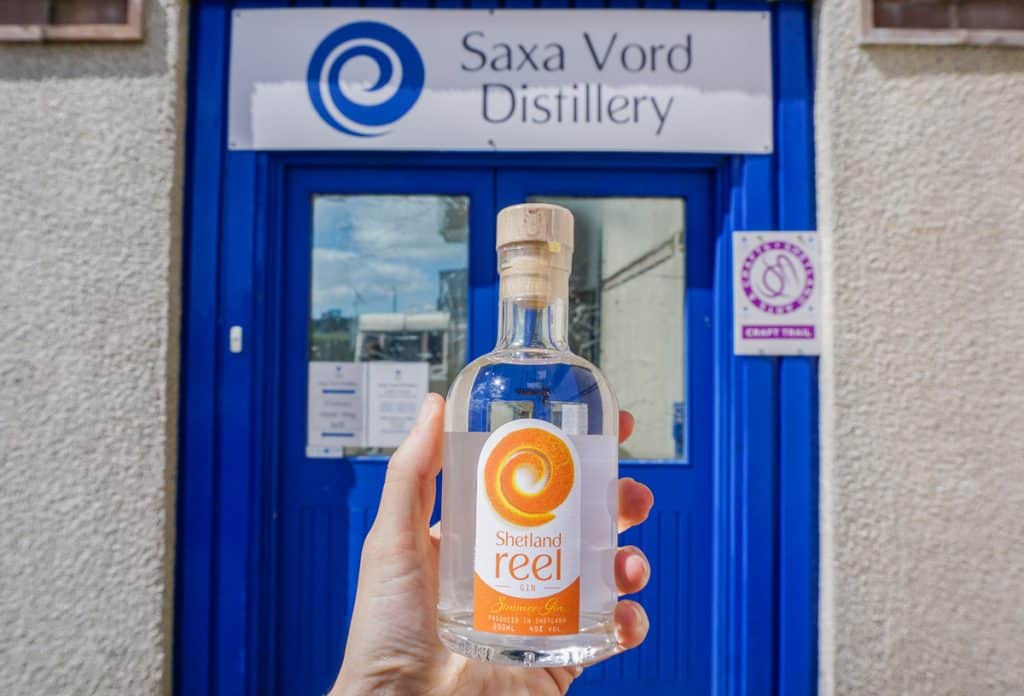 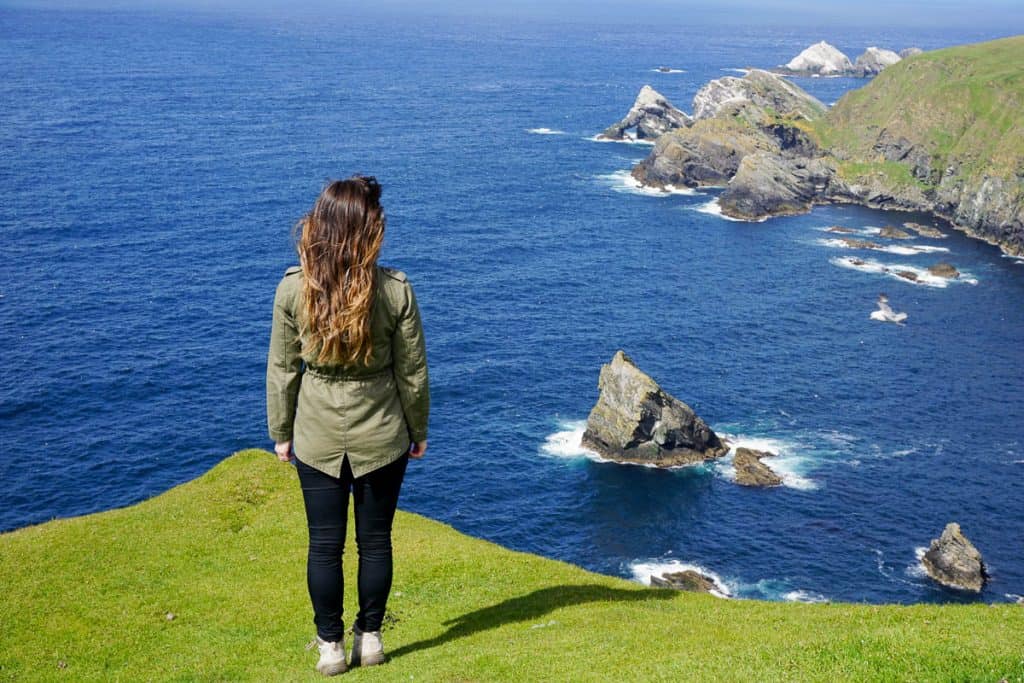 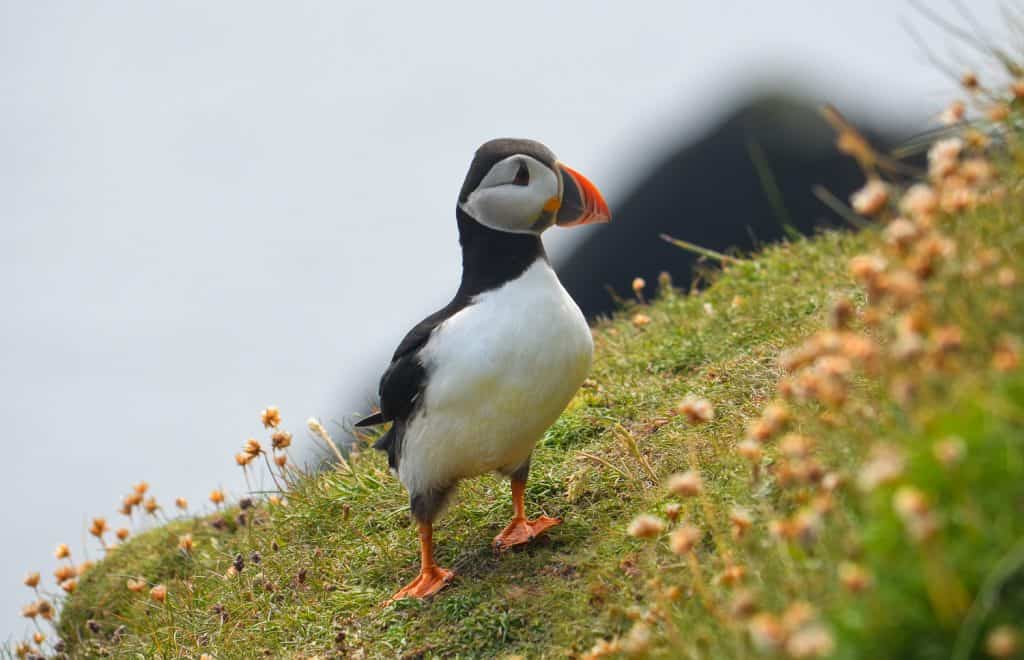 Expat life in Edinburgh continues, although it feels more and more like home! Especially as we’re currently redecorating our home, which is also really weird. I love travelling, but having a home base and community is important too!

This month I went along with Edinburgh Festivals to see some of the new venues being used for the Edinburgh Jazz & Blues Festival and catch a couple of different acts. Edinburgh always has something going on!

EB and I escaped to London for a weekend and ended up having quite a historic city break. We went to the Churchill War Rooms which I’ve wanted to see for ages. They’re where Churchill ran much of the war from and broadcast several of his famous speeches.

Later that night we went to a pop-up secret underground bar where we used replica enigma machines and a switchboard radio system to code and decode clues that would allow us to receive completely unique cocktails. It was awesome!

Visiting London always gives us a chance to catch up with family, so we went out in a few different areas, including a trip to a Big Easy for bottomless brunch that consisted of unlimited BBQ food, prosecco, mojitos, and beer. It was as amazing and sickening as it sounds!

Tip: Bywater Street in Chelsea is a great place to see colourful houses in London. However, check the next street over too, and others in the area because there are some less popular but just as beautiful places! Also, the bar we went to was so much fun, and it won’t be around forever! 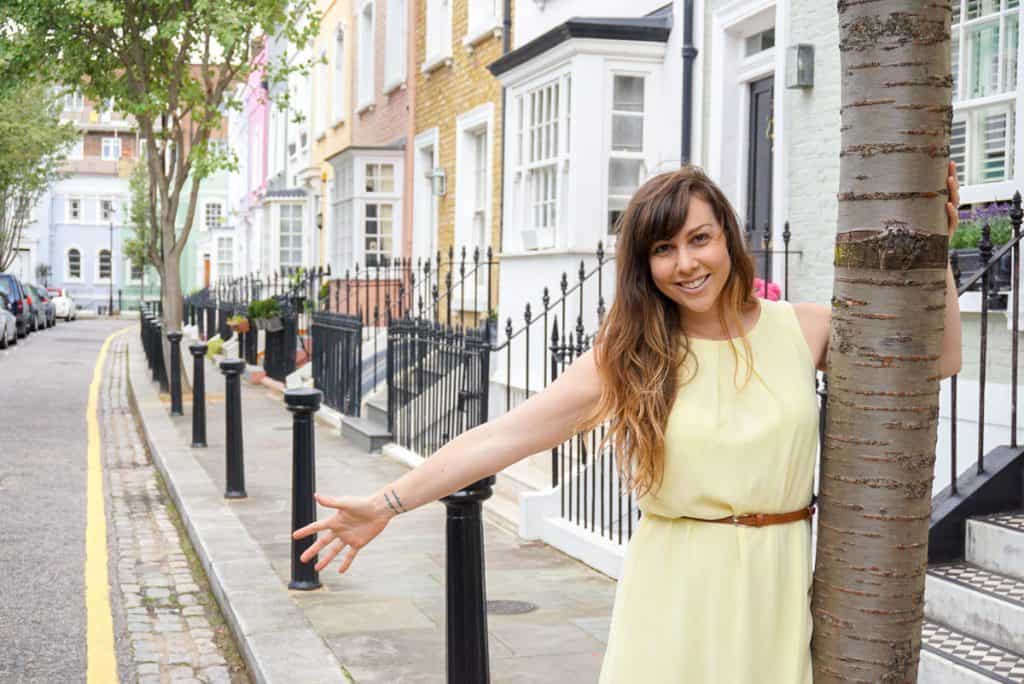 All of it! This month was a really great one. But if I had to choose it might be spending some time tracing my family history in Shetland. I’ve always known about the house that my great grandparents lived in before they went to New Zealand, but I was also able to walk through the stone ruins of the croft house my 4x great grandfather lived in, and possibly my 6x great grandfather. That was pretty amazing. 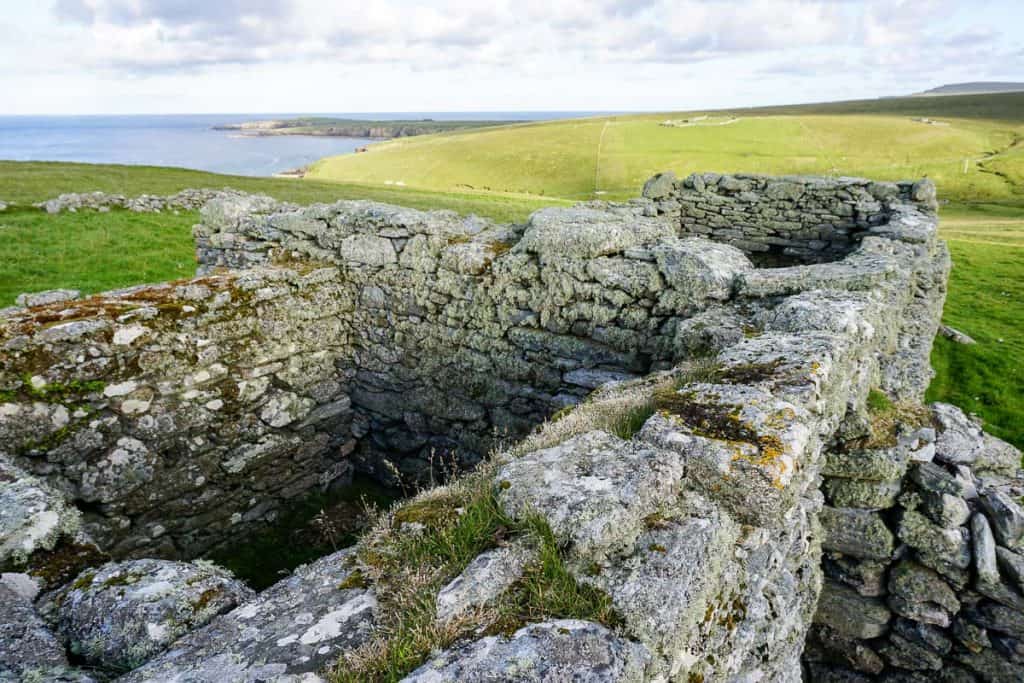 I really can’t think of anything, except the usual travel issues like a couple of slightly delayed flights to and from London, and maybe the man snoring so loudly on the overnight ferry to Shetland that there was no way I was sleeping that night…

I wrote last month about our trip to Finnich Glen, but here’s the post telling you how to visit this hidden glen and Outlander filming location. Plus video!

This is a well overdue post about all the travel safety tips I’ve learned from travelling over the last… way too many years!

How to Visit the Old Man of Hoy + Other Hoy Attractions, Orkney

I love getting close to nature when I travel and having to walk to see this wonder just made it even more of an adventure! There are also plenty of other things to see and on Hoy in Orkney, and I would definitely go back and spend more time there. 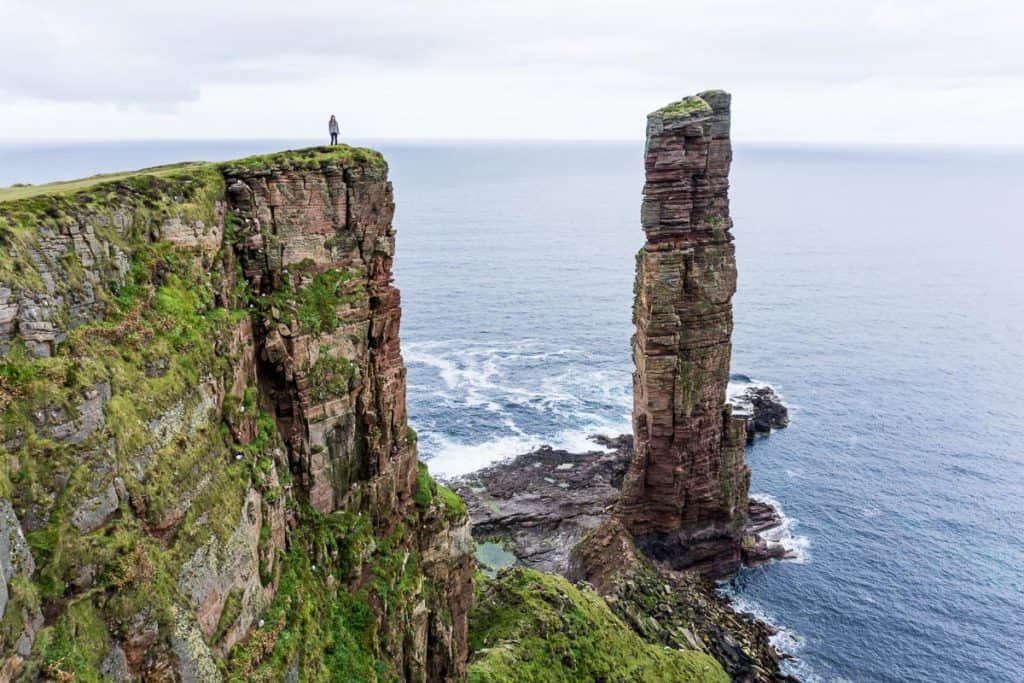 I loved my year in Spain, and I’m always happy to add more Spain interviews to my Expat Interview series. Seville is a beautiful city, and if you’re wondering what the expat life there is like then this one’s for you.

And that was July! August was supposed to be a quiet one (if you can call living in Edinburgh during festival time quiet), but it’s already shaping up to be another month of local adventures. Can’t wait!

How was your July?