Heading to New York for the first time and looking for the perfect four-day NYC itinerary? Look no further! Hmm, that sounds super salesy… But seriously, I first travelled to New York when I was living in the USA at 17, and then I didn’t go back until 25. Both times I felt like a newbie, and I had no clue where to really start on creating an itinerary for my four days in New York, which is about the amount of time I’d recommend for a first trip if you can spare it. With a four-day itinerary for NYC, you’ll be able to hit up all the hot spots with a few added bonuses! 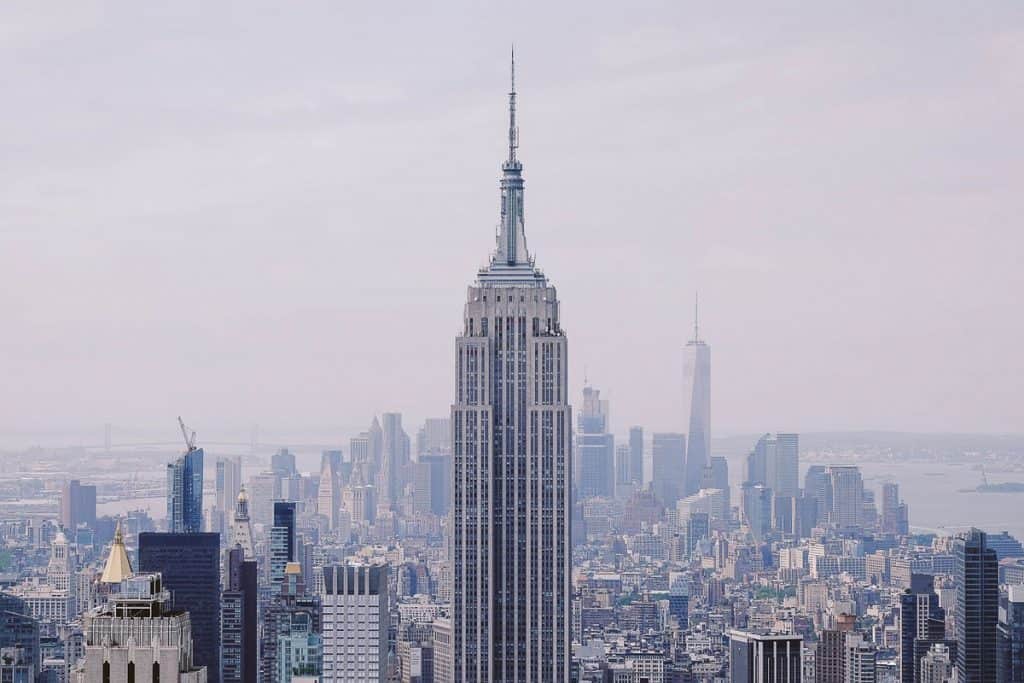 Now of course, exactly where you go and what you see is based on the things you like and where you’re staying. Originally, I was going to split this guide up into things to do day by day in New York, but then I realised it depends on when you arrive and leave, plus what things are the most important to you.

Instead, I’ve grouped together the things you should definitely plan to see within your four-day New York itinerary and that are close together, then it’s really up to you what order you see them in! You can duck and dive between the different areas because as you’ll be able to see, there’s more to do in some areas than others.

If you get to the end of your four days in New York and you’ve managed most of this, then you’ve covered the basics and next time you take a trip to New York you’ll be able to delve a bit deeper into this awesome city.

Things to put on a 4-day itinerary for NYC

All of these places are pretty iconic, but if you really want to feel like you’ve arrived in New York, I’d recommend starting with Midtown Manhattan.

You really feel like you’re in New York when you emerge from the subway into Grand Central Terminal. I love looking up at the painted constellations and watching all the people buzzing around to who knows where! 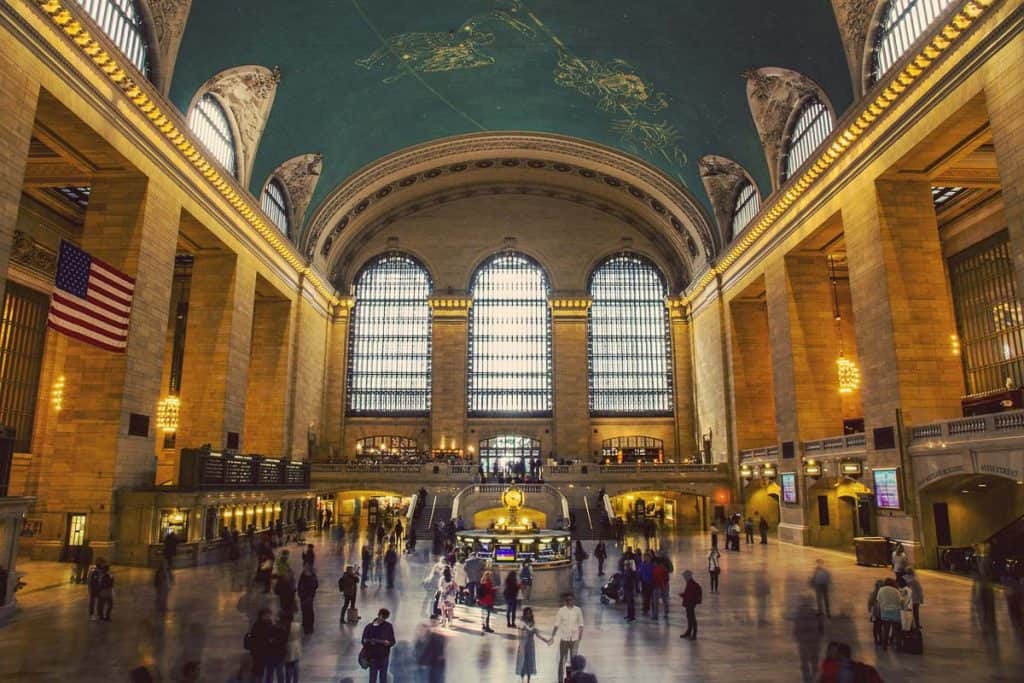 Who knew a library could be so beautiful? This is the largest library in New York and the second largest in the US. I definitely wouldn’t have minded coming here to study during university! Within your 4 days in New York you should pass it at some point, so I recommend going in to check it out. 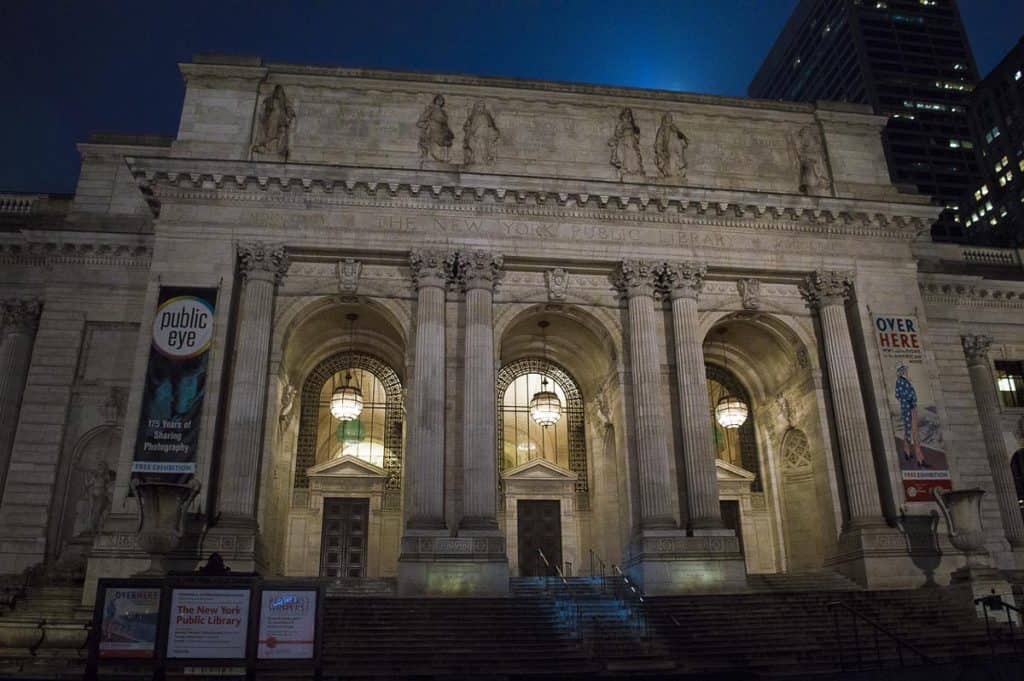 Opened in 1939 and in Art Deco style, the Rockefeller Center is another iconic New York building you have to see during your 4 days in the city. Venture up to the “Top of The Rock” as an alternative to the Empire State Building, and that way you’ll get it in your photos too!

Book a Flexible Date Ticket for the Rockefeller Center here 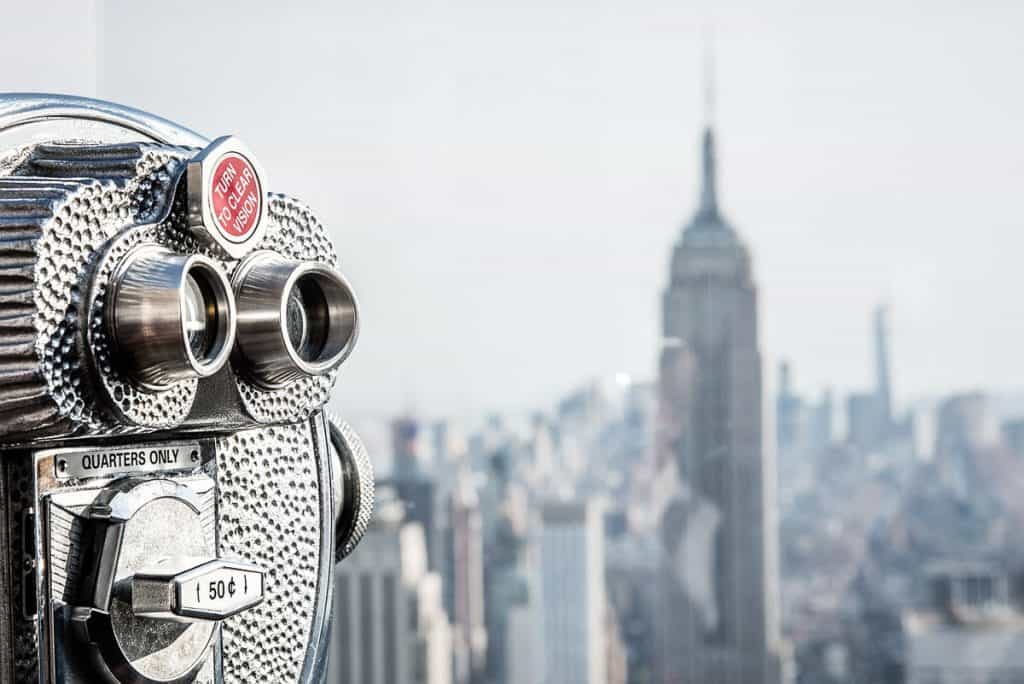 The inside of the Empire State Building is almost (ALMOST) as breathtaking as the view from the top. It’s Art Deco at its best! Some say the best time is sunset, when you can experience it during the day and as the night falls and all the lights turn on across the city. It’s also popular though, so plan ahead!

Book your ticket here and skip the line! 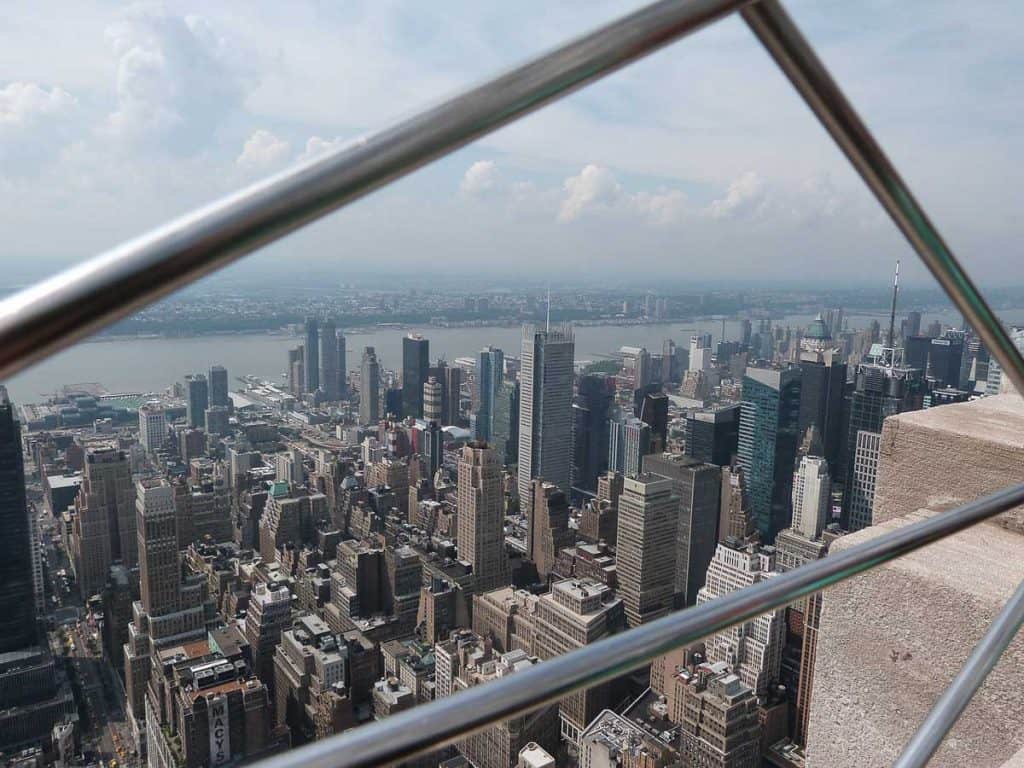 I want to say this is another iconic place, but let’s face it, everywhere on this NYC itinerary is! Times Square is a touristy place usually packed with people both day and night. You can eat, see a show, visit some of the huge stores or just people watch. 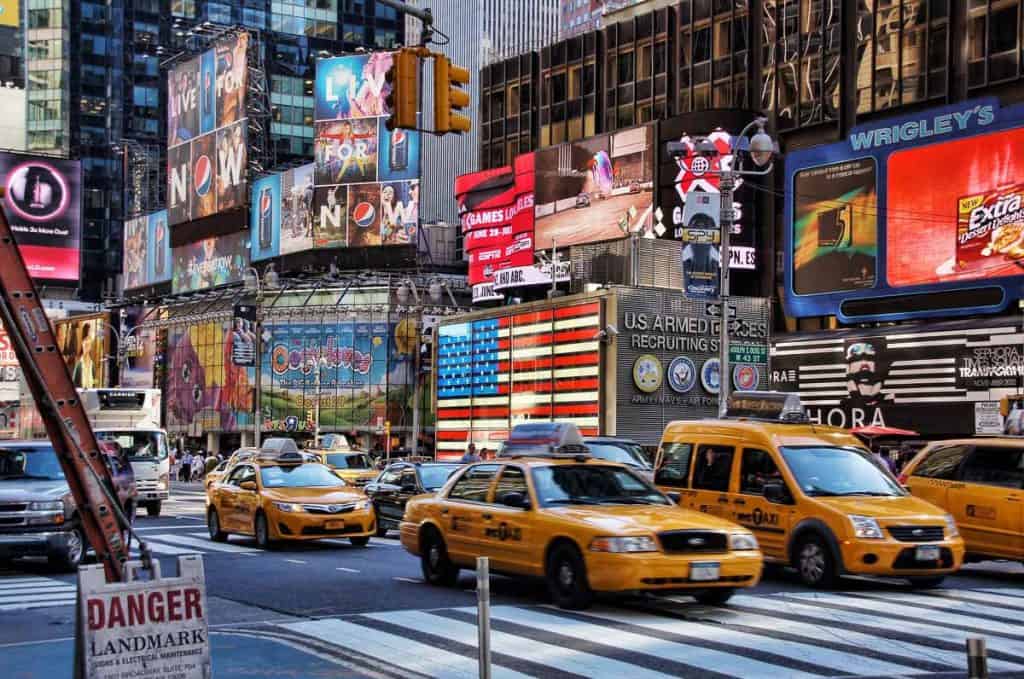 Seeing a Broadway Show is definitely a first-timer in New York activity. You can plan ahead, or get discount tickets from the TKTS Offices around the city. My first time in New York I saw the Phantom of the Opera! 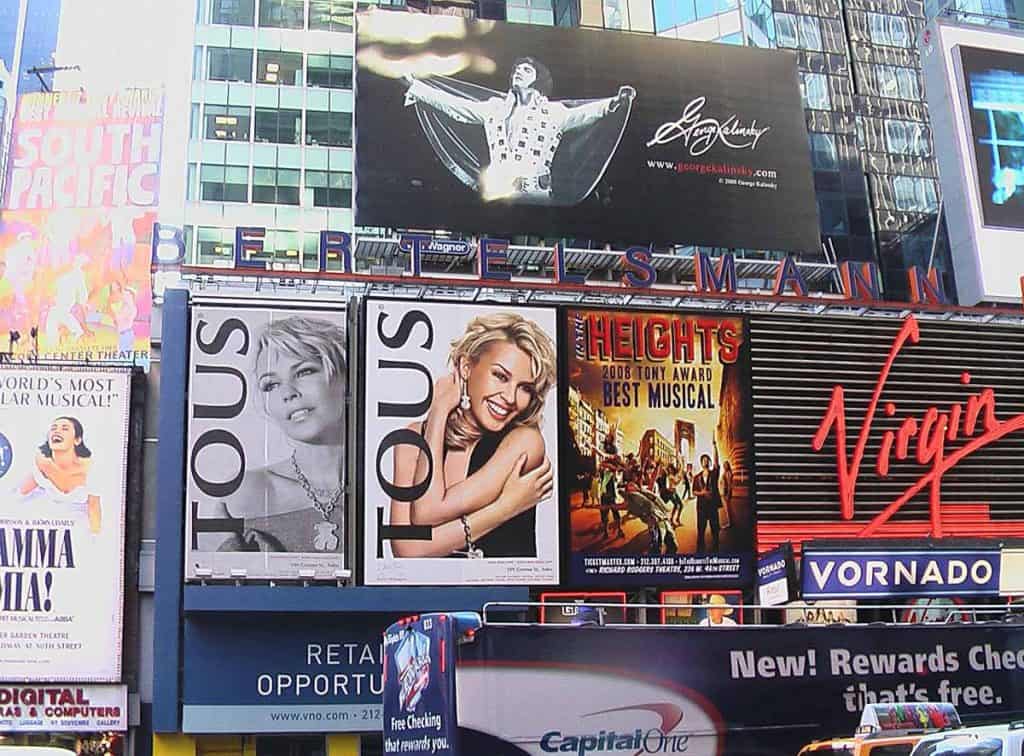 230 Fifth Rooftop Bar – Another spot for views over Manhattan, and this time with a drink! Sip a cocktail while you gaze across to the Empire State Building… because New York.

St Patrick’s Cathedral – You’ll wander down 5th Avenue anyway, so check out St Patricks Cathedral on the way to the Rockefeller Centre.

Uptown Manhattan is more about chilling out than buzzing around like in midtown. During one of my New York visits, I spent about 3 hours in Central Park reading a book! It’s tempting to pack as much as possible into your 4 days in NYC, but time some time to relax and soak in the atmosphere of the city too.

Central Park is HUGE. There are so many paths everywhere to walk, run or cycle around. Don’t miss Strawberry fields, a landscaped section of the park dedicated to John Lennon. There’s also a lake where you can hire boats, and the Alice in Wonderland statue. 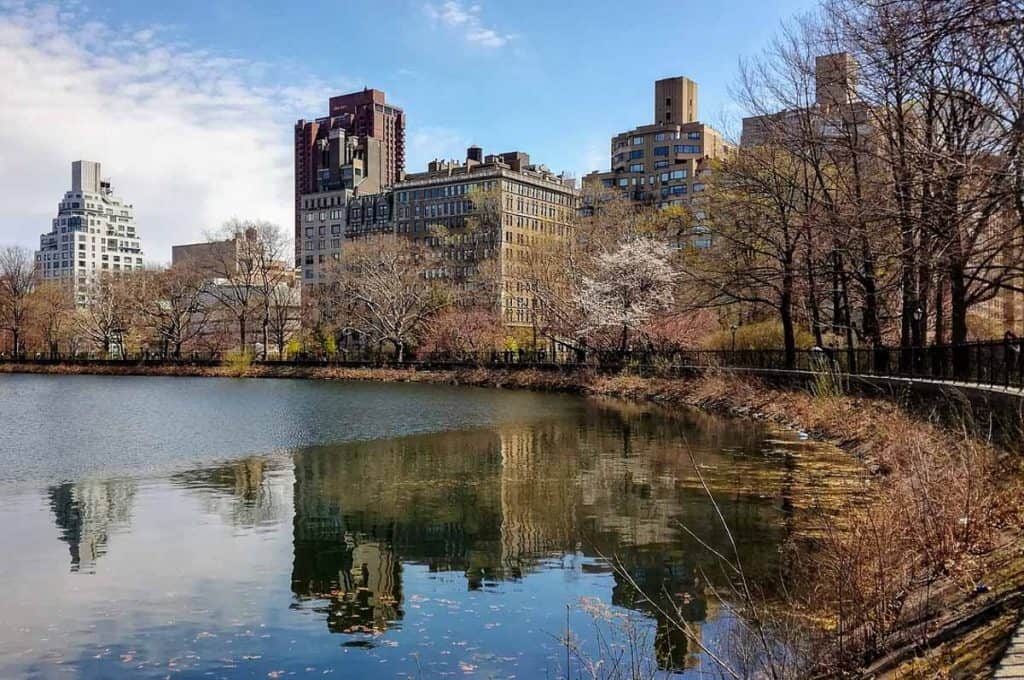 Dotted around Central Park are some of the famous museums of New York. There’s the Metropolitan Museum of Art, one of the biggest museums in the world, and the American Museum of Natural History, made famous by Night at the Museum, which both suggest donations but are technically free. There’s also the Guggenheim Museum which is $22USD. 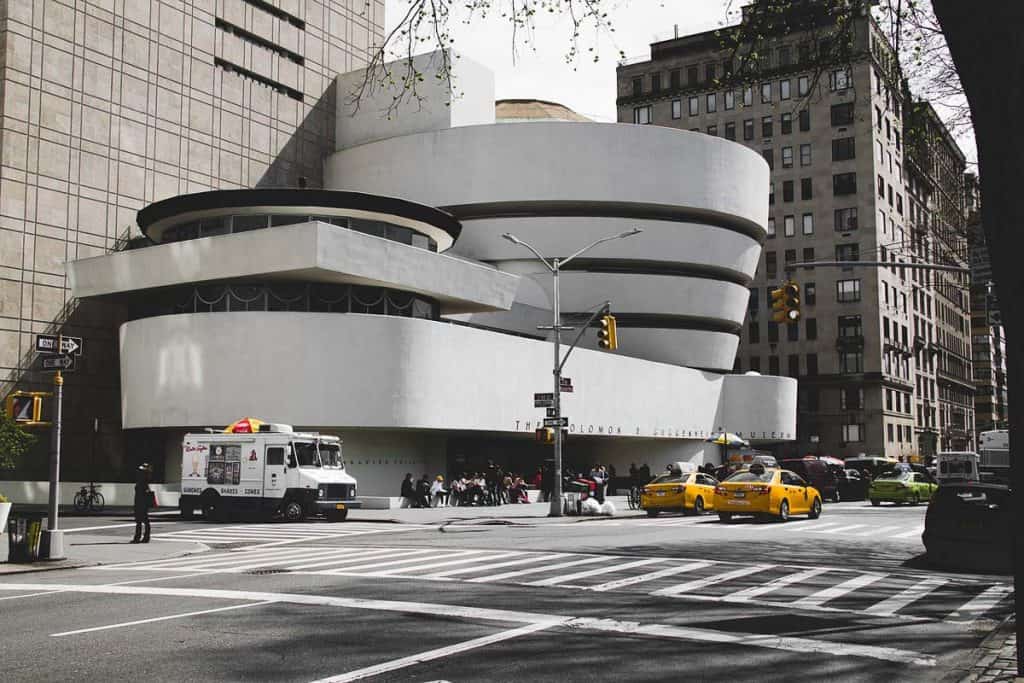 The Cloisters – Much further away but apparently well worth it. A museum of European medieval architecture.

Once again, there’s a LOT to do in Lower Manhattan. You might want to plan to spend more than one of your 4 days in NYC doing parts of it. For example, visit the Statue of Liberty & Ellis Island early one day before you head up to Central Park.

It’s a 25-minute walk across the bridge to the park on the other side where you can look back at downtown NYC. 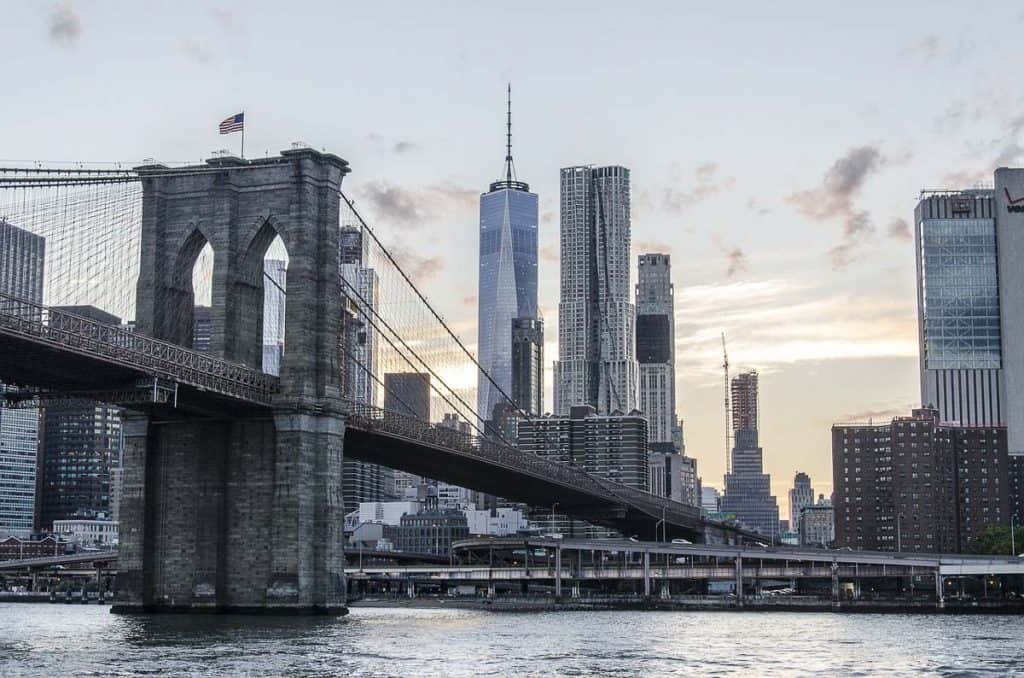 The first time I went to New York was in 2005 when the land where the Twin Towers once stood was still being worked on. On my second visit, I was able to go to the 9/11 Memorial Site, where there is a park commemorating the victims of the terror attack. It’s a very moving place and seems so small to have housed such huge buildings.

You can also take the elevator to the top of the One World Trade Centre “Freedom Tower” which is the tallest building in New York (and the Western Hemisphere). 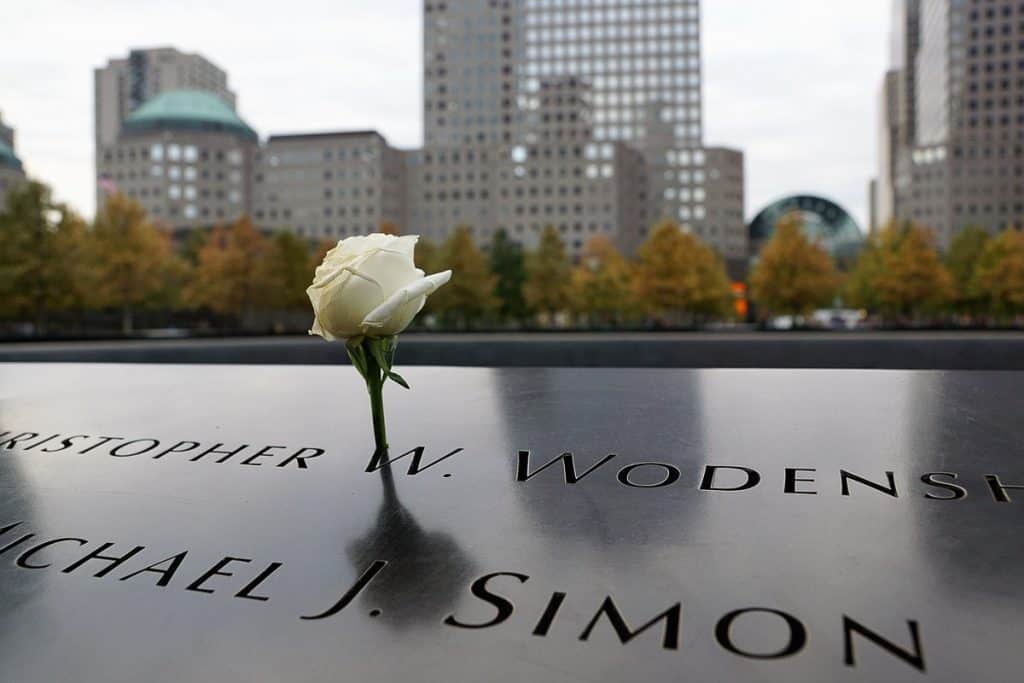 Located close to the World Trade Centre site and used as a point of refuge after September 11, the Trinity Church is one of the oldest in the USA. The colonial graveyard is the final resting place of famous Americans from that time.

Home to the New York Stock Exchange and Federal Hall. You can’t see too much but it’s interesting to walk along and people watch. You can also take a picture of the famous charging bull. 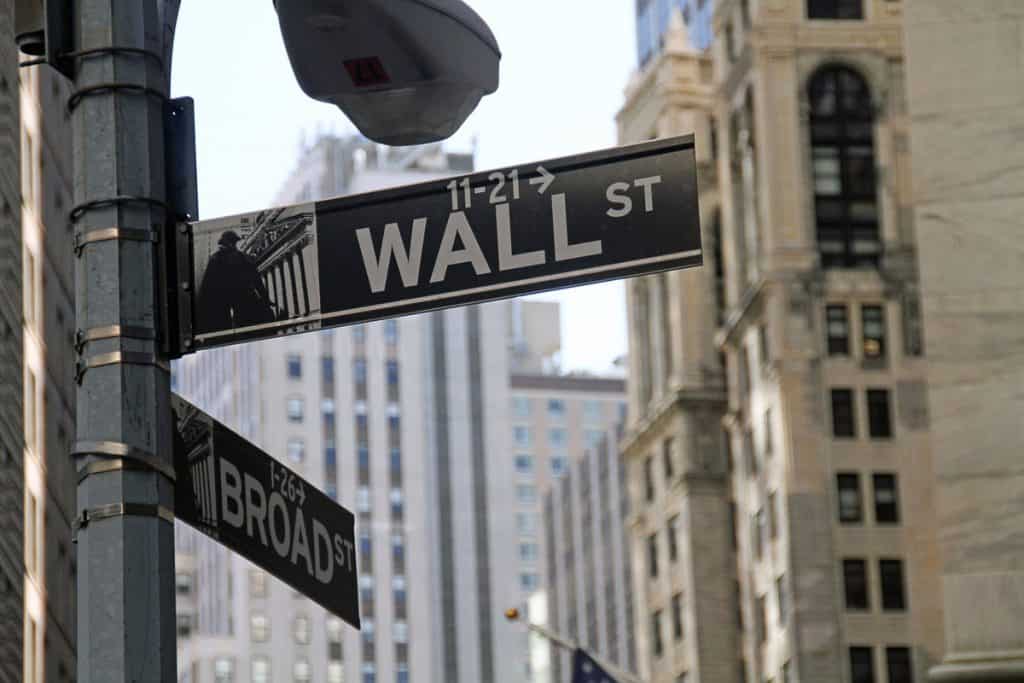 You’ll walk through here to get to the ferries to the Statue of Liberty or the Staten Island Ferry and there are great views of the harbour. It’s usually full of street performers and people relaxing.

Although the line can be long (I recommend coming early) it’s worth it to see the State of Liberty up close. It appears small from the top of the likes of the Empire State Building, but up close, it really is as big as you might have imagined. I also really enjoyed the stop at Ellis Island where you can learn more about the immigrants who can through here. 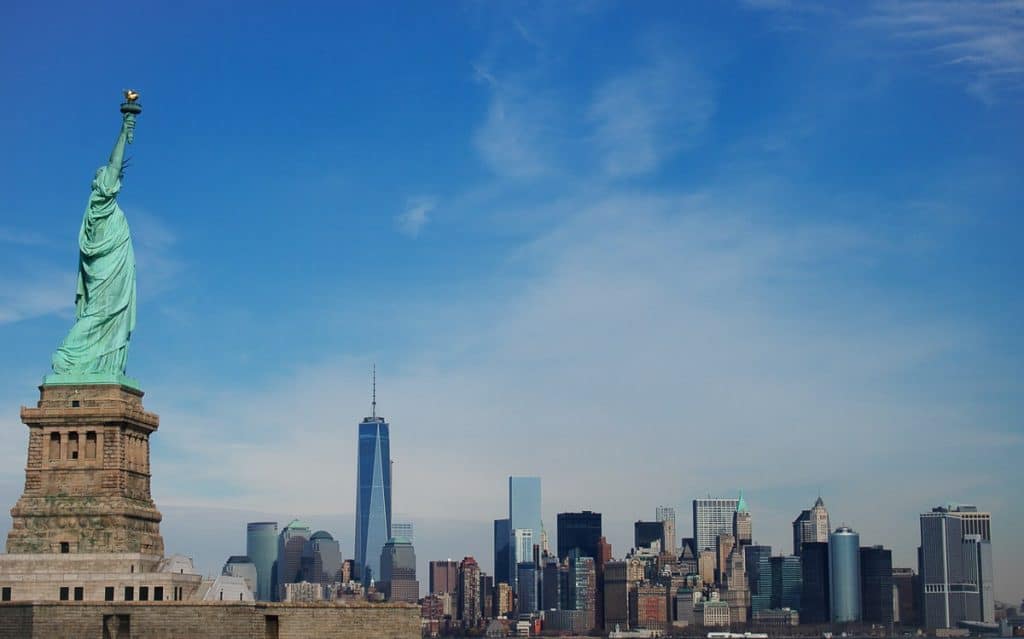 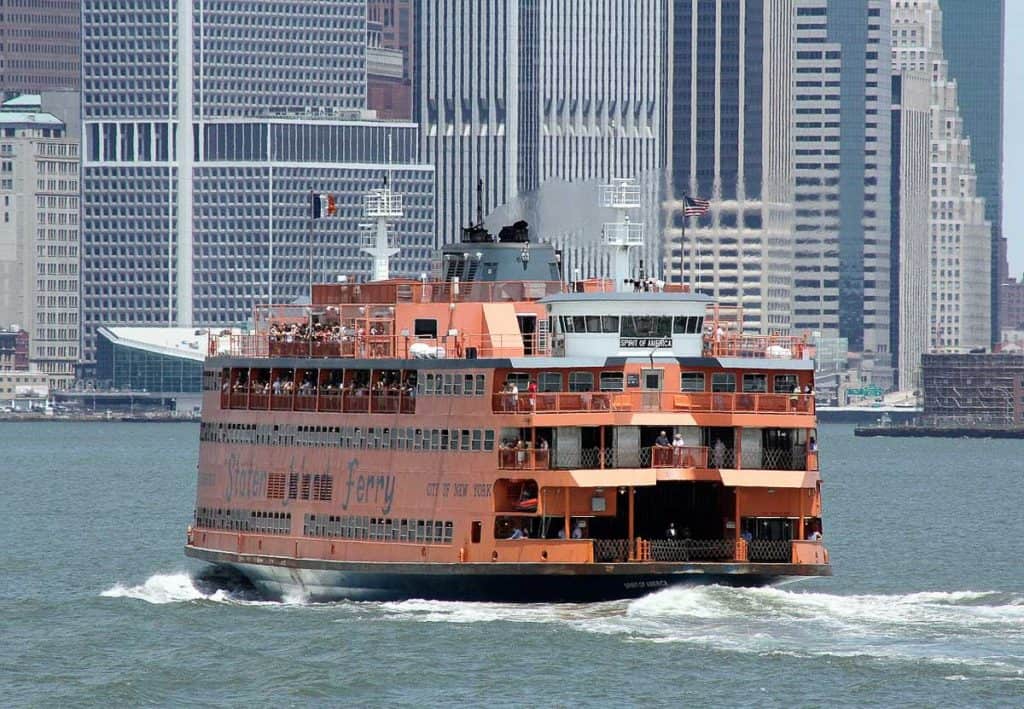 The High Line – Once a train track, it’s now been converted to a walkway complete with gardens, food stalls, and public art.

Chinatown – Not ashamed to admit I went here because there was a heat wave when I went to New York and I was craving bubble tea and hadn’t had it since I left Australia!

Little Italy – Another part of New York that gets its name from the immigrant population.

Flatiron Building – The triangular skyscraper is of the most photographed buildings in New York.

Greenwich Village – The treelined streets are full of great cafes and Washington Square Park is a lovely spot to have a rest. It was once the epicentre of the 1960s counterculture movement and is known to be very LGBT friendly.

Chelsea Market – A food hall and shopping mall that is the filming location for many cooking TV shows.

Whitney Museum of American Art – Another outpost for The Met. 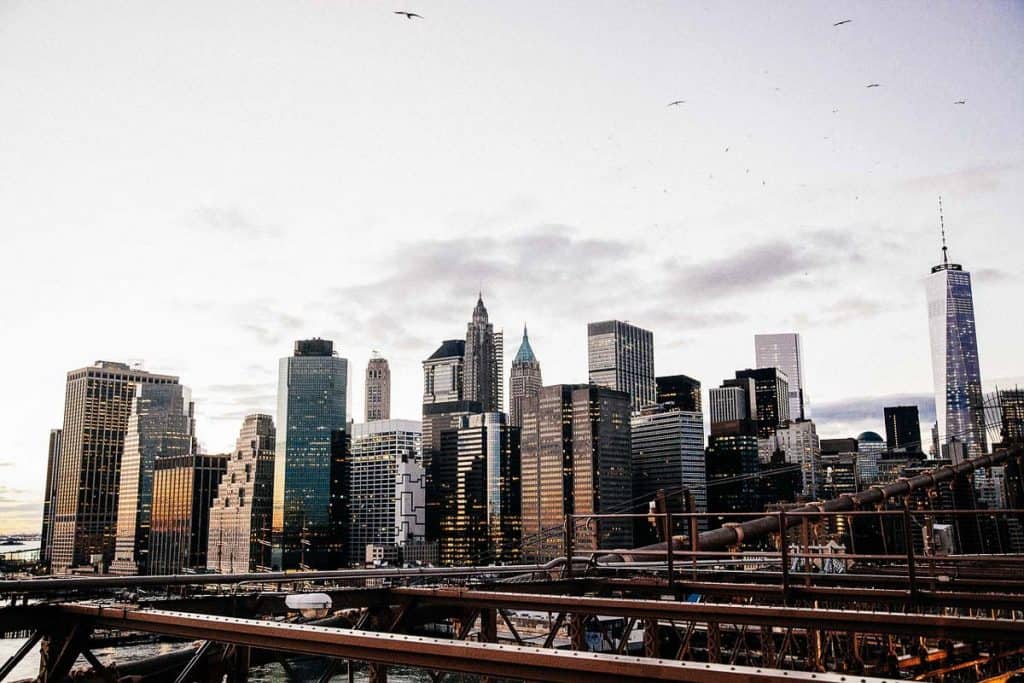 The cheapest time to visit New York is from mid-January (after the holiday season) and February, however, the weather will also be cold. The warmest weather (some would say too warm!) is in June, July, and August but it’s also very busy. March to May means warmer temperatures but there can also be rain so pack accordingly. September to November are seen as ideal temperature wise and the city in the changing season is beautiful, however it will be extremely busy over Thanksgiving thanks to the Macy’s Parade.

Getting around New York City

Honestly, I walked most of this itinerary in the four days I was in New York! At times I took the subway, but much of it is more walkable than you think. Taking public transpiration like the subway is great if you don’t want to walk, however! And of course, you can take one of the many yellow cabs but consider the time of day for traffic.

Getting to New York City & Where to Stay

There’s no denying that New York is a more expensive destination, but there are ways to take a trip to New York on a budget or make it a cheap weekend getaway. How you get there obviously depends on where you’re coming from, so after figuring out where you’re most likely flying from, I’d say the thing that will affect your budget most is where you stay.

If you’re coming from abroad, then you could consider a New York holiday deal package that includes flights and accommodation. If you’re booking your own, remember you don’t have to stay in Manhattan and you can look at places like Brooklyn and Queens where you can easily get into the city. As well as hotels in New York, you can look at Airbnb and other apartment options which will also save you money on eating out all the time, if your NYC trip is on a budget! However, if you want to splash out and treat yourself then there are plenty of amazing luxury hotels in Manhattan too!

Check out hotels in New York

What to pack for New York

Since you have limited time it’s a good idea to pre-book some tours and tickets. Check out Get Your Guide for tickets to all the major attractions, many of which have skip the line options!

Get Your Guide Ticket Options

Powered by GetYourGuide. Become a partner.

So there you have it, plenty of things to keep you entertained on a four-day trip to New York City. Is it on your bucket list? 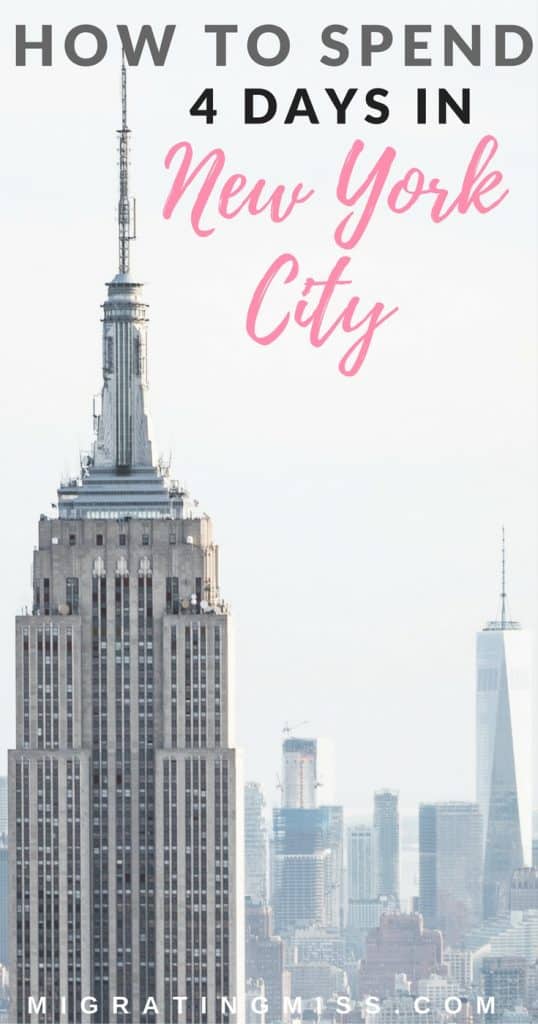 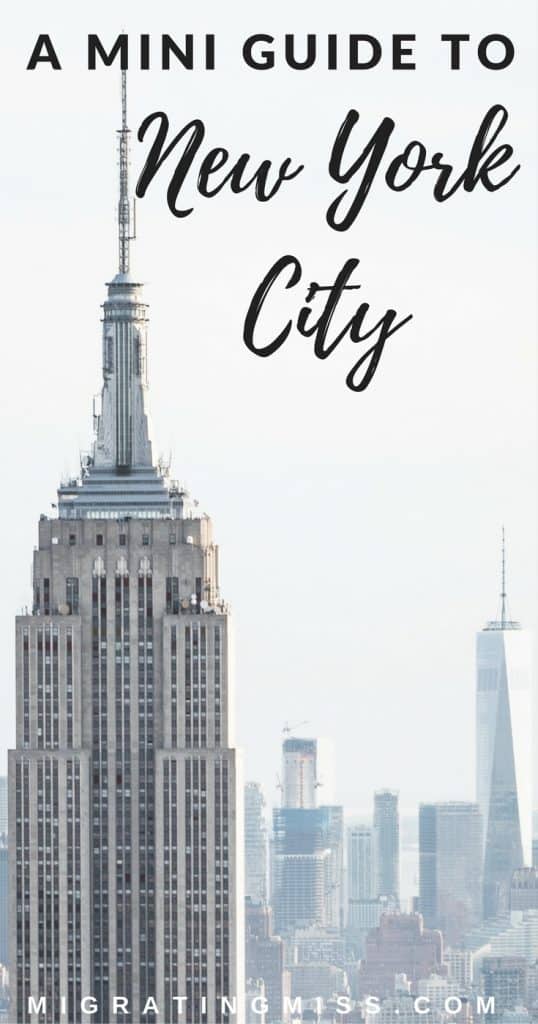 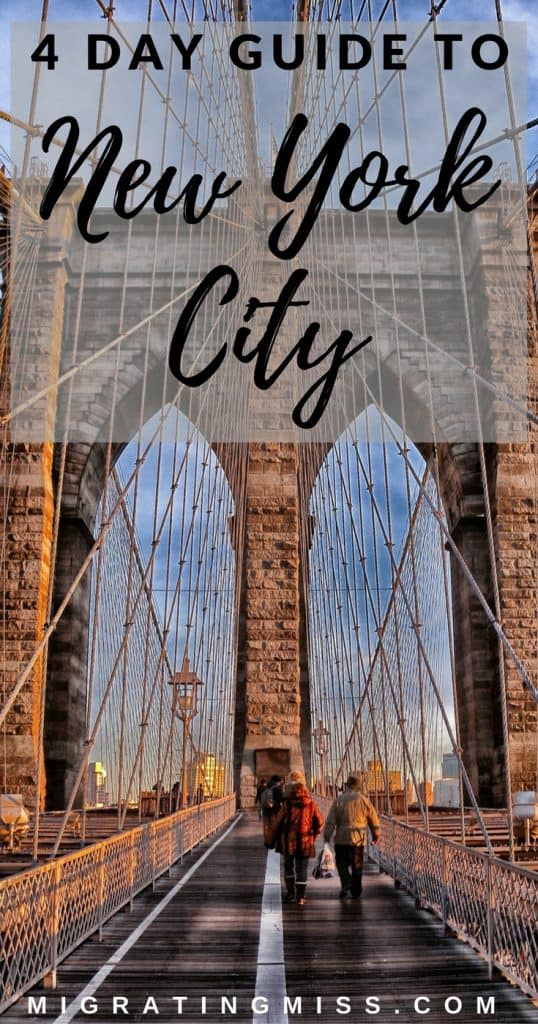