Seattle is a huge city with so many great attractions that it really does deserve more than one day. But if one day in Seattle is all you have for whatever reason, then you have the make the most of it! You can only skim the surface of this captivating city, so don’t try to cram too much in, but do plan wisely so that you can cover as much ground as possible.

Plan your Seattle itinerary in advance and pick out the highlights of any museums you’d like to visit. Pick one or two of the best things to do in Seattle in a day from the below and check opening hours so that you don’t miss out. Check out the map at the end of the post to keep you on the right track and help you to make the most of your day in Seattle!

One of the best things about Seattle is that there are lots of free things to see. You could easily wander around and stick to a pretty tight budget. However, there are definitely one or two things that are worth spending your money on, and if you only have one day in Seattle then you should make it the best it can be. 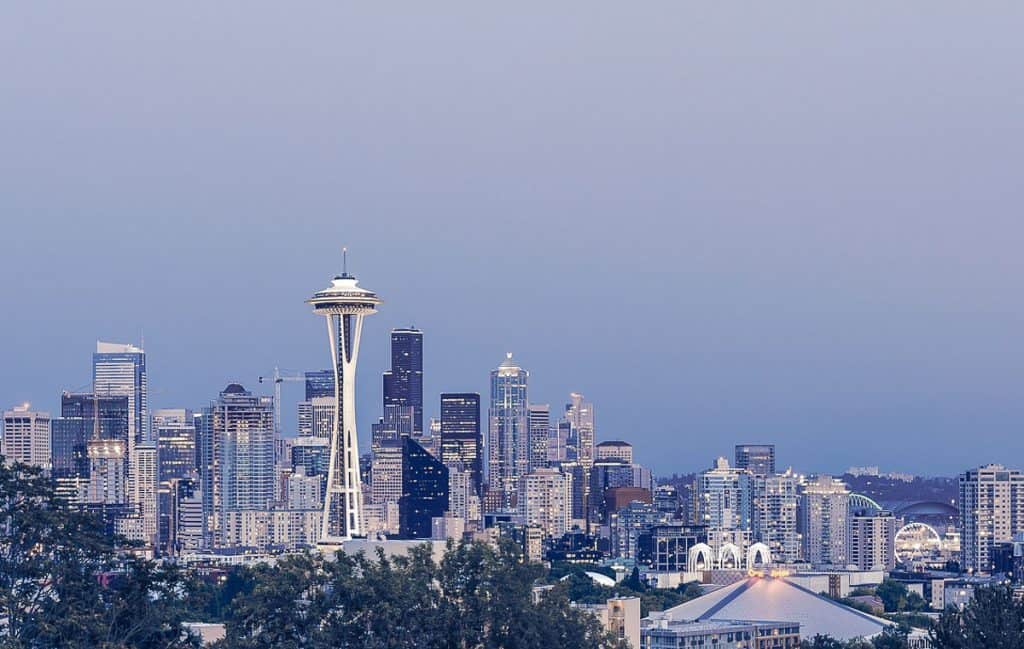 Here’s a list of the main attractions so that you can choose exactly what you’d like to do and start to piece together your Seattle one day itinerary.

It’s open early, so hit the ground running and explore of Seattle’s biggest attractions before the crowds. The first Starbucks ever was opened here, so you can grab a cup of coffee if that’s your thing, or check out the produce, flower vendors, and bakeries. Arts and crafts stalls open by mid-morning so if you’re still around you can shop for unique gifts or find the specialty shops in the depths of the market.

If you’re not just taking a day trip to Seattle, then you can also visit at night after many of the stalls are closed and some of Seattle’s best restaurants are open for business. 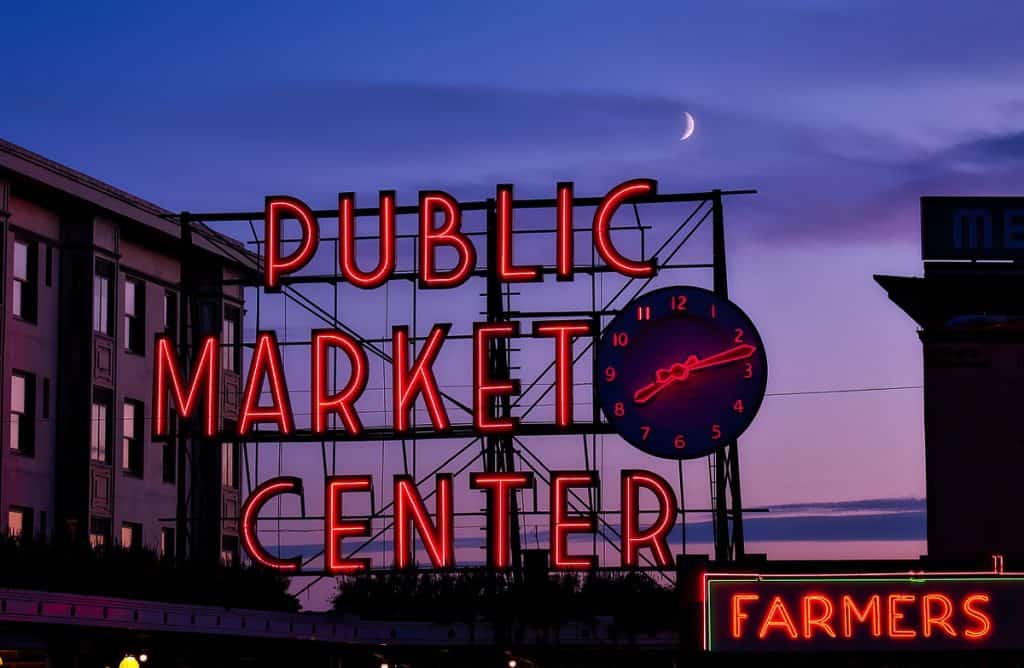 Ask anyone to name a building in Seattle, and it would surely be the Space Needle. It would be almost criminal to come to Seattle and not see it, so much sure you fit it into your one-day itinerary. The Space Needle was built in 1962 for the World’s Fair, and it was supposed to represent how the space age would be in the 21st century. We may not quite have got there, but we do have this 605 ft tall tower that gives us amazing 360-degree views around Seattle and beyond.

If you want to ride to the top, it’s best to check in advance that the Observation Deck will be open on the day you visit – an extensive renovation program is underway and there is the possibility of closures. Check here for prices and times.

Budget tip: If you’re counting the pennies/cents or have a phobia of heights, you’ll still find a walk around the outside fascinating. You can also get great views from Kerry Park and the Seattle Great Wheel. 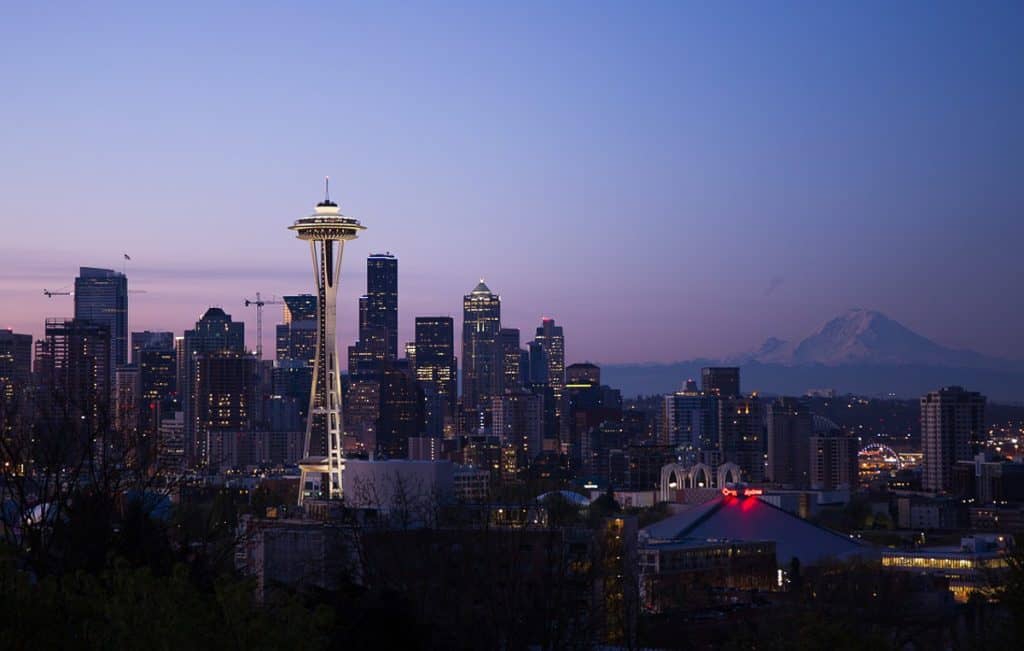 Take a stroll along the Waterfront, where you can stop for lunch (locally caught seafood is recommended), go souvenir shopping, or simply watch the world go by as part of your day in Seattle. It can be a bit touristy and overdone, but the view across to the Olympic Mountains on a clear day is stunning. Make a stop at the Olympic Sculpture Park, or take a ride on the Great Wheel. It might not go as high as the Space Needle, but you’ll still get some amazing views of the city and beyond.

If you have the time while you’re in the area, catch a water taxi for a quick ride that will give you another angle to view Seattle from. You might even spot some dolphins, so keep your eyes peeled! 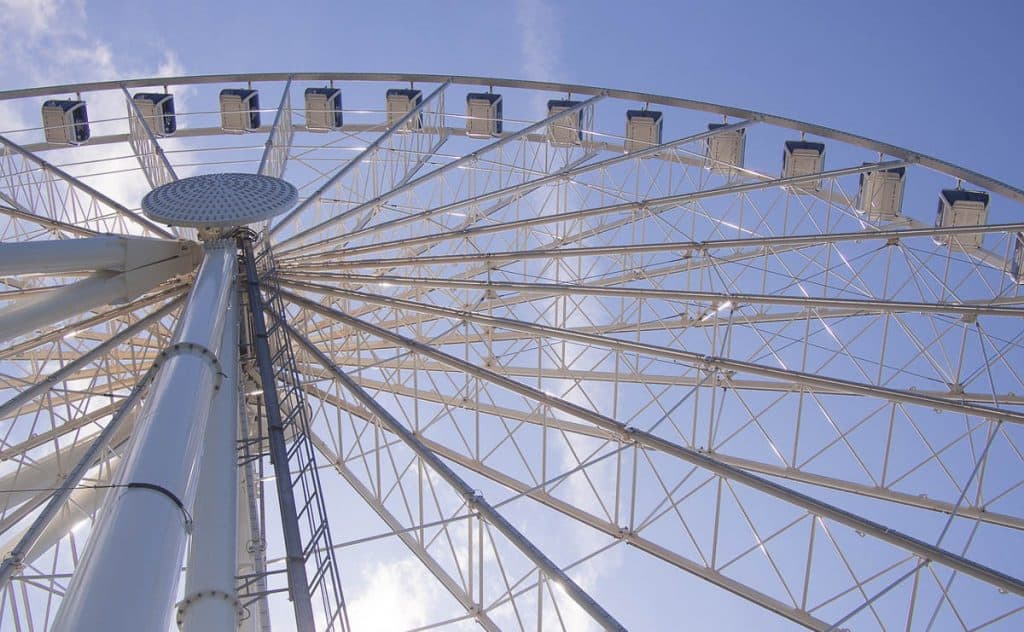 Art is everywhere in Seattle, and much of it is free in the form of public sculptures. If you’re a culture buff and wondering what to do in Seattle, you should definitely try to catch one of the major galleries such as the Seattle Art Museum. Some museums and galleries offer free entrance once a month, usually on the first Thursday of the month. However, many of Seattle’s cultural attractions are world-renowned, so it’s well worth paying if you’re here outside the free days. 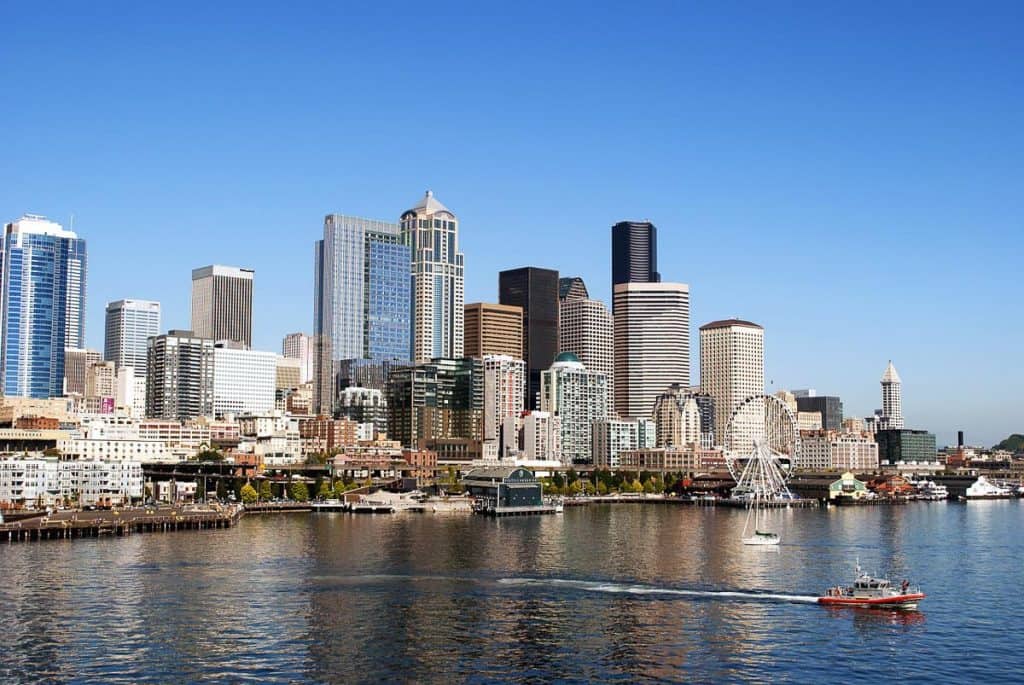 This is hands down the best museum I have ever been to and I would highly recommend it on the list of things not to miss in Seattle. When I went it was called the Experience Music Project Museum, but it’s now the Museum of Pop Culture. I saw exhibitions that delved deeply into Seattle’s musical past and present with exhibits about Nirvana, Jimi Hendrix, and Pearl Jam, and I loved it! It’s now expanded to include other areas of contemporary pop culture. It wasn’t cheap, but I would 100% go back there again. And I never say that about museums… 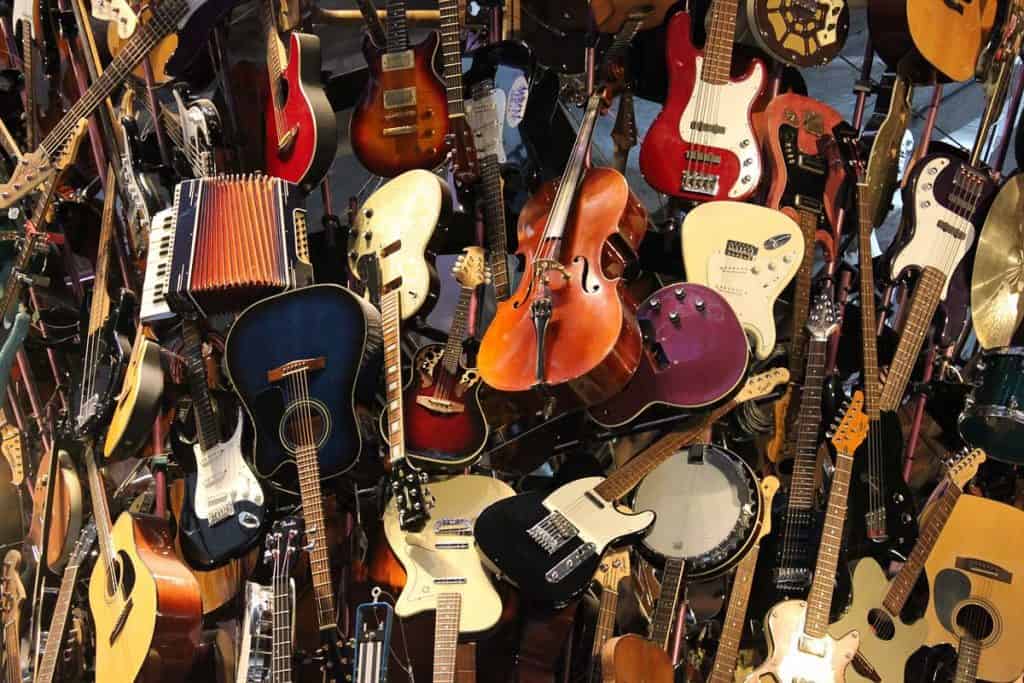 You don’t have to be a bookworm to take a quiet stroll around the central branch of the Public Library. This 2004 building is a world away from the stuffy old libraries of the past, with an unusual layout that flows from floor to floor and covered in more class than five football stadiums. There’s plenty of free events, so check out the schedule to see what’s on offer.

My brother and my Dad went here and they really enjoyed it. The Museum of Flight in Seattle has one of the largest collections of air and spacecraft in the USA. It’s a 15-acre space that includes the original Boeing Aircraft Factory and a NASA Space Shuttle Trainer! 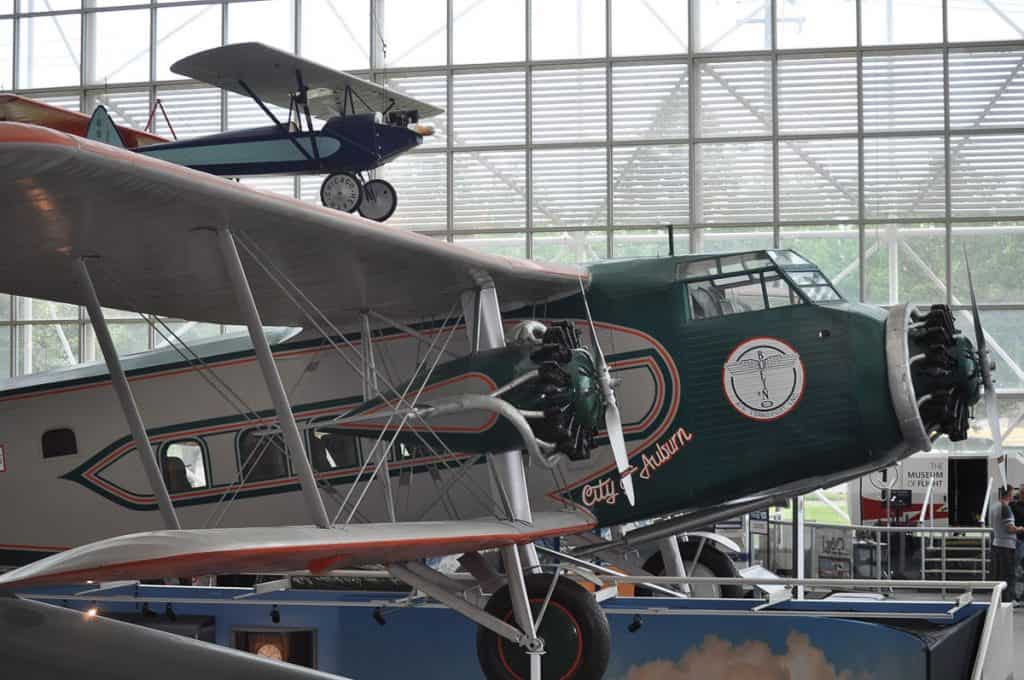 Visit one of Seattle’s stranger attractions

There are some rather, uh, different sights in the city and it would be nice to try and fit at least one into your one day in Seattle. Take some selfies with the Fremont Street Troll under the Aurora Bridge, or for really gross, there’s always the Seattle Gum Wall (yes, really). 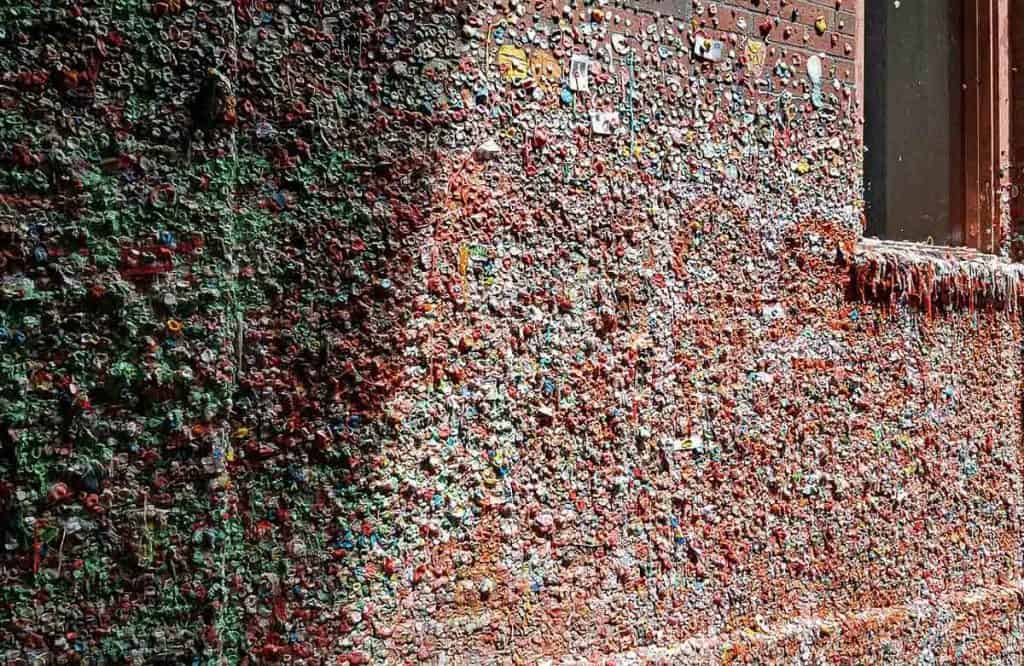 You can also take an Underground Tour of Seattle, which takes you through the footpaths and storefronts that were built over when the city was rebuilt after the Great Fire in 1889.

All of that should keep you pretty busy for your one day in Seattle! If you have a longer stay then, of course, you can fit in a lot more, and take your time to see all of this. At least you know what not to miss! And all I know is if I ever get the chance to visit Seattle again I’ll jump at it!

Seattle map of attractions for one day

What to know before you go

Seattle is located in the northwest of the USA. It’s actually a great detour if you’re visiting Vancouver as well! We caught the ferry from Vancouver Island to nearby Port Angeles (of Twilight fame) and then drove to Seattle, before returning to Vancouver by bus. There’s plenty of things to do in Vancouver so you could plan a trip to both cities at the same time! Just remember if you’re heading to the Seattle from outside the USA (and you’re not American), and you haven’t been in awhile you might have to complete an ESTA application to get a visa that will then be valid for two years. 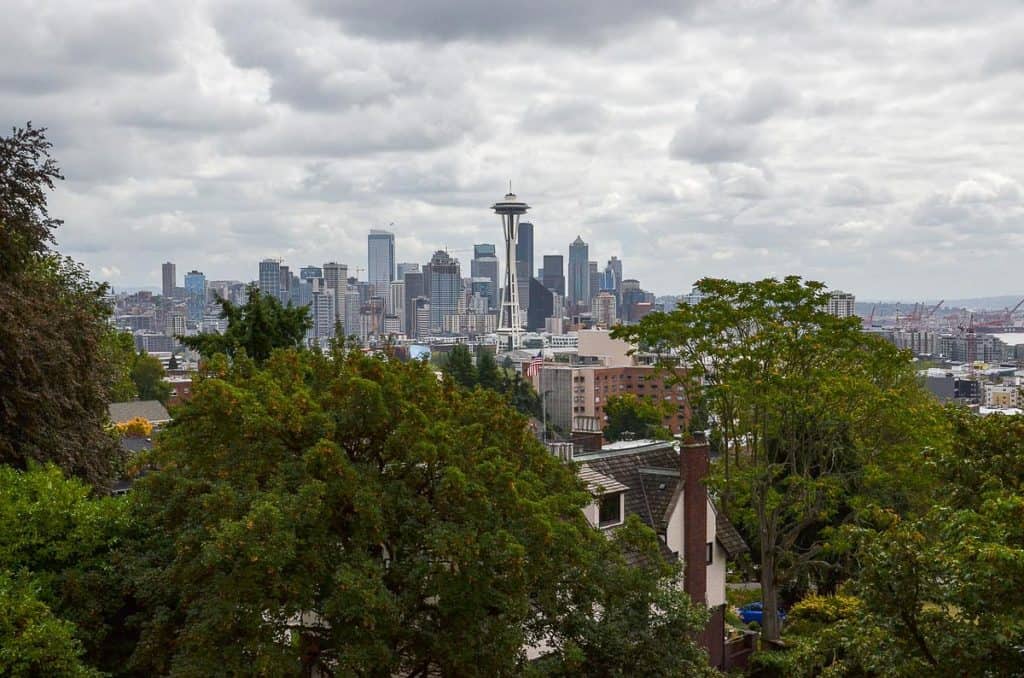 If you’re looking to explore other areas around Seattle, then I’d recommend a trip to Vancouver Island, also part of Canada, and reachable by a direct ferry, or head south down the Pacific Northwest of the USA, an area renowned for its ruggedly beautiful beaches and delicious food.

So, are you going to go and discover Seattle for yourself? 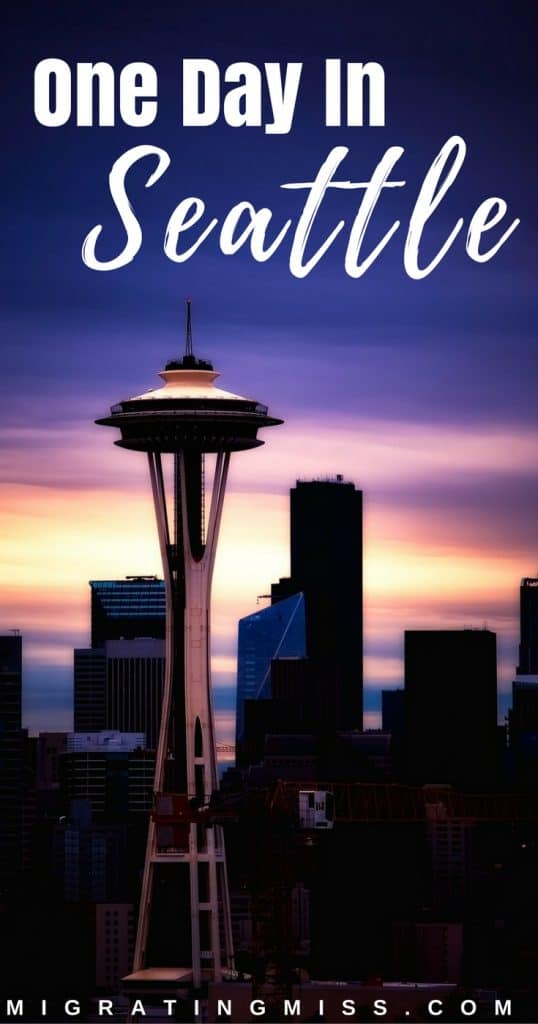 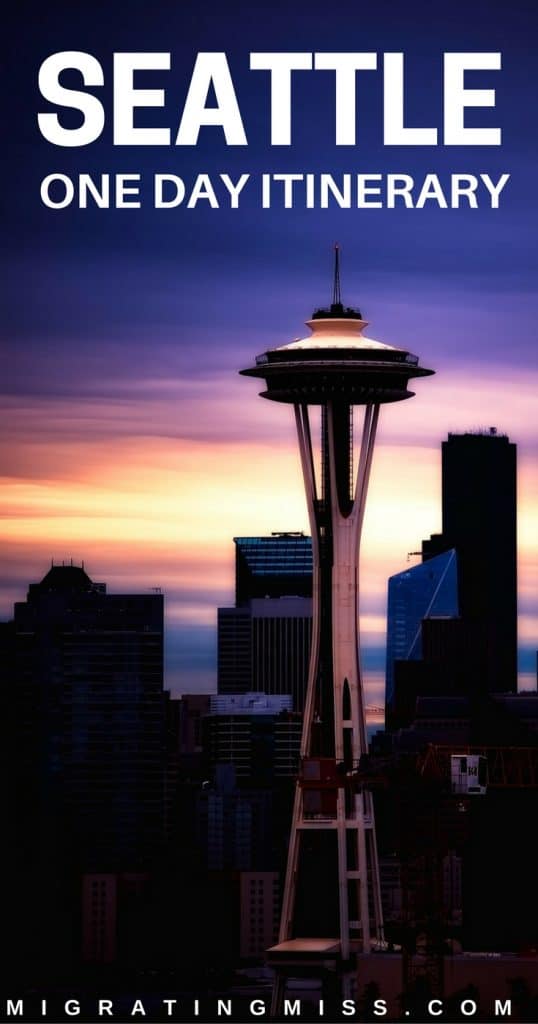 4 thoughts on “One Day in Seattle: City Guide + Map for the Perfect Day”