Last week I wrote about whether I might have made a mistake in moving to Spain to live.

How things can change.

Speak to anyone who’s moved abroad and they’ll tell you about the rollercoaster of emotions, and how they’re emotions in extreme. Living abroad means dealing with the highs and the lows, and not much in between to begin with. One moment you’re thinking moving overseas is the best thing ever, the next a teeny thing doesn’t quite work and you’re down in the dumps.

Spain might be the 5th country I’ve moved to, but it doesn’t mean it’s been any different. If anything, I’ve found moving to Spain more difficult since I haven’t moved to a country that didn’t speak English before, I’d forgotten about the aforementioned rollercoaster, and I’m only here for a limited time. All this means I’ve been putting pressure on myself to be settled and living the life I want here quickly. Putting pressure on yourself when you move abroad should be number one on the what not to do list!

So what’s happening now with my life abroad in Spain?

In the first few days I compiled a mental list of all the things I wanted to do to get settled in to living in Spain, and I felt like it just wasn’t happening fast enough. Patience may not be a strong point of mine, although I honestly have never noticed that so much before! Luckily a lot of things have now fallen into place.

I’ve rented an apartment in Spain

The best thing that’s happened and helped me to feel more settled living abroad in Spain is finding an apartment.

If you want to know, renting an apartment in Spain is pretty much the same as anywhere else. Rachel and I started by looking online for apartments in Almería, where you either need to navigate a Spanish housing site or use an English option, but beware of limited results if you do. The Auxiliar de Conversación program doesn’t provide accommodation, but the school can usually help or possibly recommend something if you’re interested.

If you want to rent an apartment in Spain and don’t speak Spanish there are letting agencies where someone may speak you’re own language, or you could take someone along to translate. Without Rachel there would have been a lot more hand waving and Google Translate! We had to pay an agents fee in the end, but did manage to do some negotiation on the rent so don’t be afraid to try that if you’re looking for an apartment in Spain!

I think finding a place and setting it up when you move somewhere is really important, BUT my biggest piece of advice is to ensure you have a steady income before signing up for anything. This was a huge mistake I made when I first moved to the UK and meant I lost a lot of savings on rent before I had a job. After you do find a place to live though don’t be afraid to splash out a tiny bit to make it feel like home. At the end of the day it’s where you’ll spend a lot of time, and it can be your sanctuary when you’re in the dip of the rollercoaster!

I found a favourite cafe

I love cafes. A lot. I don’t even know how to write how much I LOVE cafes. I especially love finding a cafe I feel at home in, where I enjoy the food and drink and can spend time there on my laptop, reading, or just hanging out. Anyone who knows me well knows one of my favourite things to do is find a great cafe to spend my time (and money!) in.

In Spain the cafes are really different and not usually of the quirky sort of style I like, but I kept walking past this one place called Cryano on my way home everyday and thought it might fit the bill. While the kitchen opening times are totally out of whack with what I’m used to, they seem to have coffee, cake and beer all day, and I LOVE how it’s decorated inside. I’ve already decided Cyrano is the best cafe in Almería I think I’ll be spending a lot of my time in Almería in there…

There are boring but necessary things to be done when you move country, and you don’t fully live somewhere until you have a bank account! Most banks in Spain want you to have your NIE number before they’ll give you an account (a whole other story to tell), but BBVA let me sign up with just my passport and employment letter. Win!

It’s really important to me to try and learn Spanish as much and as fast as possible. After the first few days of feeling like I couldn’t communicate or do much at all I was more determined than ever, so I found myself a Spanish tutor. I’ve spent a fair amount of time in the past teaching myself, but it’s resulted in me recognising things when I hear them and knowing a lot of individual words, without being able to speak Spanish or string together a sentence. Not ideal.

My tutor is starting me on the super basics and I find myself a little frustrated when sometimes I can’t even remember those, but I know I need to learn to walk before I can run so to speak. Plus, I need to get my head around the idea that now I’m finally committing to learning a language is going to be a lifelong process, not an overnight one.

So, this week’s post is a little more on the personal journal side of things rather than being terribly informative about what it’s like living abroad in Spain for everyone! I’d like to share the mundane settling in stuff too though, since sometimes that’s what living abroad is about. I also want you to share with me!

Have you ever lived abroad? How did you find settling in? Were you super impatient like me…

This post is part of a weekly series on living abroad in Spain. Check out other posts like How I Moved to Spain to Teach English and Did I Make a Mistake Moving to Spain? 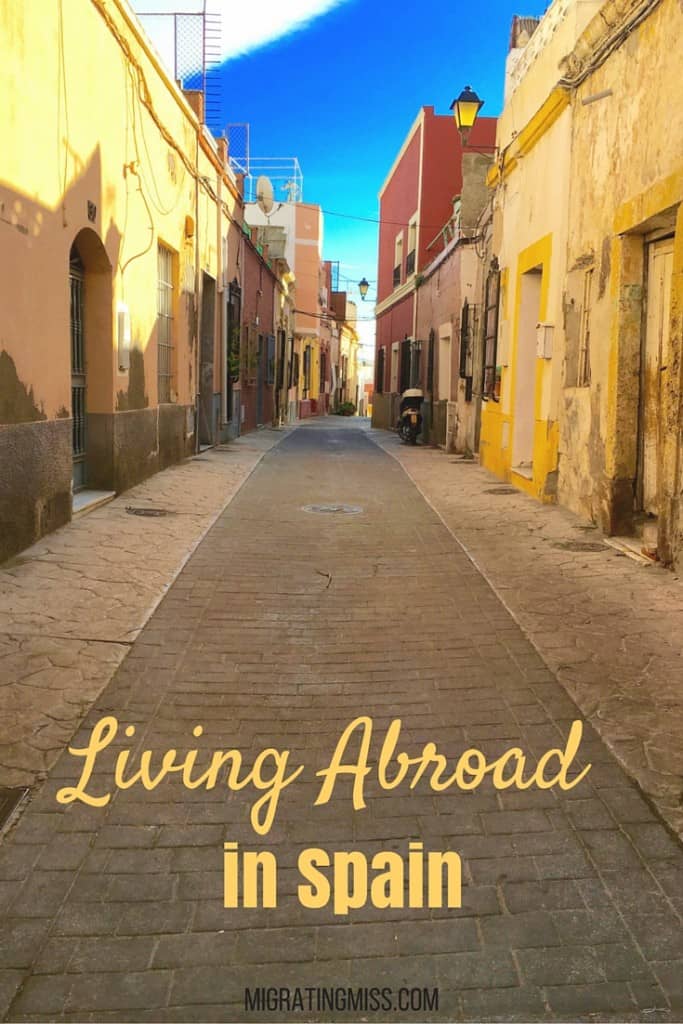 8 thoughts on “Settling in to Living Abroad in Spain”