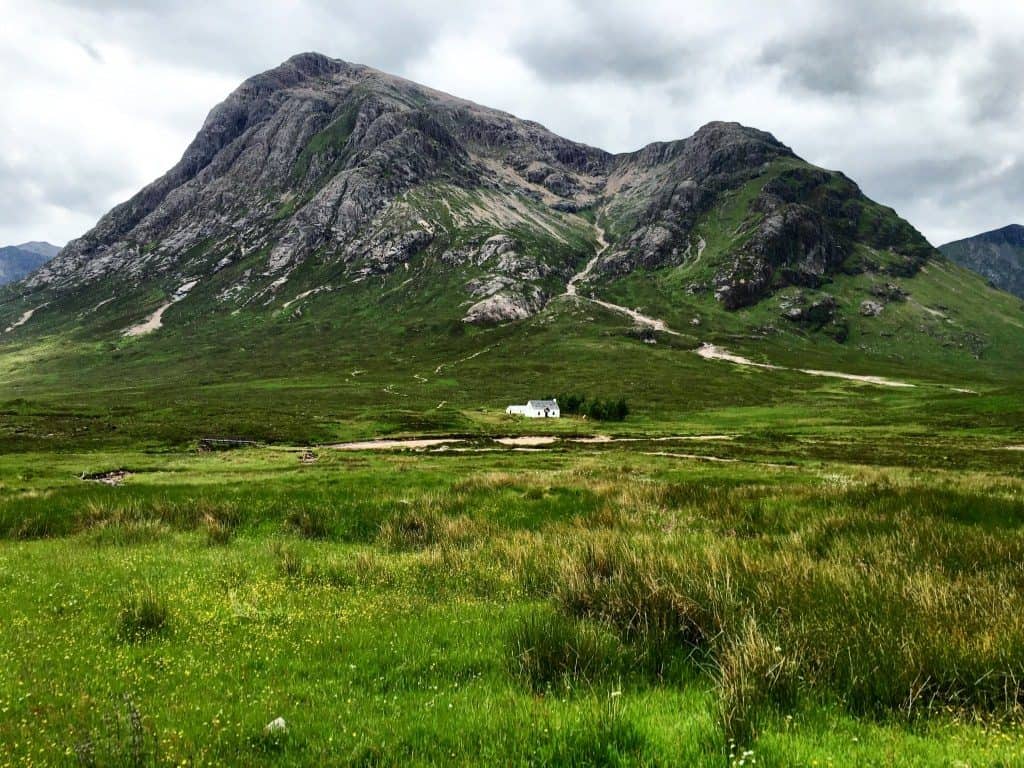 There’s some places that you can’t help but return to over and over again. You never tire of visiting and they seem to constantly feature in future travel plans.

Glen Coe is one of those places.

What is Glen Coe?

The Scottish Highlands are home to more stunning lochs and glens that I could possibly hope to visit, but this one is just something else. Glen Coe is a place of stunning beauty, no matter the season. Visit in summer for lush green mountains, and in winter for a more barren and grim magnificence. Glen Coe is the remains of an ancient super volcano, and the landscape speaks to it. There are several distinct mountains in Glen Coe, including Buachaille Etive Mòr in the south, literally the herdsman for directing travellers into Glen Coe, and the Three Sisters, three steep peaks that stun viewers as they drive along the road on the opposite side of the valley. Glencoe refers to the nearby village, whereas Glen Coe is the gorgeous glen itself.

The history of Glen Coe

Given that Glen Coe is a major artery in the heart of Scotland millions of people would have passed through there throughout time. If the landscape of Glen Coe could speak, it would have many stories to tell.

The first figure associated with Glen Coe is the legendary (possibly fictional) Fingal, a Celtic hero who is credited with the final defeat of the Vikings.

Probably the most well known is the story of the Glencoe Massacre. Tensions between the Glencoe MacDonalds and the Argyll Campbells had been brewing for almost 200 years before the tragedy on 13 February 1692.

The King had offered a pardon to the Highlands Clans who had been rising against him, and each other, if they took an oath of allegiance before 1st January 1692. Maclain of Glencoe, the chief of the MacDonalds, went to take the vow but went to the wrong place, and was delayed until the 6th of January. The clan thought they were okay, but trouble was coming.

On the 1st February a group of 130 soldiers led by Captain Robert Campbell of Glen Lyon travelled to Glen Coe, some say under the Kings orders, and asked for shelter with the MacDonalds. In Highland fashion they couldn’t refuse and entertained the party for 10 days. Then at 5am on the 13th February the soldiers rose and massacred their hosts. Forty were killed, but many more were driven out into the frigid cold and snow, to die from exposure. The treachery after accepting hospitality from their hosts is why this act has been so condemned. A monument now stands in Glencoe village. 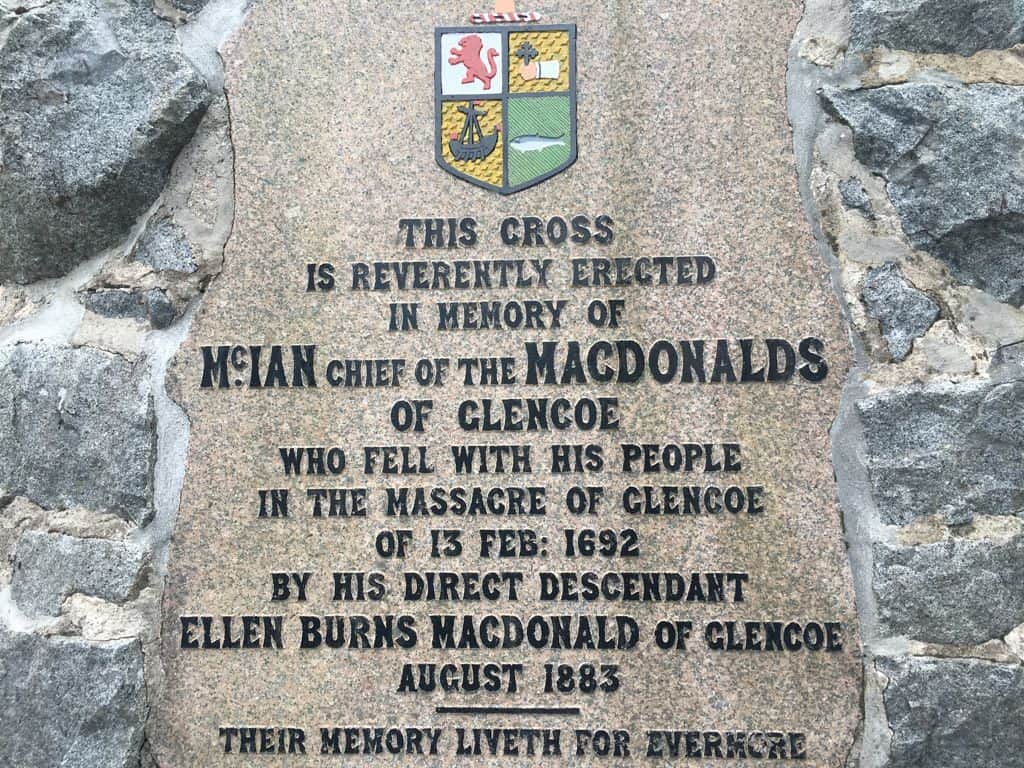 In 1785 the first road was built through Glen Coe. After the collapse of the Highland Clans after the Battle at Culloden, the ownership of Glen Coe passed through several hands before it became part of the National Trust for Scotland. Now we can all enjoy the drive or walk through Glen Coe.

My stories of Glen Coe

It’s just over three years since I first met the Three Sisters, and I always missed them on my first drive through Glen Coe! After a trip to the magical Isle of Skye for my birthday, it was a rather hungover drive back to Edinburgh. The clouds hugged the mountains closely, but we gazed in awe as we wound through the narrow glen. Unfortunately, we also had one eye on the petrol gage, somehow not having noticed how low it was before. Oops.

After holding our breathe all the way through Glen Coe (because we all know that helps with petrol consumption) we breathed a sigh of relief when we reached the next petrol station.

My first visit to Glen Coe reflected my life at the time. A girls weekend away cramming in the must see sights, a party and a hangover to match. 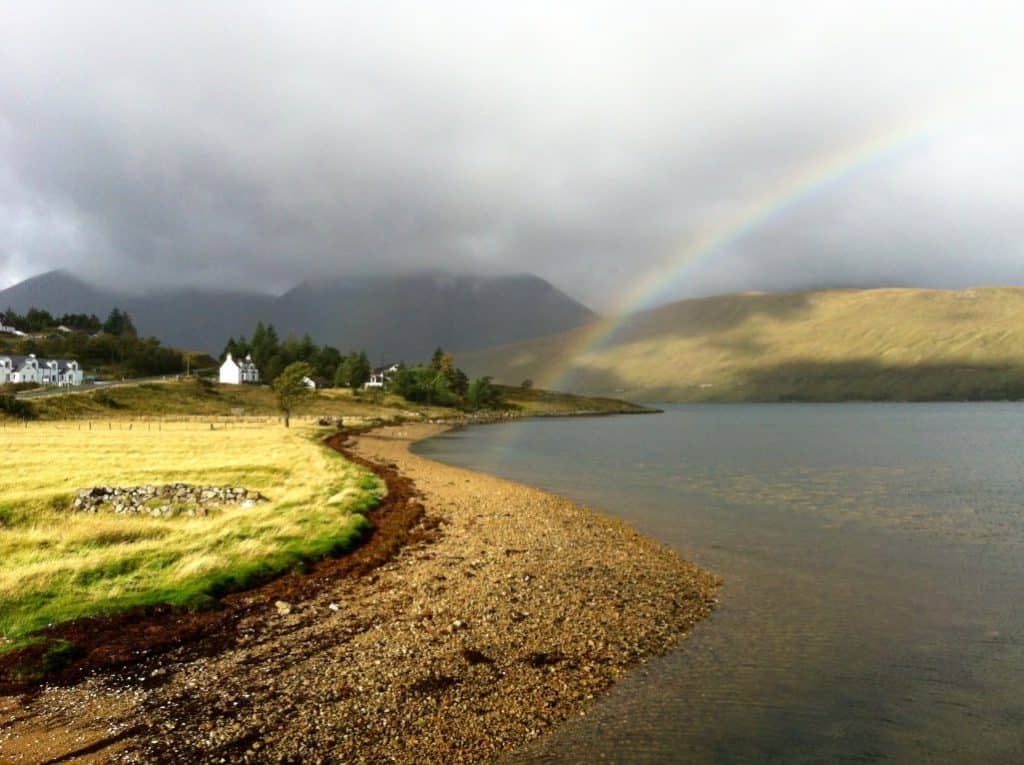 No pictures of Glen Coe the first time, but here’s our last glimpse of the Isle of Skye before we drove off!

When I first lived in Scotland, I lived here with a countdown. Two years on a working holiday visa in the UK was far too short, and when it ended I jumped ship to mainland Europe just long enough to convince them to let me back in again on a tourist visa. But the money didn’t last long and I had to move on to a new life instead of holding on to an old one. On my last weekend in Scotland I wanted to return to the place I could barely remember from a year and a half earlier, but I had read so much more about in the meantime.

We hired a car in Edinburgh and the Scotland road trip began. It was February, and 323 years to the day of the Glen Coe Massacre. Glen Coe was a barren brown where it peaked through the snow, and the air had an icy bite. I felt sad for the people who had perished hundreds of years before, happy to be seeing this place with it’s stark beauty, and devastated to be leaving Scotland. 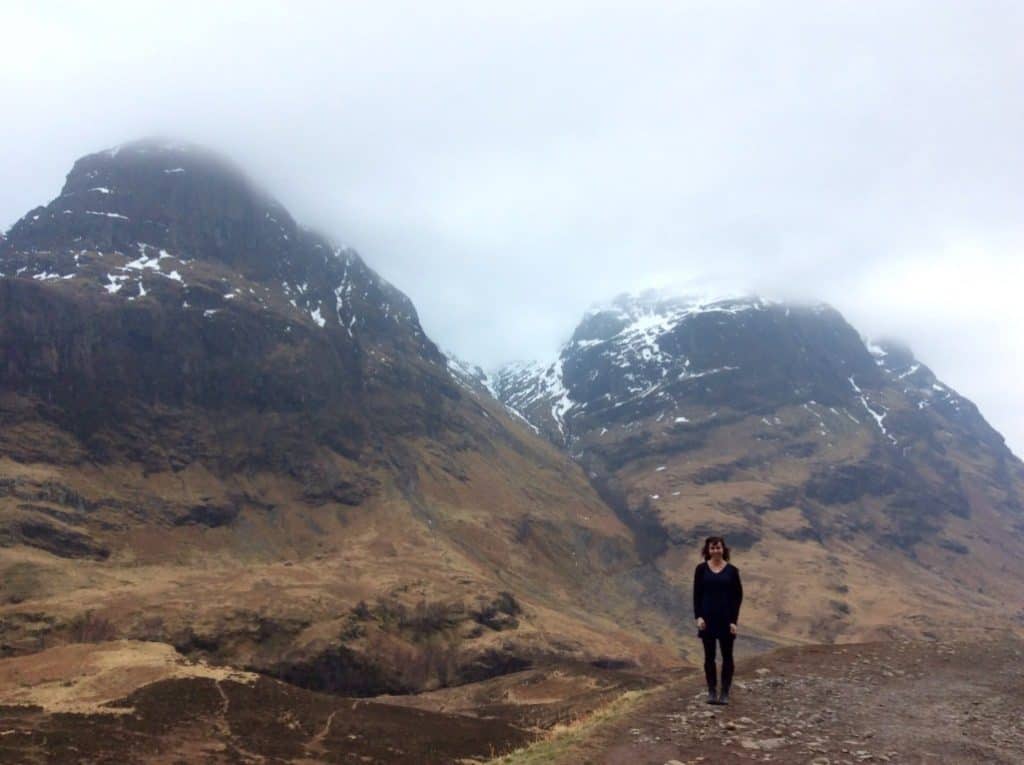 Return of the Kiwi

Ten months later and I had found a way to make it back from the other side of the world. In between I’d driven the width of Australia, dived to the depths of the sea on the Great Barrier Reef and made the decision to move to Spain and teach English.

To start 2016 off with a bang (And show an Aussie snow for the first time. Seriously, the number of Australians I’ve met who have never seen snow is HUGE. And weird) we got up early after Hogmanay (that’s New Year) for a drive through the Highlands. With lofty ambitions we travelled from Edinburgh to Glen Coe, stopped in Fort William for lunch, and then made the insane decision to try and get to Eilean Donan Castle with our limited daylight, before driving back to Edinburgh while it was actually snowing. Nothing like showing an Aussie snow for the first time then making him drive through it…

This time as we drove through Glen Coe I was insanely happy. It was cold but I didn’t feel it, as my joy at being back in Scotland warmed me from the inside. It was a rare clear day, with the cloud ceiling high above the mountains this time, presenting us with epic views as far as the eye could see. And it was just another beginning. 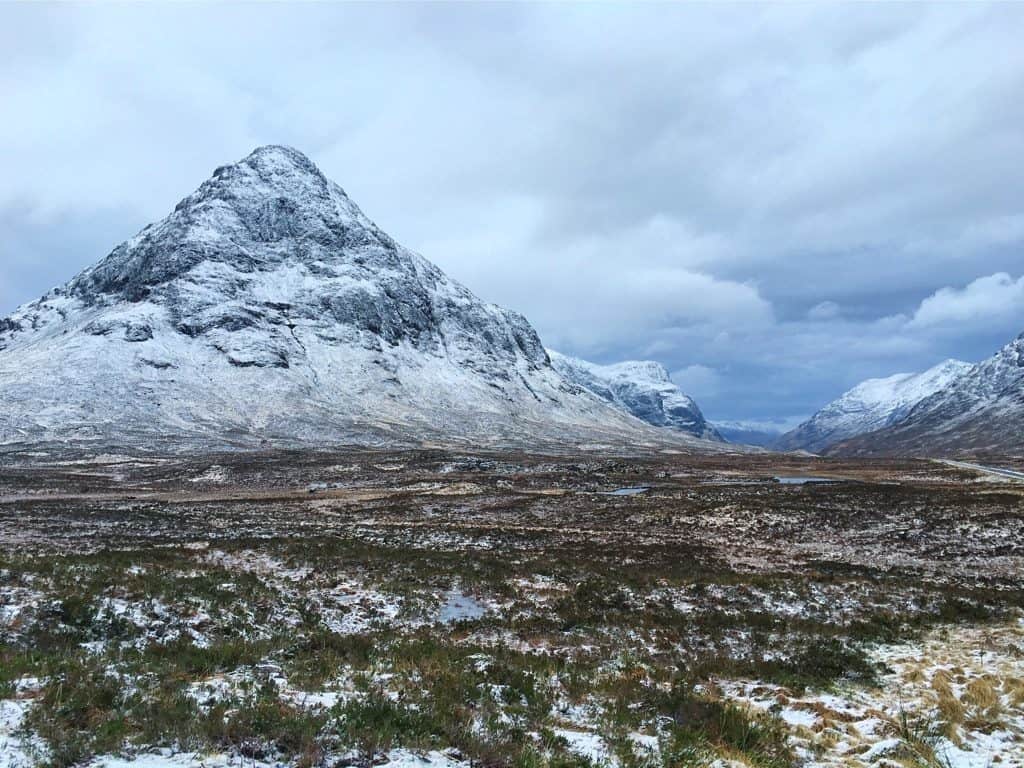 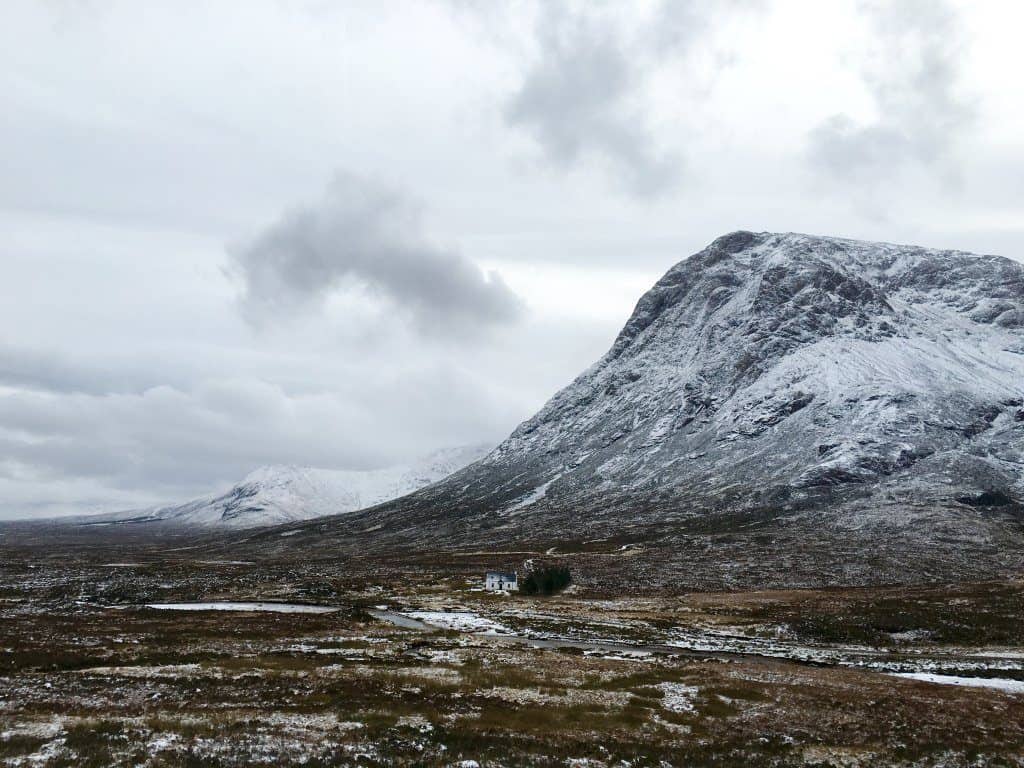 I’d always visited Glen Coe in the colder seasons, and as a travel blogger and avid Instagrammer I’d been bombarded with pictures of it coated in lavish green growth and purple heather. After five months of Spanish life I was back in my favourite place for the summer and I was determined to make it to Glen Coe to see her in all her summer glory.

Luckily my parents obliged and came to visit with their car, and I wrangled them into a day trip. The night before we had dinner with my boyfriend, and the day after the road trip him and I travelled to London for a weekend. Little did I know as we drove through the beautiful Scottish scenery, with the sun playing hide and seek with the clouds, that things were about to change, dramatically. But my Dad did.

Now when I remember and look at the photos of me that day, I see something different. It was the last day where I was with my parents in a way I had been since I was a child. Sitting in the back seat of the car as we drove off on a family adventure. A way that I won’t really be again. 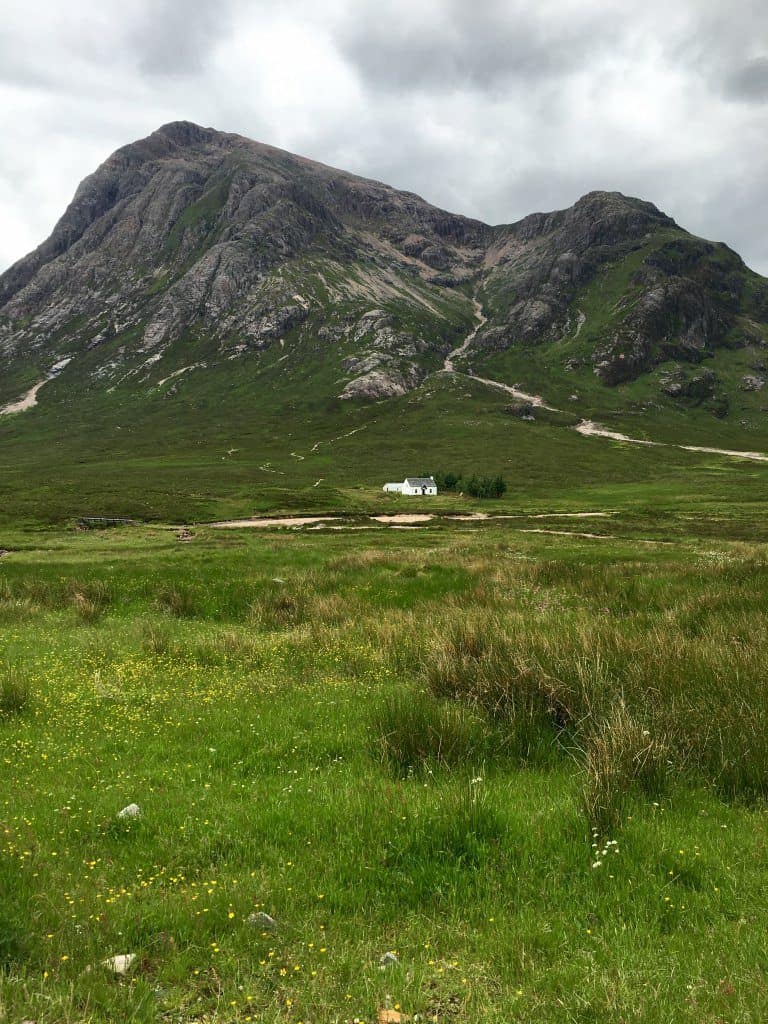 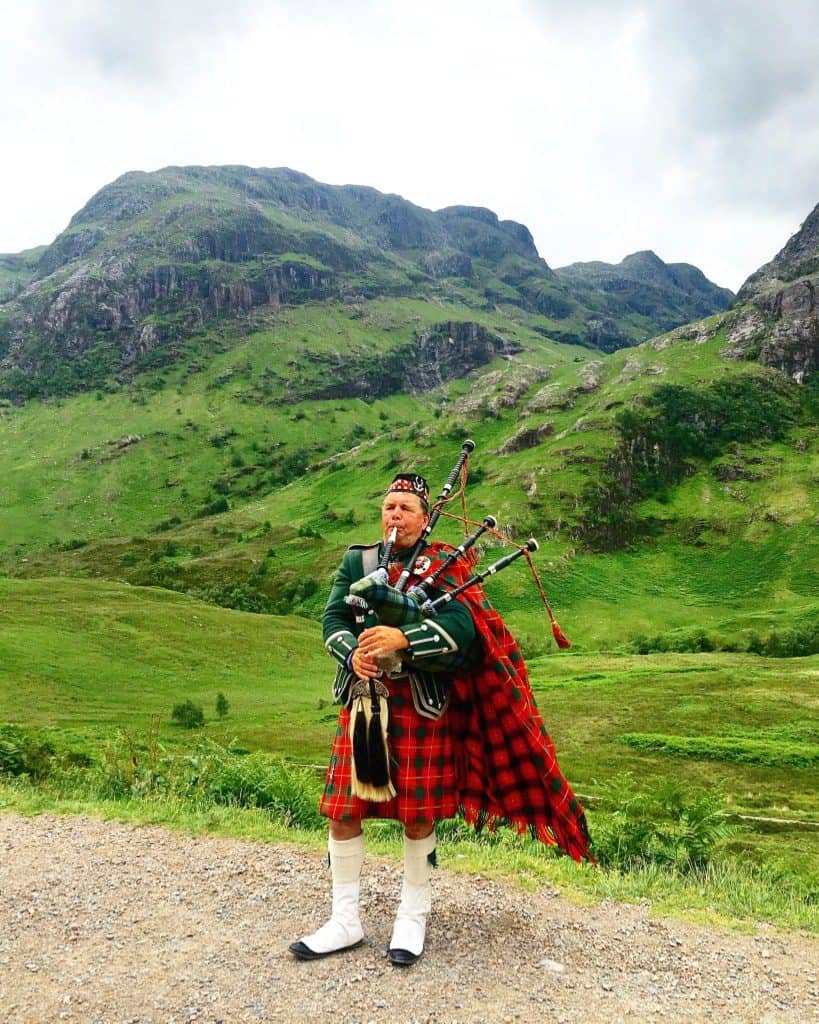 My most recent trip through Glen Coe was on a tour with Rabbies Trail Burners. For two days I travelled around the Highlands  to Inverness, and back down again via Loch Ness, on the 2 Day Loch Ness & Highlands Tour. Our wonderful guide told us stories of the highlands that I’ve never heard before. For the first time I saw the Glen Coe Visitors Centre, and was amazed again by a different view of the valley. Once again the clouds were low and Glen Coe was moody, but the heather was out and it was beautiful.  I felt like I could visit over and over and still find something new to see. And in that moment, I knew I would. 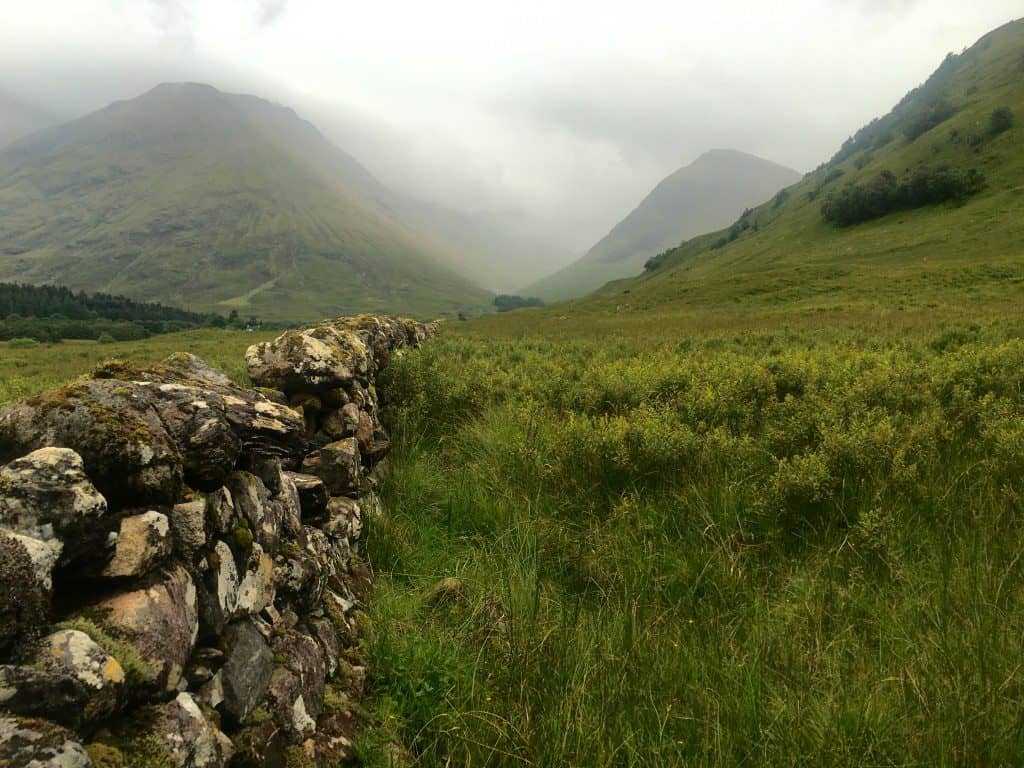 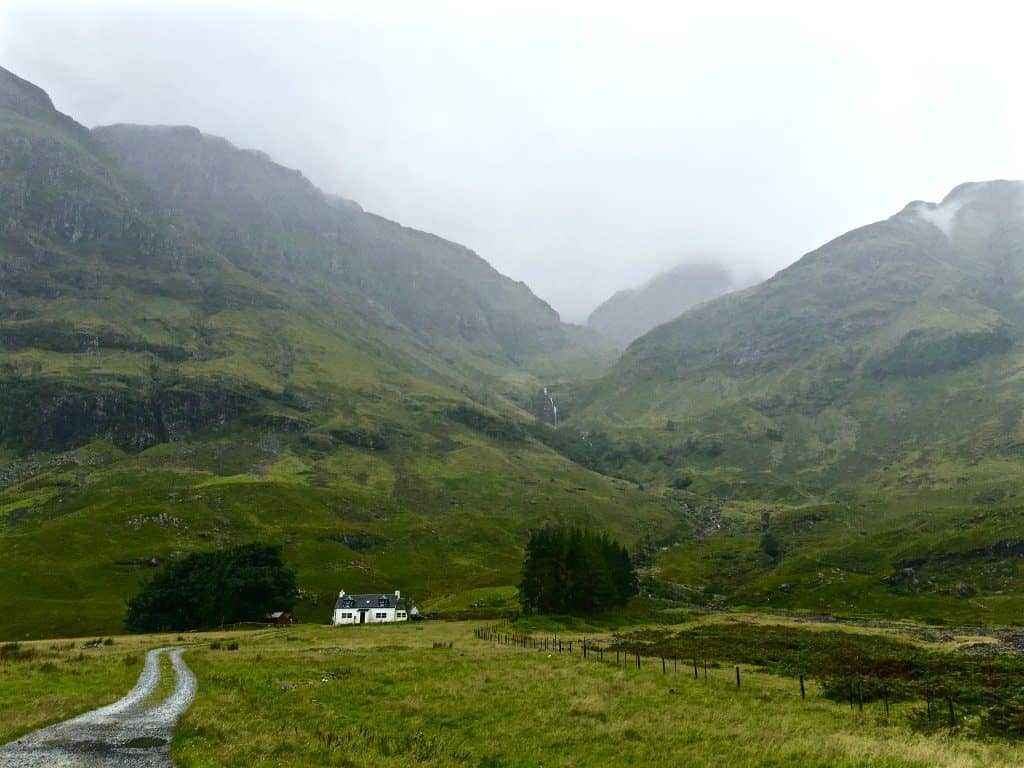 In the midst of a beautiful place, I’ve measured the changes in my life for the past three years, and I know I’ll return and do the same in years to come.

P.S. My tour with Rabbie’s was a collaboration in exchange for work, but all opinions are always my own. I also link to them as an affiliate so if you book a tour (highly recommended!) it helps me out at no extra cost 🙂 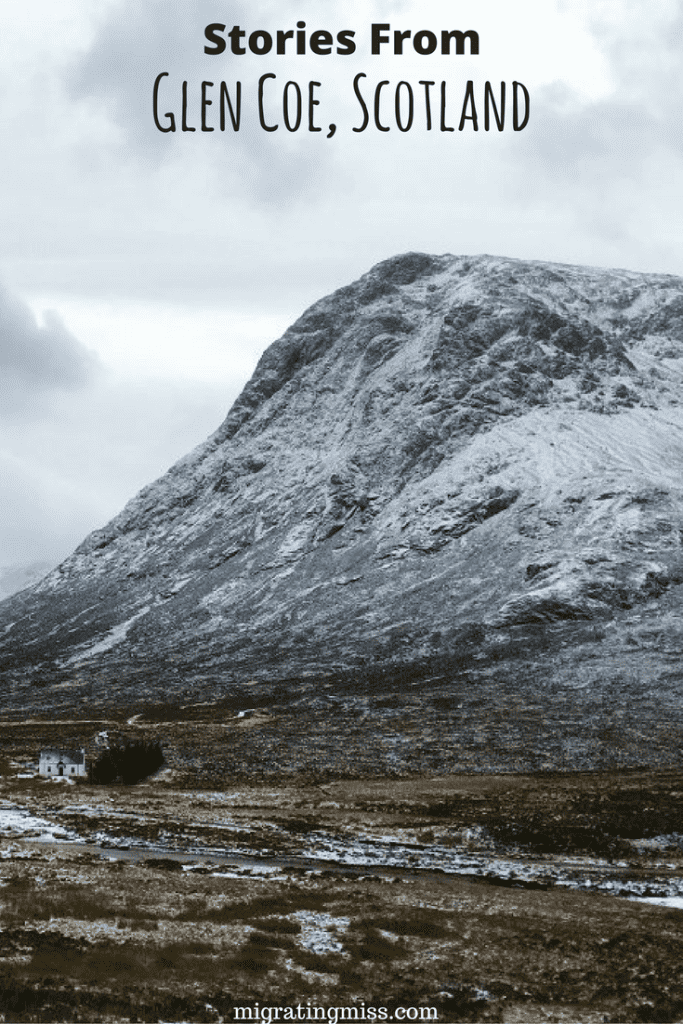 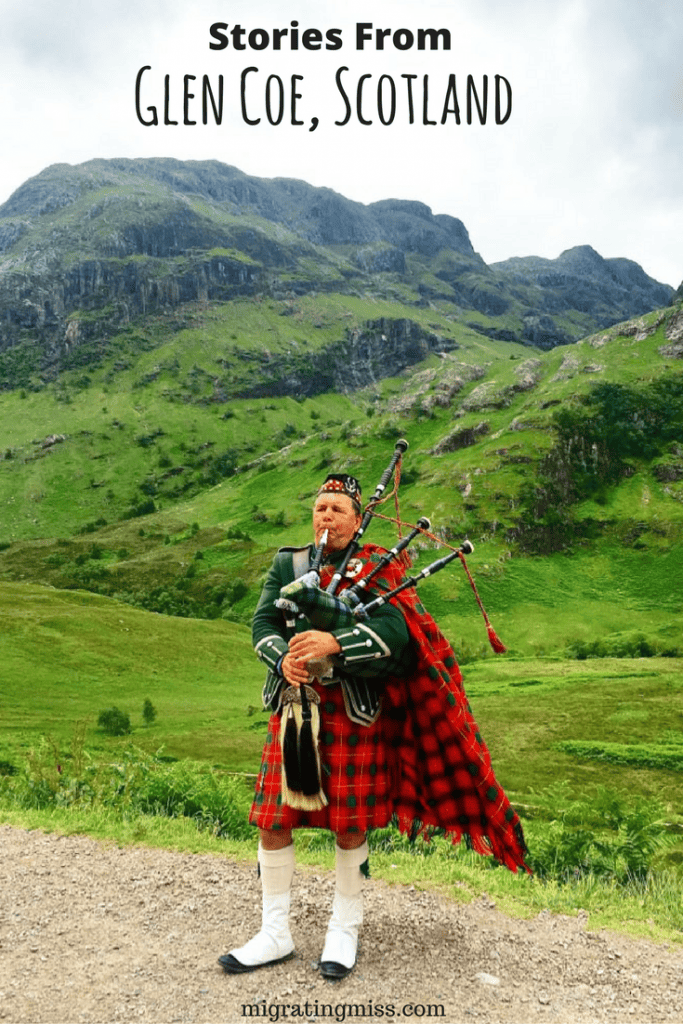 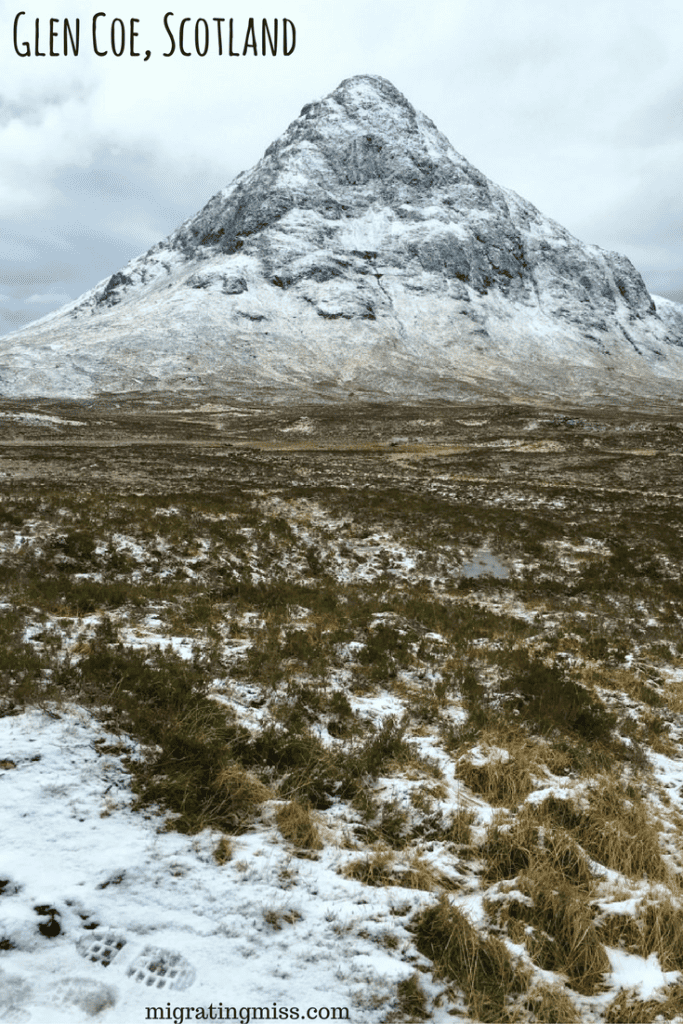 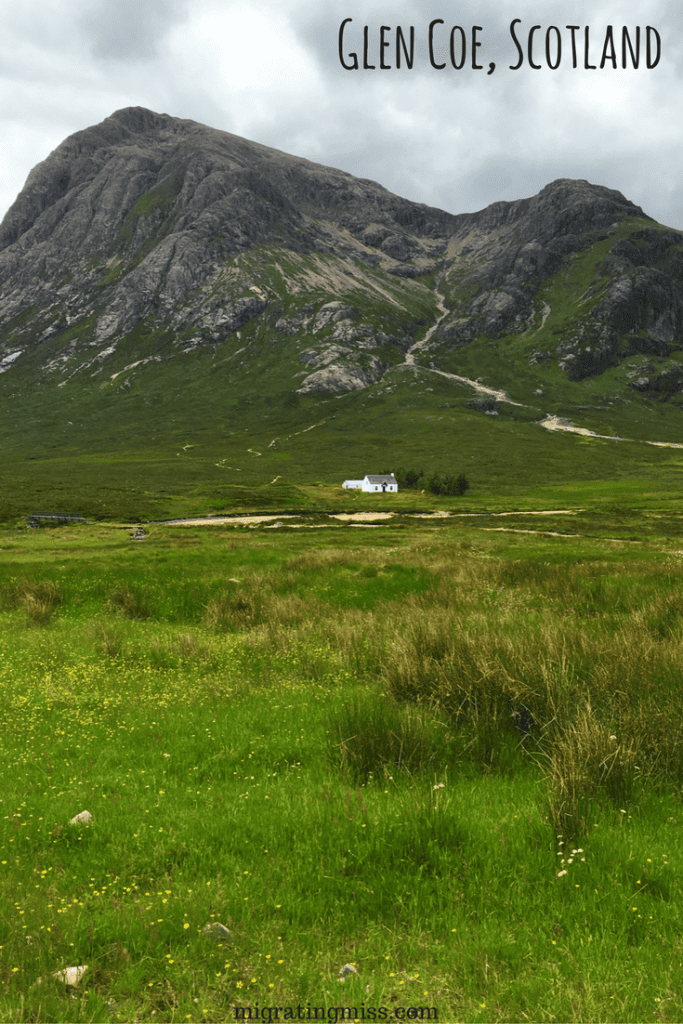 9 thoughts on “The Stories of Glen Coe, Scotland”