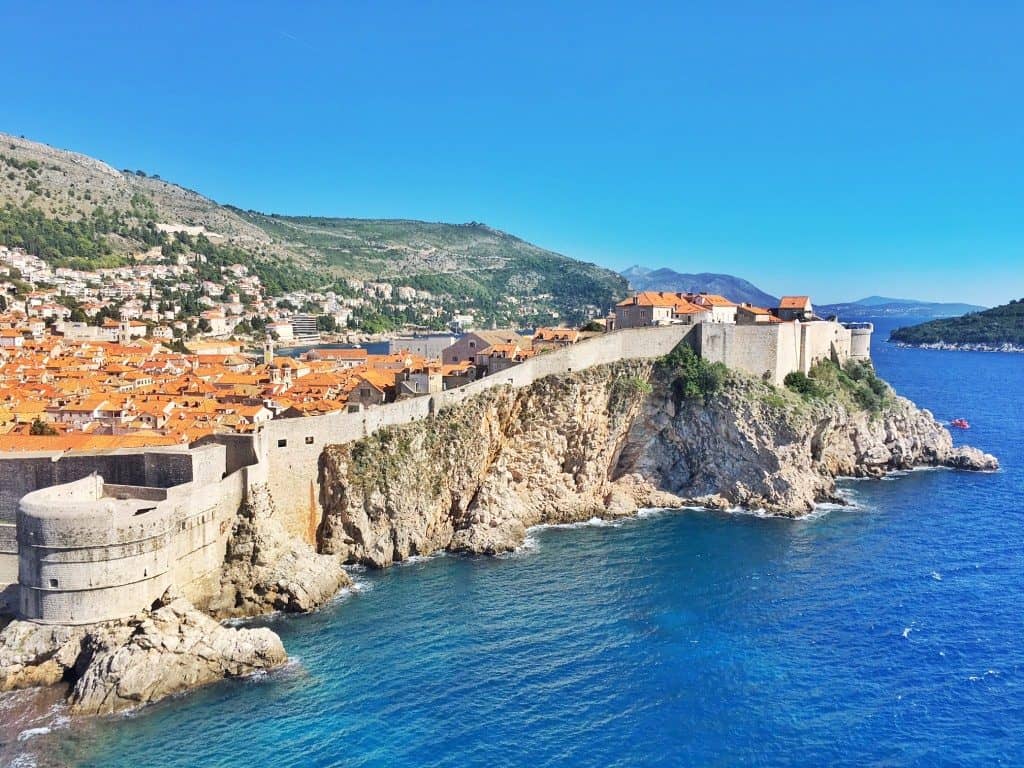 Dubrovnik is the feather in the cap of Croatia. If you go to one place in Croatia, and you had just one day, then Dubrovnik should be it. In the Old Town with its historic red roofs and narrow alleys of marble and granite, Dubrovnik feels part Game of Thrones, part Disneyworld. It’s not a newly discovered destination by any stretch, but after recovering from the break up of Yugoslavia in the 1990s and the recent use of Dubrovnik as a filming location, its popularity is still rising, and so are the prices!

Two years ago I first set foot in Dubrovnik for one day, and as part of a more recent trip to Kotor in Montenegro, I found myself once again with limited time in the city. With just one day in Dubrovnik, it was important to plan our time so we could hit all of the top things to do. There’s so much to see, and one step through Pile Gate will have you wishing you had more time, but if one day in Dubrovnik is all you have, then this is the must-see list! 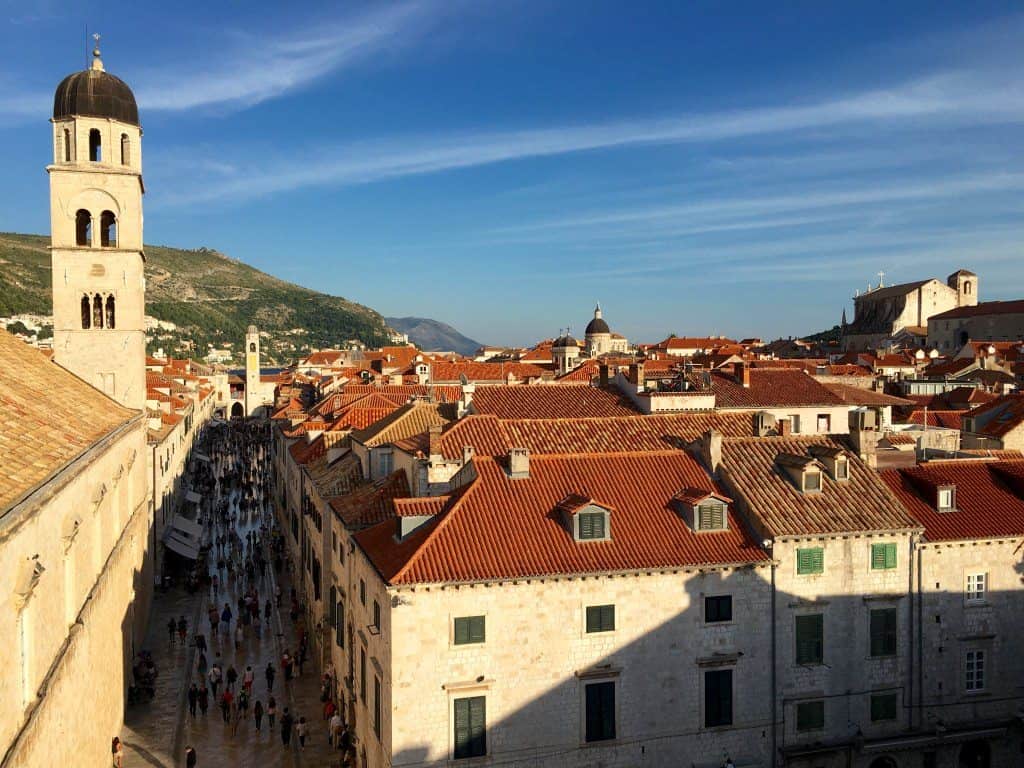 The number one thing to do in Dubrovnik in one day is walk the city walls. If you do nothing else but spend the rest of your time swimming or eating, then this should be it. Walking the walls of Dubrovnik normally costs 120HRK, and opening hours vary based on the season with the longest hours in the summer from 8am-6pm.

The main entrance to the city walls is near Pile Gate, but there’s also one at the opposite end of the city. The walk is one way only, and Pile Gate is a great place to start so you can end up back at the highest point of the walls.

The best time to visit the city walls of Dubrovnik is either early in the morning, or later in the evening. Dubrovnik is a cruise ship town, but usually, the cruisers won’t arrive until a little later and will head off a little earlier. Our Airbnb apartment was next to the city walls, and from mid-morning until mid-afternoon, we could see people walking the city walls like Lemmings! We went an hour before closing time and were treated to views of a fantastic sunset over the red rooves of Dubrovnik, plus far fewer people. 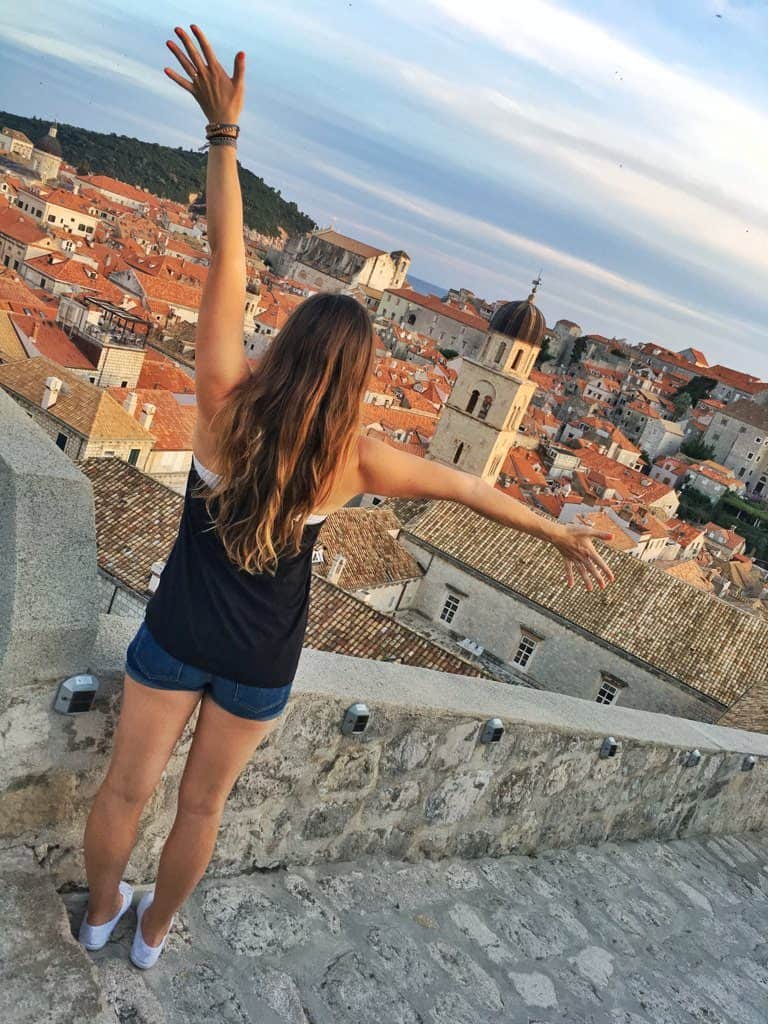 When you’re walking the city walls, or if you enter Dubrovnik through Pile Gate you might spot another fortification just across a small bay. This is Fort Lovrijenac, and it has amazing views over Dubrovnik. It costs 30HRK, and you can climb several levels for different views. It’s another Game of Thrones filming location, but worth the visit even if you’re not a fan, so you can get a perspective of the whole of the Old Town that isn’t possible when you’re on the city walls themselves. 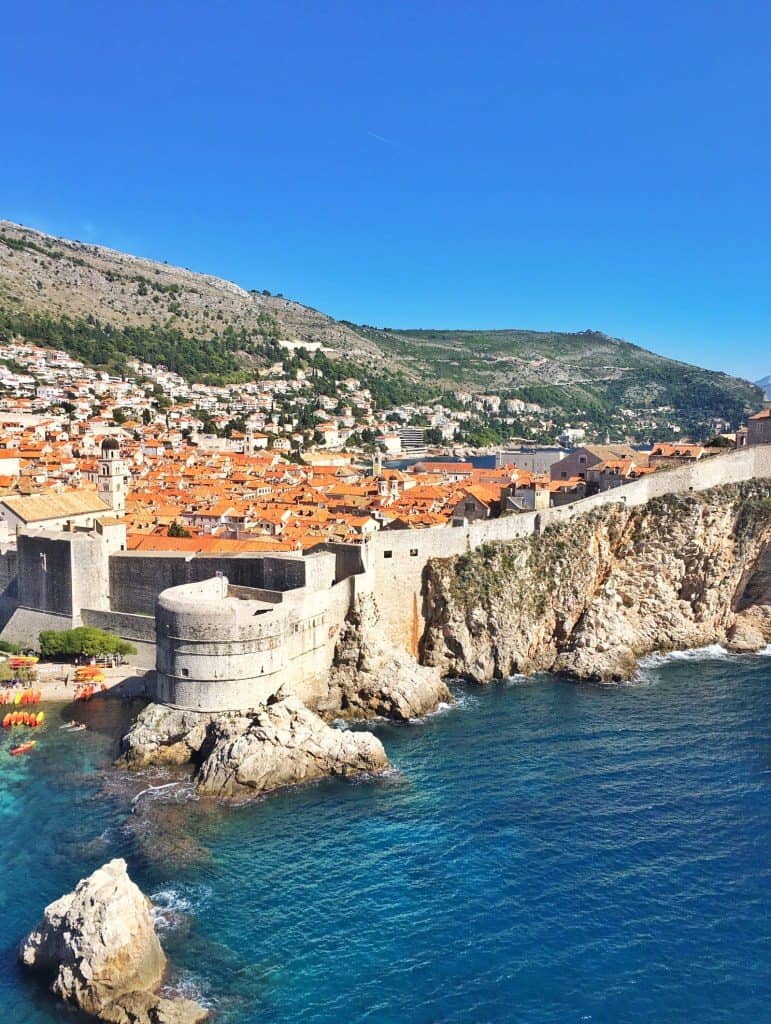 There are several entrances to the Old Town of Dubrovnik, but by far the most impressive is Pile Gate. If you don’t happen to enter Dubrovnik by this gate, you can find it to the west of the city. If you’re a Game of Thrones fan then Pile Gate is one Dubrovnik film location you’ll want to visit!

Dubrovnik is a fantastic base for visiting the Croatian islands, but if you only have one day in the city and you still want to get out, then Lokrum Island is a great option. Many locals go to this island to swim and escape the more crowded beaches near the city. There’s also a monastery, restaurant, and botanic gardens. It’s only 10 minutes by ferry from Dubrovnik and there are multiple ferries per day.

Budget Tip: Go to the supermarket or bakery in Dubrovnik and take a picnic lunch with you to the island. Explore the beaches and the gardens and come back in time to climb the walls before closing time!

If you don’t want to visit Lokrum Island there are beaches close to Dubrovnik. There are both sandy and pebble beaches along the Lapad peninsula. Banje beach is probably the most famous in Dubrovnik, with views of the walls of Dubrovnik and Lokrum Island.

One of the most famous and unique things to do in Dubrovnik is swim just outside the Old Town walls. And I mean literally just outside. On the southern side of Dubrovnik, you can find a hole in the wall bar called Buža Bar. Enjoy a refreshing drink overlooking the Adriatic Sea, and then jump right off the rocks below for a swim!

For a quieter and no less beautiful swimming location, try Šulić Beach near Fort Lovrijenac.

Budget Tip: You don’t need to buy a drink at Buža Bar to swim there, you can just continue down the stairs for a swim! 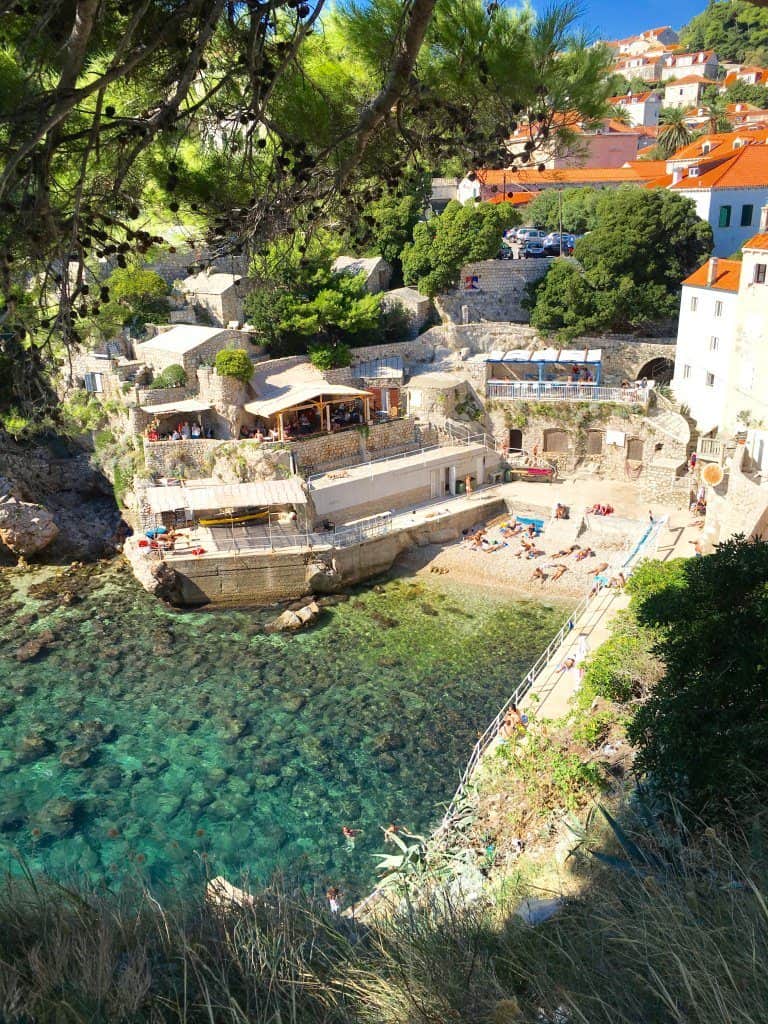 Towering behind Dubrovnik is Mount Srd. You can take a cable car from just outside the northern side of the city. It costs 120HRK for a round trip up to see the stunning views over Dubrovnik and the bay. The museum of the Croatian War of Independence is located here, along with another fortress.

Budget Tip: Instead of paying to take the cable car, get some exercise and climb Mount Srd yourself! It will take around 90 minutes, and the views on the way up can be even better than those at the top. Wear suitable shoes because the path is rocky. 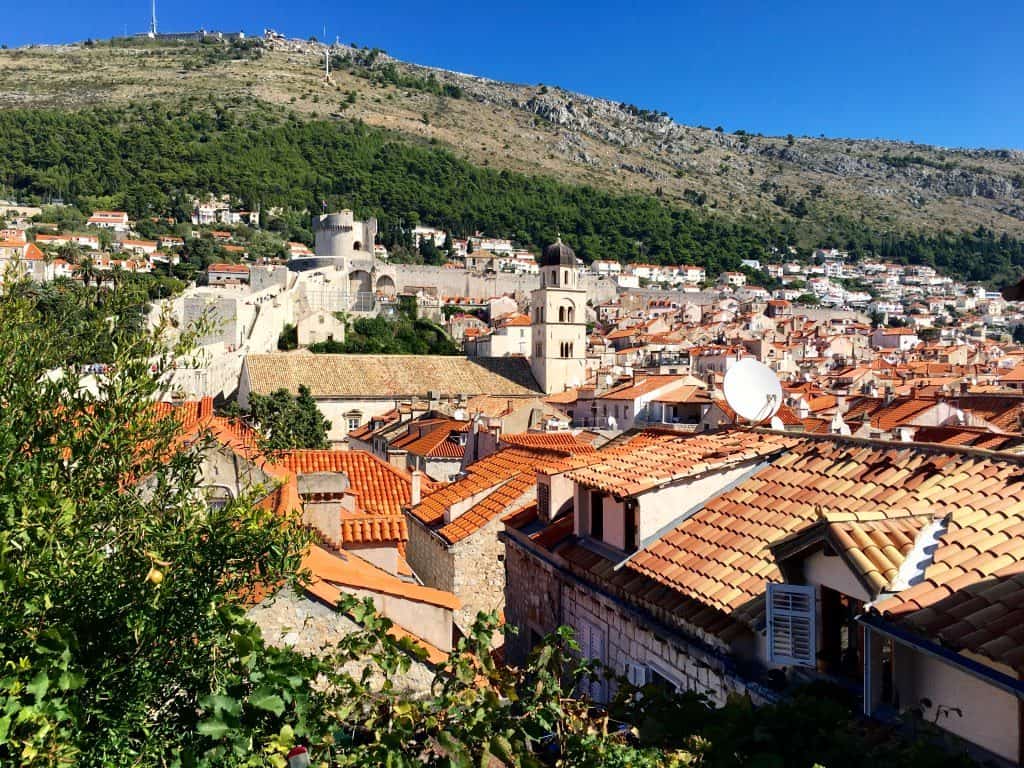 Instead of swimming, you can kayak outside the city walls of Dubrovnik. While I didn’t do this personally I watched kayakers from Buža Bar and Fort Lovijenac and it looked like so much fun! The water around Dubrovnik and so clear and you can even hire a clear kayak to enjoy it even more. 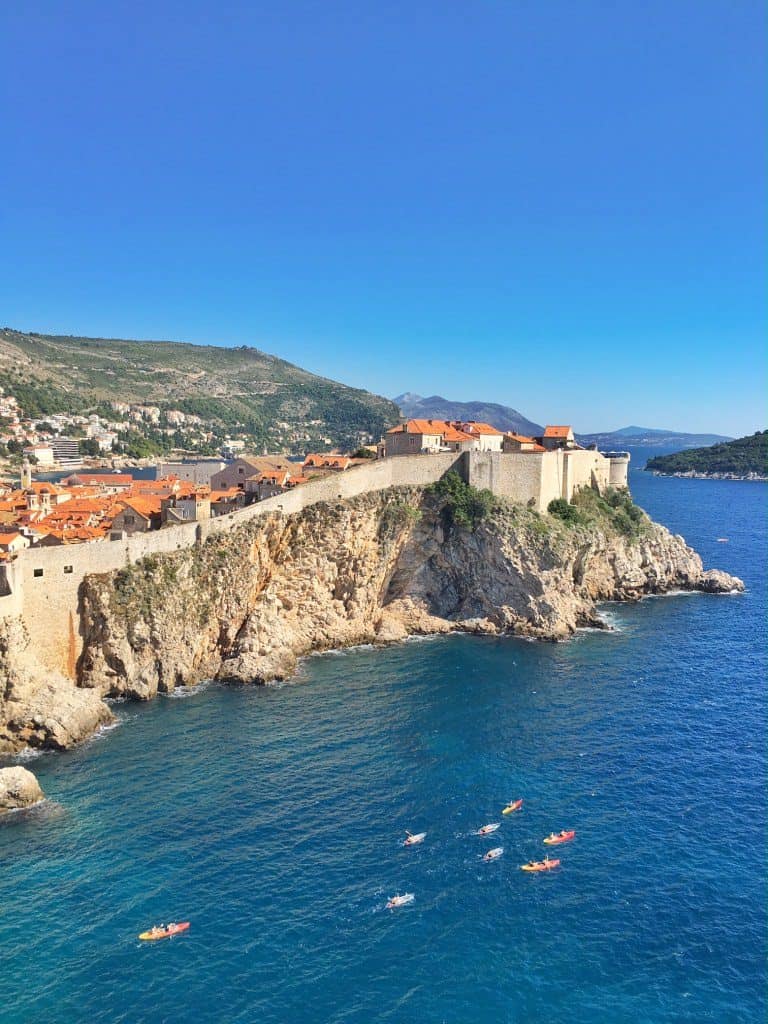 Consider buying the Dubrovnik Card to give you discounts on attractions around the city. For one day in Dubrovnik it will cost 170HRK, but if you buy online it’s 10% off which is 153HRK. It includes entrance to the city walls and 6 museums, plus 24-hour bus transport. If you’re into museums and want to visit one or two, or you’re taking transport to stay outside the city, visit beaches nearby or go to the bus station to head to your next destination then it will save you some money to buy this ahead of time. 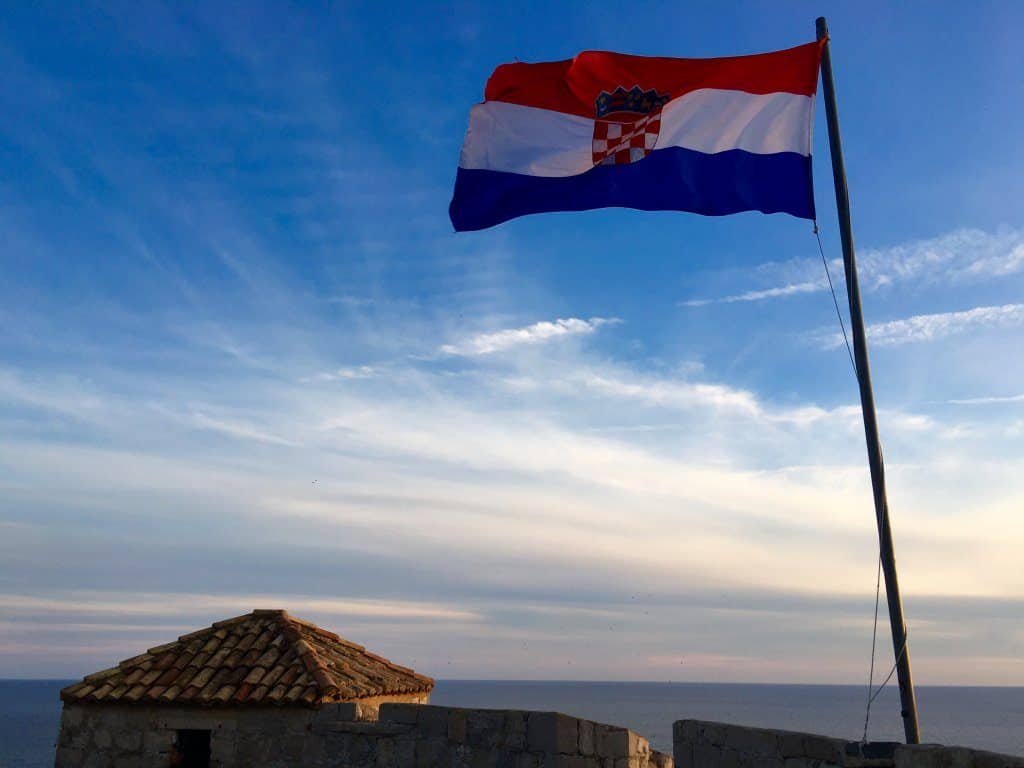 Where to eat in Dubrovnik

Croatian food usually consists of seafood and meat as well as the occasional wood fired pizza place. Dubrovnik is by far the most expensive place I’ve visited in Croatia, and it’s no surprise that the food is much more expensive than elsewhere.

Budget Tip: The best bakery in the Old Town of Dubrovnik is on the main street, of Stradun, not too far from Pile Gate. It’s definitely the cheapest way to eat and was recommended by our Airbnb host who is a local of the city. And they have delicious burek which is pastry with cheese, meat, or cheese and spinach. Enjoy eating it sitting on the steps of a nearby fountain and people watching. 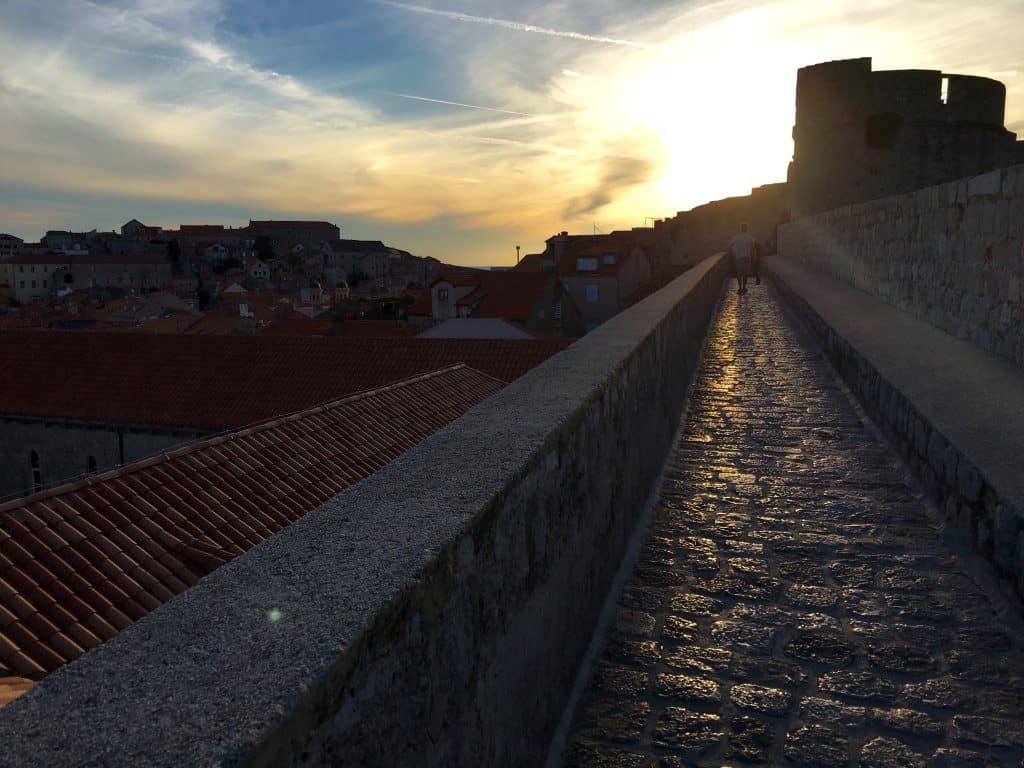 Getting to Dubrovnik and around

The Old Town of Dubrovnik is pedestrian only and therefore easily walkable. If you’re not staying in the city then there’s a local bus network which should deliver you to just outside the gates.

Dubrovnik Airport is 20km south of the city, and buses from there will take you to Dubrovnik Bus Station which is the opposite side of the city. From there you can jump on another bus that takes you to Pile Gate. It leaves from the last stand at the station. 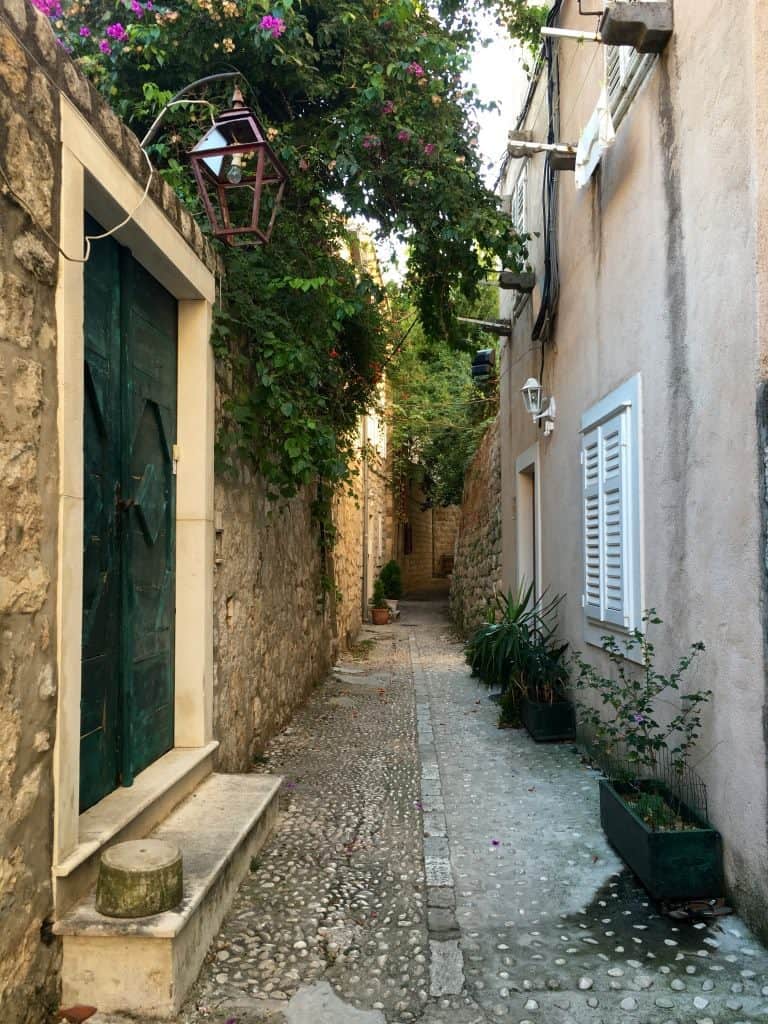 Where to stay in Dubrovnik

Once again I turned to Booking.com for our stay in Dubrovnik and came across a gem of a place that operated like an Airbnb, but through Booking.com instead. It was a small studio apartment with a terrace overlooking the Old Town, from the southwest corner. Using Booking.com means no cancellation fees if you have any issues, and it operates just like Airbnb for private apartments.

If you only have one day in Dubrovnik then I would highly recommend staying in the Old Town, so everything is right on your doorstep! 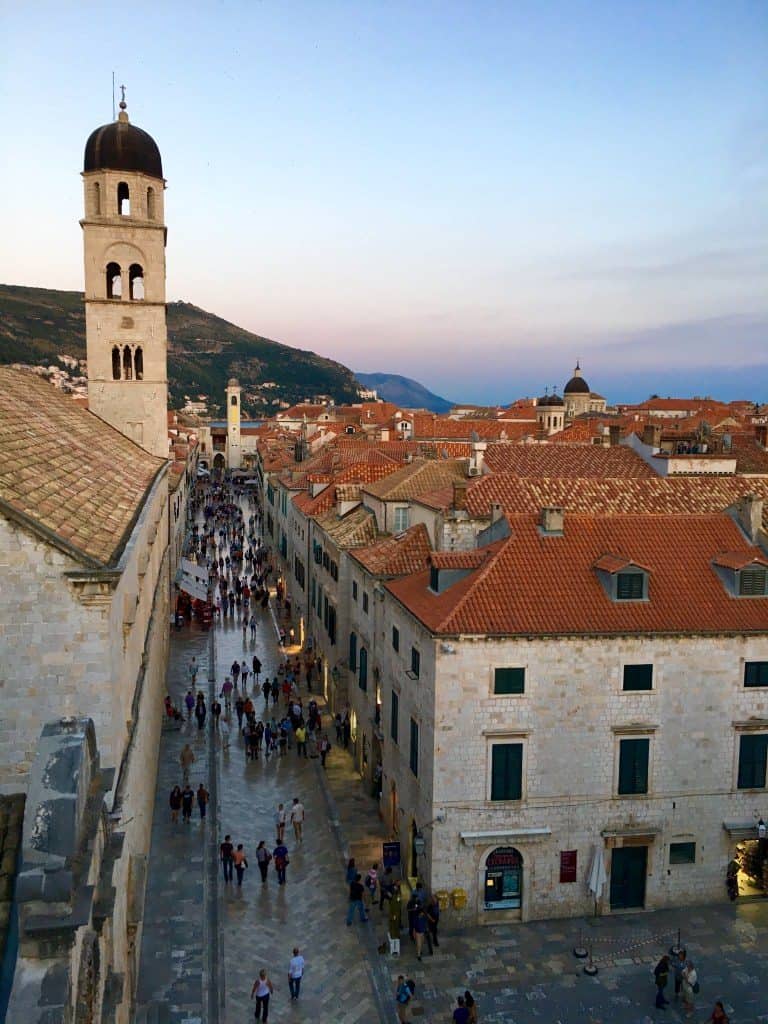 Is one day in Dubrovnik enough? Probably not to be honest unless it’s a FULL day, but you can see a lot in a short time and as the city is getting busier and busier every season (to the point where they may limit how many people can enter) it is also enough for many people.

One day in Dubrovnik is just enough to hit the top things to see, but not enough to truly get into Croatian culture and history. But if you have more time in Croatia then visits to nearby islands and heading along the coast should definitely be on the cards. Plus, Kotor in Montenegro is just under 2 hours away (and it’s amazing).

Have you been to Dubrovnik? Is it on your list?

This post contains some affiliate links that cost you nothing but help me out! 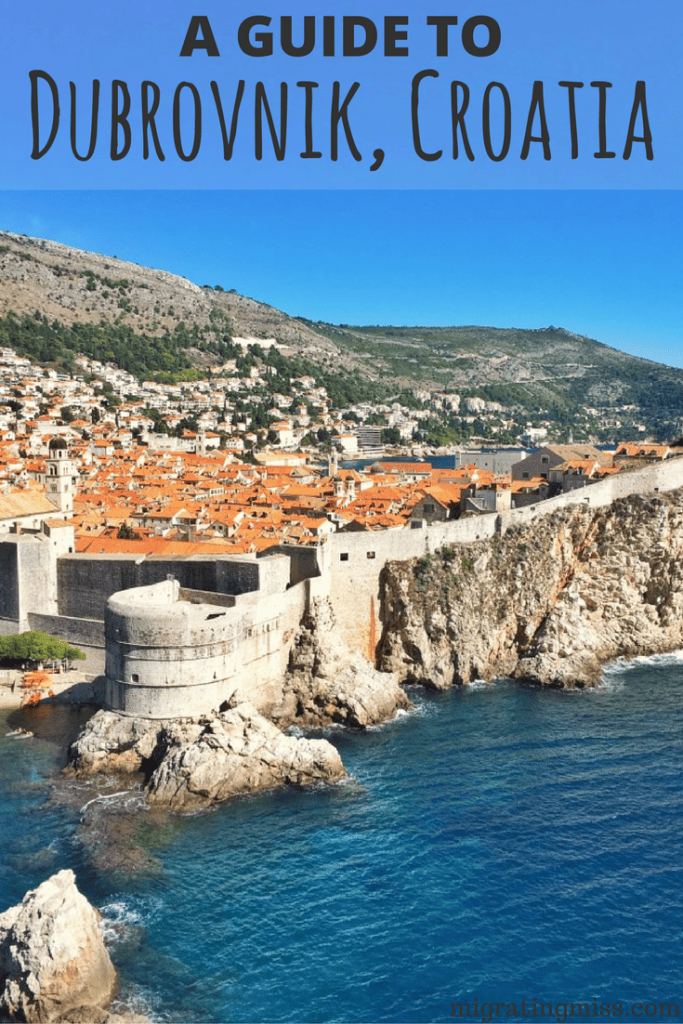 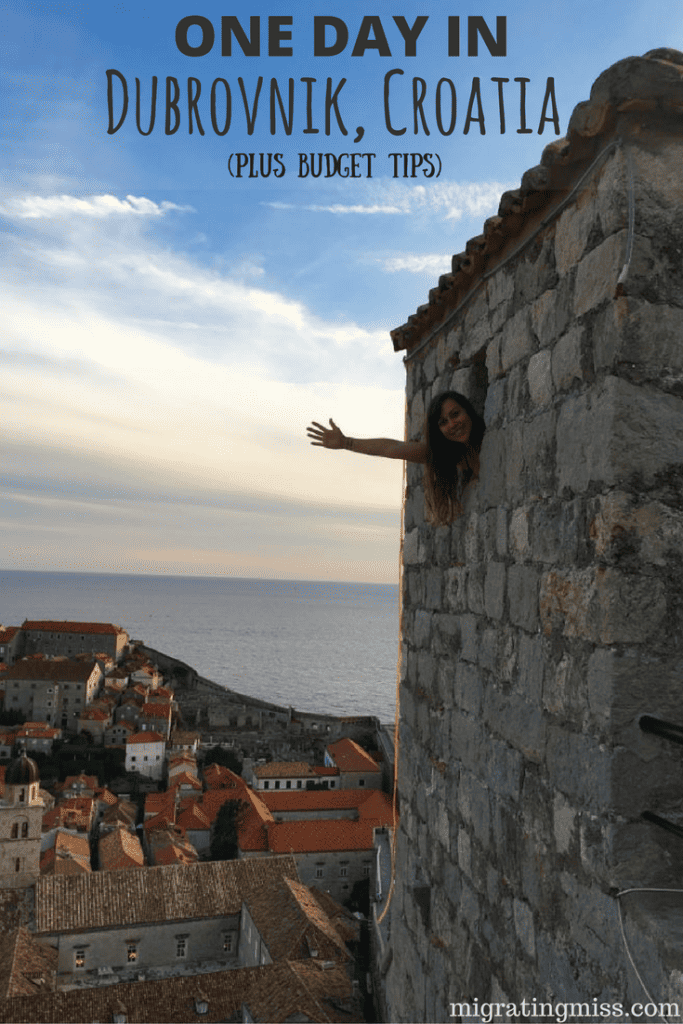 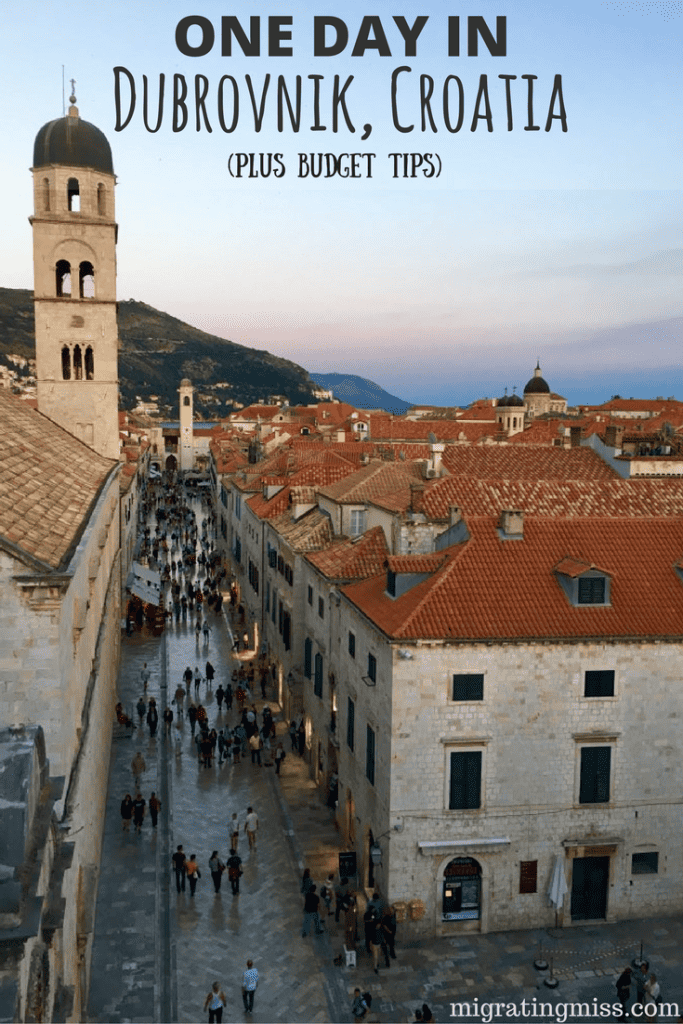 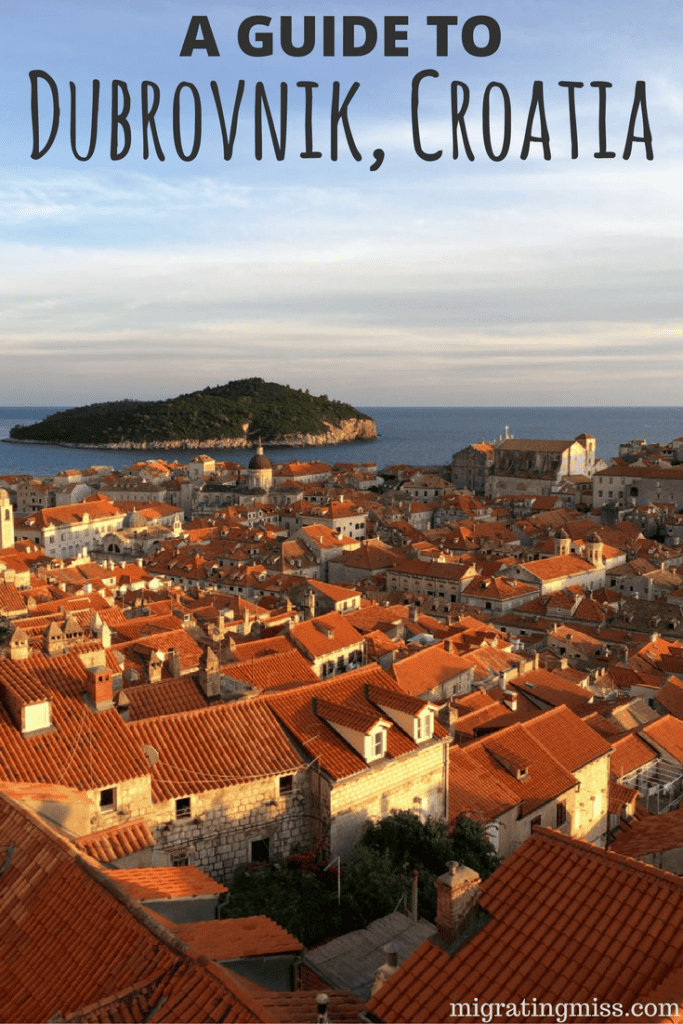