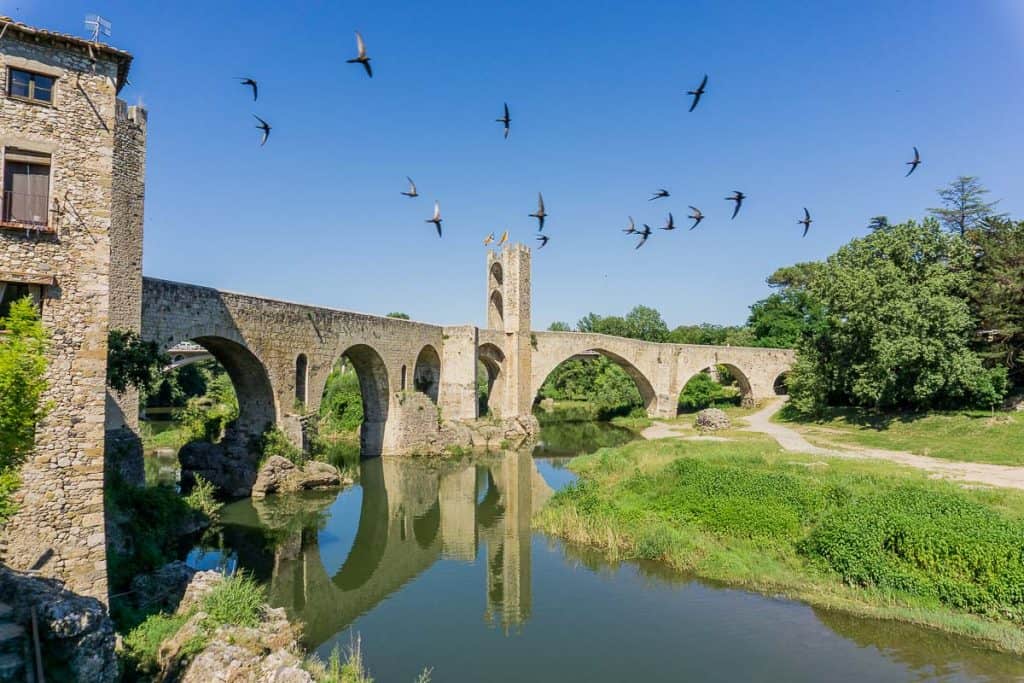 The words “fairytale”, “charming”, and “picturesque” are probably overused when it comes to describing historical towns, but the thing about Besalú is that it really is all of those things. From the impressive almost 1000-year-old bridge you walk across to enter the town, to the narrow cobblestone streets, building facades, and the church that’s far bigger than a village of this population needs, it is a charming picturesque fairytale come to life.

Besalu is in the province of Girona, in the heart of Catalonia in the northeast of Spain. If you visit Girona or the Costa Brava, then you should include Besalu in your itinerary plans. It’s 25 minutes from the fabulous Dalí Museum in Figueres, 35 minutes from Girona city itself and around 35 minutes from the coast. 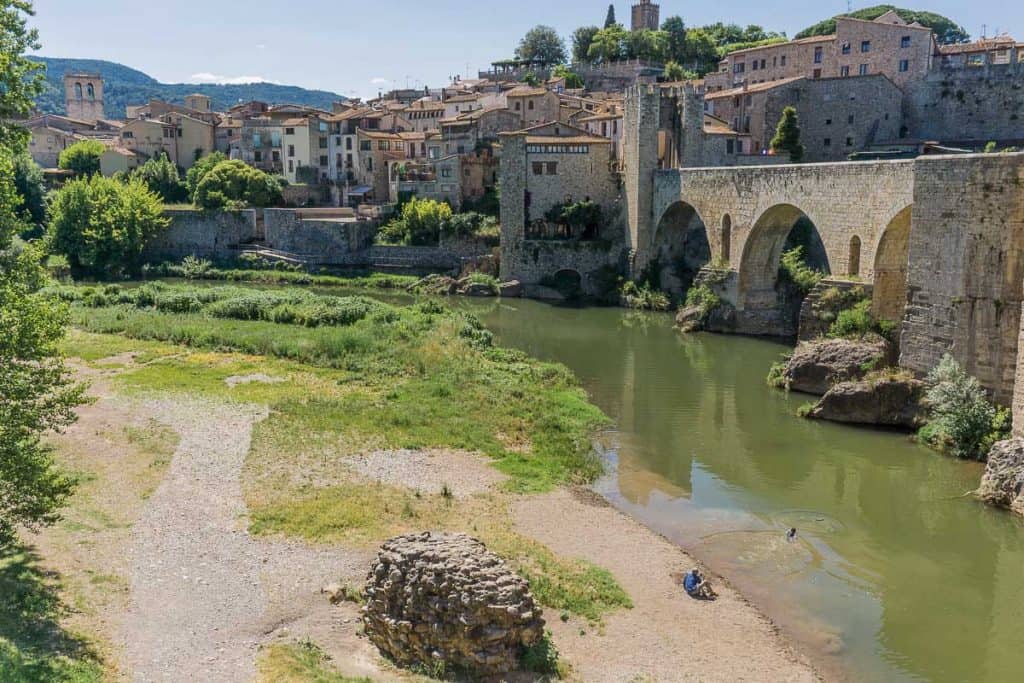 What to do in Besalú

There are only around 2500 people living in Besalú, and it is a small place that can be seen within a few hours, although it will feel like you’ve travelled to another age. In that time you should see all of the best things to see in Besalú but of course, you could always stay longer and I imagine being in the town for sunrise or sunset would be stunning (especially for photographers!). 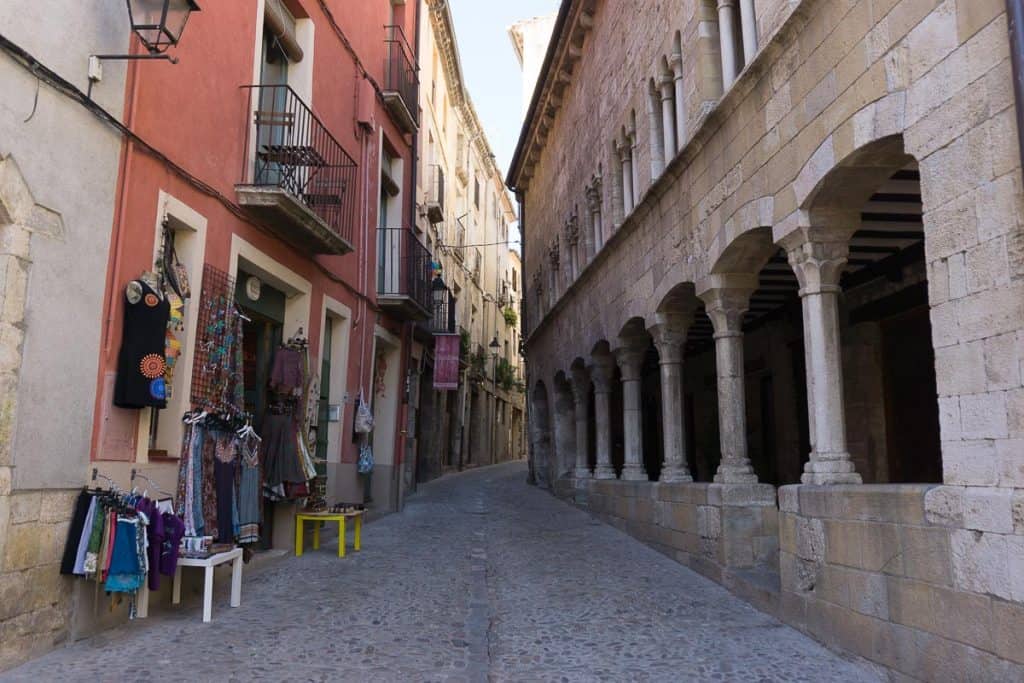 Learn about the Jewish heritage

It is believed there has been a settlement at Besalú since Roman times, however, it is the later Jewish community that makes this town so special. In Catalonia, many Jewish communities lived peacefully alongside Christian ones until the late 14th century and into the 15th century when the Jewish people were persecuted out of many places. However, in Besalú it is thought that the Jewish community was allowed to flee elsewhere with little bloodshed.

The Jewish Quarter contains the remains of a synagogue as well as the gate that the Jewish population had to use when they came to or from the town. However one of the most interesting parts of Besalú’s Jewish heritage is the bathhouse, or Mikveh. It dates back to 1264 and is one of only three remaining in Europe. It is where women used to wash as part of various rituals. The Mikvah was actually only rediscovered in 1964! If you want to visit, ask at the tourism office near the carpark before you cross the bridge. It’s hard for a picture to do it justice, you really need to visit! 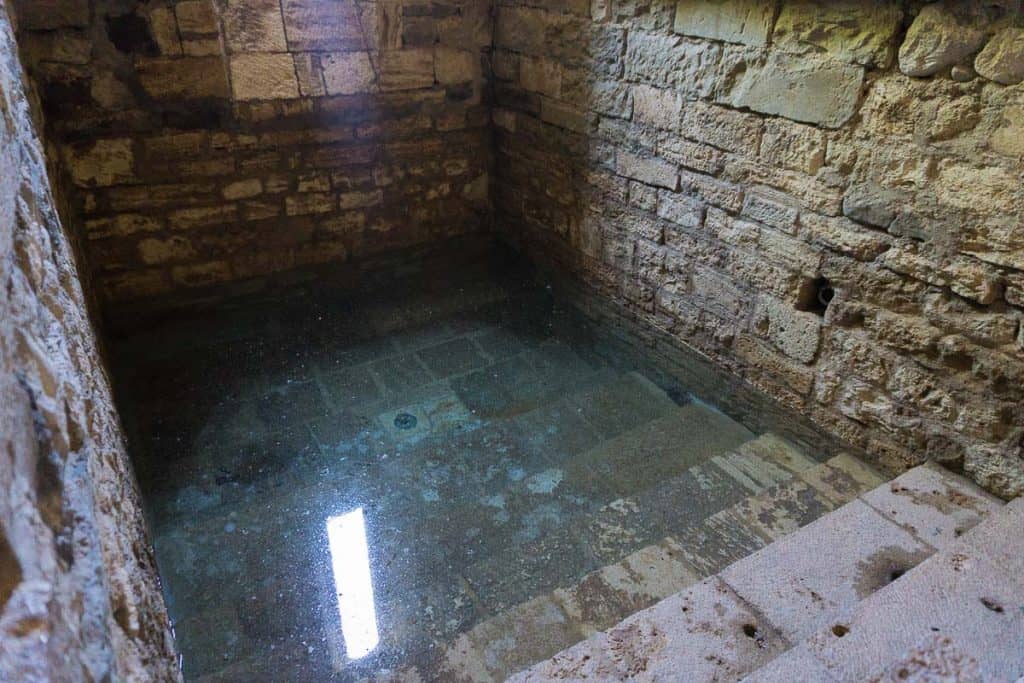 This monastery was founded in 977 and the building was renovated in 1160. It is interestingly constructed in the style of a Basilica and is very large for the size of the town. This is because the town used to be a capital in the area and because a large number of Pilgrims would pass through the church, circling around the outside naves and behind the altar.

One of the most iconic images of Besalú is, of course, the bridge spanning the river Fluviá. It has seven arches that were built onto existing rocks in the riverbed, meaning it takes on more of an L shape than straight across the river. In the middle is a fortified tower and then another gate by which you enter the town. Make sure you wander to different parts of the town to get various views of the river, and even down to the riverbank itself! 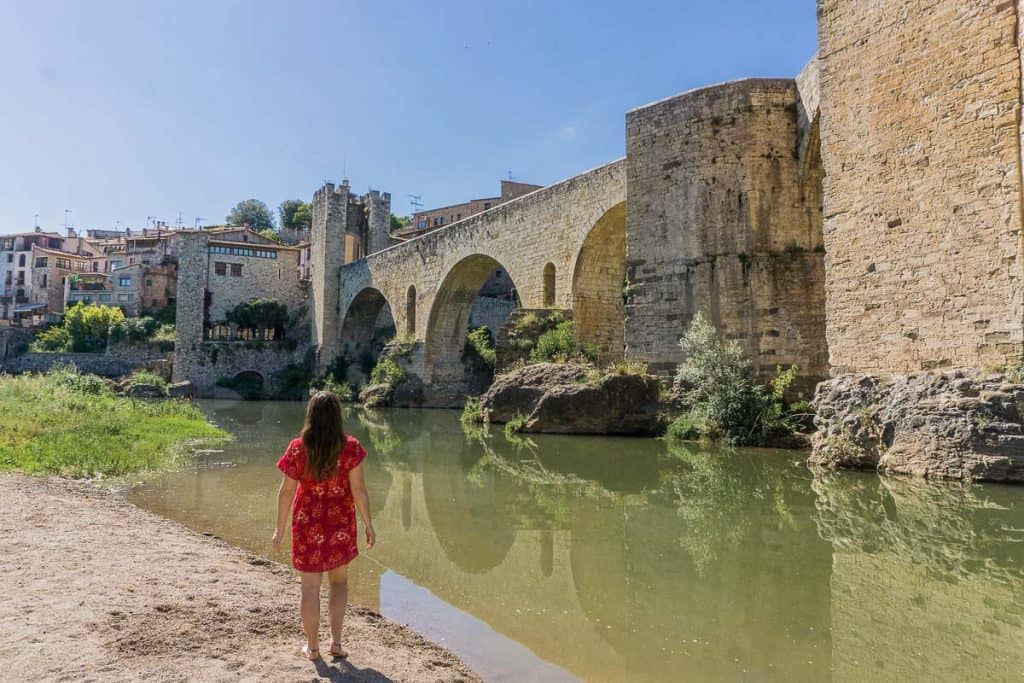 In the last weekend of August, a medieval festival is held in Besalú. The historic centre is transformed to show how it may have been historically with reenactments and other events. Many people turn up in costume and given the architecture of the town they really look like they fit in!

Make sure you check out the souvenir shops and look at the woven baskets or Catalan pottery available. Much of it is made locally! 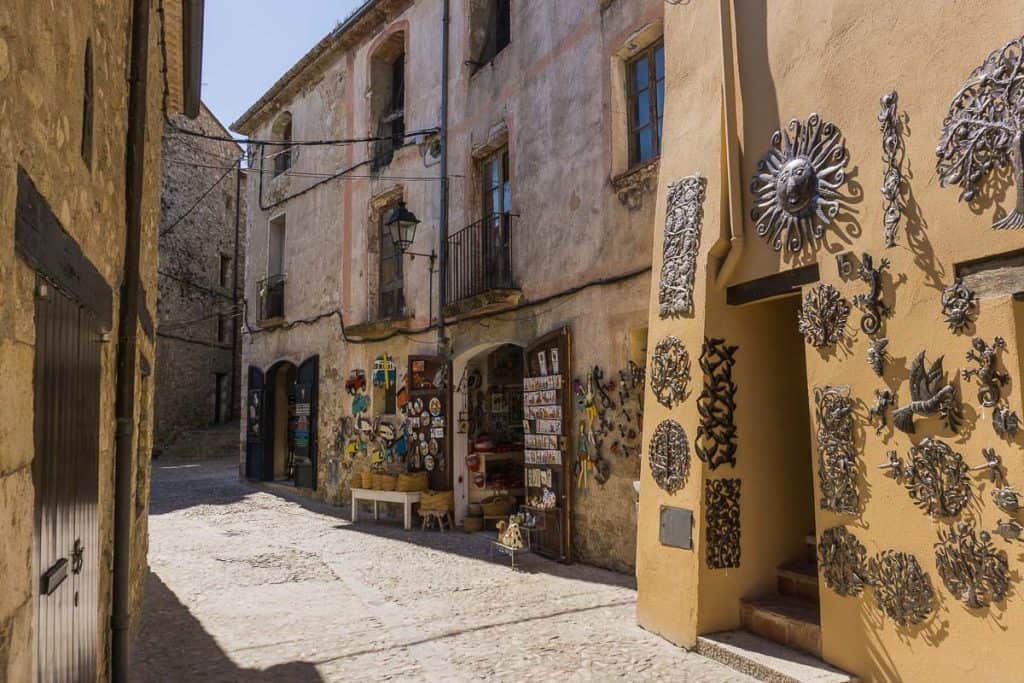 How to get to Besalú

Girona is the closest major city to Besalú, but it’s also accessible from Barcelona or Perpignan across the border in France. By far the easiest way to get to Besalú is by car and that also gives you the freedom to explore for as long as you like. There is a big carpark, from which you can see the tourism office to get more information before crossing over the bridge into the town.

It’s also possible by public transport. Girona is the closest train station so you would need to take a bus from there.

Teisa operates almost hourly buses from Girona between 7 am and 9.30 pm and return as well. The journey takes just under one hour.

It also operates 4 buses per day from Barcelona, but with a 1 hour 40 minute journey time, and 4 return journeys. It would be possible to do a day trip but you would need to time it carefully!

You can check timetables here.

Given it only takes a couple of hours to explore Besalú (although you could spend far more, especially if you like taking photos!) it may be worth looking into a tour that will include the town and other nearby destinations to make the most of a day trip. 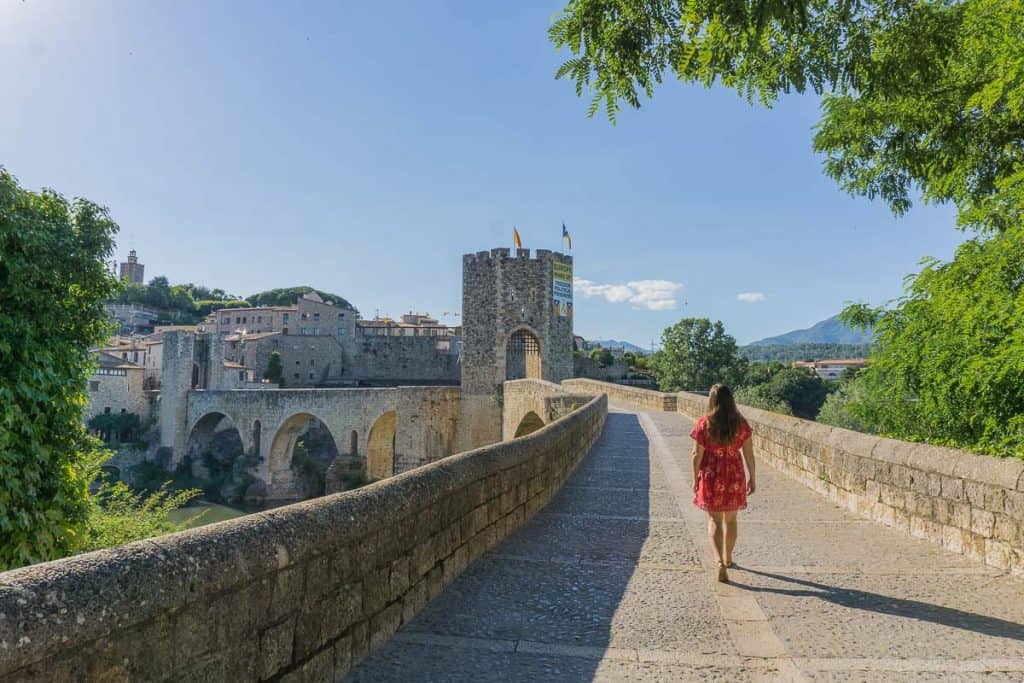 Places to visit near Besalú

Of all the towns we visited on the Costa Brava and near Girona, Besalú was definitely one of my favourites. It’s so distinctive and is such a beautiful little place!

My trip to Costa Brava was organised by Jet2holidays with Girona flights with Jet2 and Costa Brava Tourism. As always, all opinions are totally mine! 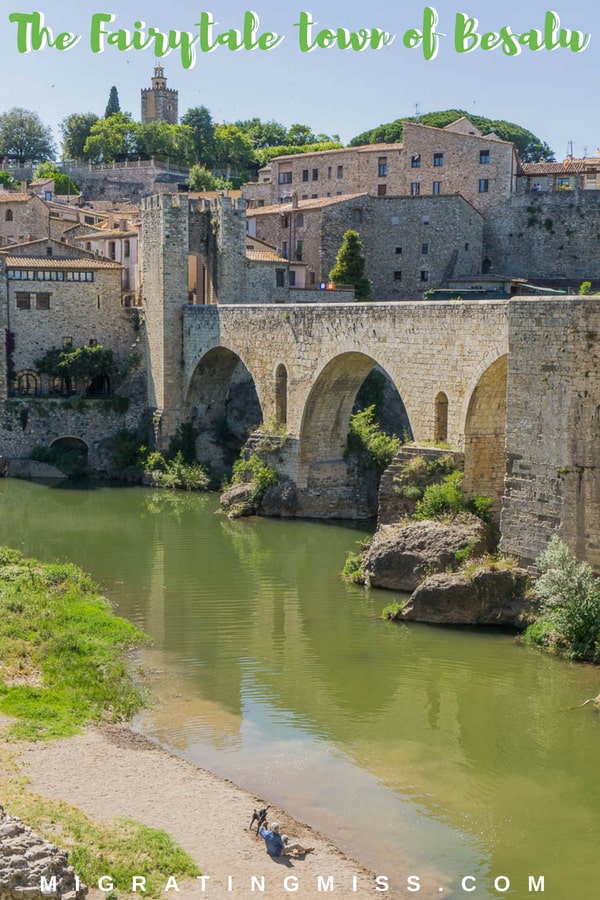 4 thoughts on “Why You Need to Visit the Fairytale Town of Besalú, Costa Brava”