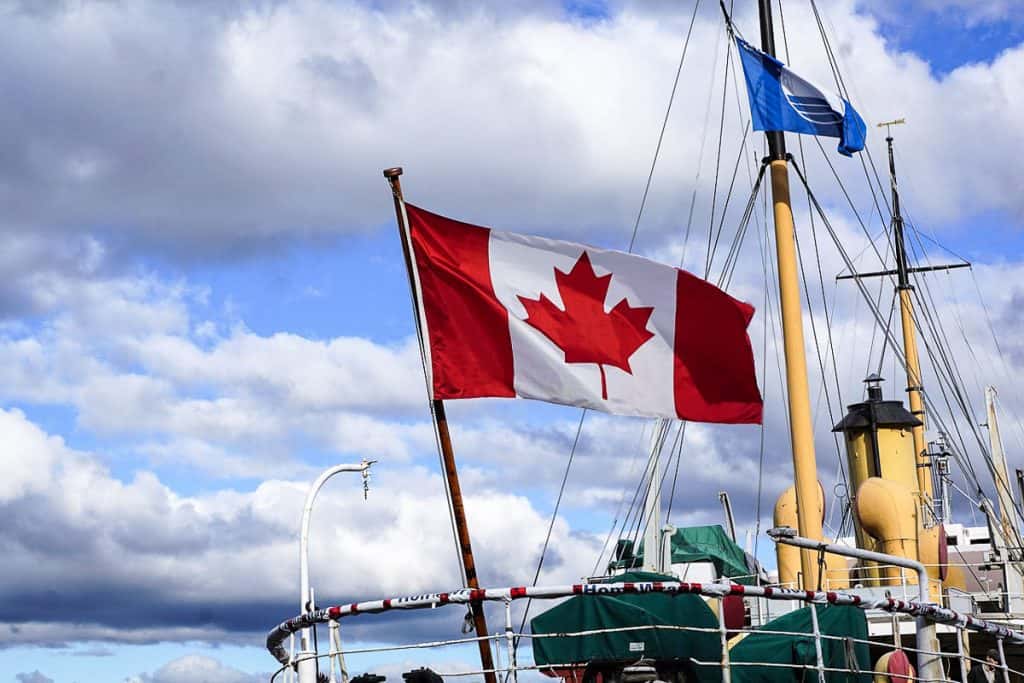 The following is a guest post by Amy Alton from Out Chasing Stars. Amy and her husband have been sailing around the world since 2014 aboard their boat Starry Horizons. They are currently spending cyclone season in Australia and will spend the next two years sailing in the Indian Ocean.

Sitting on the world’s second largest ice-free harbor, Halifax is the commercial hub of the east coast of Canada. While the west coast gets all the glamour from skiers and snowboarders, the east coast should not be overlooked, especially in the summer. There are so many great things to do in Halifax, Nova Scotia’s capital, that it really should be on more Canadian bucket lists! It’s got an amazingly eclectic vibe, a beautiful waterfront, and tons of history to satisfy every kind of tourist.

How to Get to Halifax

The best way to get to Halifax is to fly into Halifax Stanfield International Airport. Maritime Bus offers a shuttle service from the airport to the downtown bus station. Tickets for a return trip on the Maritime Bus are $40 per person. Halifax Transit, the public transportation system in Halifax, is just $3.50 per person to ride the public bus.

However, if you’re feeling really adventurous and want to see more of Nova Scotia than just Halifax, think about taking the train from Quebec, or take a cruise ship that explores the beautiful coastline of Nova Scotia and stops for sightseeing in Halifax. 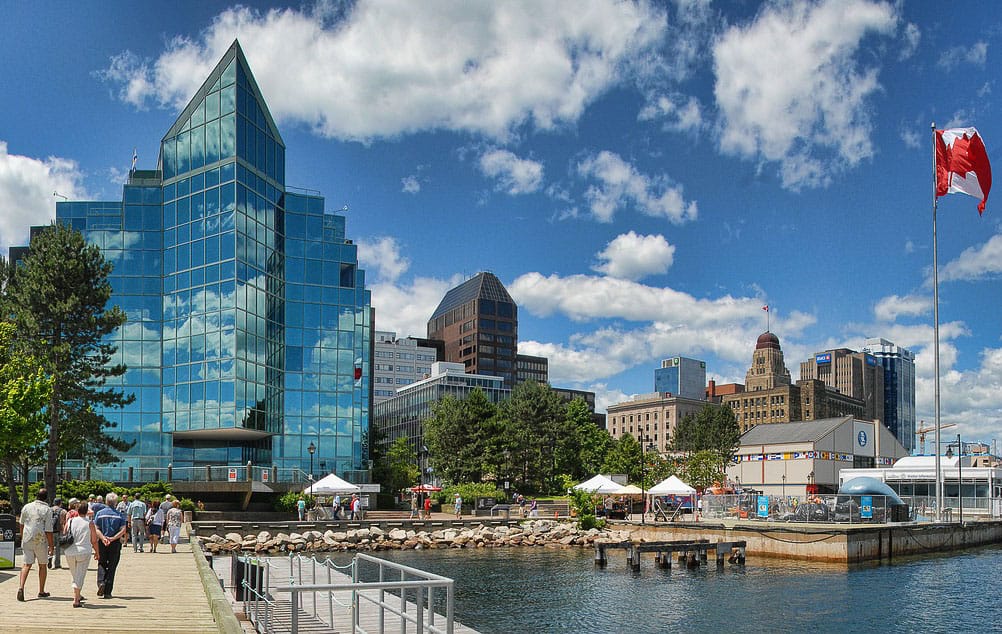 When to visit Halifax

We visited in July, which is the warmest time for Nova Scotia, although we found ourselves in shorts and tee-shirts during the day and bundling up at night. Halifax and Nova Scotia are most popular from May to October when the weather is warmer, so if you want to avoid the crowds then consider visiting between November and April. 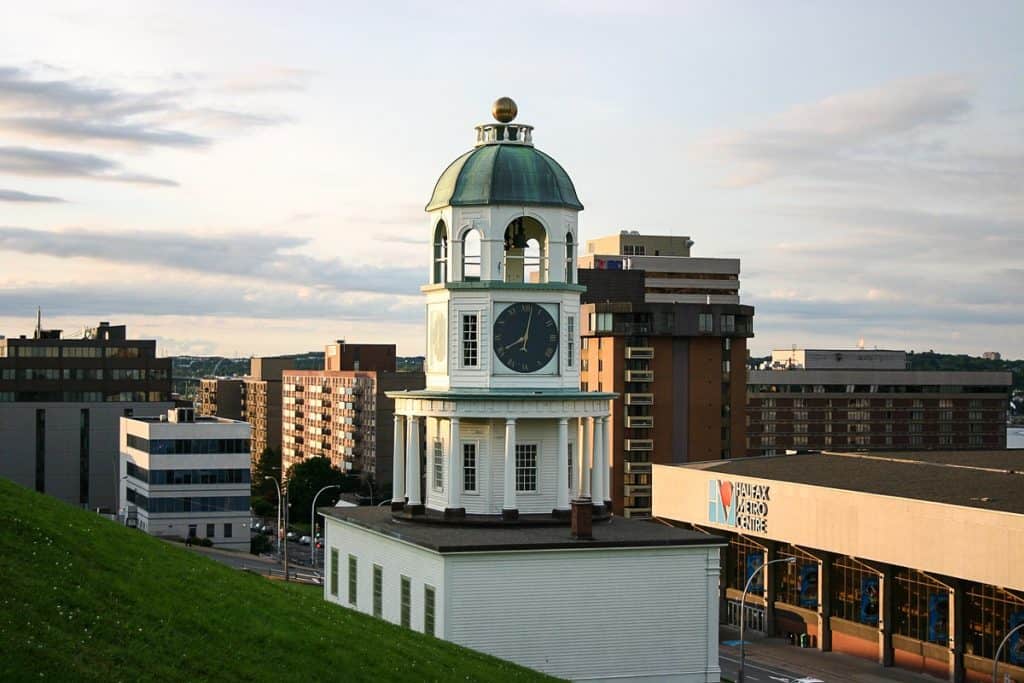 What to do in Halifax

Downtown Halifax has an amazing waterfront development with plenty of fun things to do. The boardwalk runs for about 2 kilometers, from the Immigration Museum to the Casino, and can keep a tourist occupied for days with all the activities nearby. It’s a great way to check out all the tourist attractions in Halifax for free.

Starting south outside the Canadian Museum of Immigration at Pier 21, you can peer up at the expansive cruise ships sitting in the Halifax Terminal. Across the harbor, you’ll notice George’s Island, a key military fort for the British.

Continue walking north and you’ll see there are several shipping containers that have been converted into a new life – beer gardens, coffee houses, and even a bike rental. There are also lots of eateries and wine shops.

Follow the water north to end your walk at the Ferry Terminal. The Terminal has arcades with shops and souvenir stores. 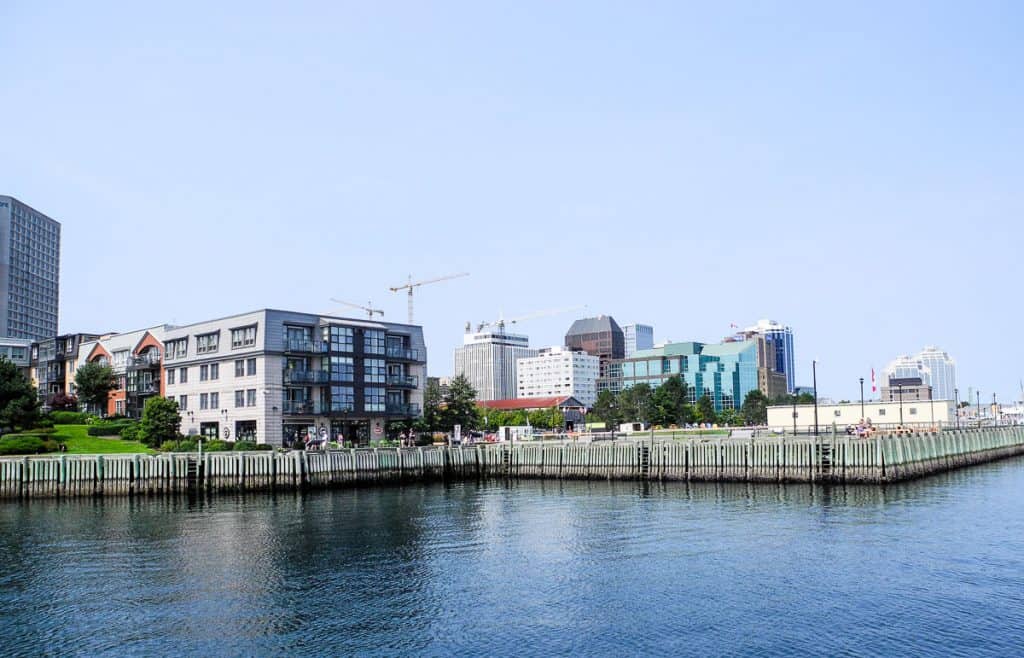 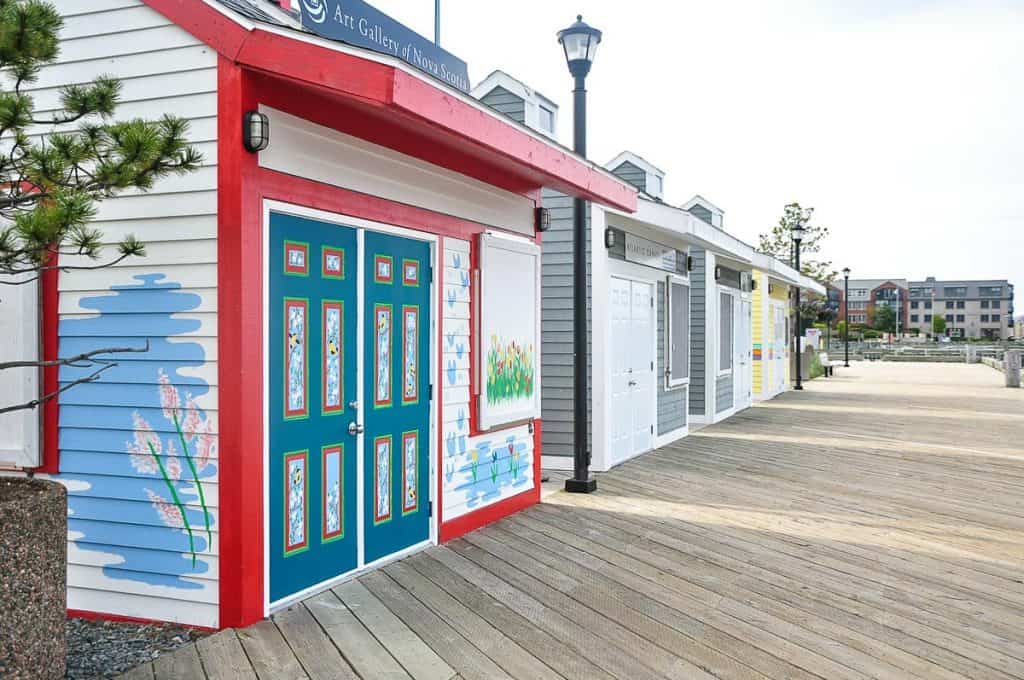 Just outside the Visitor’s Center on the waterfront is a playground for kids and a sculpture of a wave. The playground is designed as a submarine, keeping with Halifax’s nautical theme.
Across the docks, you’ll spot the HMCS Sackville, a WWII-era warship, now part of the Halifax Maritime Museum. Next door to the Sackville sits his much less intimidating neighbor, Theodore the Tugboat, a beloved children’s television show character. While it primarily aired in Canada, visitors from the east coast of the US may remember the show and get a bit nostalgic! 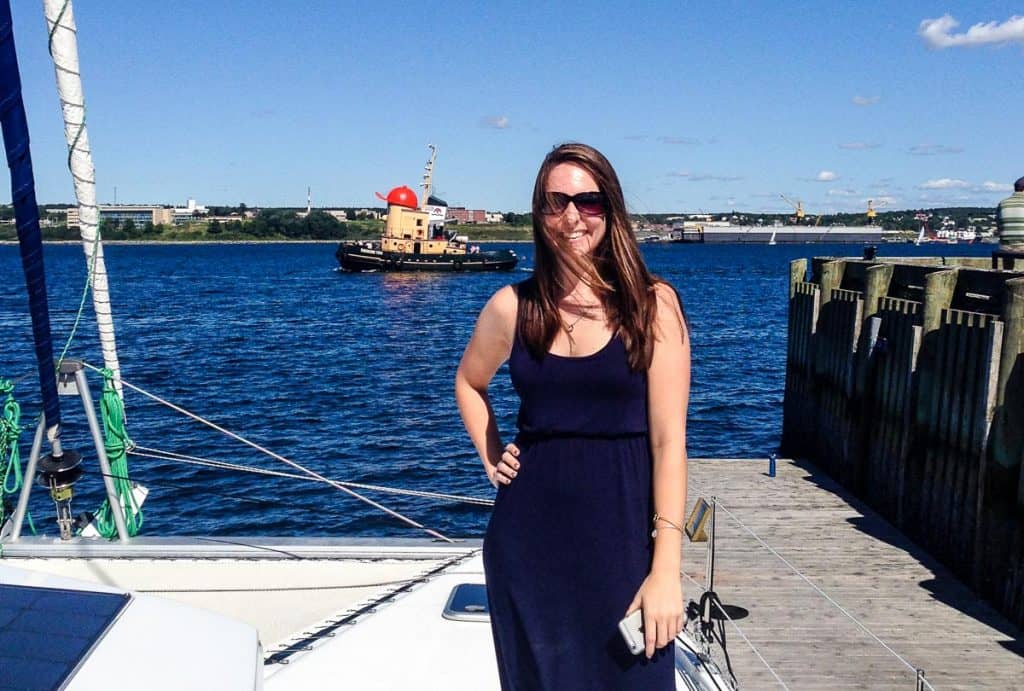 The most recognizable building in Halifax sits on a hilltop, looking down over the city and the harbor. A guard shack in the Citadel was the first building in Halifax, due to the viewpoint on the hill, and the city built itself around the military presence.

The Citadel doesn’t just offer ordinary tours. There are ghost tours in the evening, the changing of the guard, a military museum, and even a program where you can dress the part of a mid-19th-century soldier. 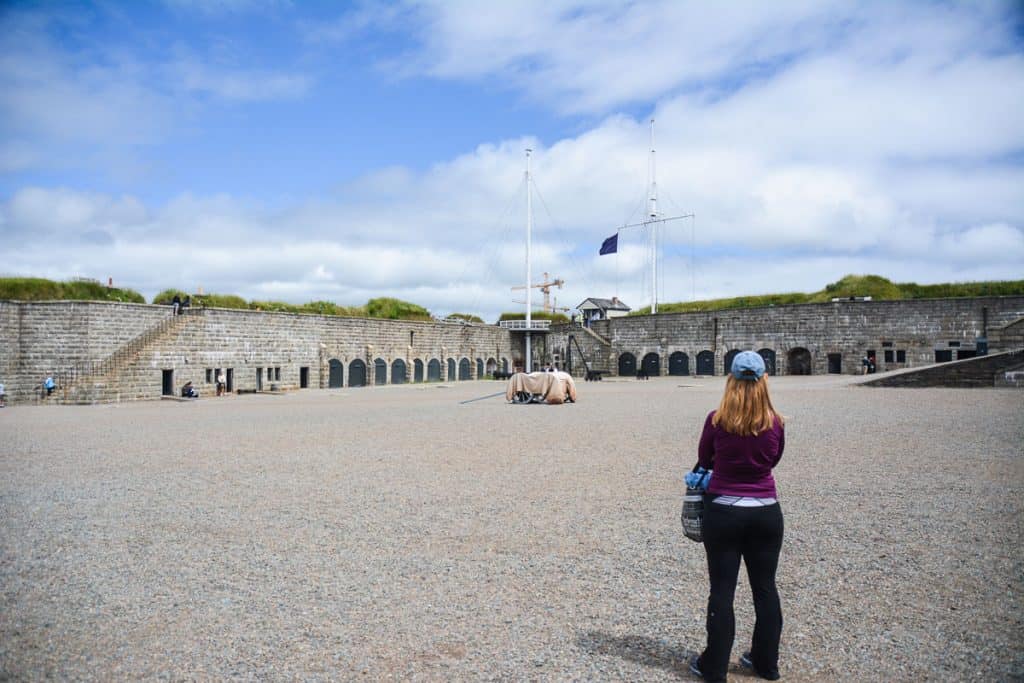 Being sailors, we found the maritime museum particularly interesting, but there are two large events that anyone would find fascinating; the Halifax Explosion of 1917 and the Titanic rescue efforts.

In 1917 in Halifax Harbor, two ships collided. One was carrying explosives, which detonated and caused the largest man-made explosion prior to the nuclear bomb. The museum displays many personal statements and news articles about this time and even has some photos of Halifax before and after the explosion.

When the Titanic sunk, Halifax was the closest large port to launch rescue services, to look for survivors and recover bodies. In fact, many of the bodies that were recovered are laid to rest in the cemeteries of Halifax. 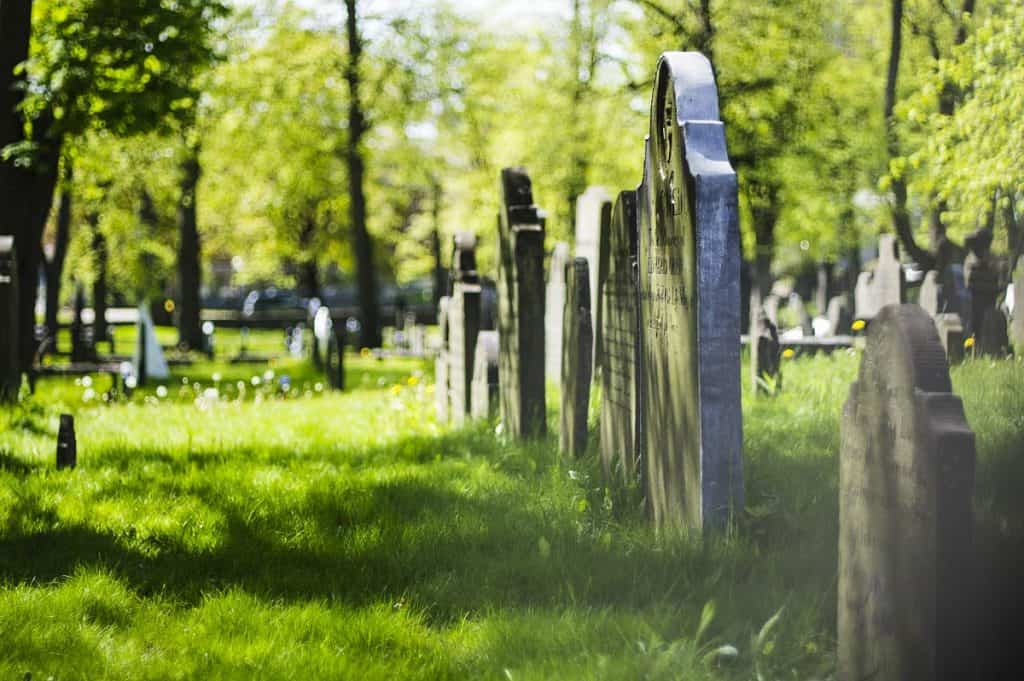 During the summer, the Canadian Sea Turtle Network runs a kiosk educating the public about leatherback sea turtles. Leatherback sea turtles make their migration up the Atlantic every year from the Caribbean, looking for jellyfish to eat. If you happen to see one while in Canadian waters, report the sighting to the CSTN!

The Halifax Seaport Farmer’s Market is open every day except Monday. It is a great place to pop in and grab a coffee, doughnut, or some locally grown summer berries to snack on. This market is the oldest continuously operating market in North America, having been established in 1750. It’s impressive to think about farmers braving the Nova Scotia cold in the winter and bringing their wares to market hundreds of years ago. 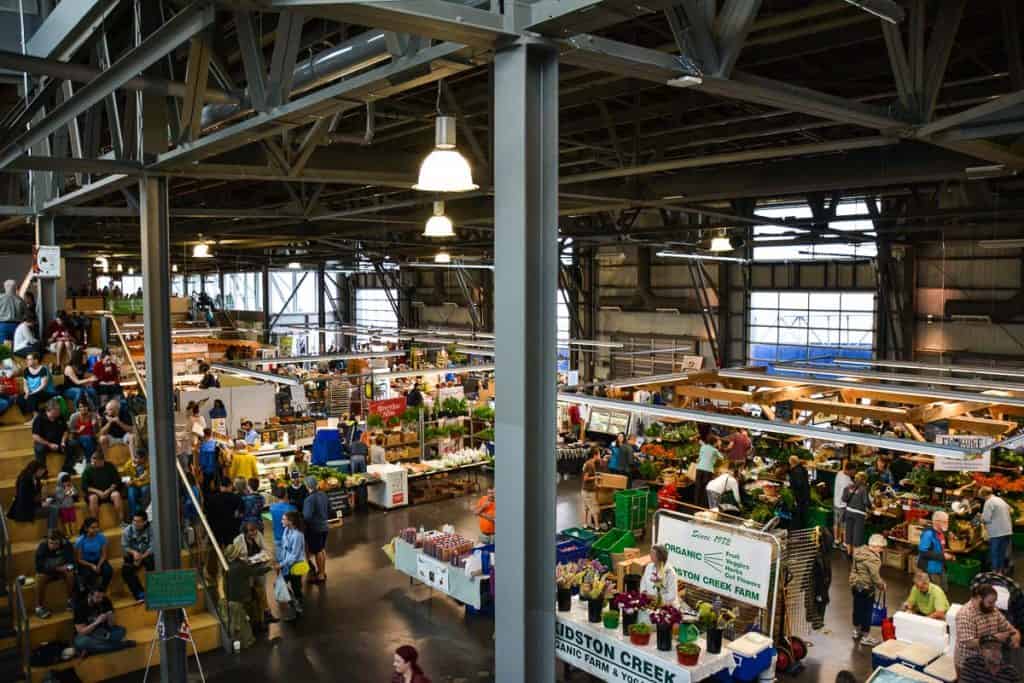 What to eat in Halifax

After all of your exploring in Halifax, work your way through the amazing things to eat! The Queen’s Landing Kiosks house several local specialties: try Dave’s Lobster for a lobster roll, a signature Halifax dish; Smoke’s for classic Canadian poutine, which is french fries with cheese curds and gravy; or order the namesake dessert at BeaverTails, a round, flat pastry with sweet toppings.

Additionally, Halifax is on the craft brewery train and has been for almost 200 years. Alexander Keith’s Nova Scotia Brewery opened in 1820 and offers tours of the brewery, as well as rooftop dining.

If you’re out late, join the hordes of Haligonians at Pizza Corner, the intersection of Blowers and Grafton Streets, to look for Halifax’s official snack, the donair. A relative of Greek gyro, the donair is filled with beef and a special, Halifax-crafted, sweet and garlicky sauce. 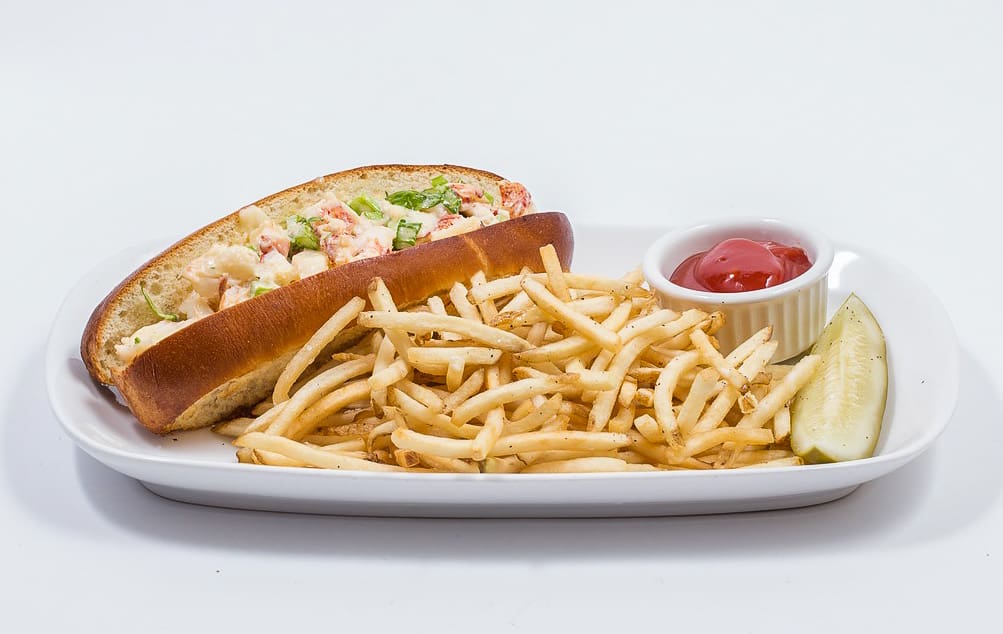 Where to Stay in Halifax

We stayed in the Bishop’s Landing area, which was an easy walk to everywhere we went. There are tons of upscale restaurants nearby or try the kiosks or farmer’s market for a quicker and cheaper bite.

Where to go from Halifax

If you’re coming a long way to Nova Scotia, it’s likely you’ll want to see more than just Halifax if you can. Nova Scotia is known for its beautiful scenery and wildlife, with puffins, seals, and whales, and its a great destination for water sports like kayaking.

A popular day trip from Halifax is to Lunenburg, a picturesque seaside town about an hour south via car.

If you are looking for a longer adventure in the wilderness, look at spending a few days in Cape Breton, driving and camping the Cabot Trail. 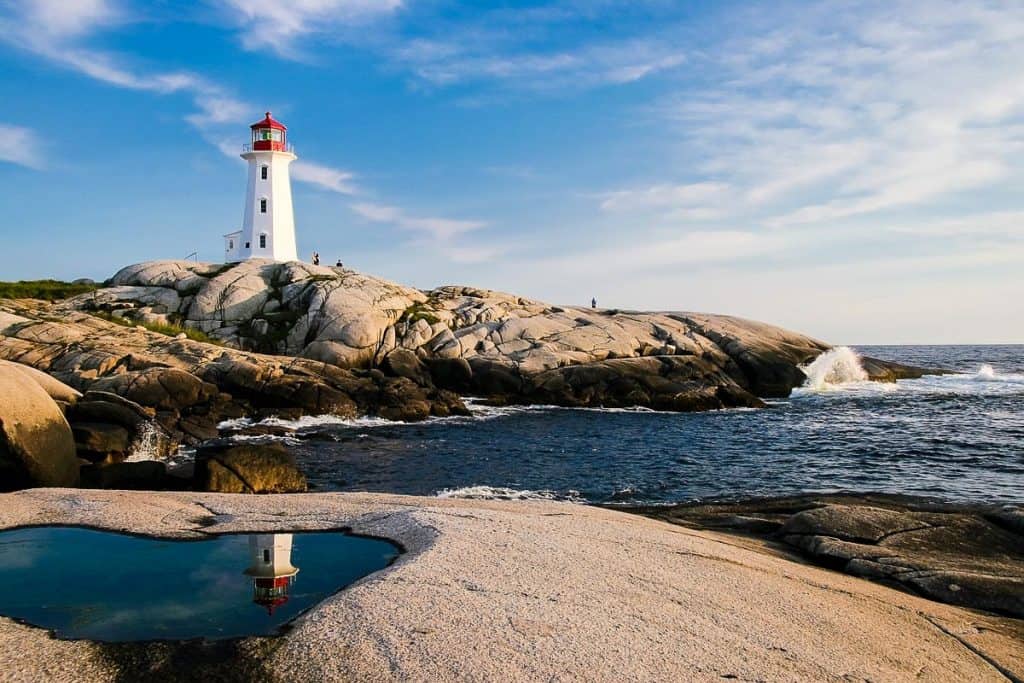 Halifax is such a fun and interesting city that doesn’t seem to be on many people’s radars. Even some Canadians don’t seem to know too much about it, but Halifax is one of our favorite cities we’ve ever been to! Whether you have just a weekend in Halifax, or a little longer to see the sights, it’s a definite must-visit! 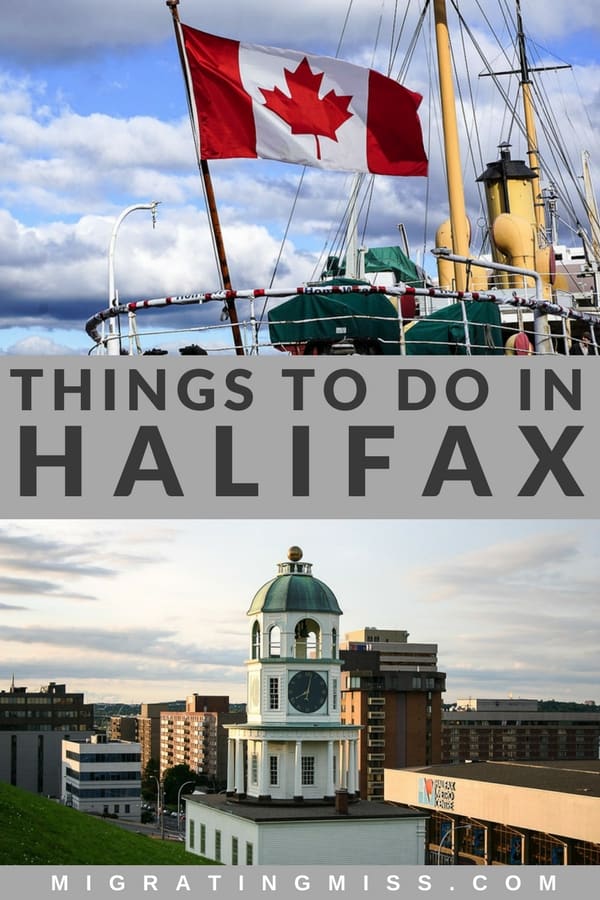 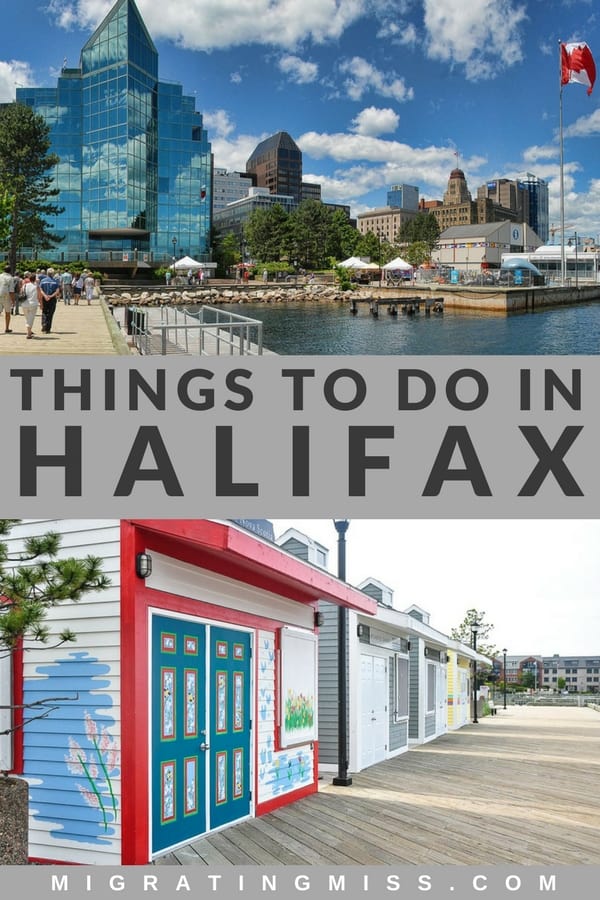 8 thoughts on “Things to Do in Halifax, Nova Scotia”