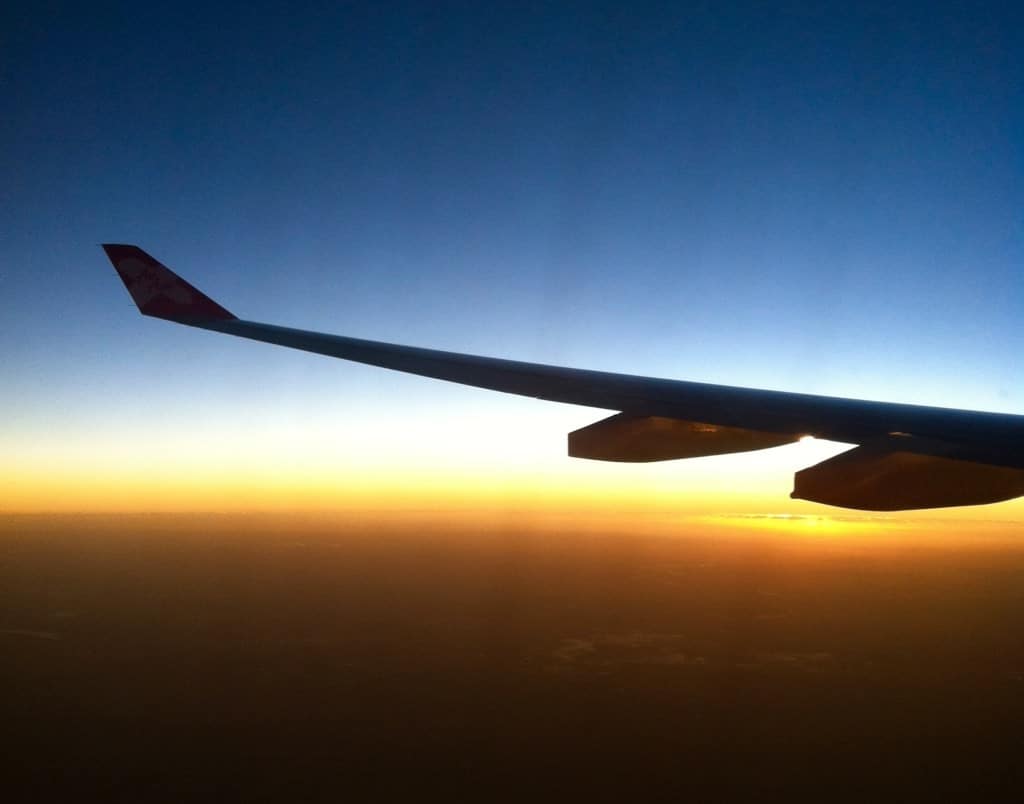 If you’re reading this, chances are you’re thinking of moving abroad, or at least travelling. Or maybe it’s never crossed your mind and you’re curious about why suddenly travel and living abroad have exploded all over the internet. Is travelling the new norm? I’m not sure, but I do know it’s one of the best decisions you can make in your life.

Just because it’s popular right now doesn’t mean you shouldn’t do it. Travelling and living abroad isn’t for everyone, although you shouldn’t be afraid to do it. Plus it’s something you’re thinking about and it’s right for you then you should do it now.

Because all those things you think are stopping you are not really. It’s you that’s stopping you. If you really want to make it happen then you can. One of my favourite quotes is:

There will always be an excuse, and you have to decide if that excuse is worth holding you back.

So what’s your excuse?

I don’t have enough money

This is a big one. I’m aware that there are people in the world who can truly only dream of travelling and living abroad and I’m intensely aware of how privileged I am to be in a position to do so. Sometimes so much that I feel guilty about it. But if you’ve thought about travelling or living abroad seriously, then chances are there are ways for you to make it happen.

All those posts about how people saved thousands of dollars to pursue their travel dreams aren’t about them winning the lottery, or coming into an inheritance, they’re about dedication, hard work, and sacrifice. I lived on a fold out couch in the corner of my parents lounge for 10 months so I could afford to backpack South East Asia and move to the UK. Is that a 24 year olds dream life? No. Not the fold out couch at the parents part anyway. I stopped buying new clothes to the point where spending $10 on something would make my heart beat faster, and I stopped buying lunch because when you add up what that costs in a week it’s crazy. Everything I did was measured against whether it would extend how long I needed to stay in Australia.

So if money is your issue, take a good look at your finances and see where you can make some sacrifices. I guarantee there is somewhere!

The other option is to be smarter about the way you move abroad. Move to a job, rather than trying to find one when you get there. If English is your native language look at teaching English to start with, otherwise you can look at HelpX or Workaway to meet people and try and find some opportunities when you arrive somewhere new. It definitely takes the pressure off!

No one will go with me

So? Solo travel is the new norm. I was surprised when I first travelled to Vietnam with a  friend and almost everyone I met was travelling solo and had made friends there. We were one of few groups who knew each other before! South East Asia is a solo travellers dream. If you’re moving abroad and really afraid to do it alone then the first option is to move to somewhere you already know someone. If that’s not possible, then you have to make the whether to go alone, and the answer is yes.

If you’re super concerned, choose somewhere with an expat community. I wouldn’t recommend just sticking with expats once you get there but somewhere that is a bit more set up for expats or used to them will be easier on you, and you can find some instant support. For example, if you’re a Kiwi or Aussie moving to London you can guarantee before your first day is out you’ll have tripped over a dozen other Kiwis or Aussies, or people who tell you their friend is one.

If you don’t know where to go, check out the Best Expat Cities, or How To Choose a Country to Move to.

I’ll miss my family and friends

This is true, and the reality is that sometimes it’s really hard to be abroad when you’re missing the milestones and life changing events of the people close to you. On a day to day basis though it is SO easy to stay in touch. Sometimes I speak more to people in other countries than I do to my friends where I live! Skype, Whatsapp and Facebook have made the world a smaller place.

The consolation for those moments when you miss something is the connections you’ll make where you move or travel, and how this will enrich your life even more.

So why do you need to make this move now?

Visas are easier to get when you’re younger

If you’re under 30 there are a ton of working holiday visa opportunities to explore. Many countries have the option for you to go and live and work there for one year (sometimes two) if you fit their criteria, which is usually to be a passport holder from a country they accept, have some financial backing and be under a certain age limit. If you’re thinking bout moving to the UK check out how to apply for a working holiday visa for the UK.

It’s easier to make friends when you’re younger too. People have less commitments, including you, which makes it easier to go out, do things, and make new connections. Moving abroad with children is far from impossible, but it does mean that you will most likely have less free time to make connections and settle in to life in your new country. When you just have yourself to worry about you can go out, do whatever you like, or make changes if things aren’t working out. Maybe the city you chose isn’t quite right, or you secure a job elsewhere, so you move to another place. Much easier to do when you don’t have anyone else to consider!

Speak to most people who travel and they’ll tell you they have a problem. They’ve become addicted to exploring and choosing the adventure. Sometimes travel seems like it gets harder the longer you do it. But it’s not such a bad addiction to have, unless you get to the point where it becomes a lot harder to feed. If you want to live abroad and you’re over the age of the working holiday visas or they are not open to your nationality it doesn’t mean it’s impossible to move abroad, it’s just harder. Chances are you’ll need to be a skilled worker and secure a job first.

You should move abroad now because if you like it and you want to stay, it’s easier when you’re younger, or if you want to keep living abroad then you can hop from country to country picking up their working holiday visas. If you leave it until later, this may not be an option for you.

If the thought to live abroad or travel long term has crossed your mind, don’t ignore it. Sometimes you just need to look further into it and if you start working toward making it happen it will fall in to place, but not without some commitment and hard work from you. But seriously, if it’s crossed your mind, then you should do it. As much as travel has sometimes made my life harder, overall it’s the best thing I’ve ever done. And I’m not the only one.

Are you thinking about moving abroad? What’s stopping you? 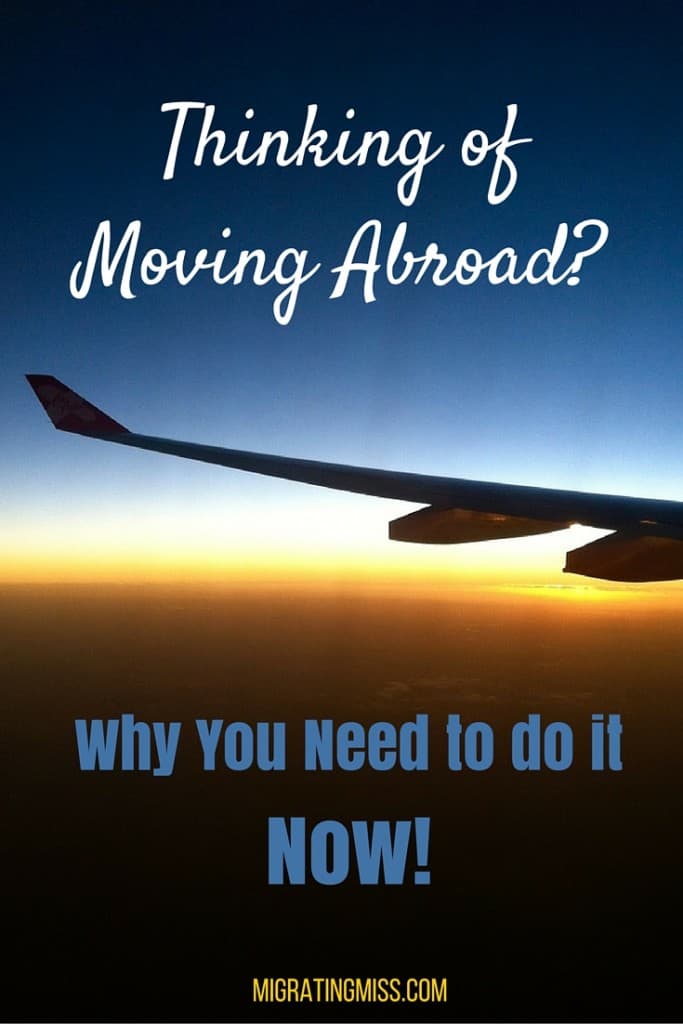 4 thoughts on “Thinking of Moving Abroad? Why You Need to Do it Now!”