Skip to content
This post may contain affiliate links that I earn a small commission from at no cost to you. Please see my disclosure page for information. Please check for current circumstances before travelling.
I’ve written before about how Almería, a city in the southeast of Spain, is seriously underrated as an Andalusian destination. Before I moved there to teach english I had never heard of Almería city or the area beyond. There’s at least 10 awesome things to do in Almería, but what about outside the city? Most people that come to this area of Spain to make use of Almería airport and speed off to resort style places along the coast. Visiting beautiful beaches is one option, but there is so much else to see and do near Almería. Here’s my top 5, in no particular order.

While living in Almería I was constantly asked if I had visited Cabo de Gata yet. When I finally went, I wondered what had taken me so long. Cabo de Gata is home to some of the best beaches in Spain, and luckily they’re still somewhat unknown. Playa de Los Muertos and Playa Monsul are just some of the top beaches in Cabo de Gata, and there are many more that are beautiful and worth visiting besides.

Away from the beaches in places like Níjar, often called one of the most beautiful villages in Spain, you can find traditional white houses and handicrafts. Rodalquilar was a gold mining area and there are abandoned miners villages just waiting to be explored! 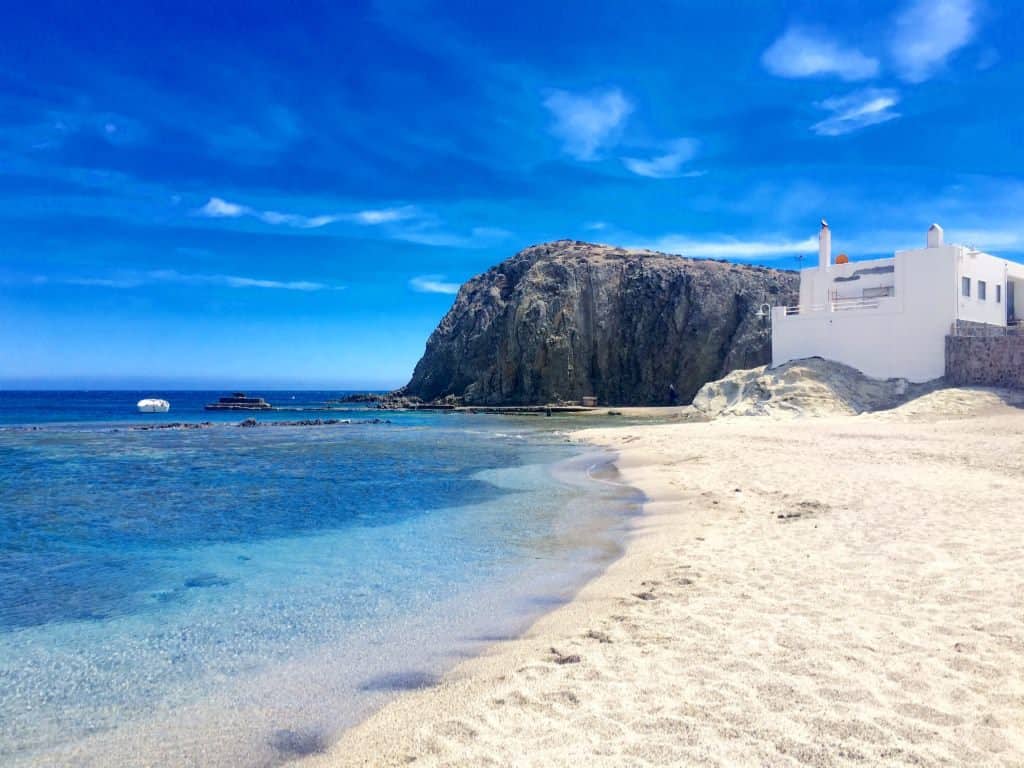 The Alpujarras are villages dotted along the southern side of the Sierra Nevada. While the Aplujarras in Granada might be more famous, the villages in Almería are certainly worth a visit.

There’s a wealth of history and traditional arts in these small white villages. They typically take the same form, with a central plaza and some kind of church or encircles by white houses and buildings. Against the backdrop of the Sierra Nevada they make for very pretty viewing indeed.

The further and higher you drive from Almería the more isolated the villages become. This is a traditional agriculture area and you’ll be able to sample the famous Jamon Serrano (ham) that is cured in the mountain air, drink the tasty local wines and consume an abundance of other produce like olives, figs, almonds, lemons, oranges…you get the idea! 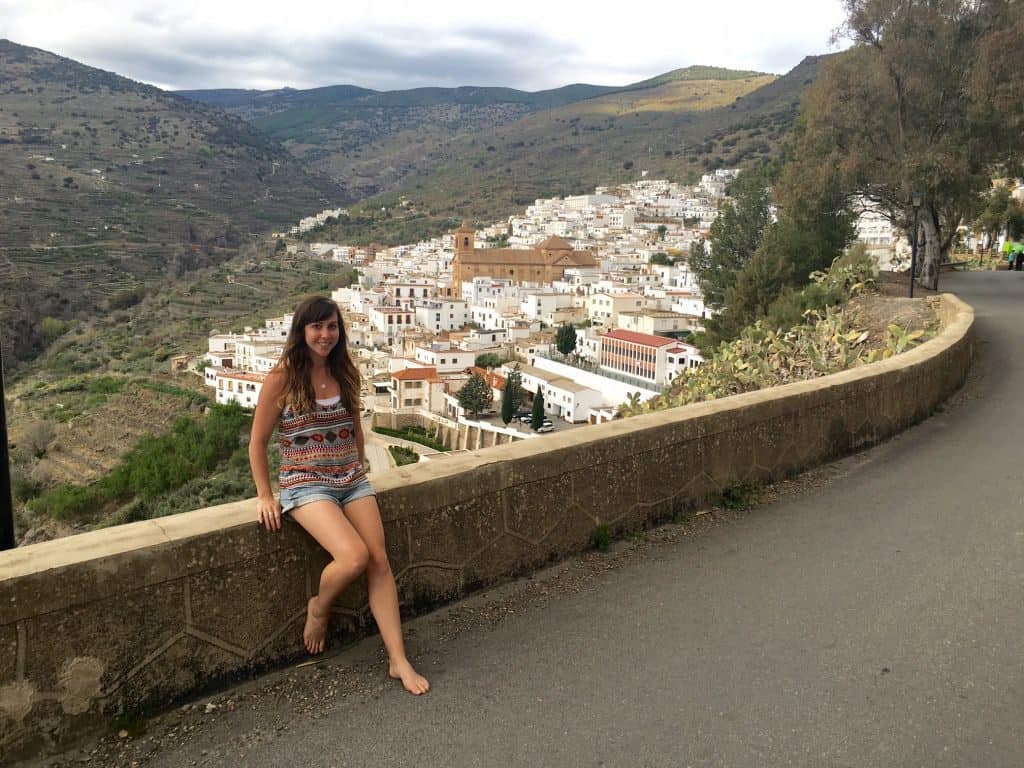 From Almería you can visit both the Tabernas village and the Tabernas Desert. Both have been used in more films than you probably even know over the years, and most recently as Game of Thrones filming locations.

In Tabernas itself you can visit the old ruins of a Moorish castle, grab some traditional Spanish food to eat and visit a couple of film locations.

Outside Almería and closer to the Tabernas Desert, the only desert in Europe, you’re treated to landscape that is so out of this world it’s been used in all kinds of films as lunar landscape, or as a substitute for the wild wild west of the USA. It was cheaper and easier for Hollywood to make films here, and the remnants of the period when spaghetti westerns were immensely popular can still be seen. You can visit the old (and still sometimes used) film sets at Fort Bravo, Western Leone and Mini Hollywood, the most famous given it was where Clint Eastwood filmed his movies. 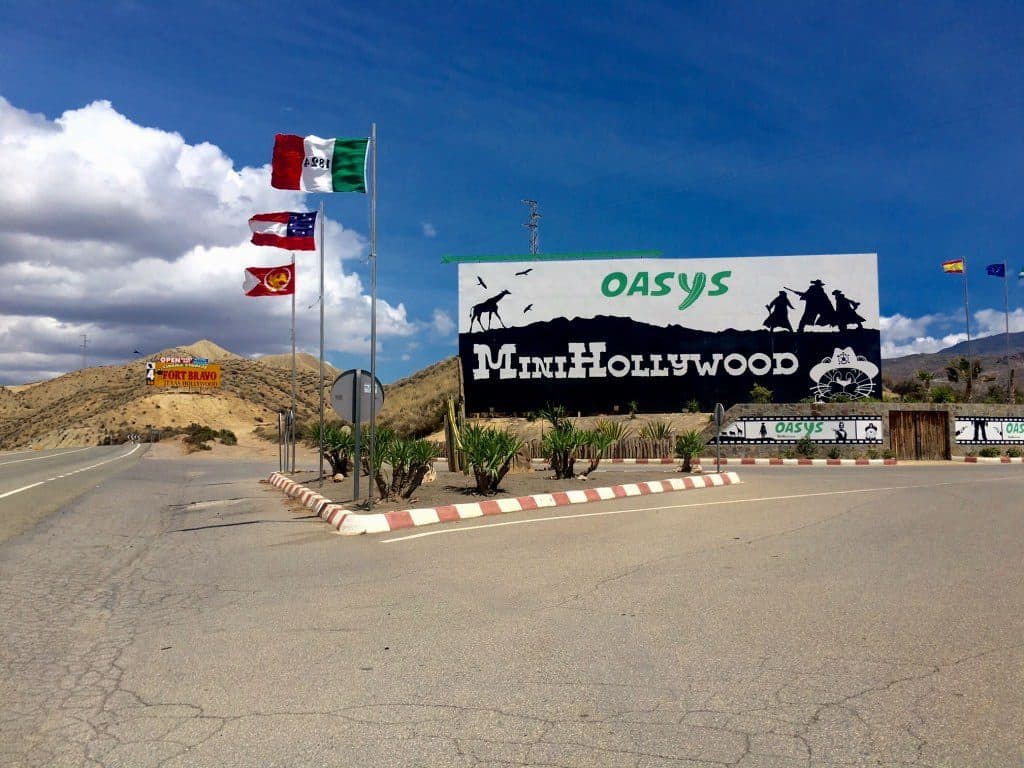 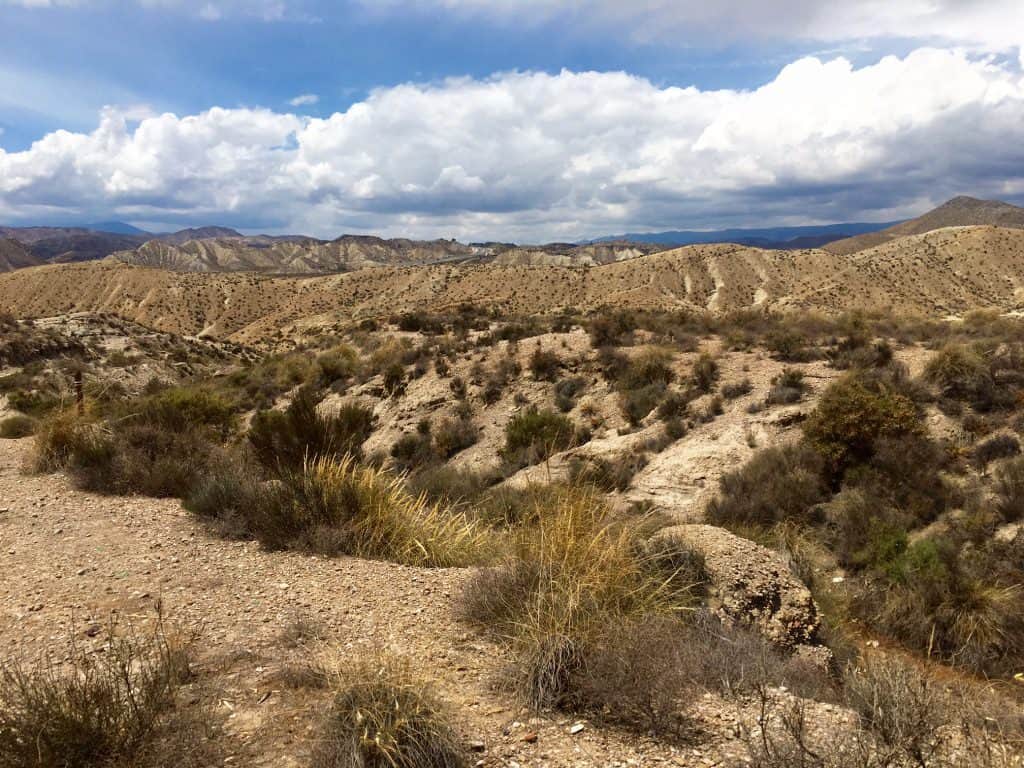 Mojacar, sometimes called mini Ibiza, is just north of Cabo de Gata-Níjar Natural Park but well within driving distance of Almería. Don’t let the party reputation put you off if it’s not your thing, because the beautiful village of Mojacar perched on a hill has something for everyone. Down near the sea you can party in clubs on the beachfront, which are very popular in the summer months. If you’re more interested in food and traditional Spain then the village of Mojacar above has whitewashed houses and tiny lanes lined with flowers.

Admittedly it is a highly touristy area, probably the most visited place by tourists in Almería. There’s always a reason for a place being popular so don’t let that put you off, and those looking to get off the beaten path of southern Spain shouldn’t shun a visit to this gorgeous area. It’s still much less visited than some other areas of the Spanish coast, and it makes a great base for exploring Cabo de Gata, or lesser known places nearby. If you’re short on time then I’d still recommend a quick stop and a lunch with this stunning view. 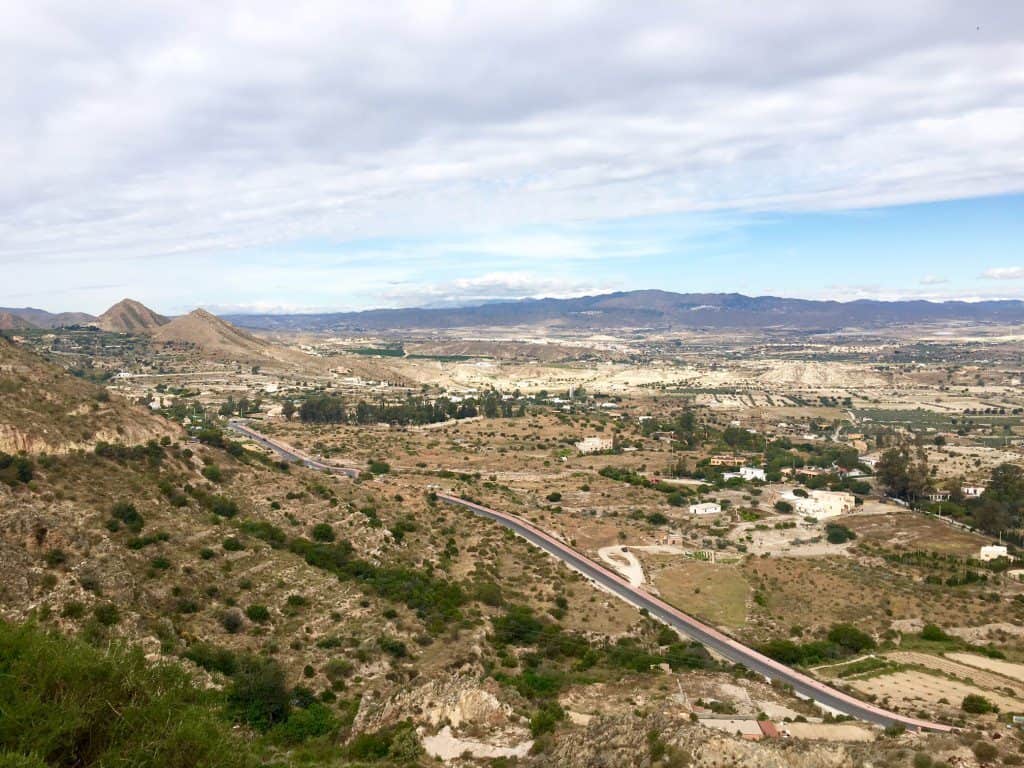 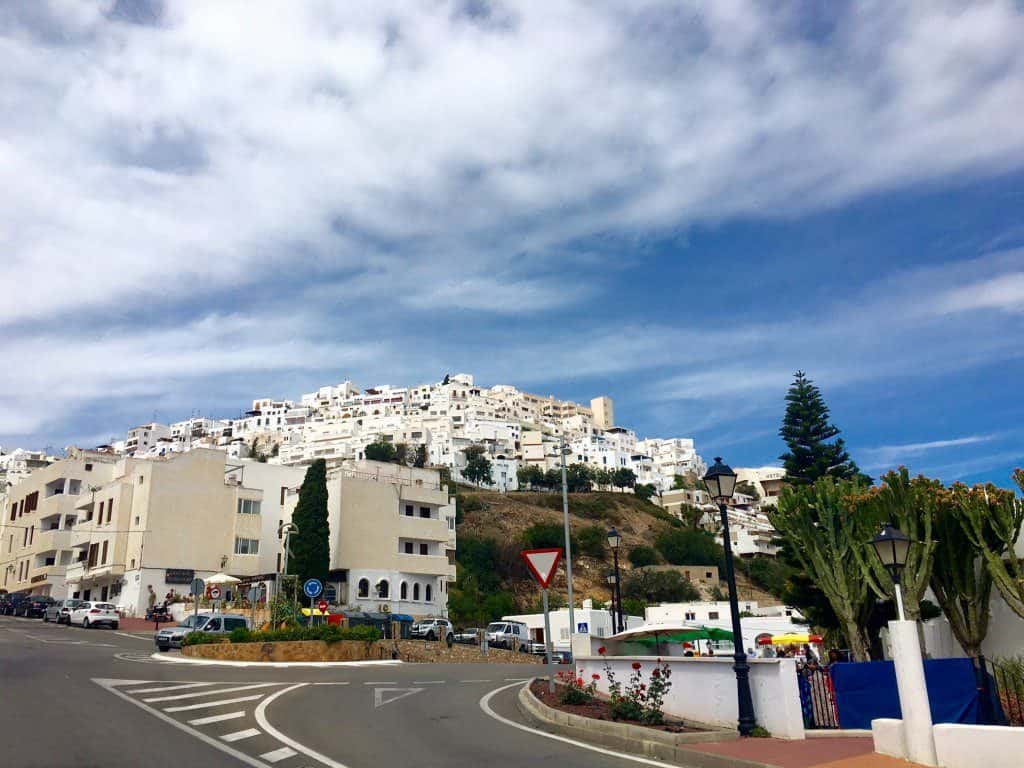 Sorbas is an impressive village to say the least. The houses seem to balance precariously on the edge a ravine, and driving through means starting at the top and going just one way down. It’s similar to the more well-known village of Ronda in Malaga, but much less crowded.

Located near Sorbas are some of the most important karst formations and caves in Europe. It’s a good idea to take a guided tour of the Sorbas caves, and you can book this from the tourist information centre in Sorbas itself.

Sorbas is also well-known for it’s ceramic arts and there are studios in the Alfafería neighbourhood making ceramic pieces in the traditional way.

Unfortunately public transport isn’t too helpful in this area and most of the journeys will require a car, or at least are better with a car so that you can come and go as you please. 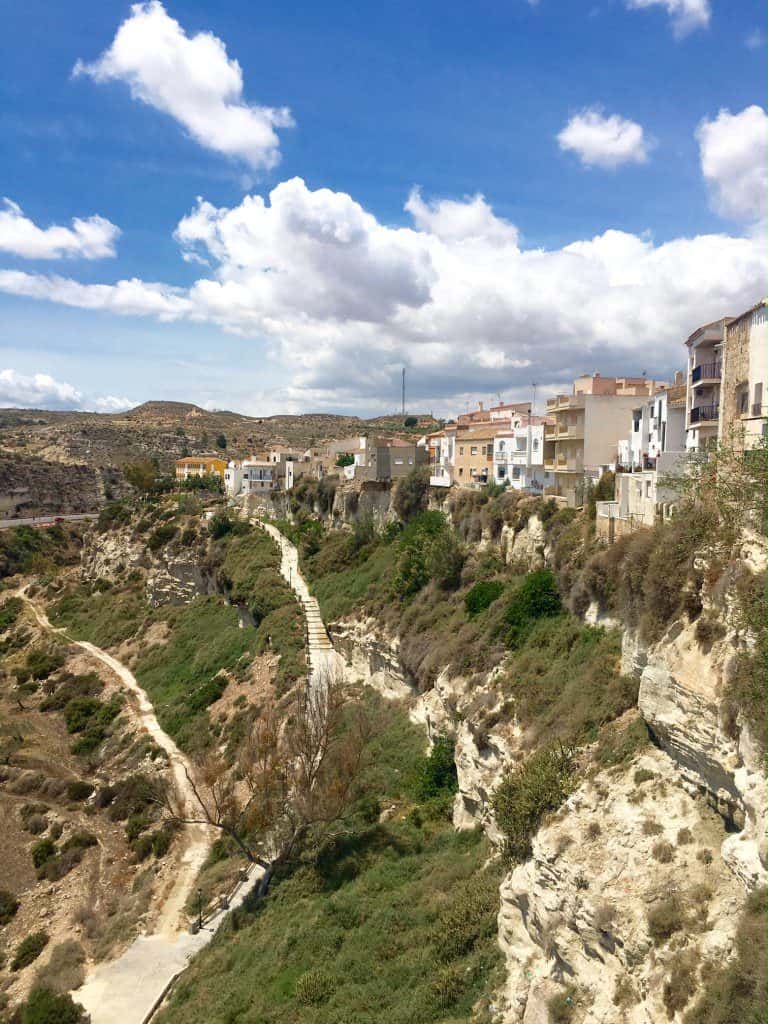 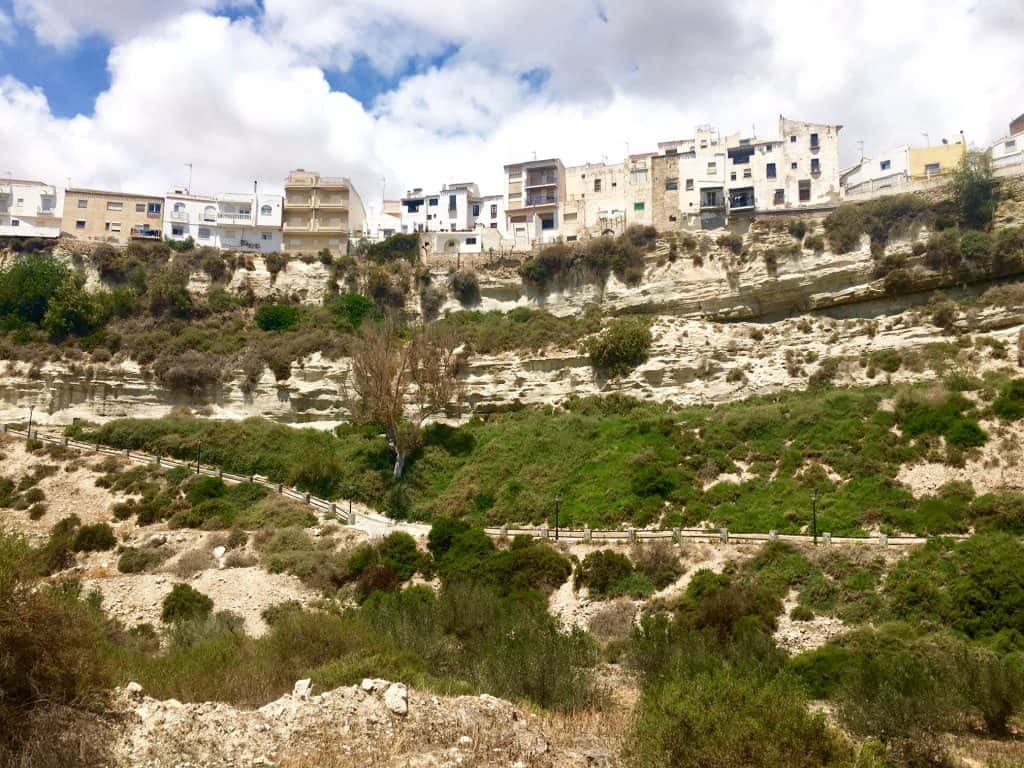 So these are my top places to visit outside of Almería. The only question is, what are you waiting for?

Have you visited Almería or any of these places? Would you agree or recommend anything else? 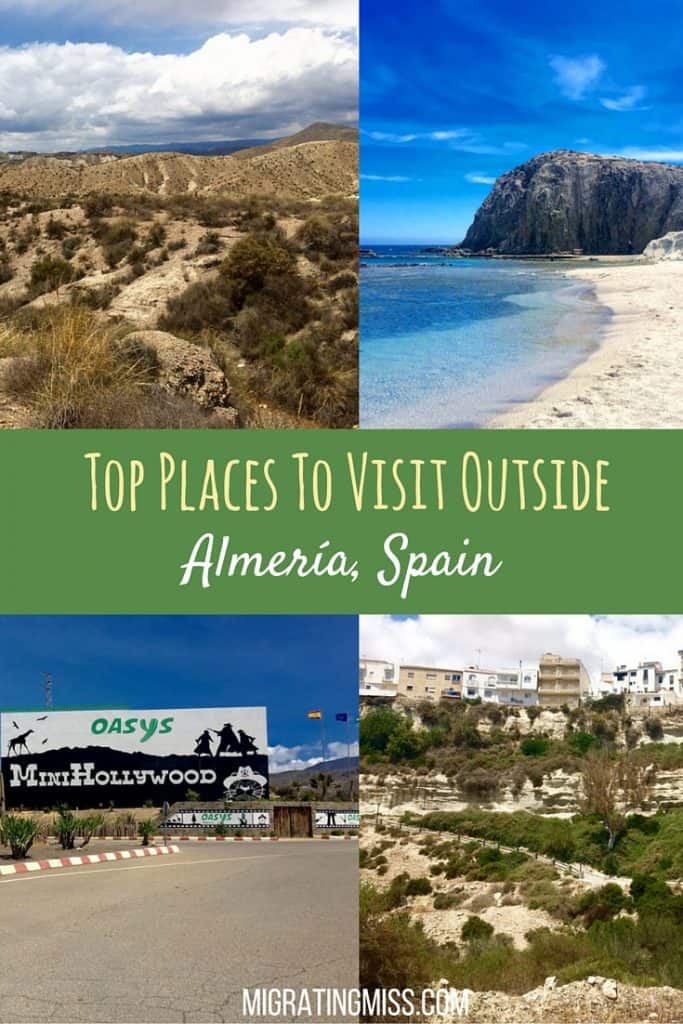 2 thoughts on “Top 5 Places to Visit Outside Almería”