I don’t think I can express in words my EXCITEMENT at arriving in Bath, England. I’m not even sure it was entirely rational to be so happy to be in a city, just because an author whose books I like lived here over 200 years ago.

But as someone as who has read all of Jane Austen’s novels – and (confession) numerous other historical and regency romances – going to Bath, a destination that features so prominently in these historical romances was a definite dream come true.

“Oh, who could ever be tired of Bath?” – Caroline Morland, Northanger Abbey 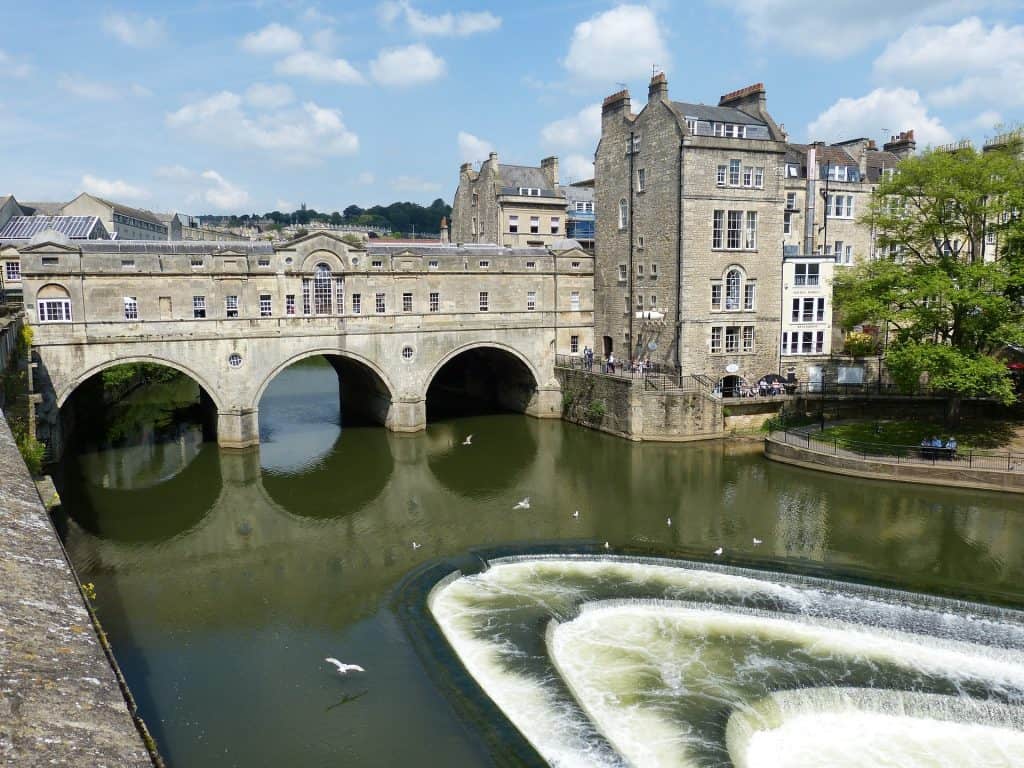 Bath is a small city in the southwest of England, mostly known for the Georgian buildings that sprung up when the city became a destination spa town. Word got out that the thermal waters around Bath could be restorative and visitors poured in to try and take advantage of the supposed health benefits. As a result, Bath became a premier social destination in the early 1800s particularly, centered around the Grand Pump Room where the waters could be drunk, and the attached Roman Baths. The city was given World Heritage Status in 1987 and I would say it’s one of the best and most accessible UNESCO World Heritage Sites in the UK.

So what has Jane Austen got to do with Bath?

Jane Austen lived in Bath from 1801-1806 with her family, who had followed the fashion of the time in moving to Bath for the supposed health benefits. She first visited the city in the late 1700s, when it would have been an exciting place for a young lady from the country. One of her novels, Northanger Abbey, was written after this visit and revised while she was living in Bath. The central character, Catherine, is enamored with the delights of city living, much like Jane might have initially been.

However, it’s widely accepted that Jane Austen wasn’t entirely in love with Bath, and in fact, may have grown to quite dislike the city. Jane was ahead of her time, refusing to marry for status or money, something that young women were expected to strive for at that time. She seemed to want to avoid the games of society at the time, and indeed, even called them out on some of their ridiculousness in her novels.

In her later novel, Persuasion, written ten years after she left Bath, the protagonist Anne Elliot arrives in Bath reluctantly, and the glorious parties and high society life seem to hold little appeal for her, in the same way the thrill of society life in Bath may have dulled for Jane Austen.

So if Jane Austen didn’t particularly like Bath, what is the point in visiting? Well, Bath is still a beautiful city, and it wasn’t this aspect that Jane didn’t appear to like, but more the society life during her time there. Visiting Bath gives you the opportunity to step into the world where Jane lived for part of her life, and see Bath as Jane Austen knew it. From that, you can form your own opinion of Bath by enjoying the delights of the city as it is now and taking advantage of the window it provides into English history.

Plus, it’s fun to visit places that feature in a lot of novels and movies! Even if you’re not in love with Jane Austenesque (I’ve now made that a word) literature, exploring the top things to do in Bath is still a great adventure. 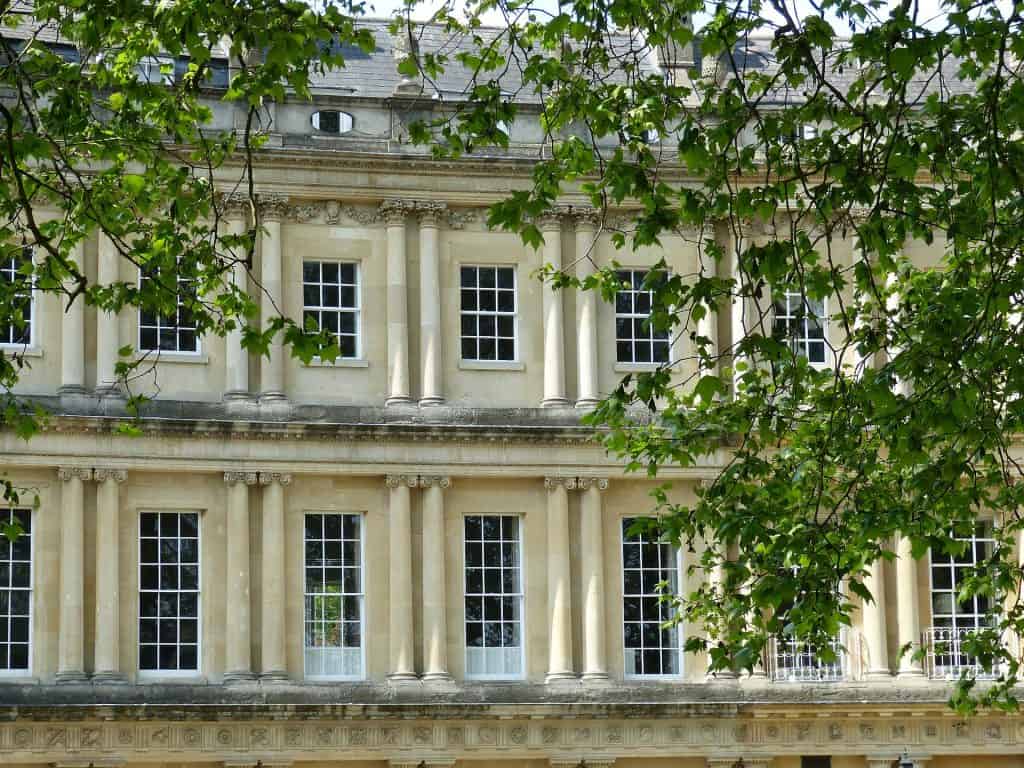 Based in the building that was once the center of social life for high society in Bath, this grand room is now a restaurant open for at least two meals a day, and an afternoon tea that will really get you in the spirit of Jane Austen’s Bath. It’s a must visit after reading the descriptions of the residents of Bath promenading around the room whilst they “take the waters” to try and benefit their health.

Persuasion is my favourite Jane Austen book, so I couldn’t miss visiting the place the fictional Anne Elliot spent so much time in, and where Jane Austen herself would have socialised.

My cousin and I went for breakfast at the Pump Room and enjoyed the accompanying music of the Pump Room Trio, who play throughout the year, while I totally geeked out over the whole experience. You can also visit the attached Roman Baths, a public bathing site preserved since Roman times.

If you visit the Pump Room for afternoon tea or any other meal, don’t be afraid to ask the staff if you can try the famed water of Bath. They’ll bring over a small glass for you! Although it smells like sulfur and I wouldn’t say it’s my favourite drink ever… 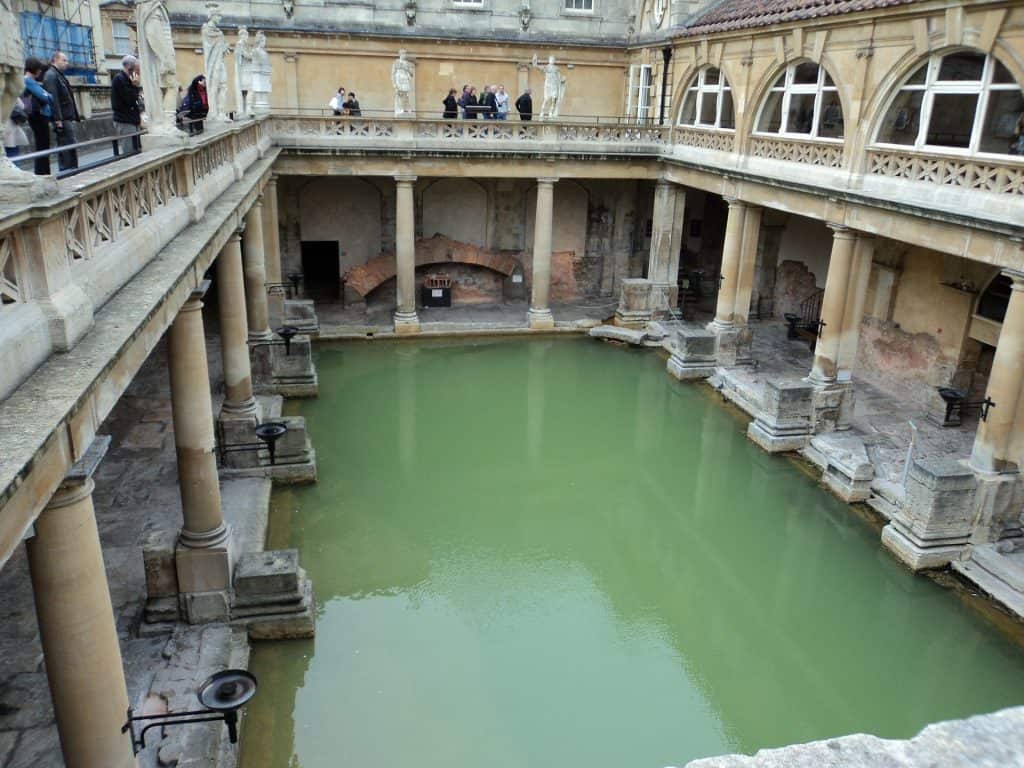 The Jane Austen Centre is a small museum located on Gay Street, nearby but not in, one of the houses that Jane Austen lived in when she came to Bath as a young woman. The staff are all dressed in period costume and they do an amazing job of imparting information about Jane and her family and showing you around the exhibition, while also leaving you to see what you would like at your own pace. This is a great place to start if you don’t know much about Jane Austen or her time living in Bath.

No one knows exactly what Jane Austen looked like, but based on forensic evidence, a waxwork of what Jane may have looked like is on display, which I thought was pretty cool. It was also interesting to learn more about Jane’s writing, as it was pretty much unheard of for a woman to be a writer in her time!

Entry to the Jane Austen Centre is £11 for Adults and there are tea rooms as well, although I didn’t try these ones given there so many to choose from around the city. 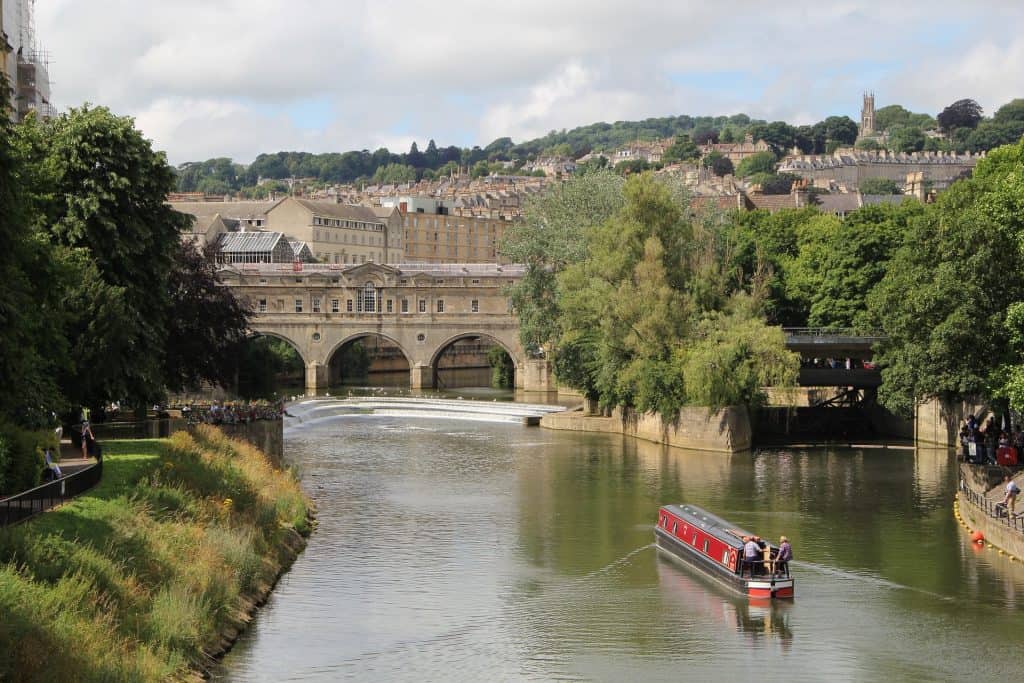 The Royal Crescent has 30 terraced houses laid out in a crescent shape, with a stone facade unchanged since it was built over 230 years ago. The Royal Crescent Hotel occupies the central house, sadly out of my backpacker budget. Number 1 is redecorated to resemble what a Georgian Town House would have looked like, and available to visit.

If you’re obsessed with Jane Austen like me, you may or may not have seen the 2007 made for TV movie version of Persuasion. At the end, Anne Elliot is shown breathlessly running through what seems like the never-ending circular streets of Bath. Despite this not being exactly what happens in the book, walking this street was a bit surreal. It’s like no other street I’ve ever seen that’s for sure! 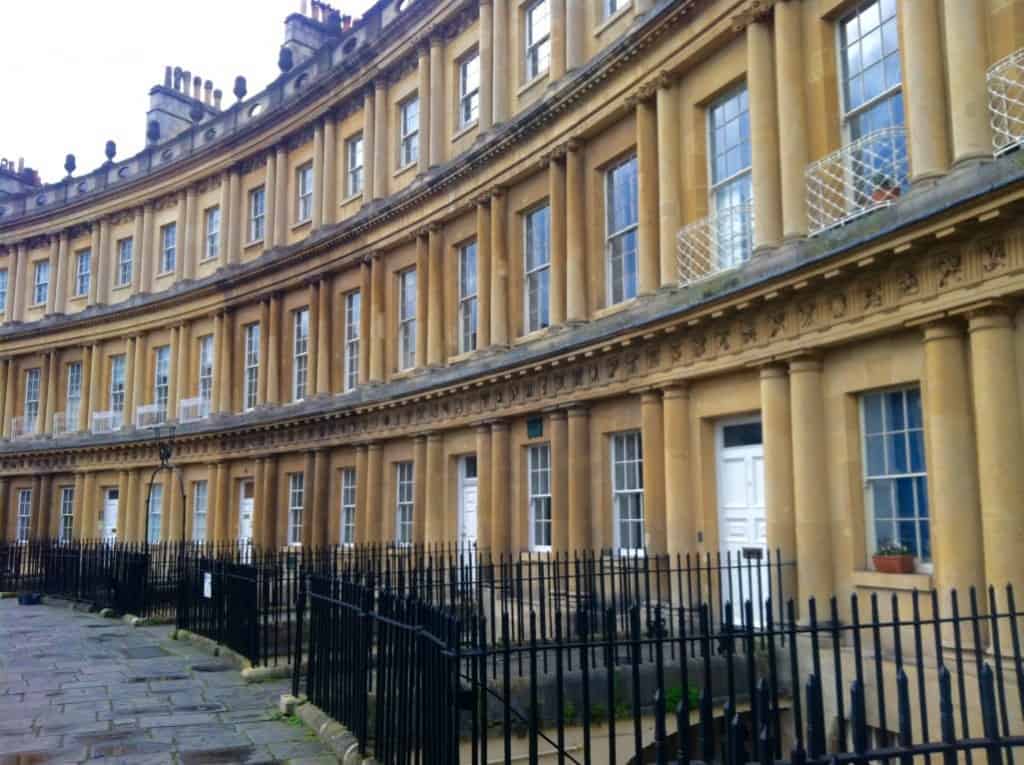 We well as living in Gay Street, Jane Austen spent some of her time in Bath living at 4 Sydney Place. The house is slightly out of the city centre (near the Pulteney Bridge, a Bath must see all on its own) and is identified by the plaque outside. The house has been split up and is now known as Jane Austen’s Apartments, and is a favourite place to stay in Bath for Jane Austen lovers.

The Assembly Rooms in Bath were another centre of social life in Jane Austen’s era. For those unfamiliar with Regency life, the Assembly Rooms were a gathering place where many a young woman was supposed to find her husband.

In Bath, it’s an easy walk from the Pump Room up past Queens Square to The Circus, detouring to the Assembly Rooms before carrying on to the Royal Crescent. As I walked these streets I couldn’t help but think of how they would have been in Jane’s day, horses and carriages everywhere, streets bustling with men and women in the dress of the time, both servants trying to get work done and high society wanting to be seen.

Don’t miss the free fashion museum under the Assembly Rooms, showing all sorts of clothing from the 1600s until now. That’ll help with imagining Bath in Jane Austen’s time!

What else is there to do in Bath?

When you’re sick of tracing Jane Austen’s footsteps (is that possible?) there are other sites to see in Bath.

Bath Abbey – One of the most visited sites in south west England. The site of Bath Abbey has been occupied by three churches since 757 AD. The current Abbey has changed extensively over time and would have looked very different even in Jane Austen’s time in Bath. Bath Abbey is easy to find located next to the Roman Baths (and an awesome fudge shop).

Pulteney Bridge – This bridge that spans the Avon River was completed in 1774. It’s one of the most famous images of Bath, overlooking a water feature and with shops spanning both sides.

Sally Lunn’s House – Touted as the oldest house in Bath, built around 1483, and home of the original Sally Lunn Bun, a kind of large teacake. A variation of the Sally Lunn bun is sold in most supermarkets in New Zealand and I grew up having it in school lunches, making this a novel place for my cousin and me to visit! 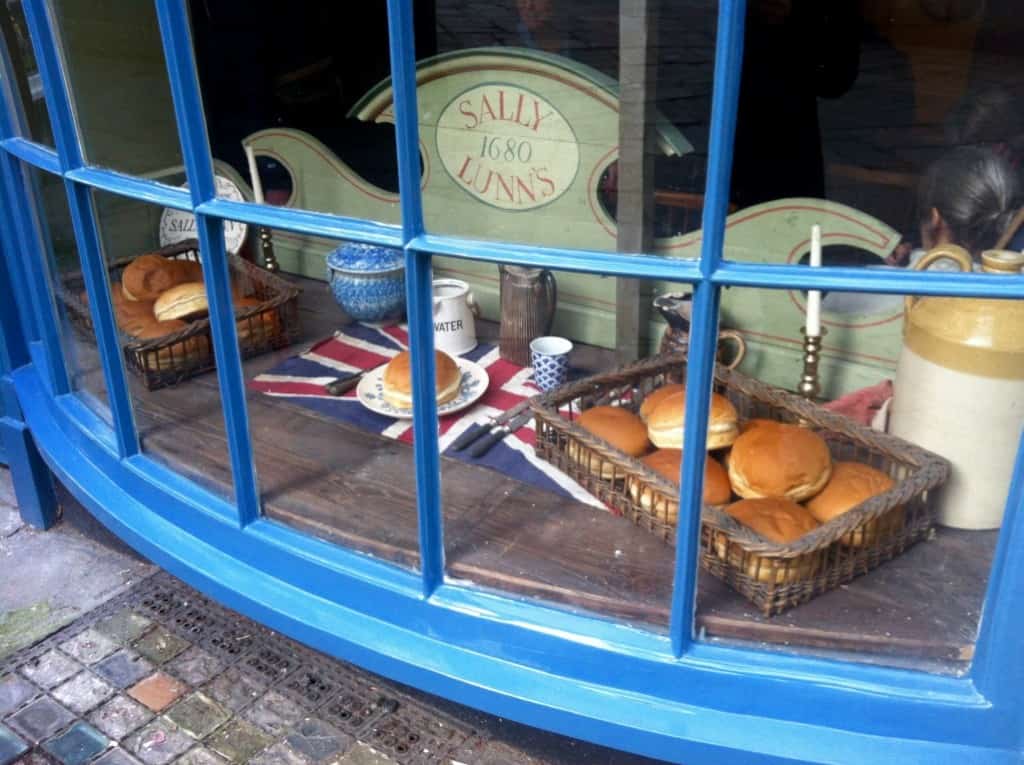 Where to stay in Bath?

Bath has accommodation options for every budget, from luxury hotels and apartments to hostels. We stayed at the YHA Bath, a hostel a slightly out of the town centre but still within walking distance and a really lovely place. There are some backpackers hostels that are more central but we had a car to park which can be difficult to do in the city.

I previously mentioned both the Royal Crescent Hotel and Jane Austen’s old house, which are higher range options, and there’s also some great quirky boutique hotels in Bath too. Bath definitely isn’t short on accommodation and a little bit of searching will reveal something to everyone’s taste and budget. 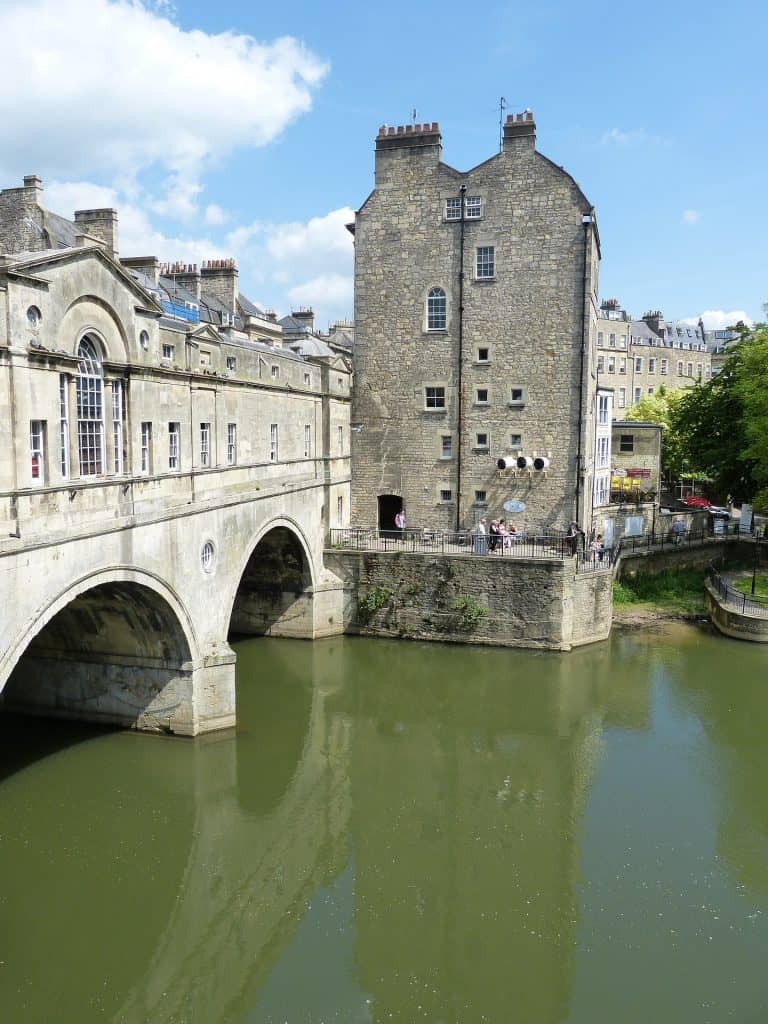 Where to go from Bath?

Bath is located in Somerset, in south west England. It’s close enough to be included on day trips from London, including those that visit Stonehenge on the way there or back. I arrived in Bath by train from Cardiff which wasn’t far away, from here we had a car and drove around the Cotswolds. This corner of England has so many great things to see!

I arrived in Bath by train from Cardiff which also wasn’t far away so makes a great place to visit Bath from, or to continue on to after a trip to Bath. We had a car so we drove around the Cotswolds from Bath, another gorgeous area and top place to see in England. 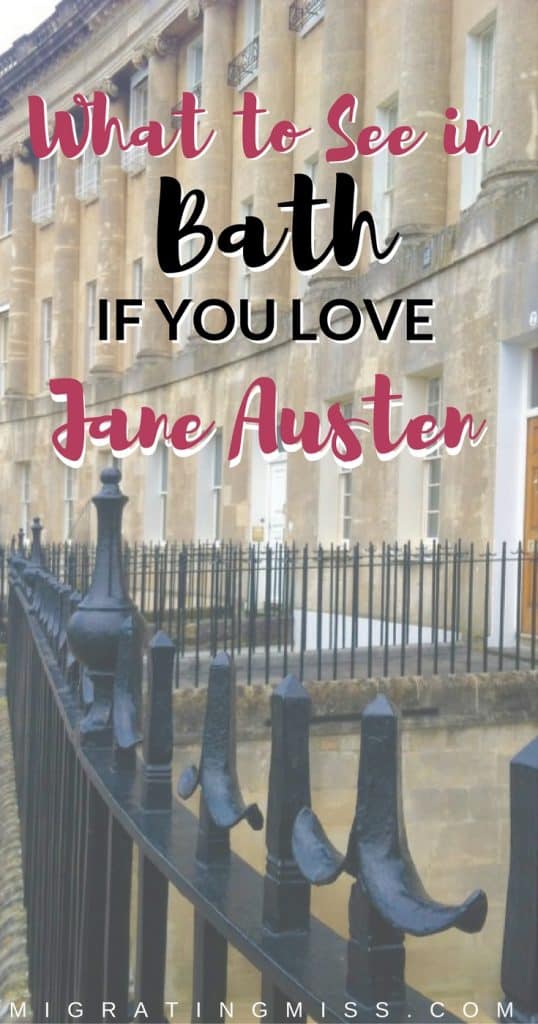 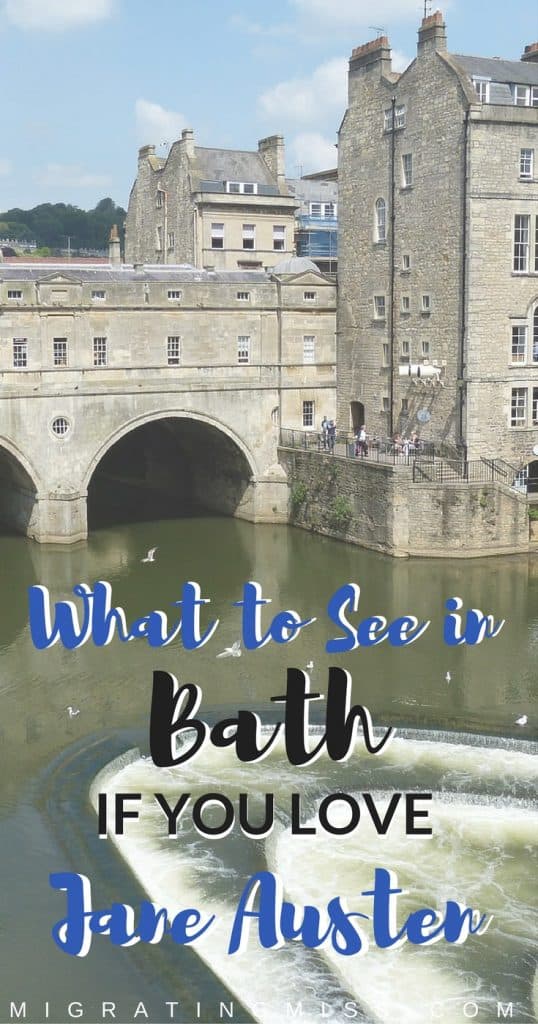