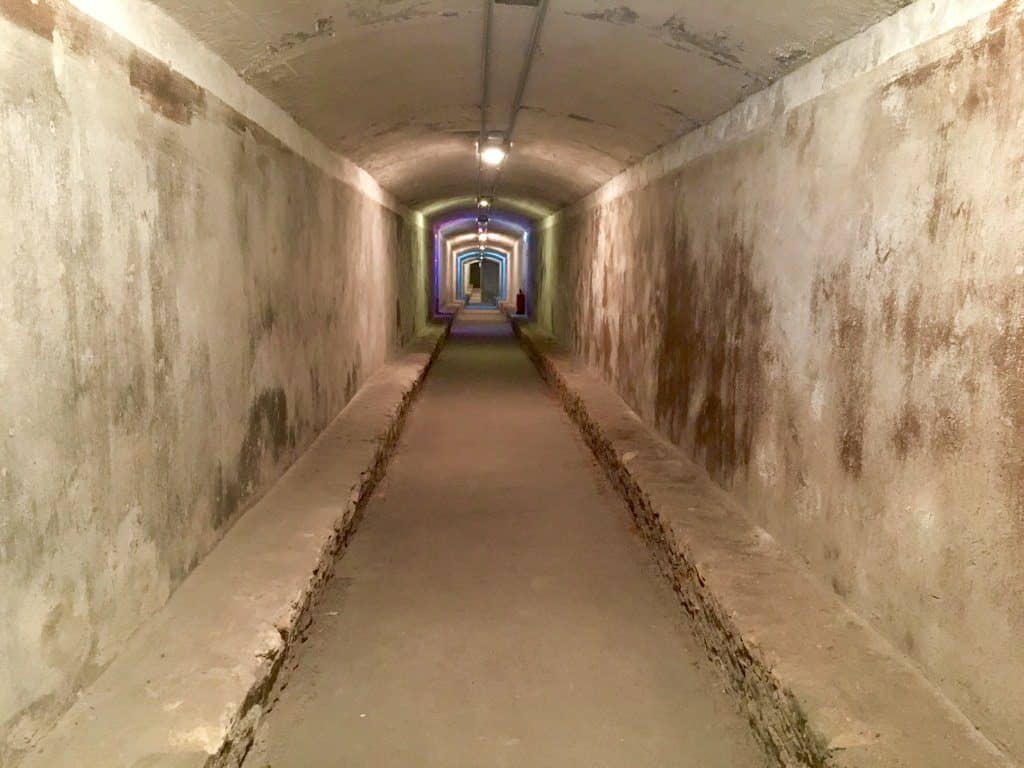 During my first class as an English teacher in Almeria, the students practiced speaking English by telling me the best things to do, and they mentioned making a visit to Los Refugios de Guerra Civil. I’m a sucker for visiting anything historical and war-related, no idea why, so I really wanted to go and see these civil war shelters of Almería.

I’ve been constantly fascinated by the amount of history and unique things to do in Almeria. This part of Andalucia doesn’t seem to get as many visitors as the rest, and I love exploring and being able to show people what they’re missing!

Los Refugios Almeria seems to always have tourists, but mainly from the rest of Spain. So I’ve decided to share what I’ve learned from visiting the civil war air raid shelters in Almeria, not least because hardly anyone seems to know about them outside of here. Unfortunately, there’s not a lot of information in English about Los Refugios in Almeria, so I decided it was time to change that, and I’ve put together this info for visitors to Almeria who want to go to Los Refugios de Guerra Civil.

What are Los Refugios in Almeria?

Under the city of Almeria there are 4km of tunnels, or air raid shelters, that were used to shelter the residents of Almeria during the Spanish Civil War. The city was bombed at least 52 times by hundreds of bombs, and the tunnels were meant to shelter 90% of the cities 52,000 people at the time. The rest of the citizens of Almeria would be able to find shelter in nearby caves or private basements.

During the construction of a carpark in 2001, the shelters were “rediscovered”. While older residents surely knew of their existence, they were never talked about. The ancient remains of Puerta Pechina, the gateway to the walled city, were also discovered. The renovation of the tunnels to allow visitors took until December 2006, when they were opened to the public.

What were Los Refugios like for the people of Almeria during the Spanish Civil War?

Entrances to the shelters were built all over the Almeria in private homes and to show a connection people would leave a black flag outside their door saying SHELTER. The very wealthy had their own private entrances and sometimes private spaces within the shelters.

Within the shelters, there were rules, including one that forbid the discussion of politics or religion. No smoking was allowed and children were not supposed to be left on their own.

If you visit the Refugios Almería tunnels you’ll notice the barriers you need to walk around, set in a jigsaw fashion along the tunnel near the entrance. This was to prevent the waves of a bomb blast from spreading through the tunnels.

In the ceiling, you can see small holes where the original lighting wires were strung up. 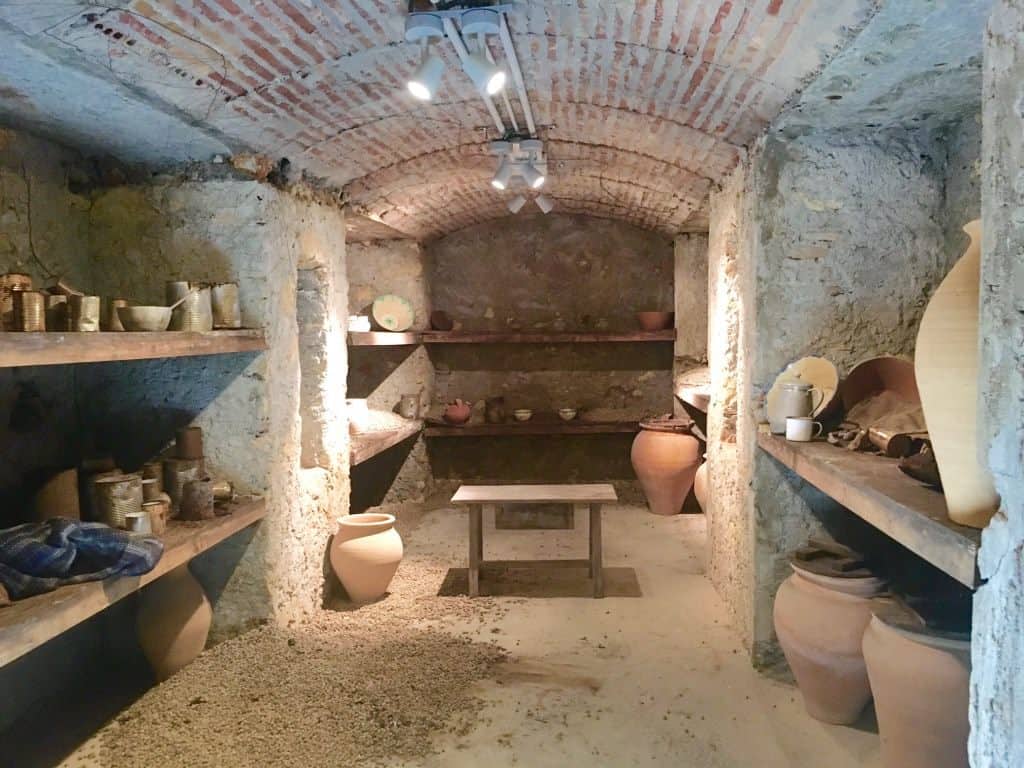 There are children’s drawings of planes and the stories of bombings scratched into the wall, along with the name of one of the builders. 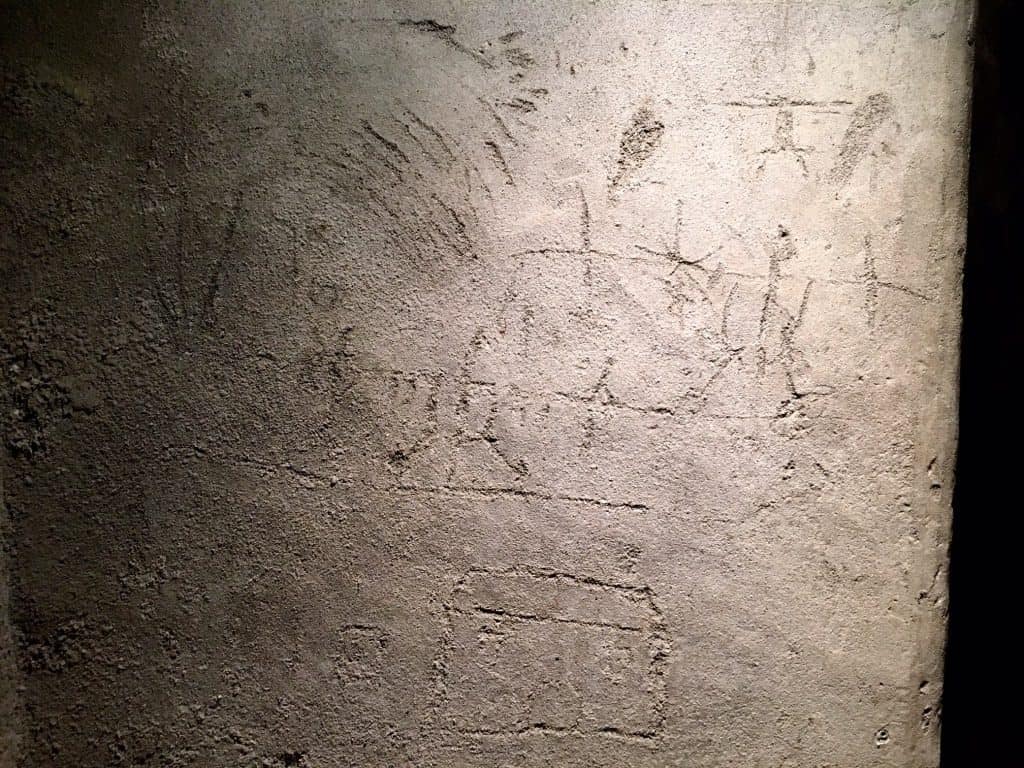 One woman was apparently told by her mother that she was born in the civil war shetlers of Almería, but never knew where they were until years later when they were reopened and she could visit.

The biggest bombing of Almeria was by Hitler on 31 May 1937. Hitler gave orders to bomb Almeria in revenge for the bombing of a German ship. Originally, he wanted to bomb Valencia but his advisors convinced him it would cause an international outcry, so he bombed Almeria instead. A German battleship and 4 destroyers sailed to Almeria and bombed the port and city as much as they could. Approximately 31 people died and many prominent buildings in the city including the Cathedral, Railway Station and Church of San Sebastian were damaged. No official action was ever taken against Germany over the Bombardment of Almeria.

There is also a small hospital/operating room, built in 1938, in response to the many injured people that arrived after the slaughter on the Malaga-Almeria highway. During the civil war Malaga city was captured and many residents tried to flee to Almeria but were shot at by sea and air on their way and 3000-5000 people died. 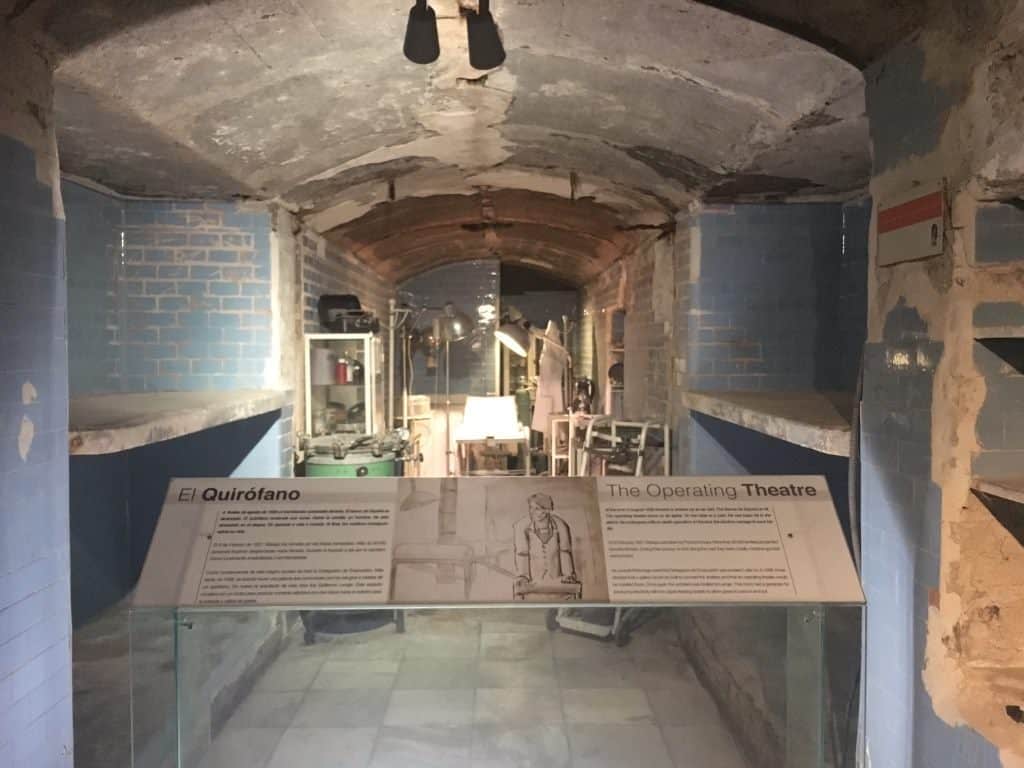 How do you go to Los Refugios Almería?

Only 30 people are allowed down in these old underground bomb shelters at a time, and guided tours are run only a few times a day. To visit Los Refugios you have to book in advance. The catch is, the tour is in Spanish only. I might be learning Spanish, but it’s not quite that advanced yet! However, it’s only €3 so well worth going, even if you don’t understand Spanish and I did once have a guide that was willing to tell me more in English as she was quite fluent.

The building is rather unassuming, and I walked past it multiple times before I realised it was the entrance to Los Refugios, the civil war shelters. 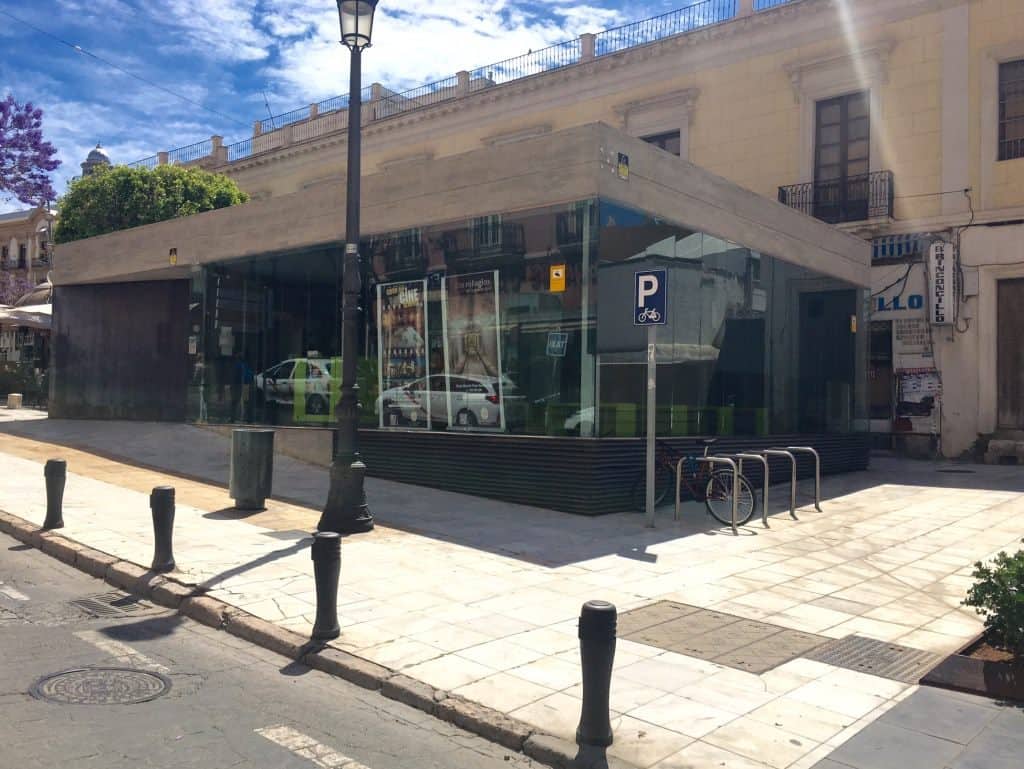 What happens on the tour of Los Refugios de Guerra civil?

Before the shelter tour there is a video played with both Spanish and English subtitles, showing around 3 people speaking about their experiences of the tunnels.

Today you are able to walk around 1km of the tunnels, mostly underneath the Paseo de Almeria, the main street. The tunnels and shelters are around 9 metres deep, with their original walls and ceiling. When you’re walking it feels as though you’re walking slightly downhill and the lowest sections of the tunnels are actually below sea level. The main shelters are wider with bench seats along the edges, and connecting tunnels are much narrower. On the tour, you mostly stay in the main shelters, before leaving through a side tunnel. 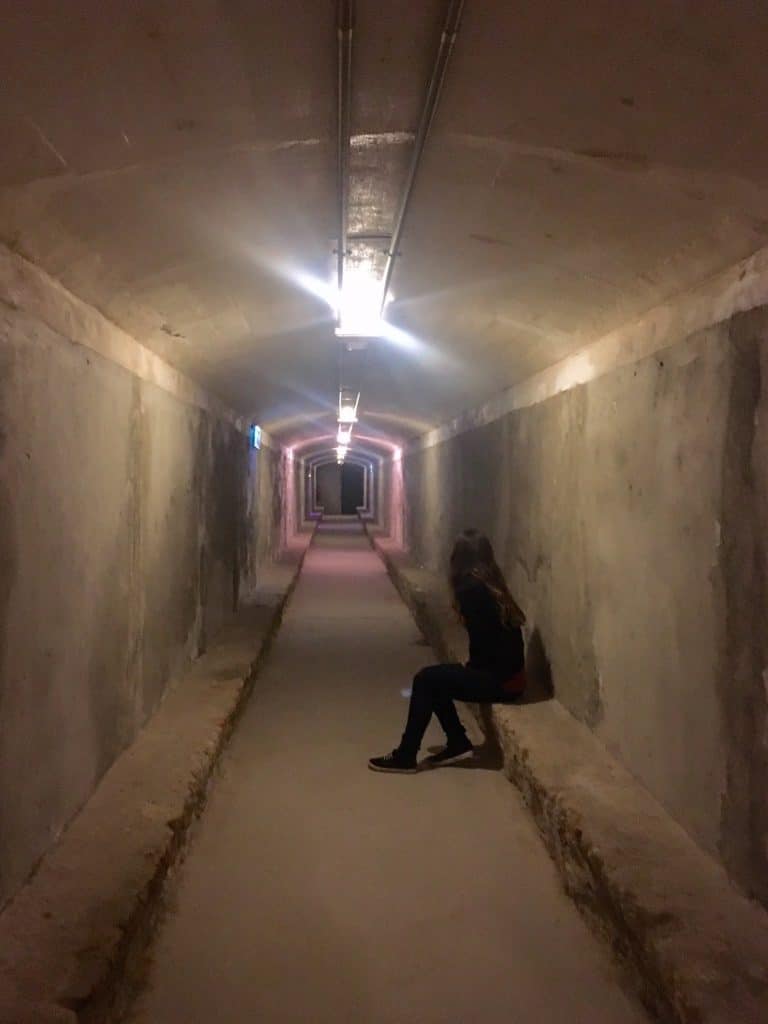 I’d highly recommend a visit to Los Refugios in Almeria, even if you can’t speak Spanish. Both times I went the staff spoke English and offered to answer any extra questions we had. In any case, the experience of visiting the tunnels can’t be diminished by not understanding the words spoken. All you need is to be there and feel the atmosphere to try and understand how it might have been for the people of Almeria to be under constant bombardment and have to seek shelter underground. Sadly I haven’t heard much about this outside of Spain or even Almeria, and I I’d love for more people to know about Los Refugios and what happened here.

Have you heard of Los Refugios in Almería before? Or visited? 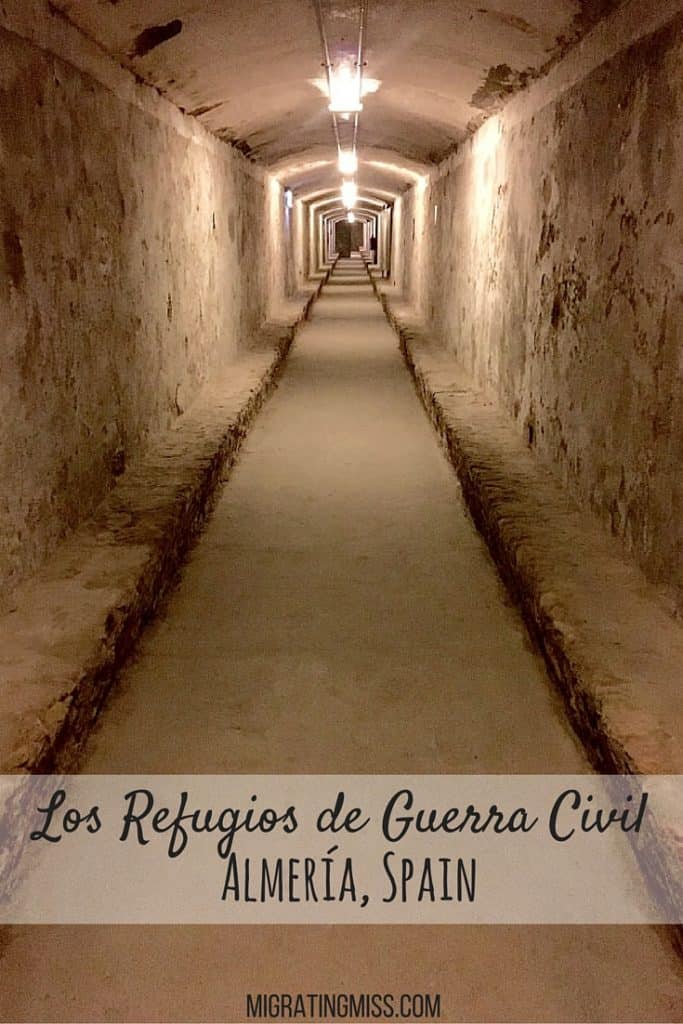