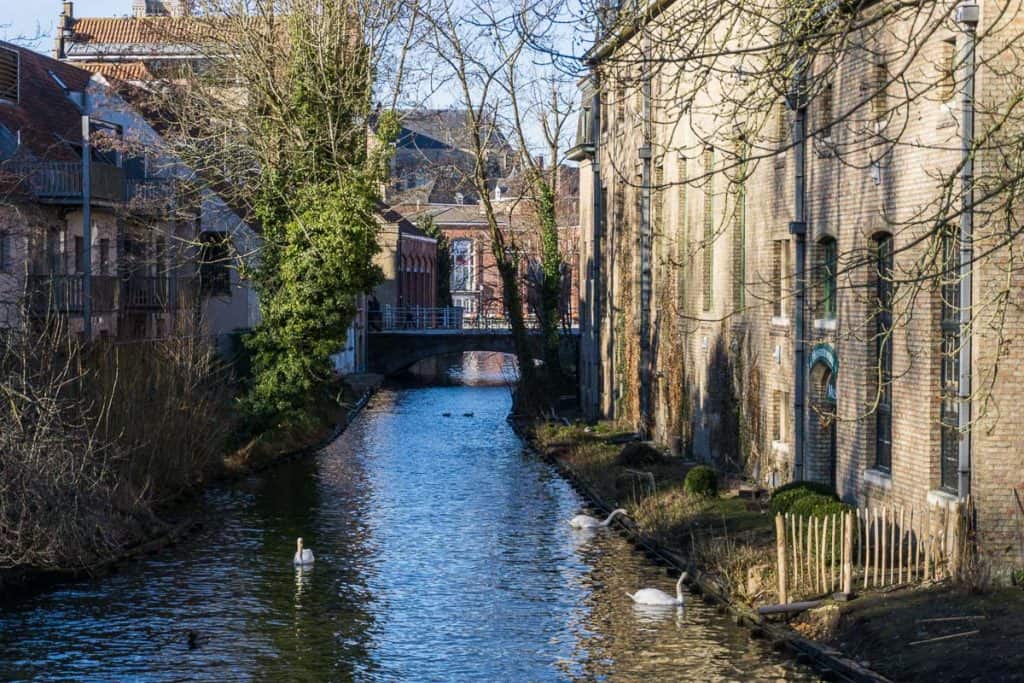 Bruges is a medieval town in the Flanders region of Belgium. It’s popularity far exceeds it’s small population, in large part thanks to the Colin Farrell film, In Bruges. Despite not having seen the film (I know, I know) I knew when we visited Belgium, that I really wanted to spend a day in Bruges! More than one day in Bruges would be ideal of course, but only having a weekend to visit Bruges and Brussels meant we had to make do with what we had.

Bruges is a city of medieval times and was one a prosperous port. Given that it used to be surrounded by walls with only four city gates, most of the things to do in Bruges are within a very close distance of each other. This makes it a great day trip from Brussels, Antwerp, or Ghent, but let’s talk about how to get there later. For now, what can you actually do in Bruges in one day? 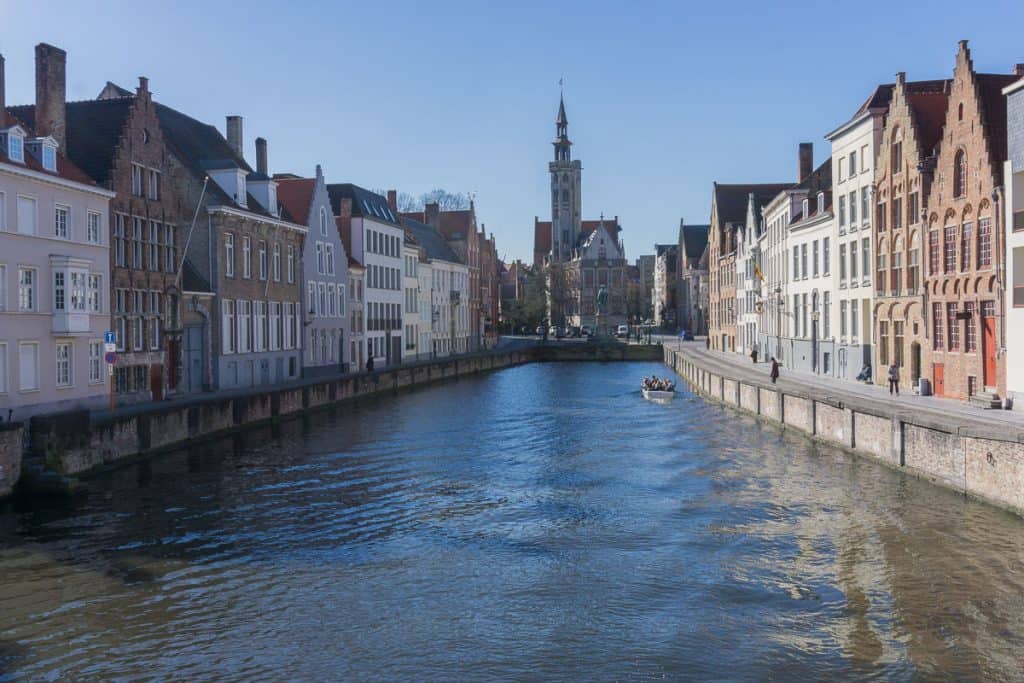 What to do in Bruges in one day

This is a fairly extensive list of all the things to do in Bruges! While you probably won’t end up ticking everything off, you could conceivably make your way through almost all of it, if that’s your thing, or just grab some chocolate and take a wander through the beautiful streets! You won’t be disappointed either way!

This large market square at the heart of the town is a great starting point for any day in Bruges. it was made traffic-free (except for horse and carriages!) in 1996 and became a UNESCO World Heritage Site in 2000. There are lots of chocolate shops and waffle sellers nearby, so you can grab something to eat and people watch if you like, or just pass on through to your next destination. 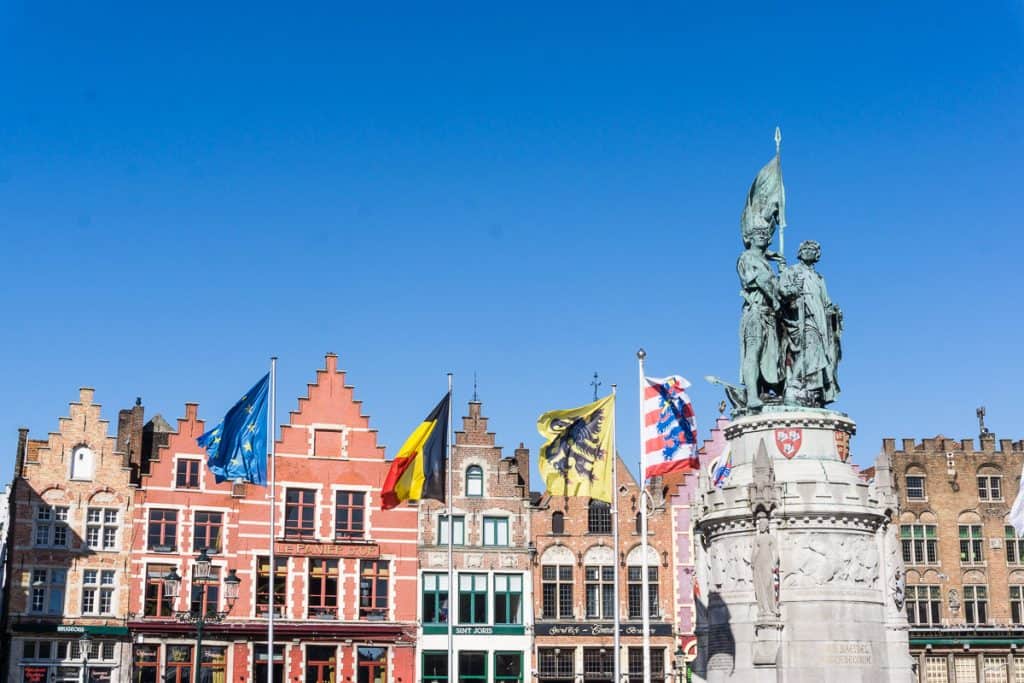 The Historian Brugge takes you back in time through a reconstruction of medieval Bruges. Step into 1435 through a narrative story, portrayed by actors and the scene around them. It might be more entertaining for kids, or something to do on a rainy day.

The Belfry Tower is the imposing 83-metre medieval bell tower that looks over Market Square. For €12, you can climb it’s 366 steps for views over Bruges. 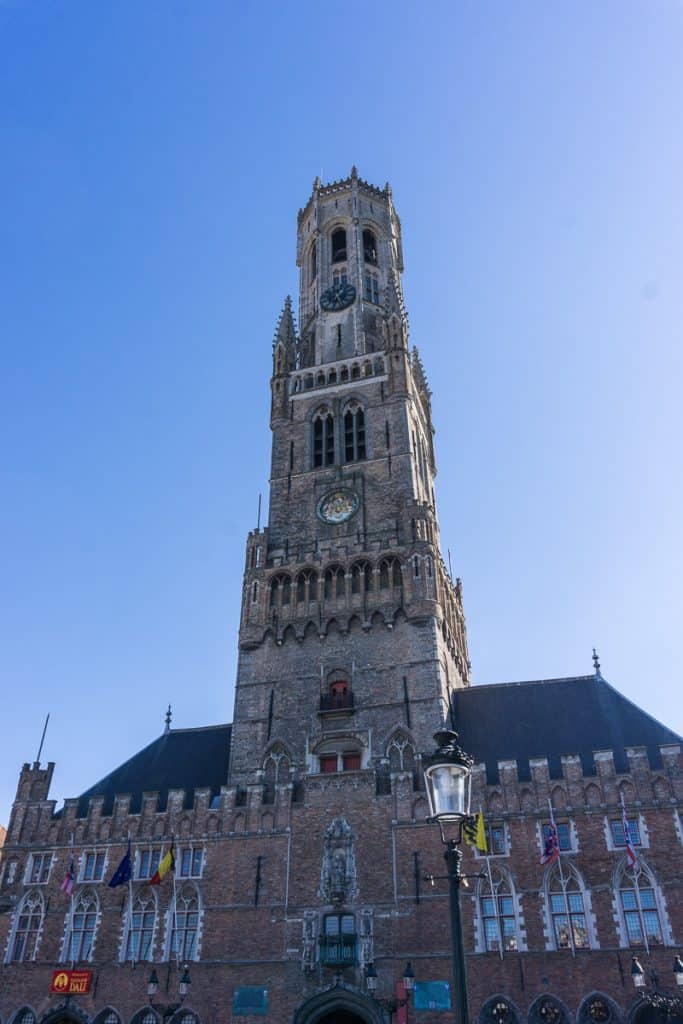 Burg Square is located just down a street from Market Square and used to be the site of a fortress. It now has a variety of buildings that are everything from Gothic to Renaissance in appearance.

This is one of the most picturesque, and consequentially, photographed sites in Bruges. The meeting of the canals with the classical buildings, including an old inn, gives it a romantic atmosphere, particularly when the trees are green, but even in the winter. 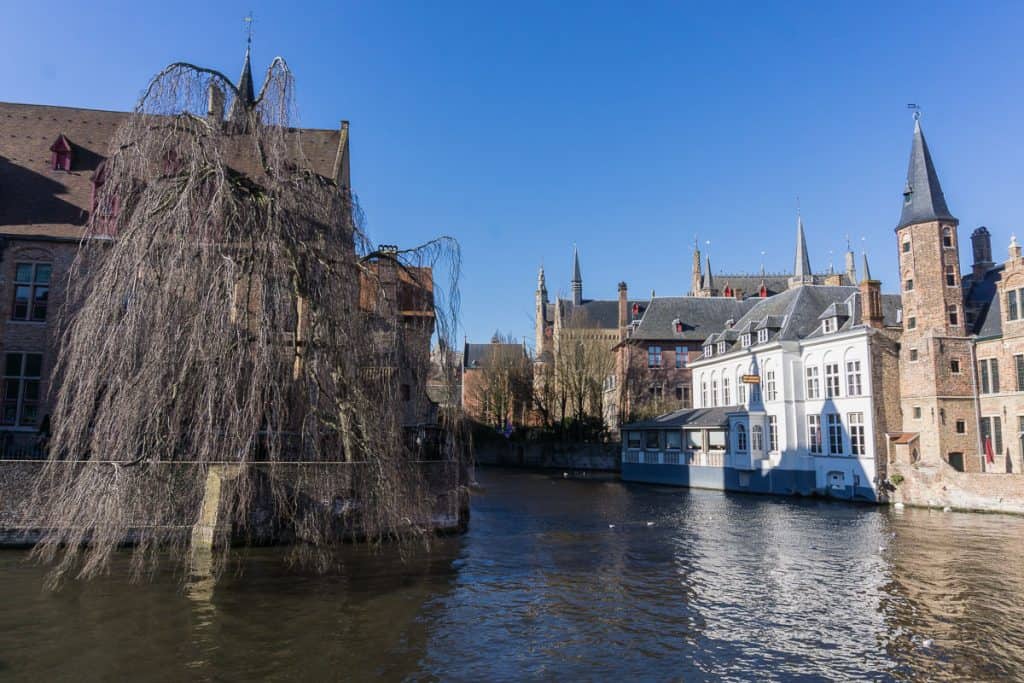 The Groeningemuseum houses a rich collection of Renaissance and Flemish artworks, and it has some of the earliest Flemish art that you can see. It also includes 18th and 19th-century pieces and post-war modern art.

From the 12th to 15th centuries, Bruges was important trading centre between Scandinavia, England, and Germany. The buildings here used to be the houses of the wealthy merchants and it’s a beautiful area to wander around during your day in Bruges, and also less crowded than some other areas of the city. 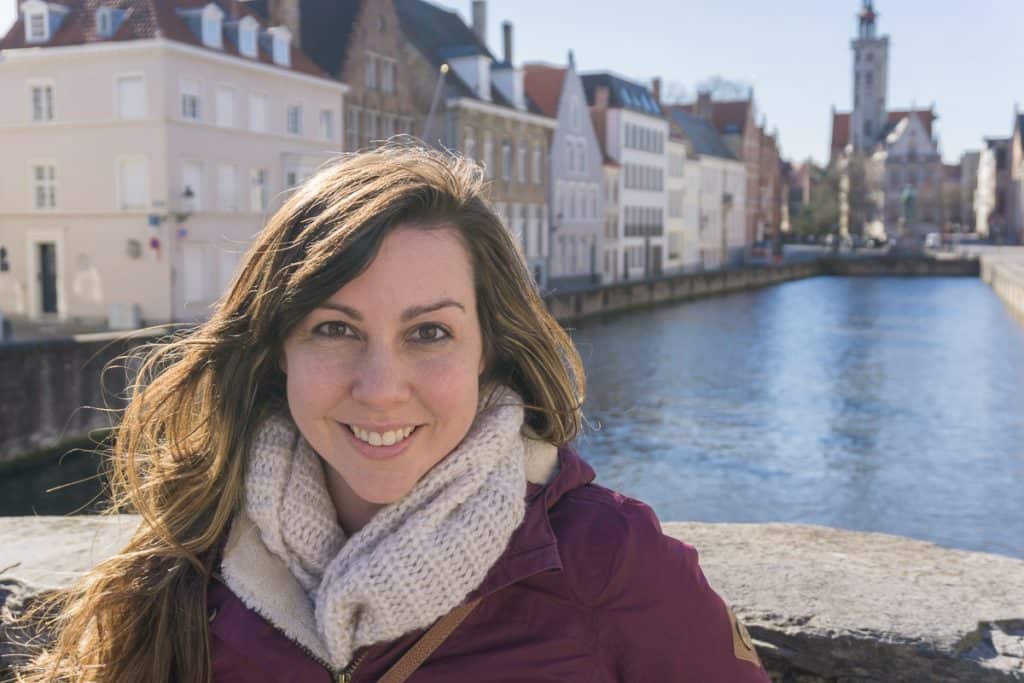 I’m pretty sure this is the most crowded bridge I’ve ever been on in my life, although given its size that’s not really surprising. The “fairy-tale” bridge in the shadow of the Church of Our Lady actually only dates back to 1910, but that doesn’t mean it’s one of the most picturesque spots in Bruges, and one of my favourites.

The bridge was extremely crowded when we first arrived, thanks to a couple of walking tours, but eventually, we were able to walk across it and admire the view for ourselves. 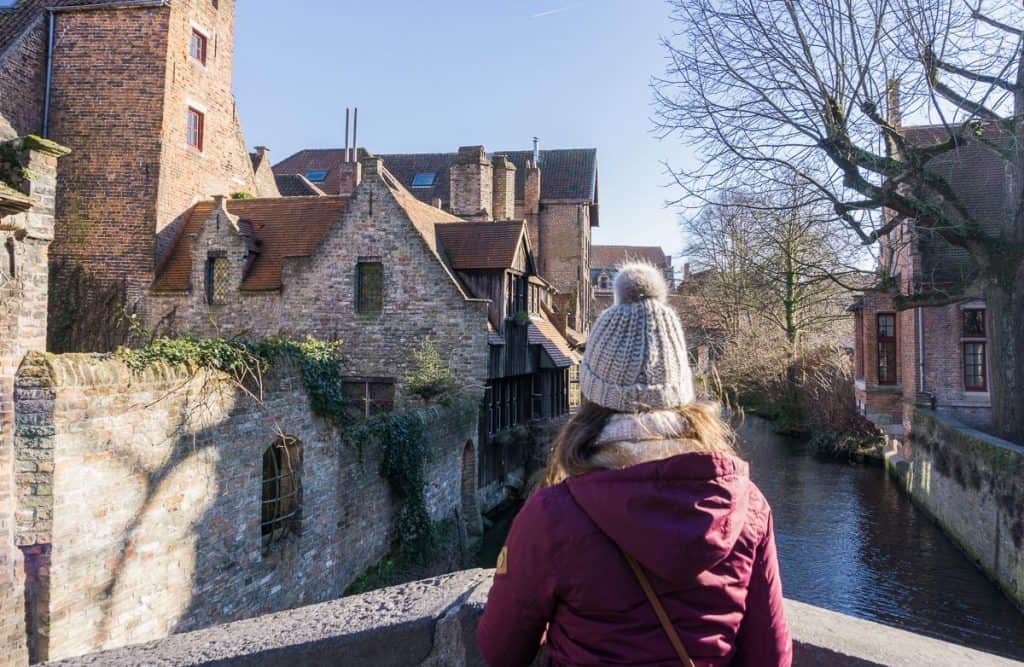 Minnewater Park is a beautiful green area bordering the Minnewater, or “Lake of Love”. It also features the old gatehouse of a castle that used to be near here but has since been demolished. If you arrive in Bruges by train then be sure to wander through Minnewater Park on your way in or out of the old town.

Church of Our Lady

The tower of the Church of Our Lady is the tallest in Bruges, and the second tallest tower made of bricks in the world. The church itself dates back to the 13th-15th centuries, and although we didn’t go in during our day trip to Bruges I did love walking around the outside and admiring it. 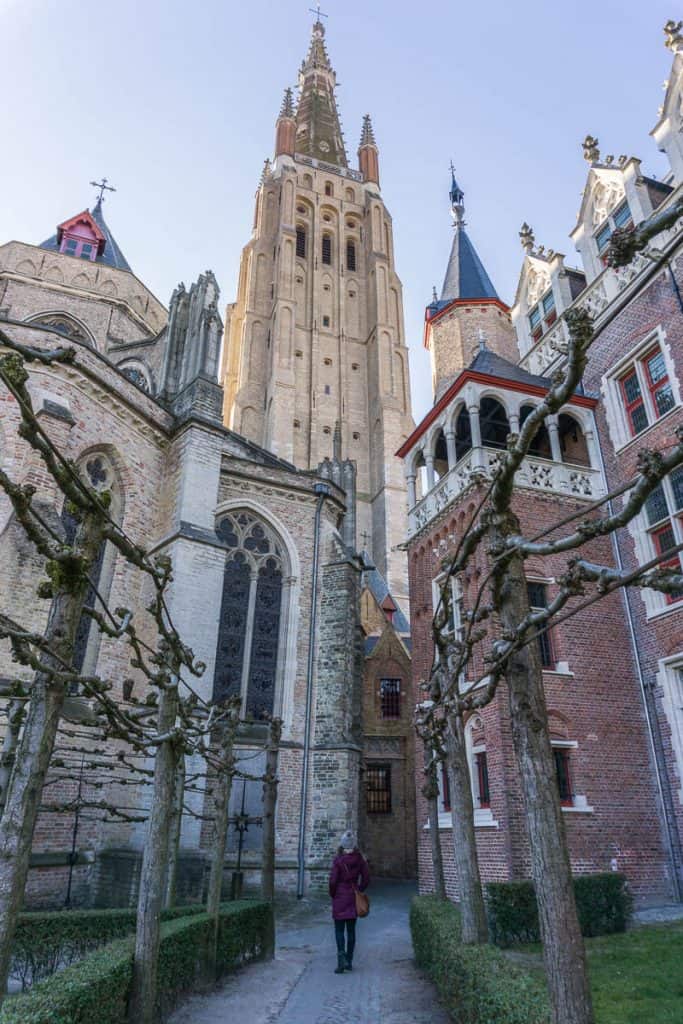 We stumbled upon this gem in Bruges by chance, on our way back to the railway station. A beguinage was a community of lay-women who lived by the rules of the apostles, leading a pious and celibate life. In Bruges, they lived in these white painted houses surrounding a beautiful park of trees and when we were there just daffodils just starting to emerge from the ground. The beguinage in Bruges is now home to the Sisters of the religious St. Benedict Order.

When you wander through, you’re asked not to make noise or take photos, so sadly I don’t have any to show of this beautiful and peaceful spot. Just another reason you have to visit Bruges for yourself!

I know I already mentioned grabbing a waffle in the market square, but it deserves a second mention because waffles in Belgium are seriously amazing. 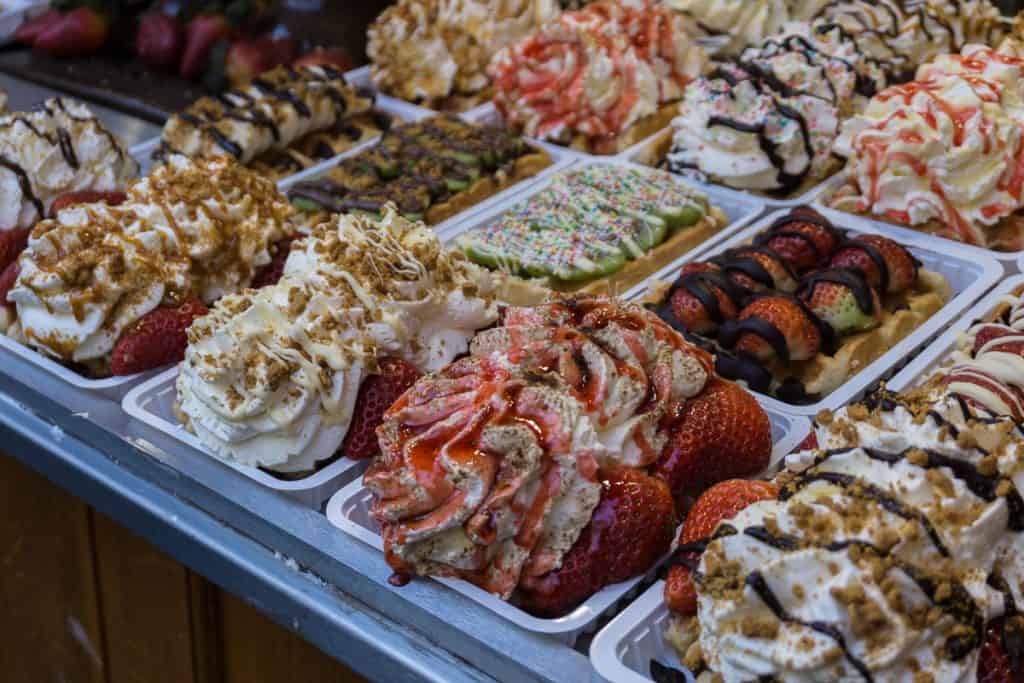 A museum of chocolate? Count me in! Located in a 16th-century house, Choco-Story tells the history of chocolate and how it came to be beloved around the world. Complete with chocolate samples as you walk around of course! We enjoyed the museum as a chance to step out of the cold, and learn a little more about how chocolate came to be, and directly compare the taste chocolate grown in different regions.

Belgium chocolate is famous worldwide, and like most Belgium towns, Bruges has no shortage of chocolate shops. We visited the Old Chocolate House and purchased some delicious pre-packaged chocolates to take home with us (they didn’t last long!). If you visit Bruges in winter, you can also grab a hot chocolate to warm you up for just €1. 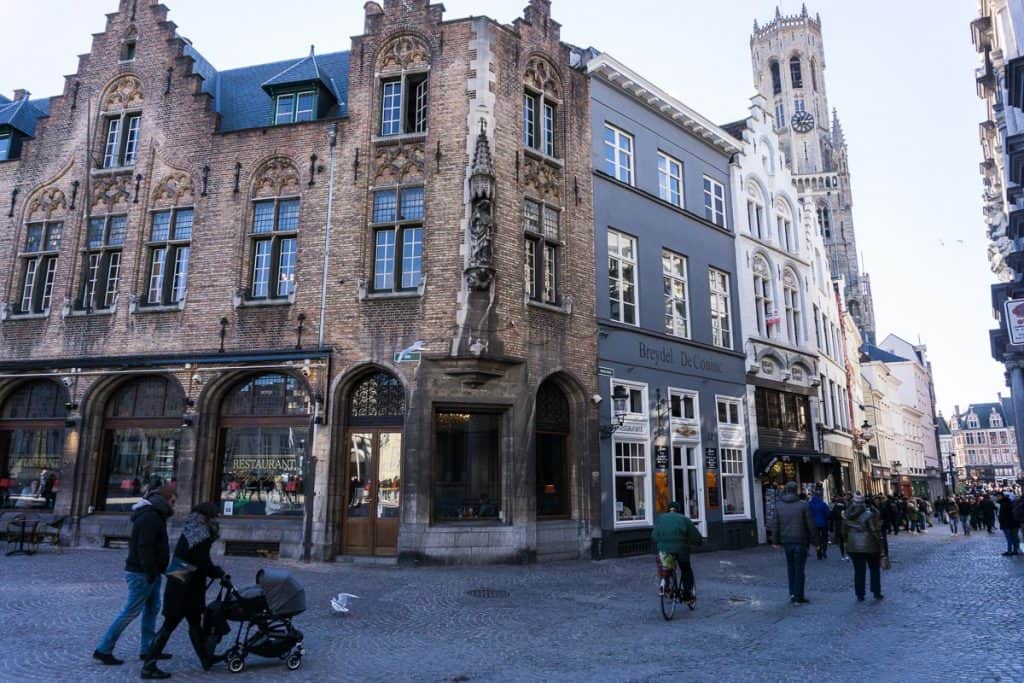 A town that has a museum dedicated to fries, as well as chocolate? Bruges really knows what it’s doing…

The Frietmuseum is dedicated to the humble potato and the production of Belgian chips.

A classic one day in Bruges wouldn’t be complete with a canal boat tour. Although I never took one because it was a rather chilly day and by the time we came across the boarding docks we had walked almost everywhere and were getting short on time, I do think it would be a beautiful trip in the warmer months. There are also landmarks and areas you just can’t see from the street, so it would be well worth adding it to your day if you can. 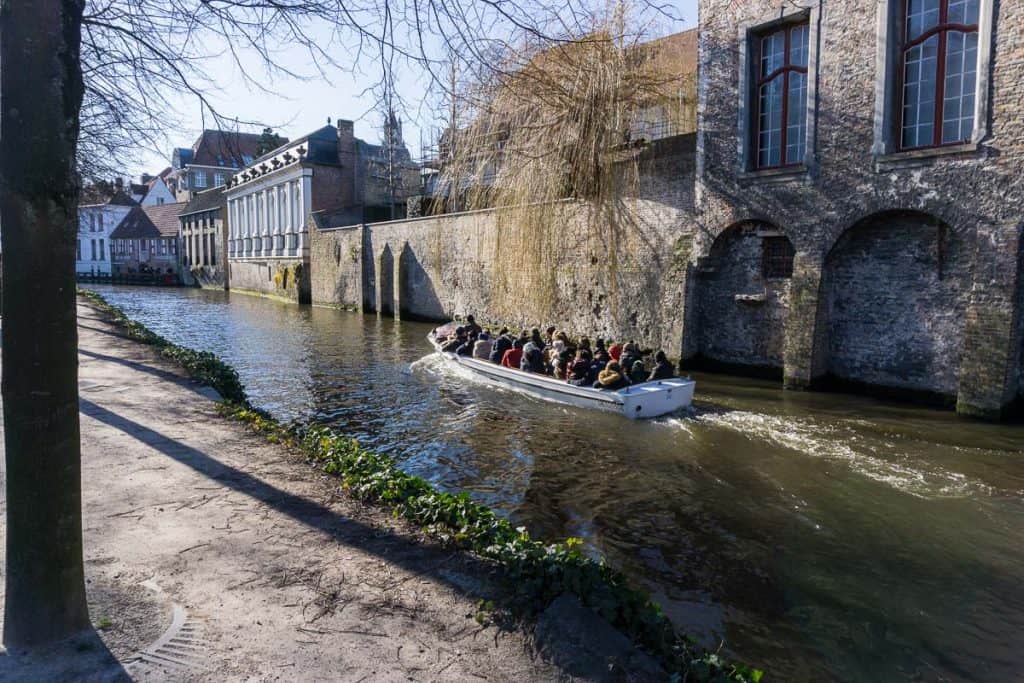 Although at one point there were 50 breweries in Bruges, as the economic power of the town declined as a useful port it dwindled down to three. The De Halve Maan brewery has been making beer since 1856! They run a tour with beer tastings, as does Bourgogne des Flandres. If you’re there in the first weekend of February you can take part in the annual Bruges Beer Festival.

Map of things to do in Bruges in one day

Use this map to help you with planning your day in Bruges!

How to get to Bruges

Like most of Belgium, Bruges is well connected by train. From Brussels to Bruges by train takes just over an hour and costs around €15 return. We had no problems checking train times the night before and just buying a ticket once we got to the train, although the train was still fairly busy. Ghent is on the same train line between Brussels and Bruges, and Antwerp is not too far either. 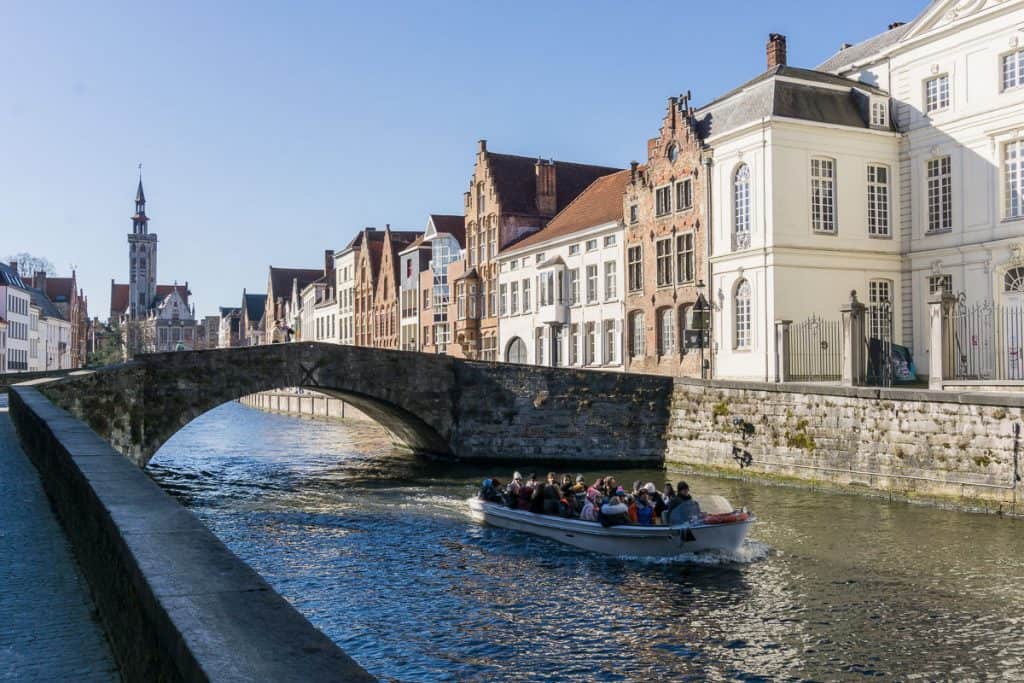 The best time to visit Bruges

Although Bruges is beautiful at any time of year, the best time to visit is summer when it’s lovely to be outside and all the trees are green, however, it is also the most popular time with tourists so it can get very crowded. For that reason, spring and autumn are probably a better time to visit Bruges. Having said all that, we visited in winter and still really enjoyed it! It just meant it was quite chilly walking around and the branches of trees next to canals were rather bare. 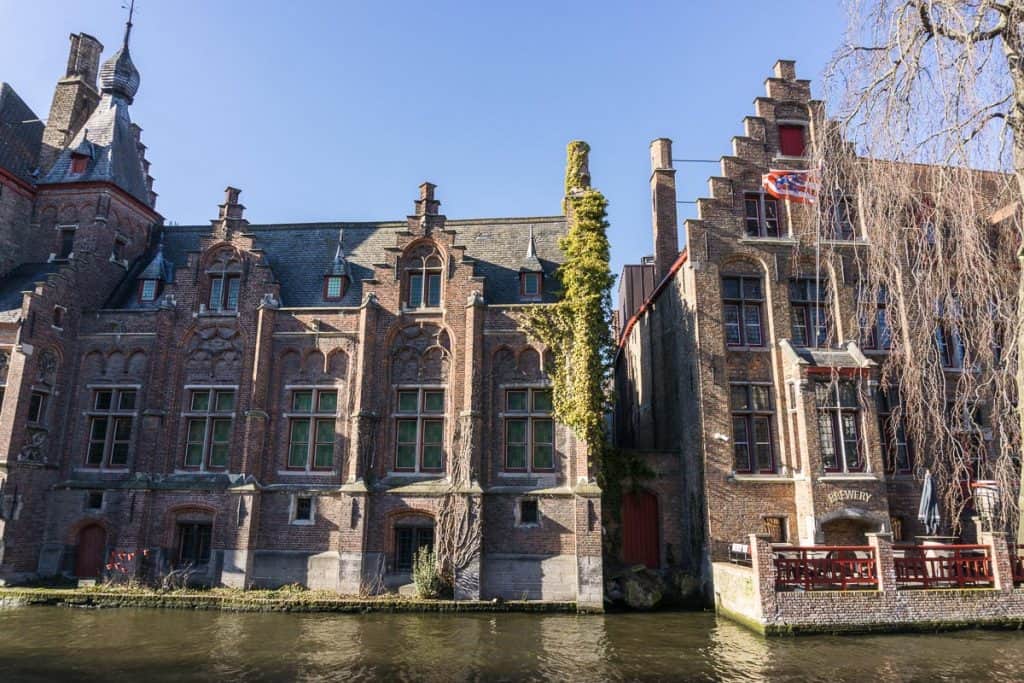 One day is Bruges is enough to see all the main sites and enjoy this small city, but of course, staying over means you can experience it in the evening when all the day-trippers have left, and the buildings along the canals are lit up beautifully. But if a day in Bruges is all you have, then make the most of wandering around this journey back in time!

Want to know more about Belgium? 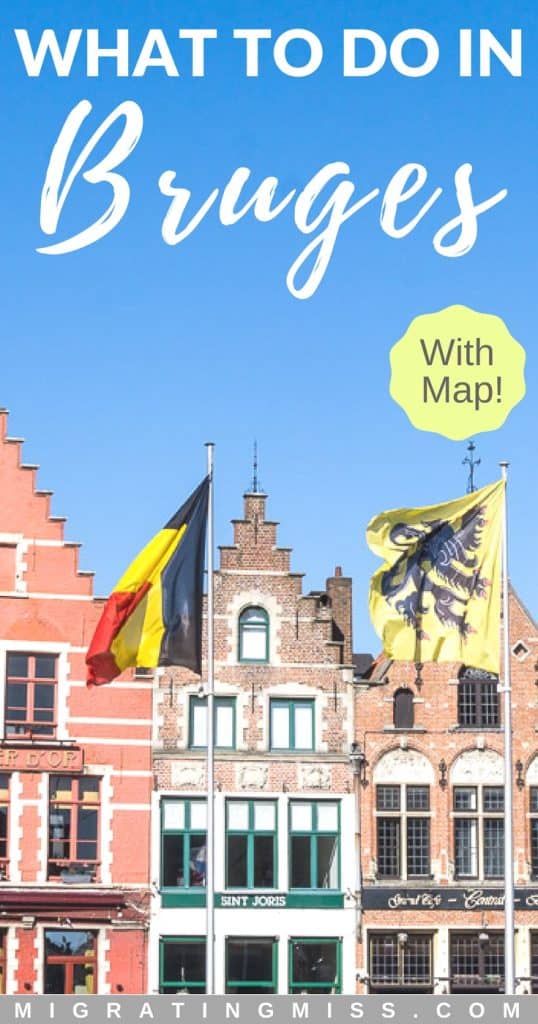 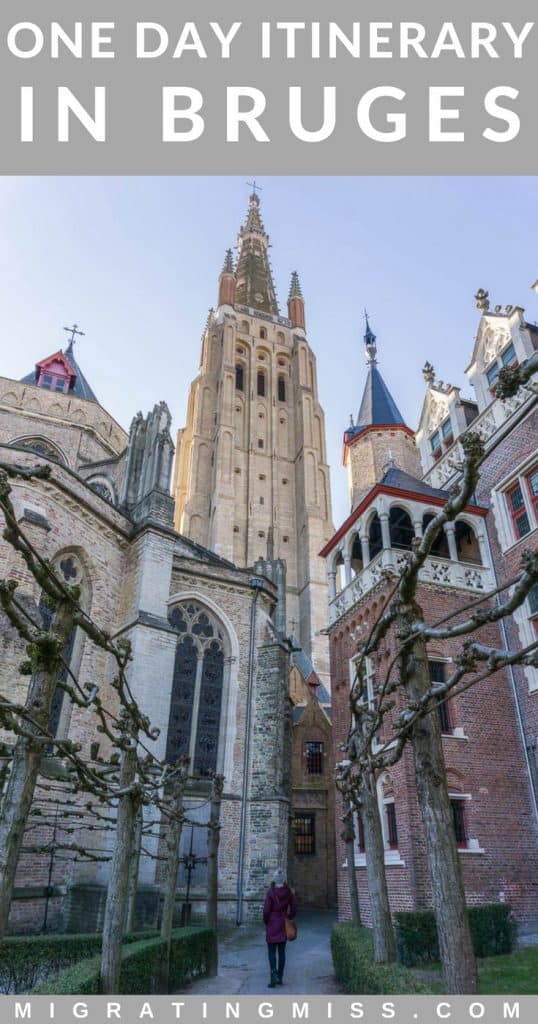