Skip to content
This post may contain affiliate links that I earn a small commission from at no cost to you. Please see my disclosure page for information. Please check for current circumstances before travelling.
The next installment in the Expat Interview Series! I’ve reached out to expats in different countries to hear why people might choose to move abroad, and how they do it. If you want to know more about moving to a particular country this is the place. If you’re interested in taking part or want to see a certain place featured let me know!

Amsterdam is well-known for its canals and art, but there’s much more to the capital of the Netherlands than that! Many visitors only stick to the city centre, but there’s so much to see in the other neighbourhoods of Amsterdam too! I love getting the expat and local lowdown on popular places, so I was excited to Jessica from A Wanderlust for Life about her perspective on moving to Amsterdam from the United States! When I visited Amsterdam I immediately thought that it was somewhere that I could live, and the Netherlands rates pretty highly when it comes to great places for expats. So, here’s Jessica’s story!

I’m Jessica from Virginia in the United States but now live in Amsterdam, the Netherlands. My grandparents took me on my first trip to Europe when I was 16. It was two whole weeks on a river cruise from Vienna, Austria to Amsterdam, the Netherlands through Germany. That trip changed me. It opened my eyes to another part of the world. I was hooked. I feel that it’s come full-circle now. My first trip to Europe had me flying out of the airport I know call my home airport. 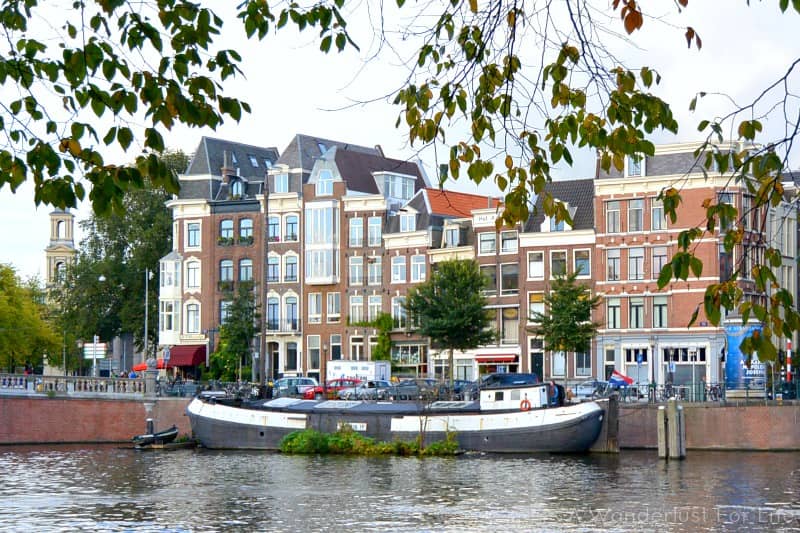 What made you decide to move to Amsterdam?

I wasn’t the only one who fell in love with Europe. My husband and I went on a school trip for two weeks in college traveled around a few European cities. From that point on, he wanted to go back and stay. Originally, he wanted to move to London, but after our week-long trip to Amsterdam to see if we would like it, we both fell head-over-heels in love with the city.

We were able to move thanks to my husband’s career path and his dual citizenship within the EU. So, it was easier for us than most. But we wanted to move because it was a different way of life and when we lived in Virginia, it was good. We had great friends, family was closer, but something always seemed like it was missing. Traveling to Europe was expensive and we lacked excitement.

One day we made the decision to quit our jobs, sell 98% of our things, pack a couple suitcases, and move to Amsterdam. It was an easy and a hard decision. We were fairly confident it would all work out, but committing to something that huge is, well, huge.

Some say we were brave, some say stupid, but I say we were dreamers who took a leap of faith and got really lucky on a few occasions.

Amsterdam or London were the two cities we looked at. Could have gone either way really. But we thought Amsterdam was beautiful, not as fast-paced, they spoke a different language, but everyone speaks English as well. We’ve heard it called “Europe lite”. It’s also a place that is open-minded which we appreciated because we feel people should be as they are. And London is also more expensive than Amsterdam (which seems hard to believe sometimes!). Ultimately, we loved Amsterdam, and two years later, we still do. It was the right decision in every way. 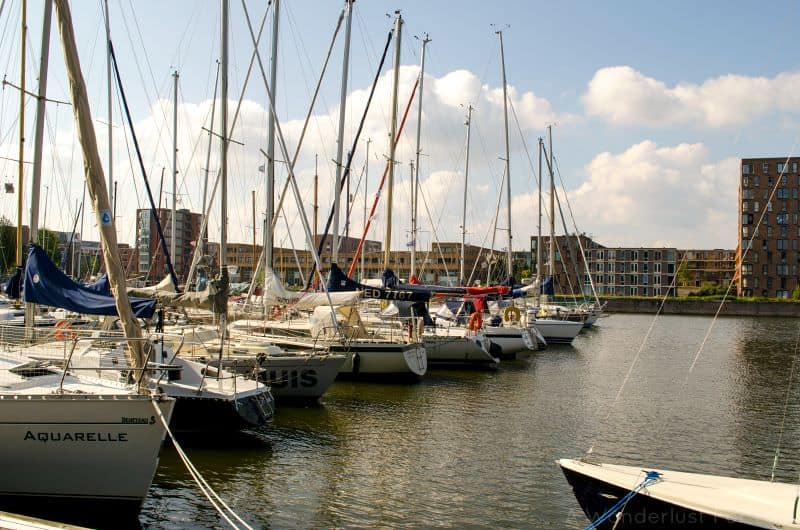 Tell me about the cost of living in Amsterdam.

It’s not cheap! And income is not as high for those who aren’t brought in through a company (there are special incomes and packages for those who are transferred over as expats). Living in the center is virtually impossible it seems due to prices and just lack of open apartments.

There is every kind of grocery store in Amsterdam, from the organic food store to the discount food store. A half-dozen of eggs is from €1.20 to €1.80 depending on which kind you buy and milk ranges from 80 cents to €1.20 for a half gallon. Wine is cheap though! You want a nice wine to take to a party? €15 will easily get you that!

Good cocktails will cost you €10-16 but should be amazing. If they aren’t, just ask me and I’ll get you to the right place! An evening out will be no less than €50 with food and drinks for two (though you can find cheap places). Burgers can range from €8.50-15, and there are some amazing quality burgers around Amsterdam!

You can easily save money by grabbing some fries before dinner at a fry stand, the best is Vlaams Friteshuis Vleminckx, then splitting an entree someone, or just getting a couple of appetizers. If you want alcohol, beer is the cheapest around here. My favorite “cheap” night out is the €15 rib night at Mystique on Wednesdays. Oh, so delicious and if you are super hungry, you get the second rack for €5.

I think you’re staying to see a pattern…my husband’s ancestry and career made things so much easier. While we didn’t have a job when we moved, Amsterdam is one of three hubs in Europe that has many jobs available for his industry. So he got a job first (he had to in order to sponsor me to stay!). Then, I ended up getting a job at a startup company first (those are easy to come by but don’t pay well), then started working at the same company he did!

The process isn’t as easy as some make it out to be. Yes, everyone speaks English, but many companies want you to speak Dutch too. There are definitely companies and specialities that don’t care if you only speak English, but you have to look hard to find them!

Do you need a visa to live in Amsterdam?

You need a visa to live anywhere in Europe if you are American. Because my husband had dual citizenship with another European country, we were able to settle in any EU nation as part of the bigger EU agreement. However, he did have to prove he could support me financially which meant we had to take his work contract to the immigration office. Now, I have residency in the EU which is good for five years, then can easily be renewed. 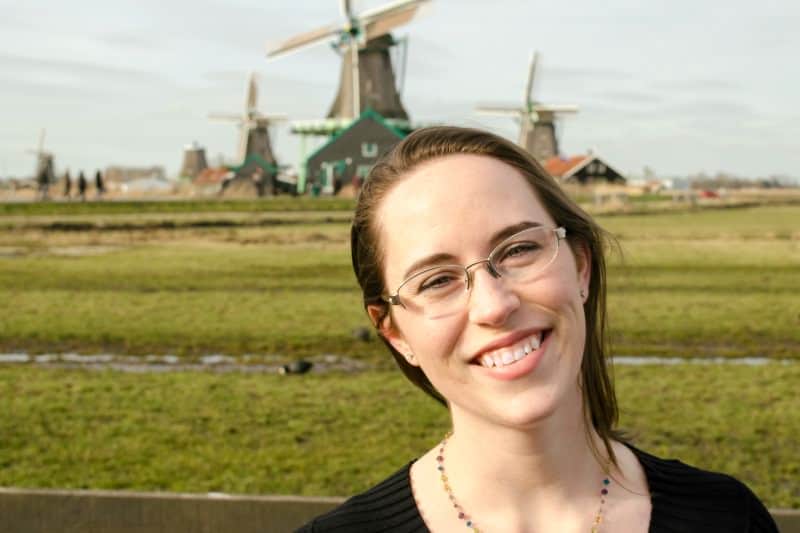 I found it easy to make friends. You get out what you put in, as with most things. Put yourself out there, and do things! Meetup.com is huge in Amsterdam, as is Internations and many other groups to help you meet people. I have an entire post on how to make friends, so I hope it’s helpful!

What’s the best thing about living in Amsterdam?

There is always something to do! It has everything you could possibly want in a city and yet still feels like a village. I run into people I know all the time. And the airport is about 20 minutes away which is perfect since we love to travel.

What’s the hardest thing about living in Amsterdam?

A bit of the same thing. There’s always something to do but I might not be able to do, or afford to do, everything! But the hardest physical thing is trying to bike during tourist season. I always have my brakes serviced before summer 🙂

People are more interactive, more social. People are direct and honest, and people don’t step on eggshells as to not offend. Not that people are mean or unfiltered, but this way of socializing leads to happier friendships with clear expectations. It’s awesome. 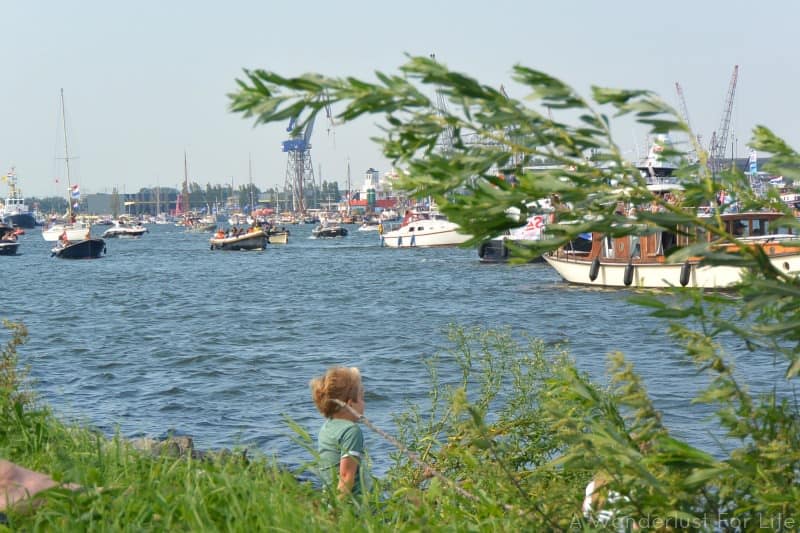 If we had just one day in Amsterdam what should we not miss?

Canal cruise and getting lost by walking through the canal belt. If you are a history buff, then don’t miss the Anne Frank house (buy tickets online ahead of time!). Then head to a brown cafe for a beer and maybe walk to grab some fries with mayo.

Find a market or festival to experience! I’m not talking about the daily markets on Albert Cuyp or Waterlooplein. I mean Pure Markt, Sunday Market, or Neighborfood Market. And we have so many festivals year-round and there’s something for everyone!

If you could give one piece of advice to people looking to live in Amsterdam what would it be?

Do your research and be prepared with all your documents and have them ready with an apostille. This is so important and will save you time and money. Though, that goes for anywhere I think.

For Amsterdam, finding a place to live can be difficult. Join Expats in Amsterdam Facebook groups to meet people ahead of time and perhaps grab a temporary apartment before you arrive so you can see which neighborhoods you like and where you’d like to settle before signing a longer term lease.

Would you ever move to Amsterdam?

2 thoughts on “Expat Interview: Moving to Amsterdam With Love”