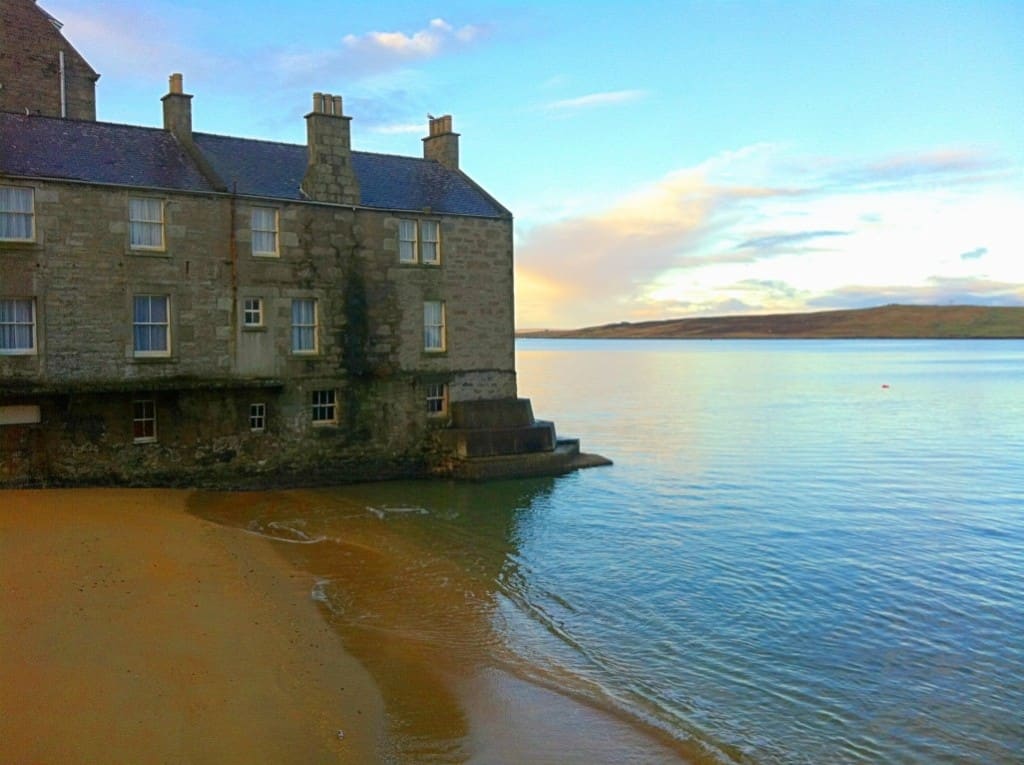 Have you heard of Shetland? If not, I think it’s time you do!

Not many people I’ve met in the United Kingdom have travelled to Shetland, despite what it has to offer. Although visitor numbers are rising, largely thanks to cruise ships, there was a time when most visitors were made up of friends and family, or even business visitors, rather than holidaymakers. I think that doesn’t represent what Shetland really has to offer and a cruise ship is unlikely to give you the full experience, and I want to show you why Shetland should be bumped up your UK bucket list!

Shetland is the group of islands that usually appears next to the United Kingdom in a box of their own on the ma because they’re so far north they’re almost as close to Norway as they are to Scotland. There are over 100 islands that make up Shetland, but only 15 are inhabited.

How do you get to Shetland?

If you’re looking at a map you might wonder how to get to Shetland, but it’s actually relatively easy. You can go to Shetland by air or sea. Northlink Ferries sail from Aberdeen direct or by way of Orkney. You can take an overnight journey and stay in a cabin on the ship, an experience all on its own. If that’s not your idea of fun, or you want to get to Shetland faster, you can take a flight directly to Sumburgh Airport at the bottom of the mainland. There are several flights per day from Scotland and even flights from Bergen, Norway. Once you’re there you can explore by hiring a car, public transport, or even cycle if that’s your thing. 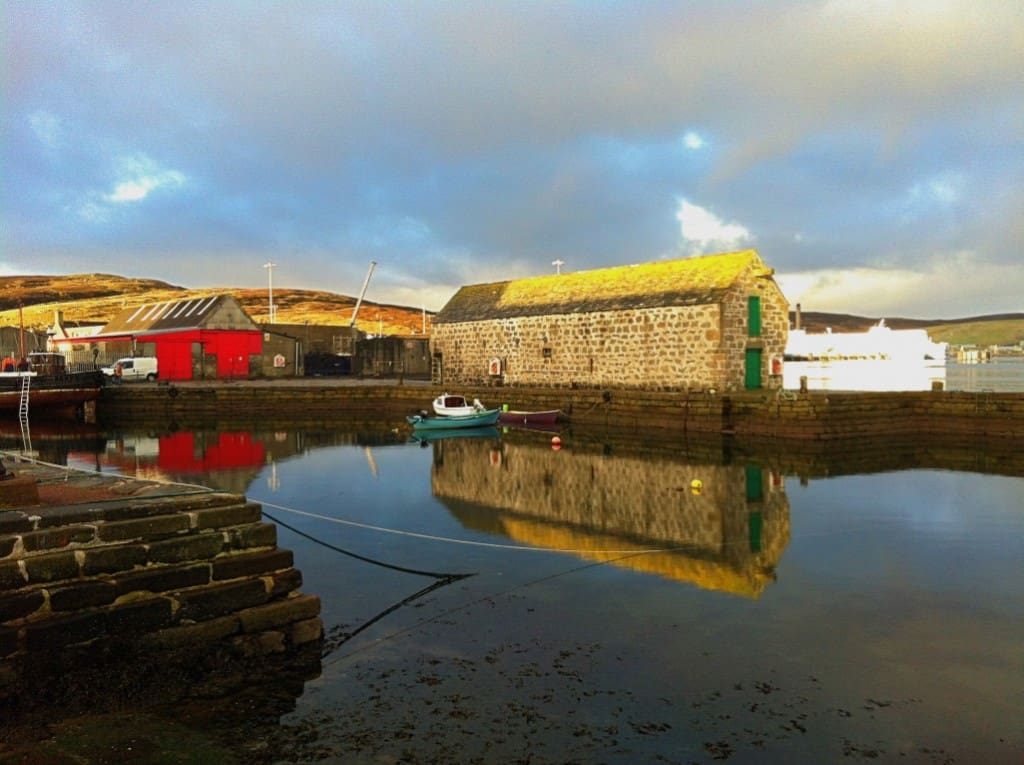 Why did I visit Shetland?

My desire to visit the Shetland Isles stemmed from a family connection. Shetland used to be a thriving fishing port, but that slowly that changed as work declined and the population dropped. In the 1920s and 30s, there was a significant amount of emigration to New Zealand, Australia, and Canada. During the Second world War a short boom ensued with troops stationed in Shetland, but after the war, most people left. In 1861 the population had been 31, 670, dropping to 17,325 in 1971. The population is now around 22,000, in part thanks to the oil and gas located offshore.

In 1926 my great grandparents were living on the northern most island of the Shetland, called Unst. Their village population had dropped dramatically due to lack of work and life probably wasn’t particularly easy. They never owned a vehicle and walked for miles to collect peat to burn in their house for warmth.

100 years earlier people had begun moving across the world to New Zealand and the flow hadn’t really stopped. My great grandparents packed up their possessions and walked with their children from Unst to Lerwick and they left, never to return to the house below. Even after they moved to New Zealand they continued to walk everywhere, much to the amusement of their neighbours!

My grandfather was born after they arrived in New Zealand, and I never knew my great grandparents, but my grandfather was always proud of his Scottish ancestry and he instilled that pride in me.

Maybe because of that, I’ve always drawn to visiting the Shetland Isles, so far from where I grew up. I love history and tracing my own family journeys from around the world to New Zealand. Shetland is one of the concrete places I can trace my family back to, like many other New Zealanders, Australians and Canadians probably could if they tried. 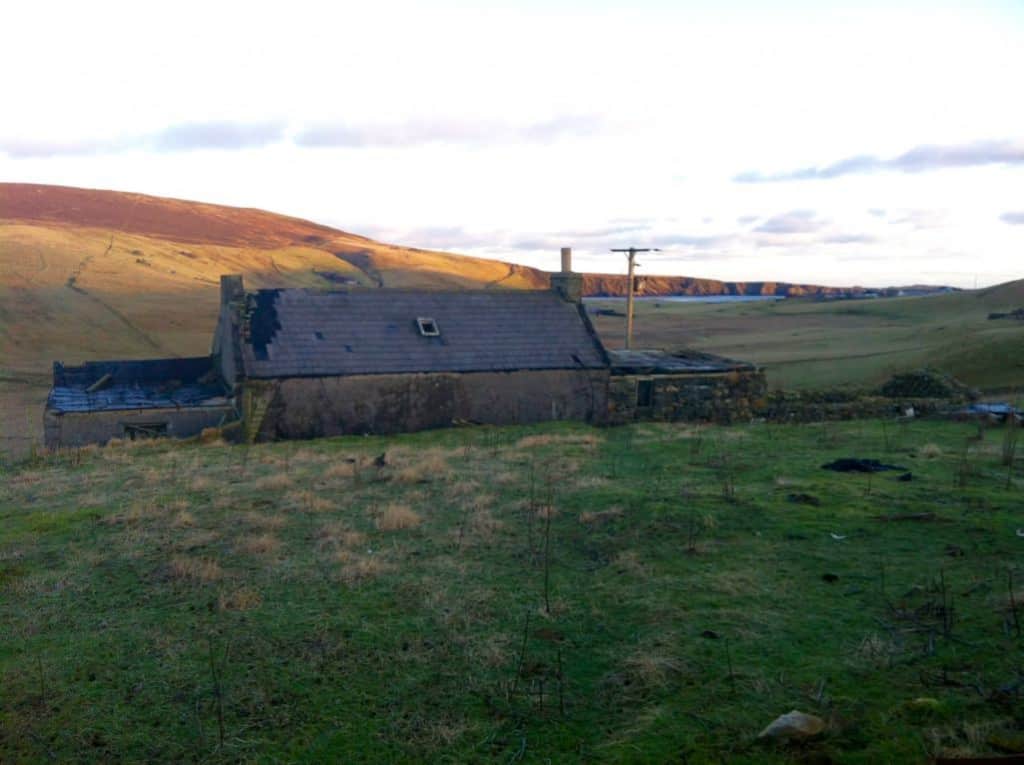 Why you should visit the Shetland Isles

The Shetland Isles are unlike any place I have ever been. I’ve never felt so grounded in history before. Apart from the most amazing historical place I’ve ever been being located there, the whole group of islands is covered in history dating back to prehistoric and Viking times. It’s the land of abandoned stone houses and ruins.

The history and culture of Shetland

Shetland might be part of the United Kingdom and Scotland, but it was under Norse Rule until 1469, so it has it’s own culture as well. People have been living in Shetland since 3000BC, which I can barely even comprehend. A visit to the Shetland Museum in Lerwick gives you a great overview of the extensive history of these isles including Pict and Norse history. I have a reputation in my family for “speed museuming” as I call it, but Shetland Museum is one of the few museums I actually could have spent even more time in than I did!

The Norse culture has continued to have an influence on the life of Shetlanders, with Old Norse words peppering their dialect, houses being built in the Scandinavian style and place names referencing influential Norse people.

When I visited Lerwick we went to a traditional music evening with fiddles and accordions, and I couldn’t get over the musical talent in this small place. I’ve honestly never seen so many of those instruments in one room and been shown the talent to play them in old and new ways.

The people we met in Shetland were all so friendly and welcoming, and it felt like staying in one big community. 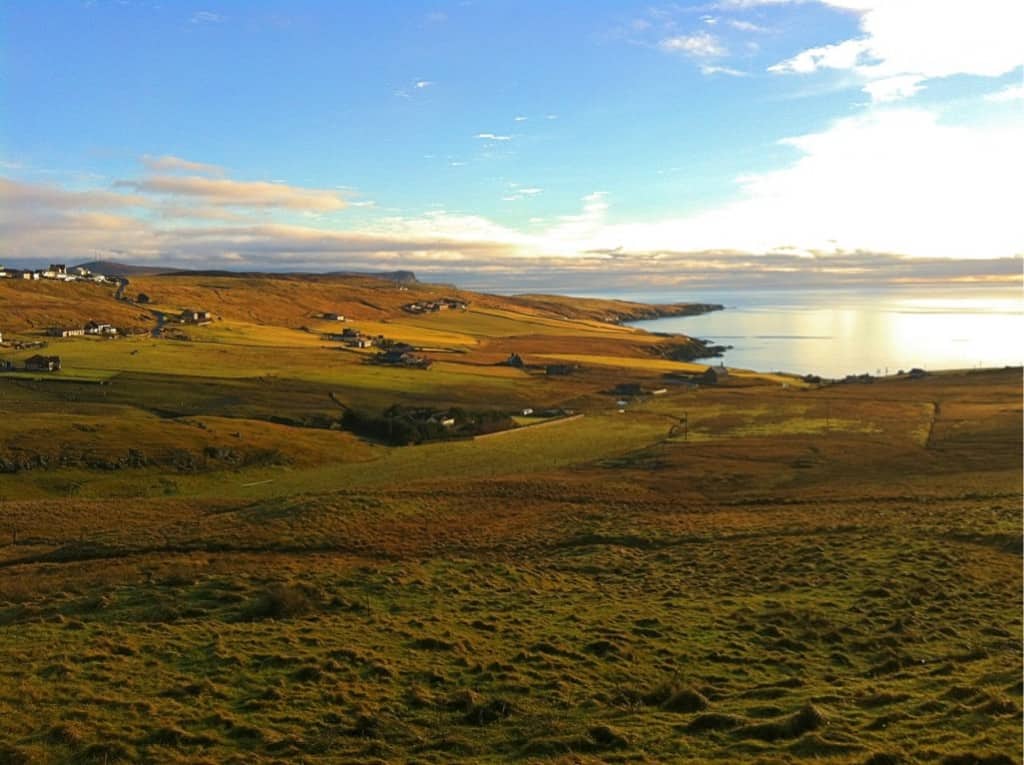 The climate of Shetland

I visited the Shetlands for the first time in January, definitely not that height of the tourism season this far to the north, unless you’re headed to Scandinavia or Iceland in a bid to see the Northern Lights. Some would say I’m crazy to travel in the coldest month of the year, but I’ve never been one to let the weather put me off.

Luckily the warm waters travelling past Shetland mean it’s warmer than you’d think for somewhere on the same level as St Petersburg. The only thing about visiting Shetland in the winter is the daylight. This far north daylight in summer can last up to 19 hours per day, but in winter, that swings the other way to around only 6 hours per day. This means long summer days for exploring, and long winter nights with chances of seeing the Northern Lights! 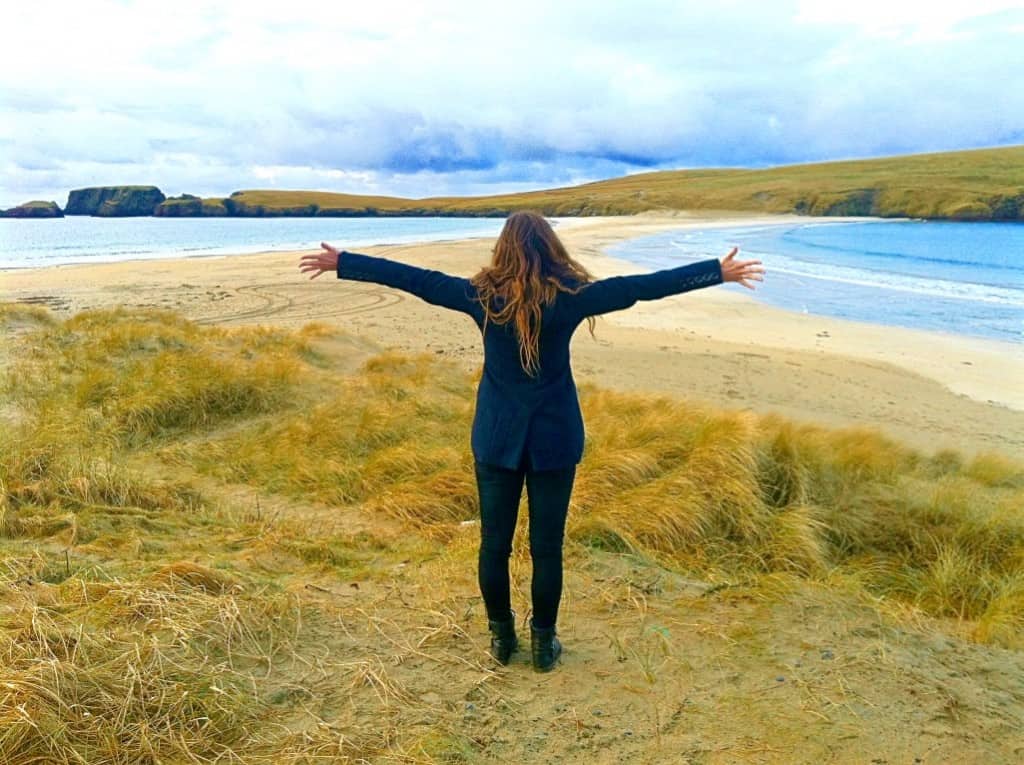 Top things to do in Shetland

The scenery in Shetland is beautiful, and I need to go back because I feel like my photos don’t do it justice. There are very few trees on the islands because after 5000 years of inhabitation and logging they won’t grow. The beaches are beautiful and empty, and the rugged coastline could rival the rest of Scotland or Ireland any day. There are great places for walking if that’s your thing, and all sorts of wildlife to see, including seals, whales, and puffins.

You can eat your way through fresh produce and abundant seafood available in Shetland, and try local dishes made with things like the Shetland Black Potato, reestit mutton (dried mutton) and the more distinctive flavoured Shetland lamb. There are local sweets and abundant bakeries to treat yourself in.

The aforementioned Shetland Museum in Lerwick is a good place to start to understand Shetland, but history is really all around you. Visit Jarlshof, a settlement where generation upon generation lived, back to prehistoric times. Explore castles and see standing stones, old World War Two bunkers and the northern most areas of the United Kingdom.

One aspect of Shetland culture that is known out of the shores of the isles is Up Helly Aa. Through January there are fire festivals in most localities, but the most well known is Up Helly Aa in Lerwick. Locals dress as Vikings for the day, host events and performances in halls and burn replica Viking longships. If you’ve been to Edinburgh at Hogmanay you might have seen the Shetlanders leading the torch procession a couple of nights before New Year. 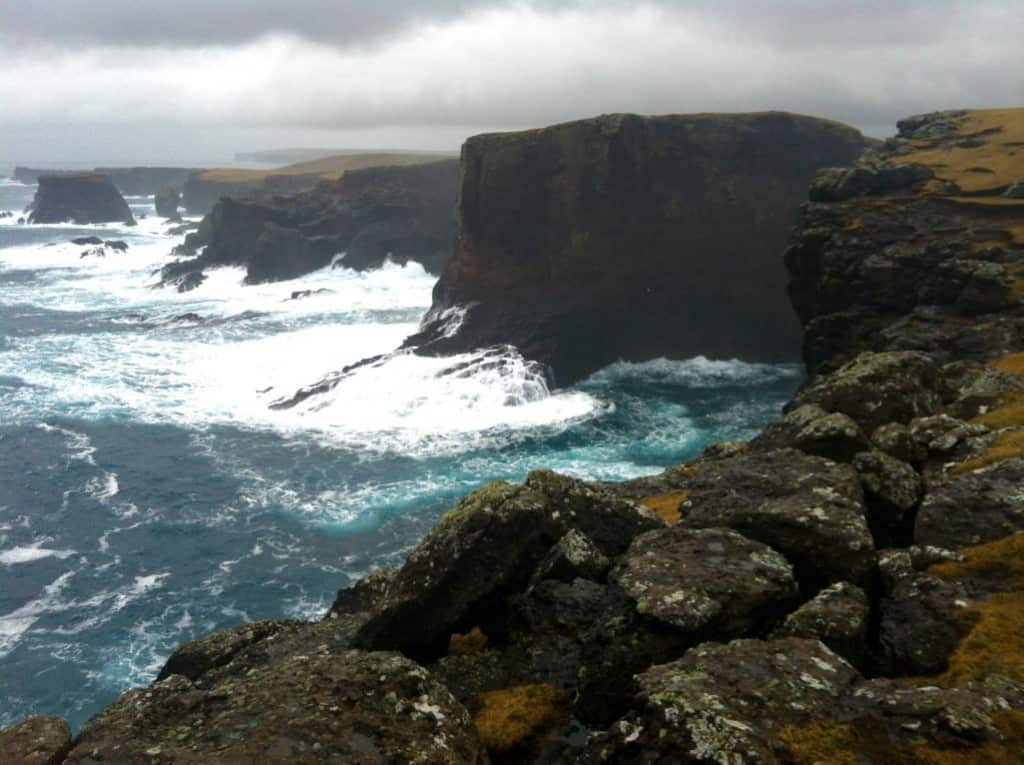 In short, the Shetlands has a lot to offer, and it’s often overlooked as a destination to visit as part of the UK. It has as much to offer as any holiday abroad and provides a different experience to the rest of the country. If you’re looking for off the beaten path, then Shetland is certainly it.

I can’t wait to go back!

Have you heard of Shetland? Would you visit? 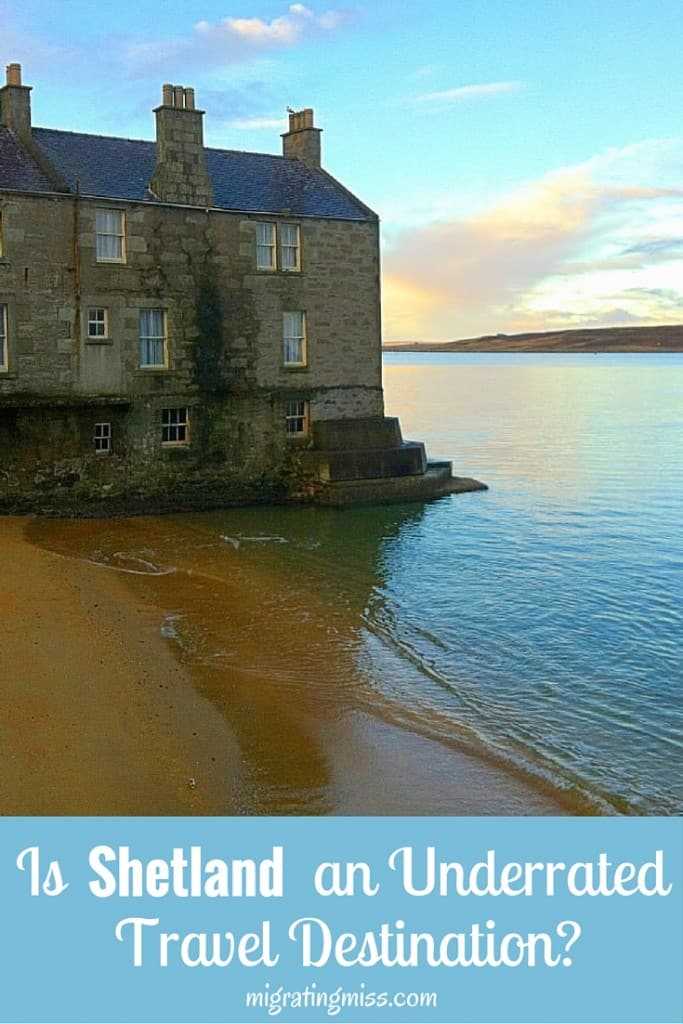 7 thoughts on “Is Shetland an Underrated Tourist Destination?”