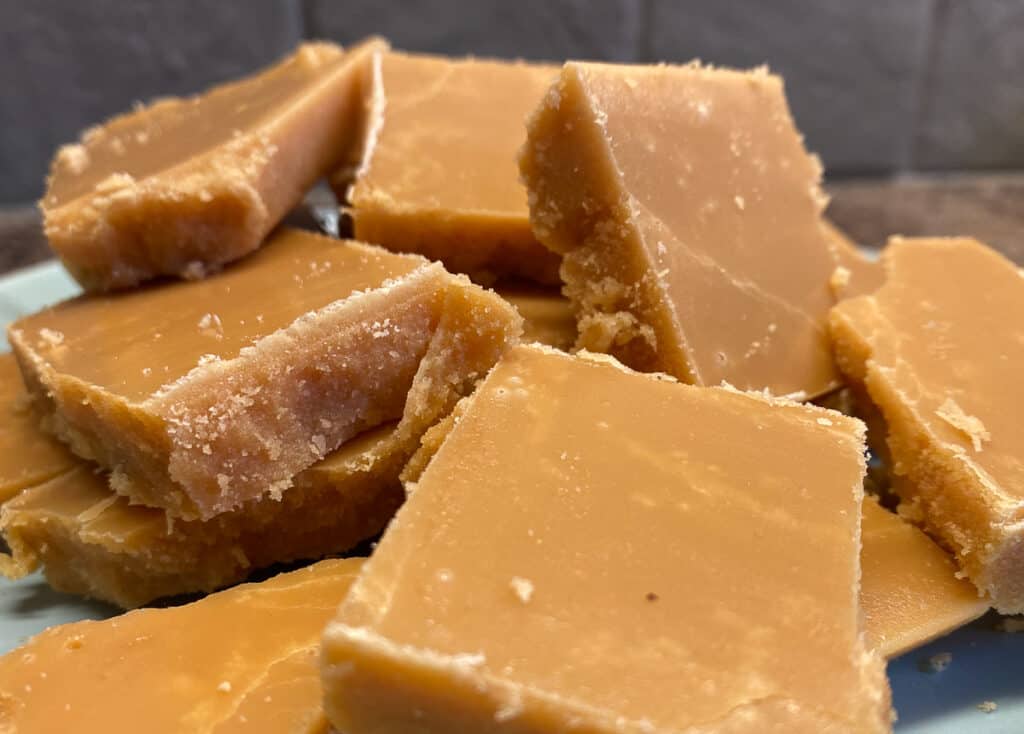 Traditional Scottish tablet is a delicious, sugary, sweet or candy with a slightly grainy texture that melts in your mouth. When I try and explain it to people who’ve never heard of it or tasted it I usually compare it to fudge, and I have heard it called Scottish fudge before, although it’s has a medium-hard texture rather than soft.

I remember people talking about it when I first moved to Scotland, telling me that I just had to try it. When I finally did I wasn’t disappointed! It’s delicious sugary goodness and seriously addictive. Not so good for the waistline but definitely the perfect treat when you want something sweet!

Where does tablet come from?

You’ll often hear it referred to as “Scottish Tablet” but there are actually lots of similar sweets to tablet around the world, although they often tend to be a bit softer than the traditional tablet here.

I realised we had something really similar in New Zealand called Russian Fudge (although I can’t seem to find any reason why it’s called that and all recipes seem to originate in New Zealand). It’s essentially the same but with Golden Syrup added in it too.

In Latin American there’s Dulce de Leche en Tabla, then Borstplaat in the Netherlands, and Sucre a la creme in Quebec, Canada. Sometimes you’ll hear it called Swiss Milk Tablet, but that refers to the type of condensed milk used rather than anything to do with Switzerland.

But having now lived in Scotland for years, I have to say I’m most partial to Scottish Tablet! It’s become a part of my life here. Most weddings I’ve attended feature tablet after the main meal or as a favour to take home with you, and we even had tablet on the cake table at our wedding! It’s often present in hotels/B&B’s as a treat on the tea tray, and there are lots of variations to be found like Tablet Ice-cream and Tablet Cheesecake.

Basically, you can’t visit Scotland without trying tablet! But I have to say the homemade stuff is always been better than the bought kind because it doesn’t need preservatives or any substitution for milk products (not saying all bought ones have these but many do!), so why not try your hand at making your own with the Scottish tablet recipe below? 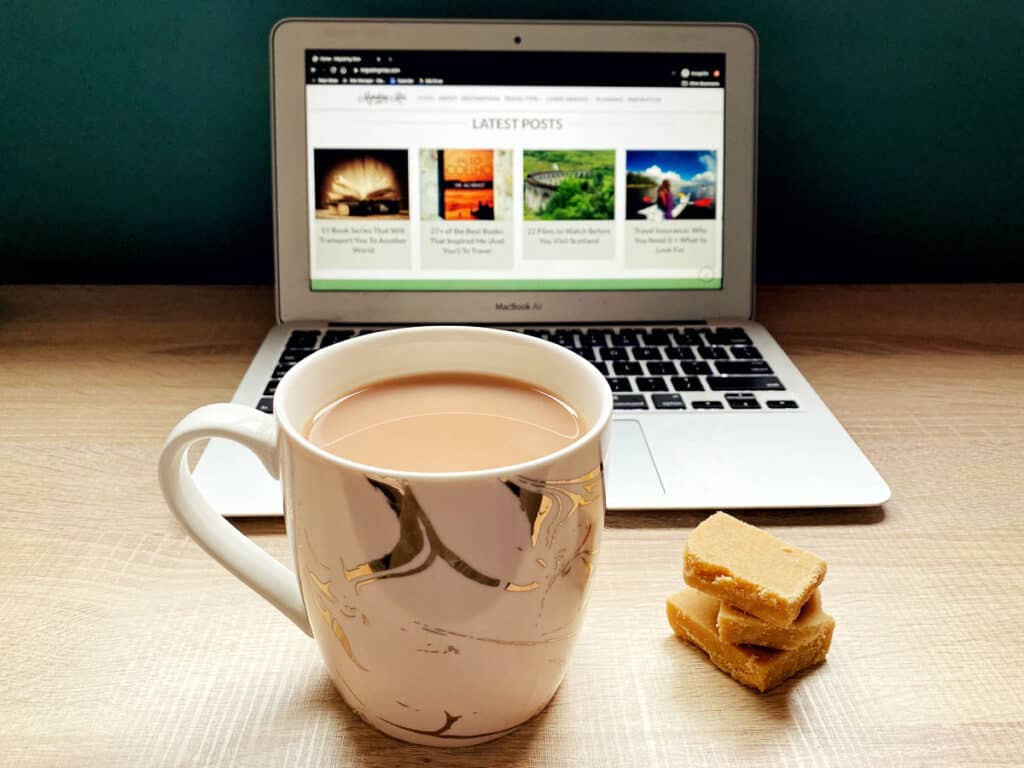 Is tablet hard to make?

I had my first try at making tablet one Christmas when we were visiting some of Phil’s family. His stepmother showed me her family recipe and with plenty of supervision, I helped to make it. She gave me a copy of the family tablet recipe but in all my moves abroad I unfortunately lost it!

I recently decided I wanted to give it another go on my own, so Margaret sent me “Aunt Grace’s Scottish Tablet Recipe” and here we are!

Scottish tablet was originally made with sugar and cream, but it’s now more commonly made with sweetened condensed milk and butter since it’s so easy to burn the cream. It still needs lots of attention so it doesn’t catch on the bottom of the pan so you won’t be multitasking while you make this one.

The recipe makes quite a lot and tablet always makes a great gift… if you can bear to part with it!

Don’t try to take any shortcuts with low-fat products! You’ll need full-fat milk and butter for it to work correctly. 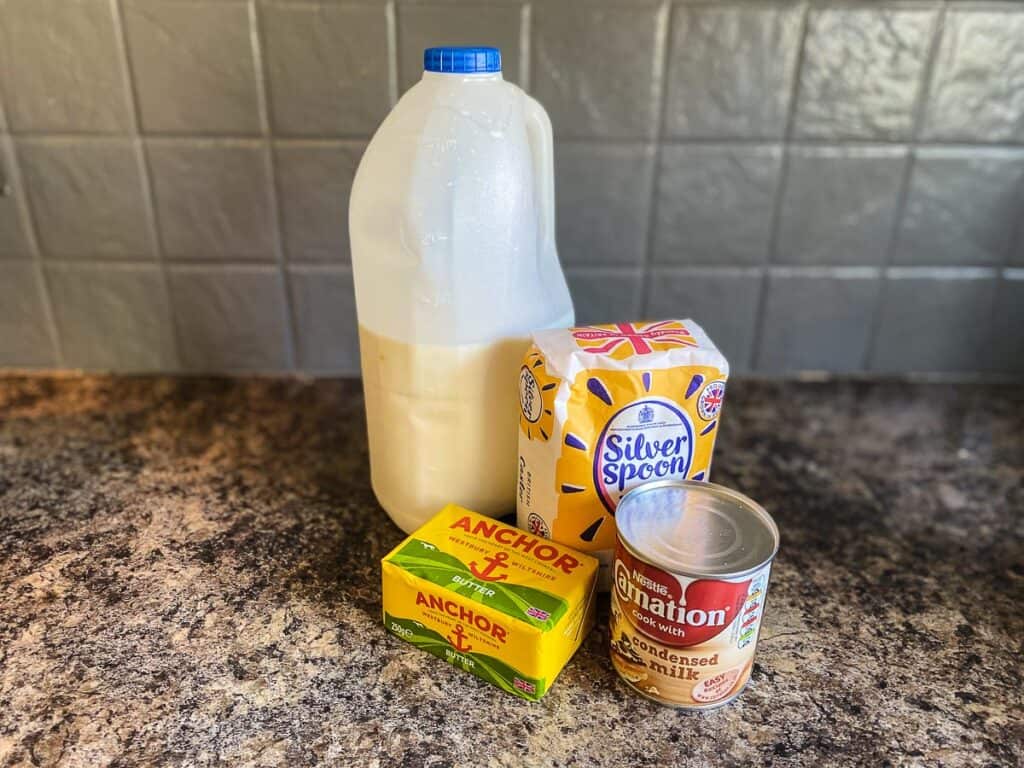 Here’s the main method, with step-by-step photos below and extra tips: 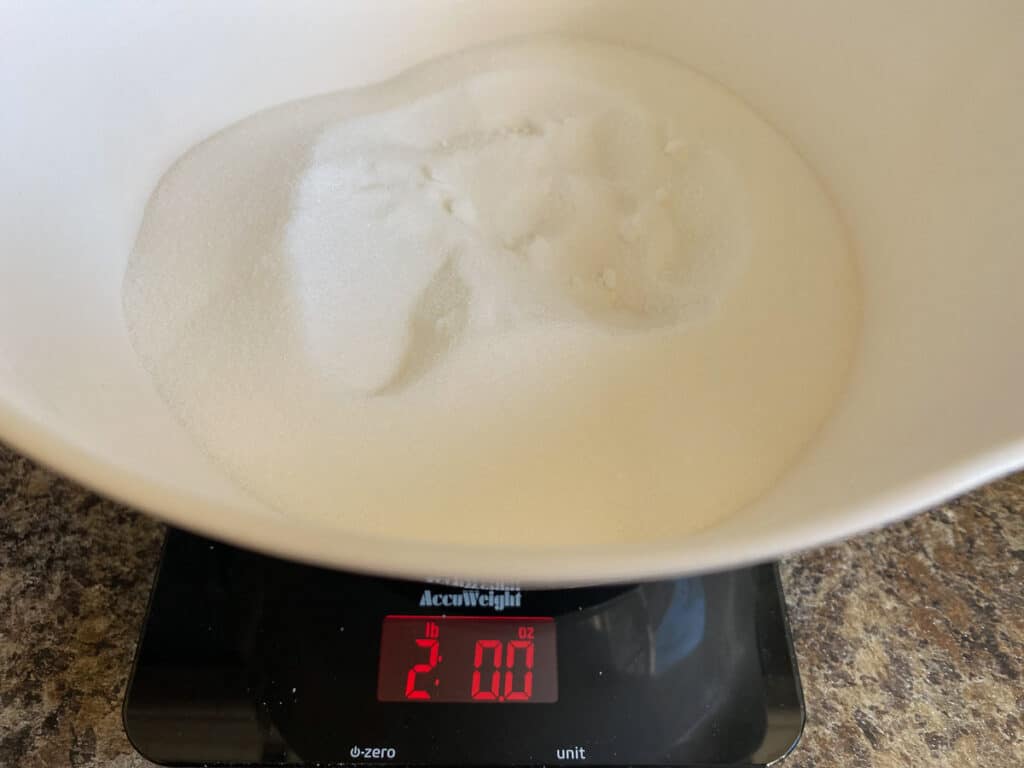 This is pretty much that whole bag of sugar you can see in the ingredients photo above… tablet is definitely not diet-friendly! But I firmly believe we all deserve a treat now and then so why not tablet?

Moving from New Zealand to Scotland and having lived for a while in the United States means I’m never quite sure what measurement system belongs where, so I’ve tried to put everything you might want above but let me know! I weigh things on the scales but you can also measure it out in cups if that’s what you prefer. 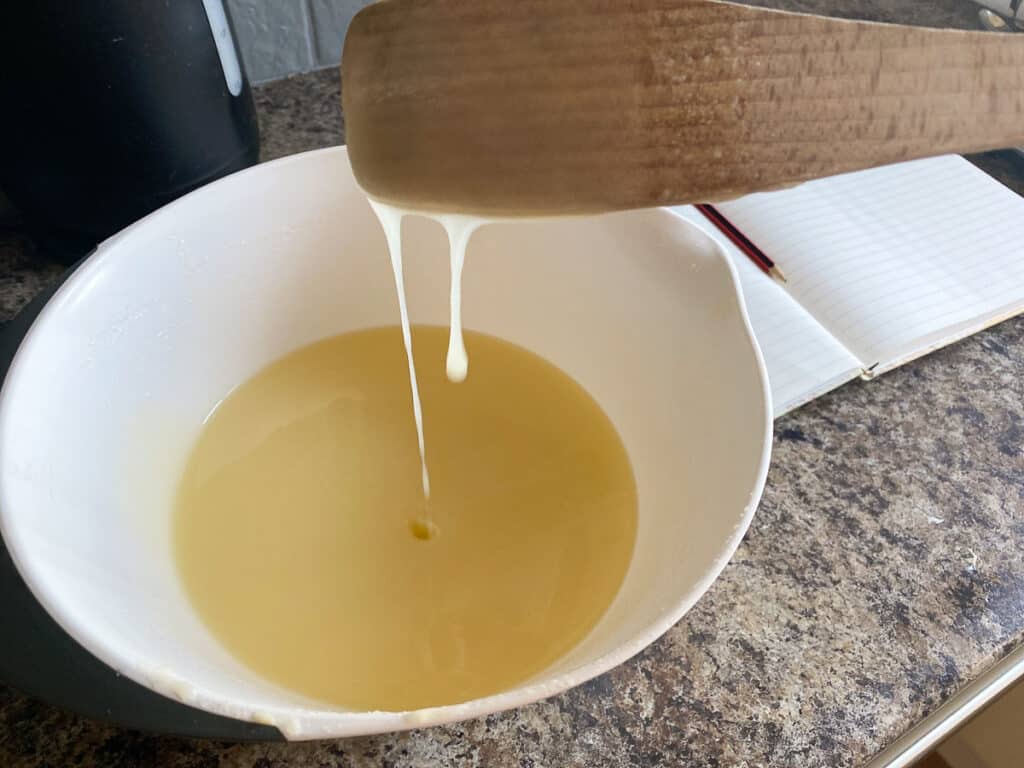 Margaret always melts the butter, sugar, and milk together in the microwave and I find that much easier too! You can put it in the pot you intend to use on the stove though and just melt it together on a low heat there, taking care to make sure it doesn’t catch on the pan or burn.

I have seen some other recipes use water instead of milk here but milk gives the tablet a much creamier taste! 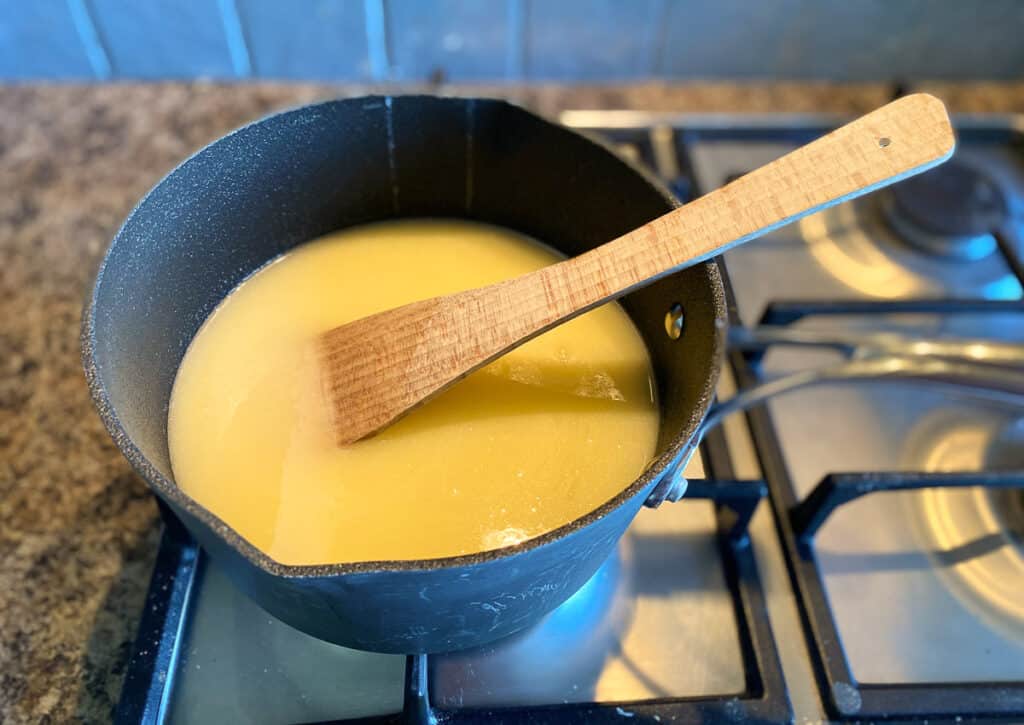 Definitely note that you should use a bigger pan than this! You’ll see why in the next photo…

This is the mixture once I had melted the first lot of ingredients together in the microwave and then added to the pan with the condensed milk. From here you need to bring it to a boil which is really important as if you don’t get the mixture hot enough the tablet won’t set properly later on. 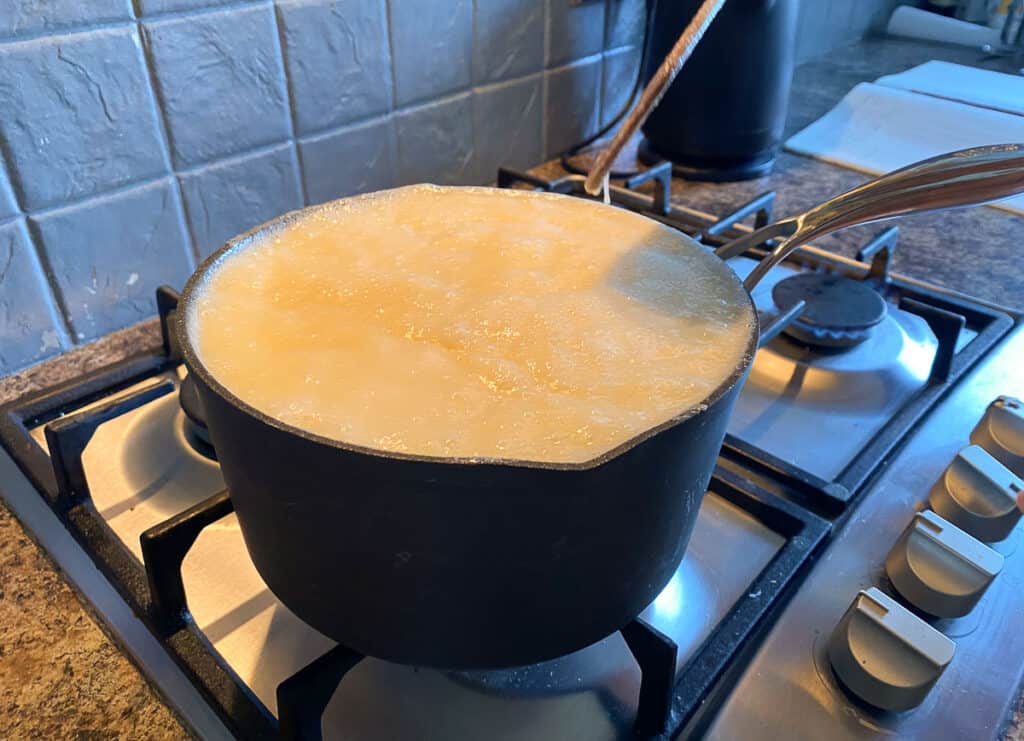 You need to have a big pot because as the tablet mixture rises in heat and comes to a boil it’ll expand. As you can see I only just managed to keep it in the pot! This first batch actually didn’t set the first time I poured it and I ended up putting it back again so that it would set properly.

If your tablet doesn’t set it is possible to rescue it by putting it back into the pan and bringing to a boil again, but it can sometimes mean it gets a little more cooked and won’t taste quite as smooth. The finished texture is usually a tad grainy but it then melts in your mouth and becomes smooth.

The recipe calls for a “brisk simmer” for 20 minutes which means not fully boiling but not on a low heat either. The mixture will come down a bit in the pan and you should keep stirring the whole time. You get a bit of a work out making tablet! 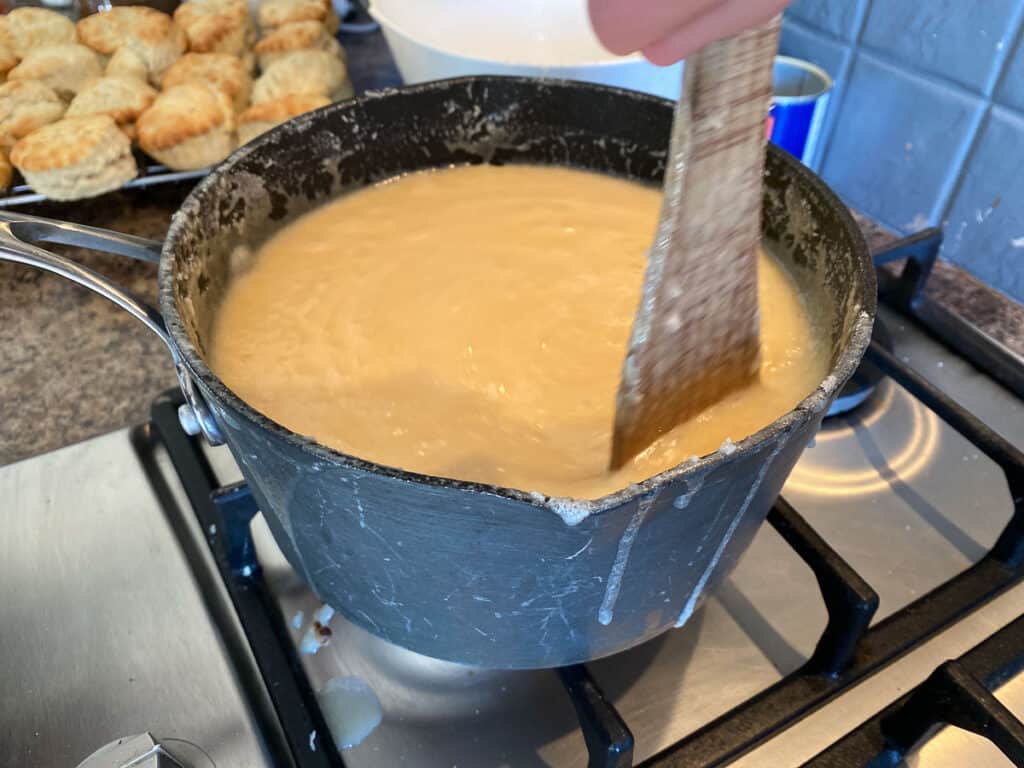 This is me continuously stirring the mixture. It will usually darken up a bit too. As with fudge, there are some tests you can do to see if you’ve got it to the right temperature, although I’ve never used them and you will just get to know that it’s right if you make it a few times (and why wouldn’t you?).

I did some research and the setting point is 120 degrees if you want to use a thermometer. This means you get it to that point and know it will set. Alternatively, you can do the drop test in a glass of water. Take a bit of the mixture with the spoon or stirrer and drop it into a glass of cold water and if it sticks together and forms a ball it’s ready.

As I said, you can add it back to the pan if it doesn’t end up setting, but it’s riskier and better to get it right first go! 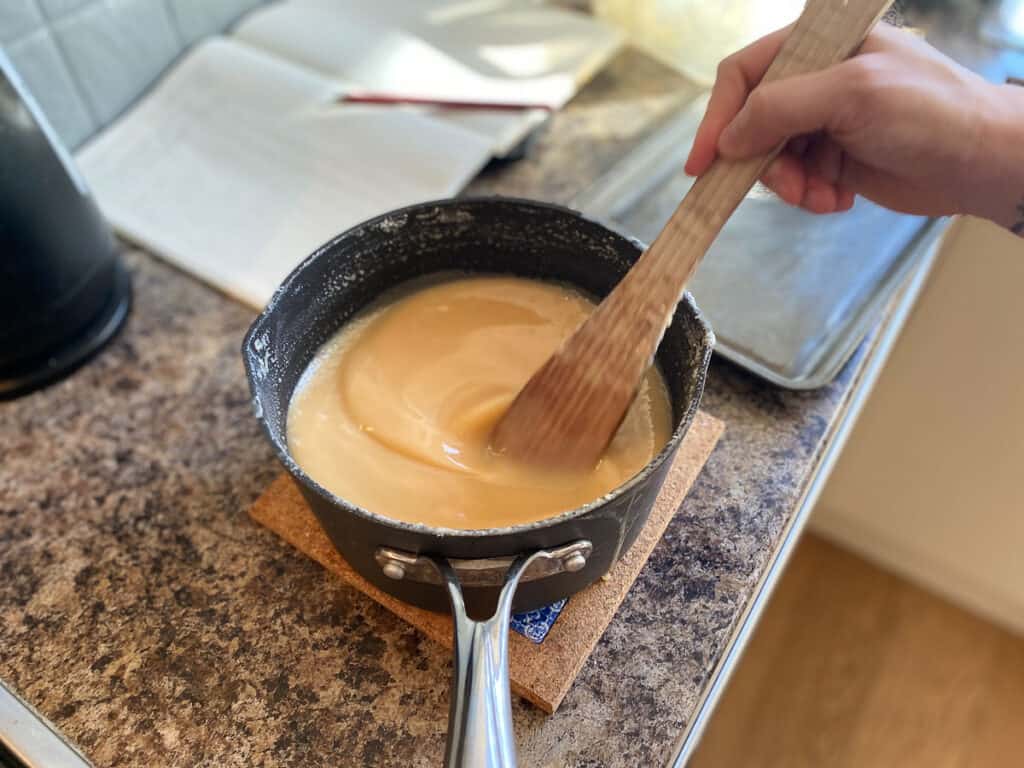 Once you’ve been simmering and stirring the Scottish tablet for 20 minutes you need to take it off the heat and beat it until it thickens up. Traditionally this was done with a wooden spoon and that’s how I’ve always done it too, but I know some people do use an electric beater as well.

At this point, you can also add some whisky (not too much just a bit for flavouring) if you want to make it even more Scottish! You will notice some recipes call for vanilla essence but traditional tablet never had it and it’s not really necessary.

The mixture usually darkens and thickens up and then you know it’s ready to pour! 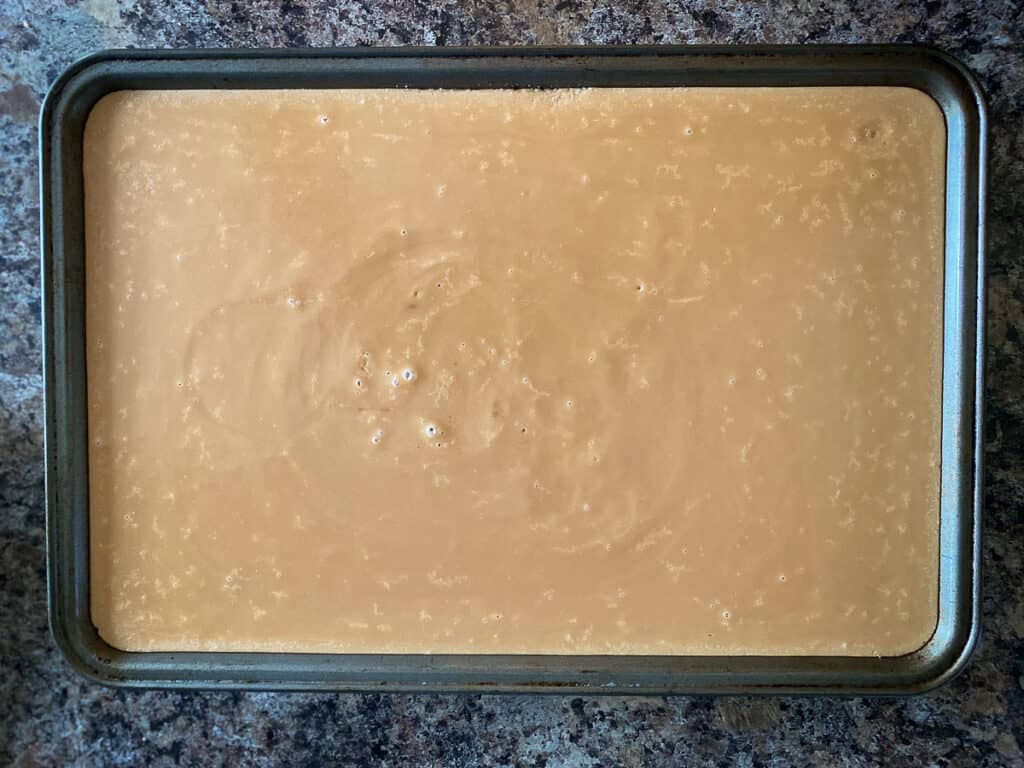 Whenever I’ve seen homemade tablet it’s been done in a greased tin like this, but you could also do it in a lined or greased baking tray or lasagne type dish. It depends how thick you want the pieces to be when you cut them later on. The mixture above is still hardening up.

After it’s been sitting about 20 minutes or so you can scour the top with lines for where you’ll cut later. This means you’ll get neater lines as it can shatter if you just try and cut it without the lines. 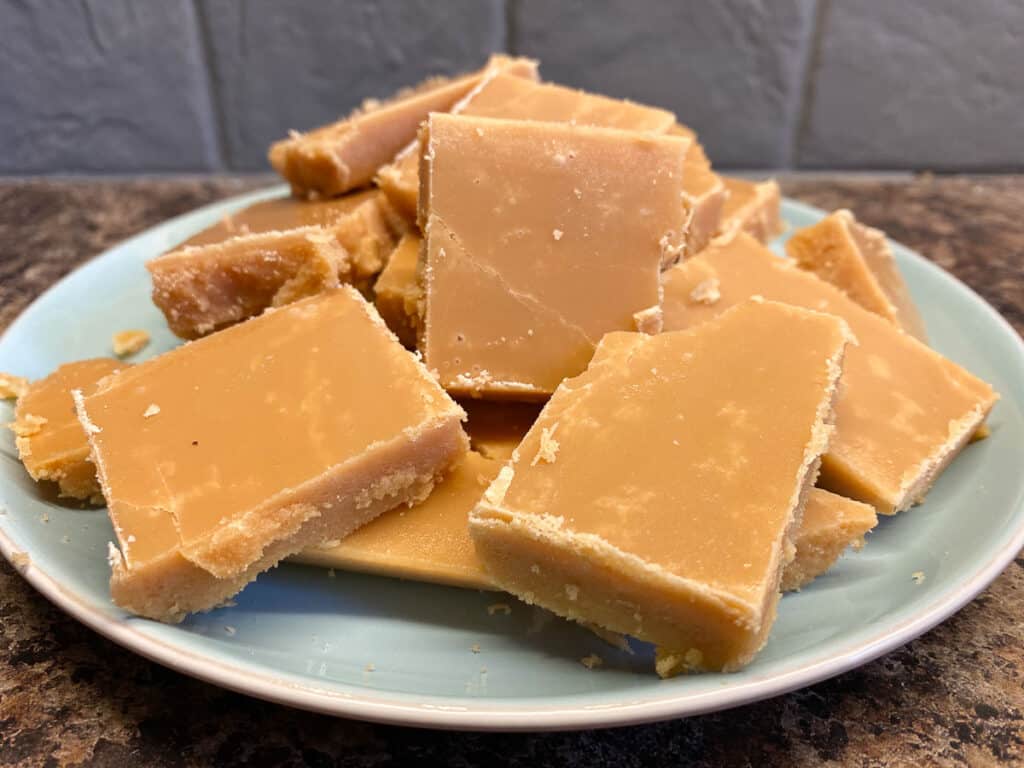 And that’s how you make traditional Scottish tablet at home! It sounds complicated but it’s really not too bad. You just need to keep an eye on it! I really hope my little step by step tips will help you out along the way too.

If you’ve enjoyed this please have a look at my Grandma’s scone recipe that I was recently allowed to share, she’d be very pleased to know people were baking her scones!

If you do decide to have a go at either recipe, tag me in your picture on social media (@migratingmiss), I’d love to see how it turns out!