What better way to spend my last weekend in the UK than on a roadtrip through the Scottish Highlands?

My working holiday visa had ended and I’d dragged out my stay with a tourist visa but the money was gone, so I had to be too. Before I left though, I was determined to take an epic road trip, hitting some of the top things to see in Scotland. If you have a car it’s easy to see a lot of Scotland in a short amount of time, and many of the best things to see in Scotland are within easy driving distance of each other.

I’d already been on a roadtrip to the Isle of Skye via Loch Ness for my birthday the year before, driven from Edinburgh to Saint Andrews for a day, travelled to Tarbert to stay in a castle for the night and been from Edinburgh to Inverness and back again, but I still wasn’t done with this country by a long shot. For this weekend away roadtrip I decided to go back over a few of my favourite  Scottish places, with some new ones thrown in too. There were things I just had to see in Scotland before I left!

Your mother was a hamster and your father smelt of elderberries!

There are countless castles in Scotland (I tried to look up how many, apparently it’s impossible) so why include Doune Castle on a list of top destinations in Scotland? Well, Doune Castle is located between Edinburgh and Stirling, so it made a good start to the trip. It’s the kind of castle that isn’t crowded and you can run all over without barriers. Plus, it’s where Monty Python and the Holy Grail was filmed!

We pretty much had the whole thing to ourselves, much like when I went to Blarney Castle, so it was really fun to explore.

On through Glen Cloe

Look at any list of top places to visit in Scotland and Glencoe will have made it. Located on the main road north to Fort William, this stunning area is the remains of a super volcano. What’s left behind is some of the best scenery in the world (I think so). The glen is surrounded by rugged mountains and ridges, the most famous probably the Three Sisters, three ridges next to each other.

For James Bond fans, a side trip to Glen Etive and Loch Etive means coming across a lot of the scenery from Skyfall. Even if you’re not a fan, it’s worth the drive through this beautiful area.

Back in 1692 after the second Jacobite Uprising a massacre took place in Glen Coe. The clan MacDonald provided hospitality in highland tradition to guests who then murdered them and burned their homes, leaving them to die from exposure. This was under order from the King as the MacDonald’s were seen as Jacobite sympathisers, although later it was blamed on clan rivalry. A wreath is still lain at the site every year by the Clan Donald Society of Edinburgh.

We based ourselves at Lodge on the Loch Hotel just South of Fort William. This area has  great access further into the highlands and wasn’t too far to drive from Edinburgh (or Glasgow). I usually prefer to stay in the country and with the views in Scotland who wouldn’t?! Most of the rooms at the lodge have a great view over Loch Linnhe, although our first room was a bit orange (it was called the Terracotta Room…) and we asked to change to a different one so we could enjoy it more!

Fort William is the second largest town in the highlands after Inverness, and while many of the top things to see in Scotland can be accessed from Fort William I preferred staying out of the city. Go just a short distance from Fort William and you can be climbing Ben Nevis (when the weather is good enough!) or drive to Loch Ness, the Isle of Skye and countless other highlights of Scotland. So that’s what we did!

Stopping at the Commando Memorial

Just under 20 minutes drive northwest of Fort William is this monument is dedicated to the British Commando Forces from World War II. The monument overlooks these elite infantry soldiers old exercise ground, where some of the most innovative and tough training of soldiers at the time took place. It’s a simple but moving memorial depicting three Commando soldiers overlooking the rugged terrain they trained in and onward to Ben Nevis, the highest mountain in the British Isles.

Nearby is a garden of remembrance that holds the ashes of many of the original Commandos from WWII and has since become a place of dedication for contemporary Commandos from recent conflicts like Afghanistan and Iraq.

Just like Glen Coe often makes the list of top places to visit in Scotland, so does Eilean Donan Castle. It appears on calendars, biscuit tins, keyrings, you name a souvenir and it’s there. After Edinburgh Castle, it is probably the most recogniseable castle in Scotland and one of the most picturesque, situated at the meeting point of three lochs. And I love it. So for the third time in my two years in the Scotland I found myself standing on the shore taking in the breathtaking view of Eilean Donan Castle. I’ve been lucky enough to see Eilean Donan Castle in all kinds of weather,with the tide in and out, in rain and sunshine, and I’ve found it to be breathtaking every time.

To make it even better the drive to Eilean Donan Castle is second my favourite in Scotland, following super closely behind the drive through Glen Coe. A meandering road through a deep valley with the chance to spot elk and goats (yes, wild goats), winding past various lochs, before rounding a corner to be blown away by the view of Eilean Donan Castle. It’s a drive I would gladly do again and again (and I have!).

A 20 minute drive further north from Eilean Donan Castle puts you in the village of Plockton. The road might as well be one one it’s so narrow. There isn’t an awful lot to see in Plockton, but it makes a perfect lunch stop and it’s a beautiful place to include on any Scotland roadtrip.

Visiting the Isle of Skye

The Isle of Skye was so close and I couldn’t resist a quick drive over, just to set foot on this mystical island once again. The last time I didn’t get a clear view of the Cuillin Mountain Range because of the mist, and unfortunately the short days of February put a stop to me seeing them once again. I’ll just have to go back right?! If you set off early from near Fort William, of if you’re travelling in the warmer months you’d have the daylight to explore plenty of Skye before heading back to base.

After the delights of villages like Plockton the bustle of Oban seemed overrated. It’s a pretty town, but the main street is full of Boots, Superdrug, and the like. You could almost be anywhere. I’d been through before and discovered some awesome fish and chips so I’m sure there are treasures to be found! This time around it was a quick stop  to take in the views over Oban from McCaigs Tower.

I’ve seen standing stones in the Shetland Isles, and I’ve been to Castlerigg, a famous stone circle in the Lake District, but I was yet to see a stone circle in Scotland. Due to a certain book series (read: Outlander) I was a little obsessed with the prospect.

Many of the stone circles in Scotland are on the outlying isles like Orkney and the Outer Hebrides, but my determination to see one before I left Scotland the next day had me frantically searching google and driving a little out of the way (maybe a lot) to the small town of Kilmartin.

This small village west of Glasgow has over 350 prehistoric monuments within 6 miles, the perfect spot to see a stone circle in Scotland! Maybe not the most impressive, but one nonetheless, and the nearby church with ancient Celtic gravestones was worth a look too. I’m a fan of visiting places a little off the beaten track as well, and everywhere else on this trip was fairly standard so this was it!

It wouldn’t have made for such a long drive back to Edinburgh though, if the GPS didn’t decide I needed one last look at the very centre of the city in peak hour traffic. What should have been an easy drive bypassing Glasgow turned into a stop-start nightmare through the middle!

There are so many great top destinations in Scotland that I didn’t make it to on this trip, but for me it was a perfect weekend road trip to end an amazing two years living in this country. I managed to squeeze in many of my favourite places in Scotland, and a few new ones too!

Have you taken a road trip in Scotland, or been to any of these places? 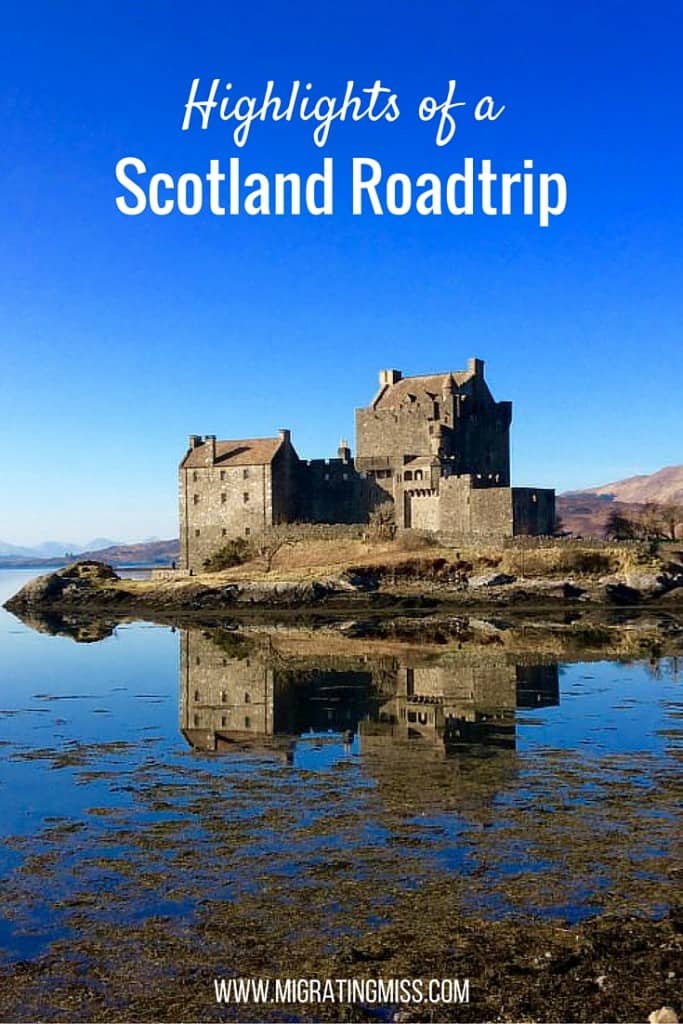