If you know anything of Granada, it might be about the Alhambra, Flamenco or the Sierra Nevada, but there’s a more hidden gem in this beautiful city in the south of Spain. Look at the top things to do in Granada and you may not see the street art in Granada on the list, however!

So why not? The street art in Granada is a little controversial and the residents have divided opinions over it. So it’s not something that’s always listed as a reason to visit the city. But all it takes is a wander through the Realejo area near the Alhambra and it’s hard not to stumble across graffiti. This isn’t just any street art though, it’s the graffiti of Granada at it’s finest. 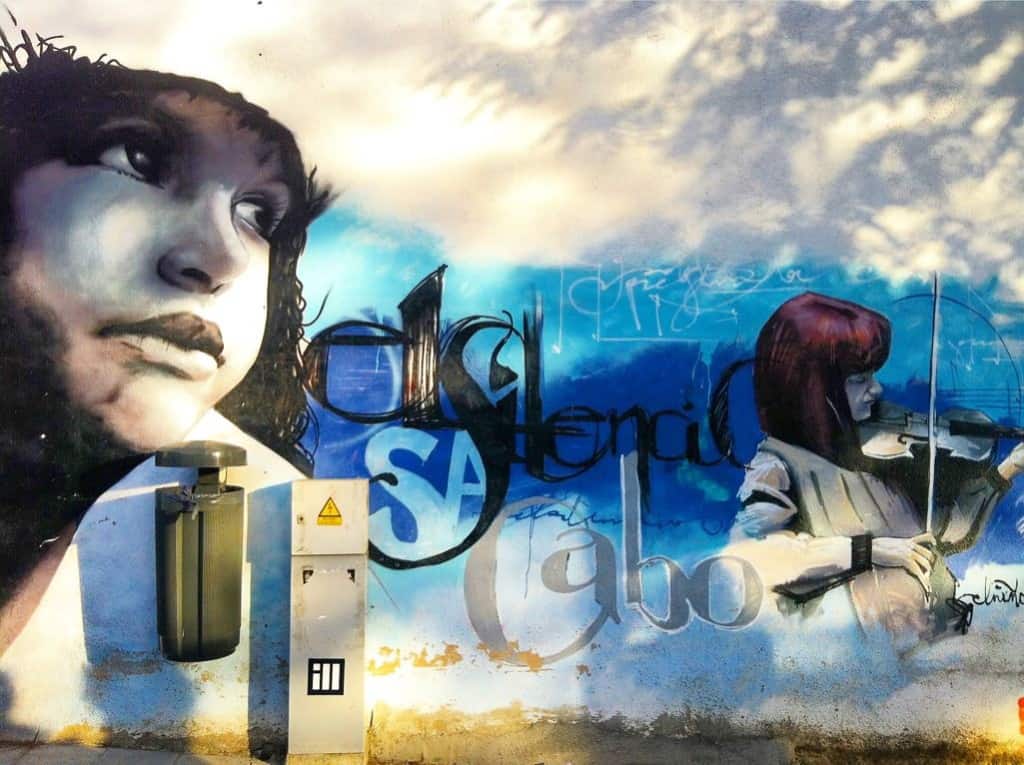 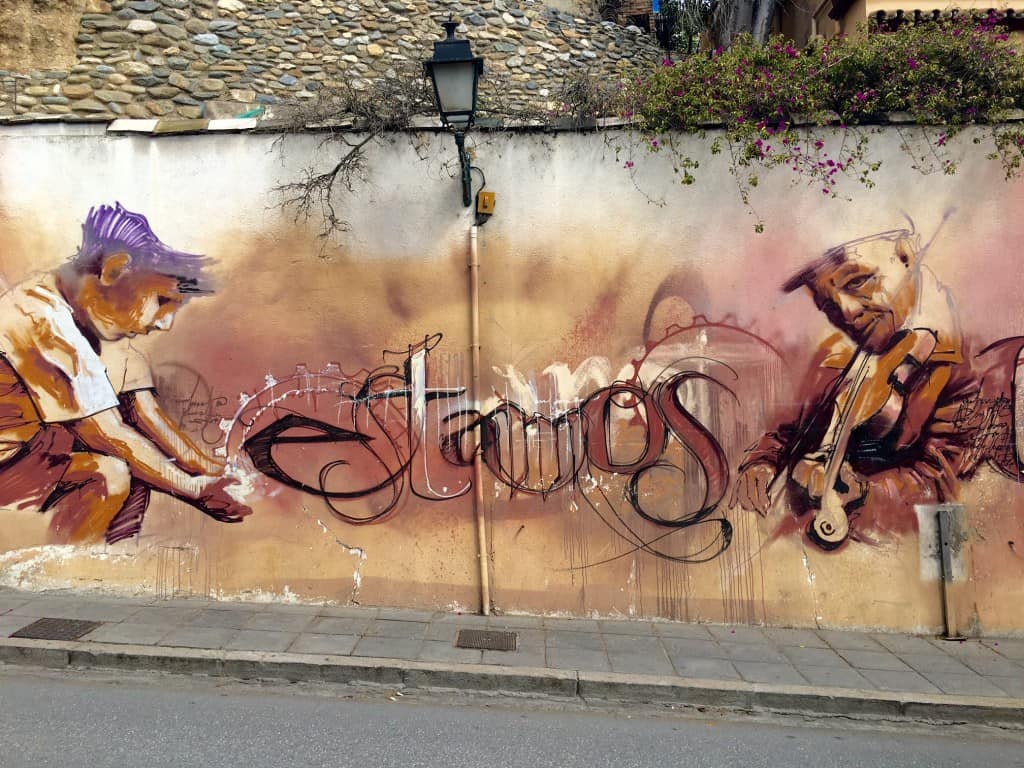 Who is Granada’s Street Artist?

Nowadays many cities have embraced graffiti instead of trying to paint over it, as long as it’s more art than straight tagging. Hence the name, “street art”. Some cities even commission graffiti or street artists to paint things in their city.

The artist of much of the graffiti in Granada has been around for awhile, from the 1990s, and he goes by El Niño de las Pinturas, real name Raúl Ruiz. Some call him the “Banksy of Spain” because they consider his work to be more art, like Banksy, than graffiti. 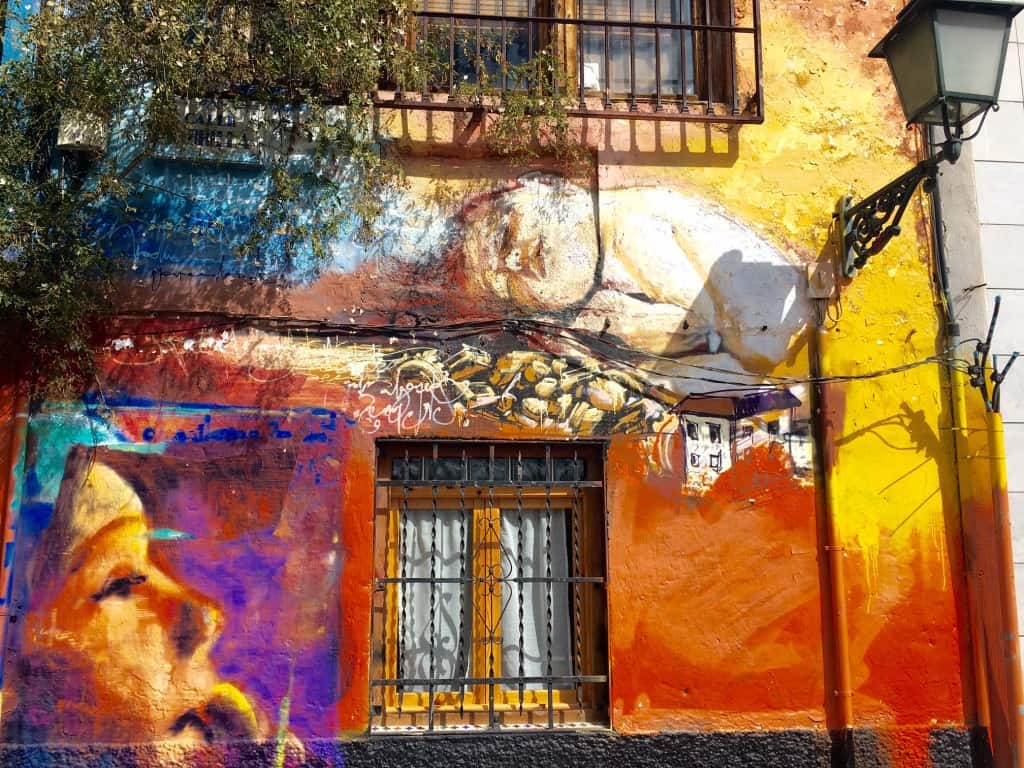 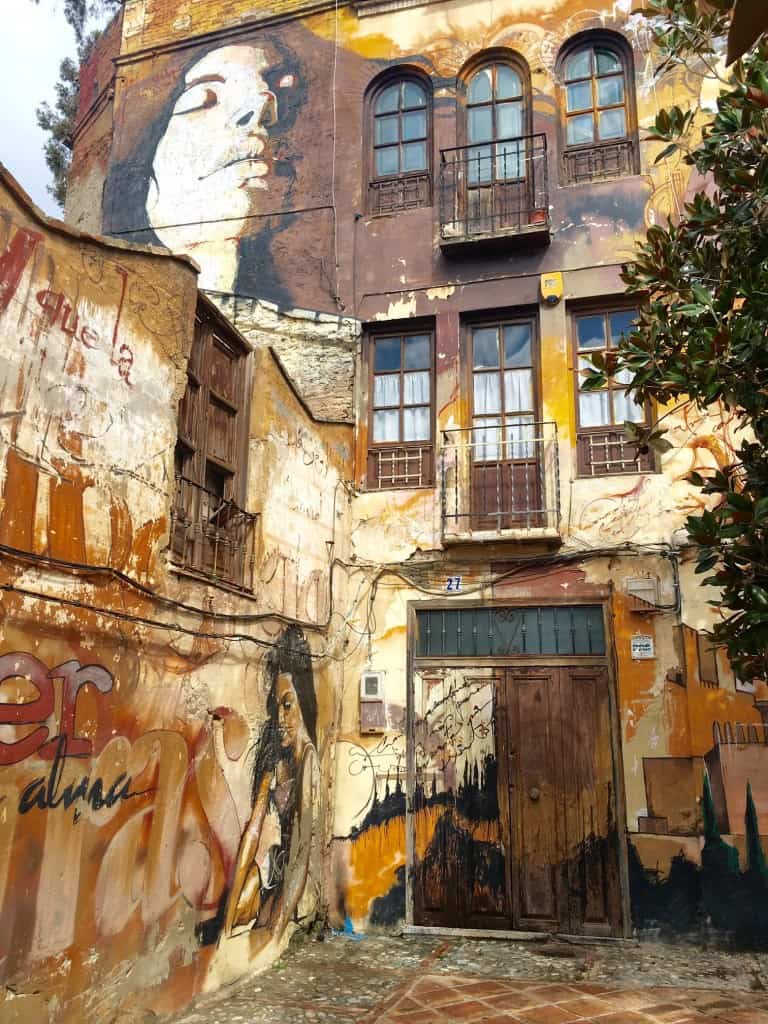 I fell in love with El Niño’s street art on my first visit to Granada and the second time I hunted it down once again. I was happy to see most of it still intact and some new pieces as well. It’s definitely worth taking the time when you’re in Granada to find some of this awesome street art.

What I love about the graffiti of Granada and especially El Niño is the people pictured in them. Their eyes and expressions draw you in. The street of Granada and El Niño looks more like a watercolour painting than graffiti.

How to find street art in Granada

Most of the graffiti in Granada is located between the river and the Alhambra. If you walk west along the river until you reach the bridge of Calle Puente Verde, then head up to the left and you’ll stumble straight across an abandoned house that is fully painted in graffiti and street art.

Right next to it is a small plaza named after Joe Strummer, the guitarist of The Clash. Granada and Spain influenced the song Spanish Bombs on the London Calling album and Joe Strummer later moved to Spain. This is actually found on Google Maps so you’ll be able to look it up for a reference point if you need one. 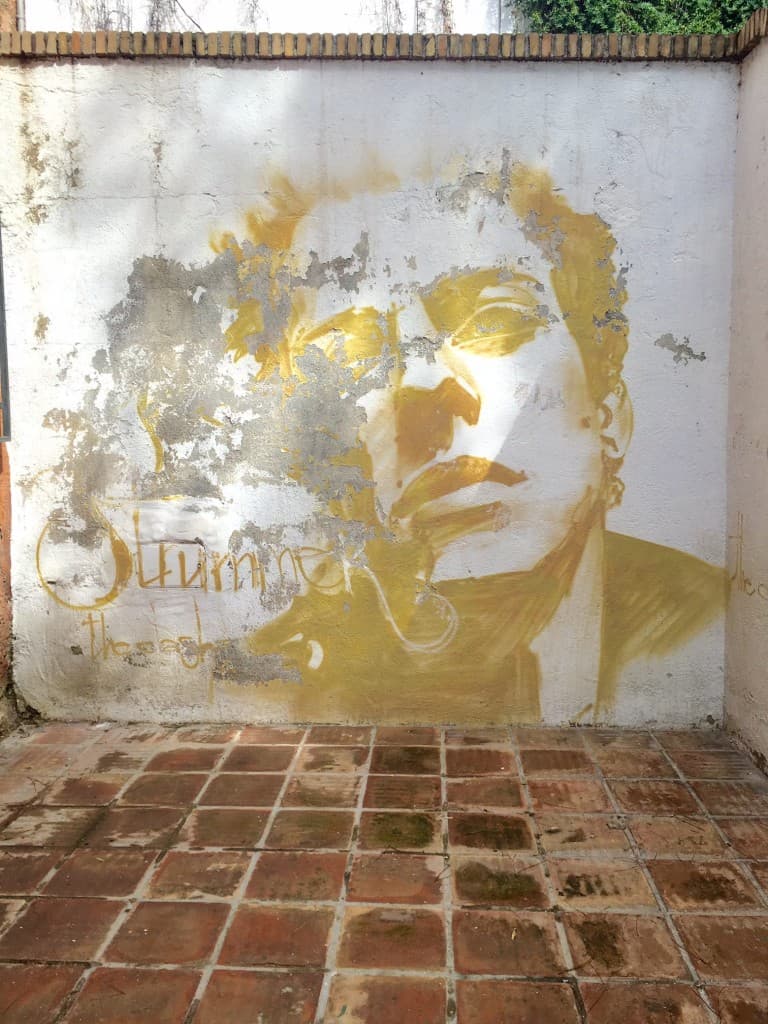 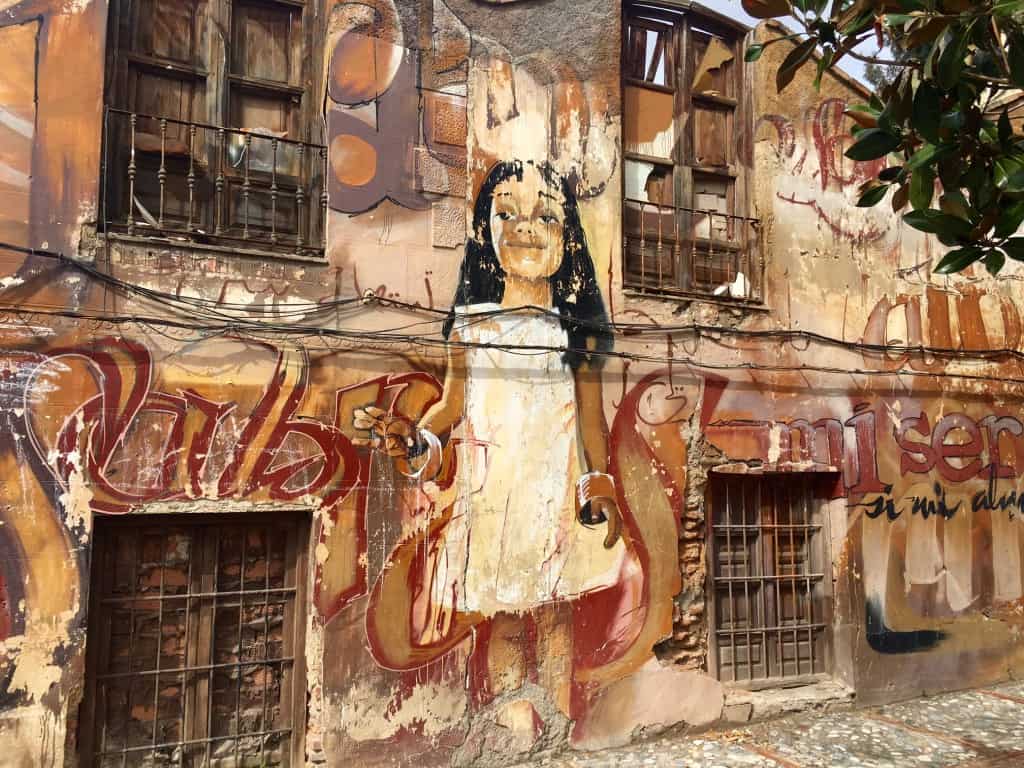 Just above this on the corner of Calle Barranco del Abogado is another house that’s fully painted with graffiti.

Head back down to Plaza Joe Strummer and then up Calle Vistillas de los Ángeles, you’ll know it’s the right place because of the graffiti on the righthand side of the street.

Take a left at Cuesta del Caidero to see more Granada street art. If you continue up this way you’ll reach the Alhambra and the free gardens next to it.

If you just visit the above locations it’ll give you a great overview of the street art in Granada, but if you’re craving more head to the Realejo quarter when the shops are closed and you’ll also see a lot of graffiti on the pulled down shutters.

To find Realejo, instead of heading up Cuesta del Caidero to the Alhambra continue straight on Calle Molinos and you’ll see more art on a few corners and the street shutters. At the end take a left to Plaza del Realejo and then a right to spot some more large pieces. 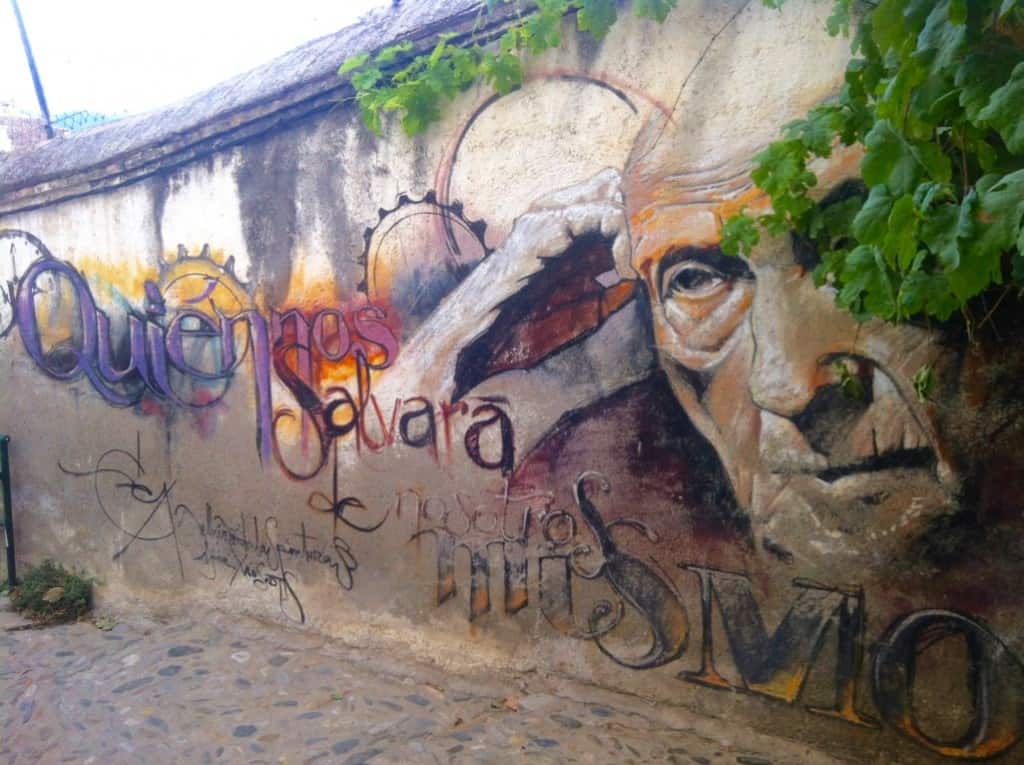 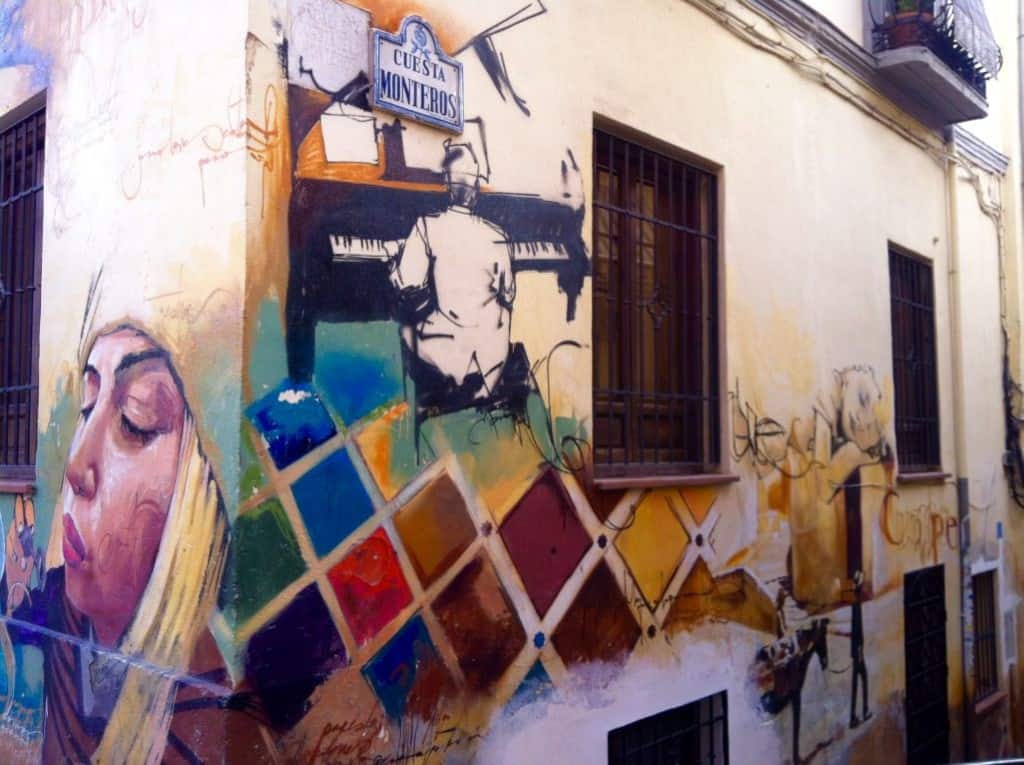 There’s much more hidden around this area and it’s always changing, so keep hunting, or drop me a message and let me know specifics if you find anything great!

Is graffiti in Granada a good thing?

Street art in Granada isn’t without controversy. The government has at times painted over or made artists paint over their work, especially in the historical neighbourhoods.

I love the street art in Granada, and I think it adds another element to the historical nature of this city. It bridges the gap between the ancient inhabitation and the wonderful history of the city and now. I think when it’s done in the right places and especially with the permission of property owners then there is no harm, and actually a benefit to the city. 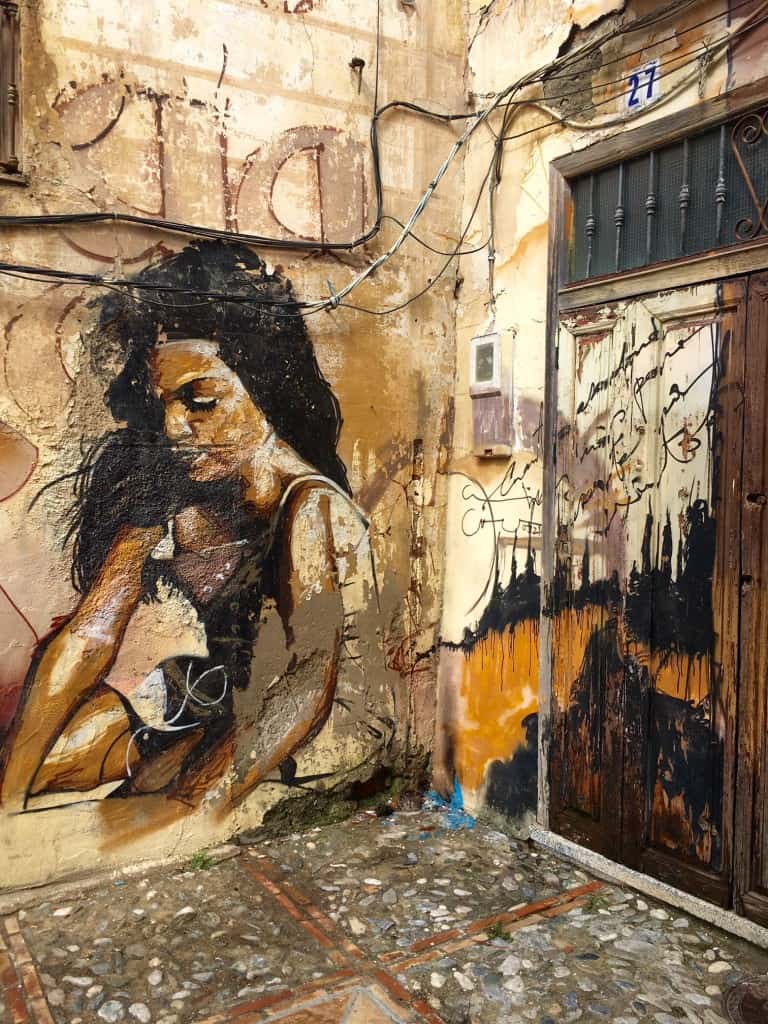 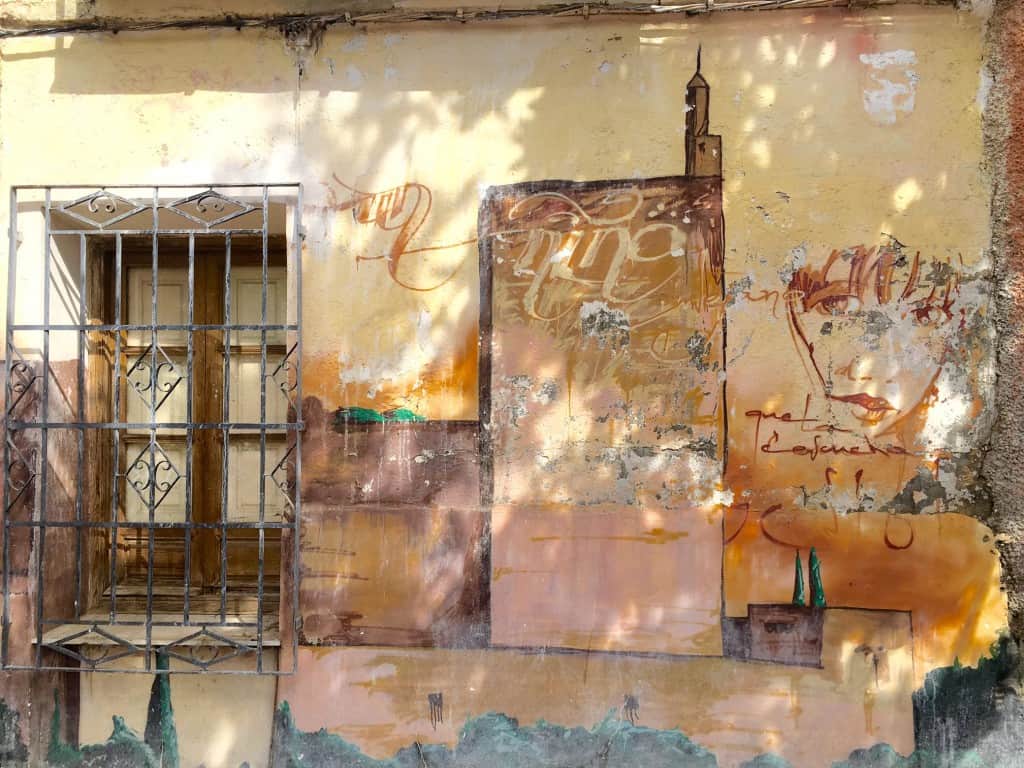 What’s your take on graffiti or street art, good or bad? Should it be in historical places like Granada or just in more modern cities? Have you ever taken a street art tour or deliberately went looking for graffiti and street art in a city you visited? Let me know! 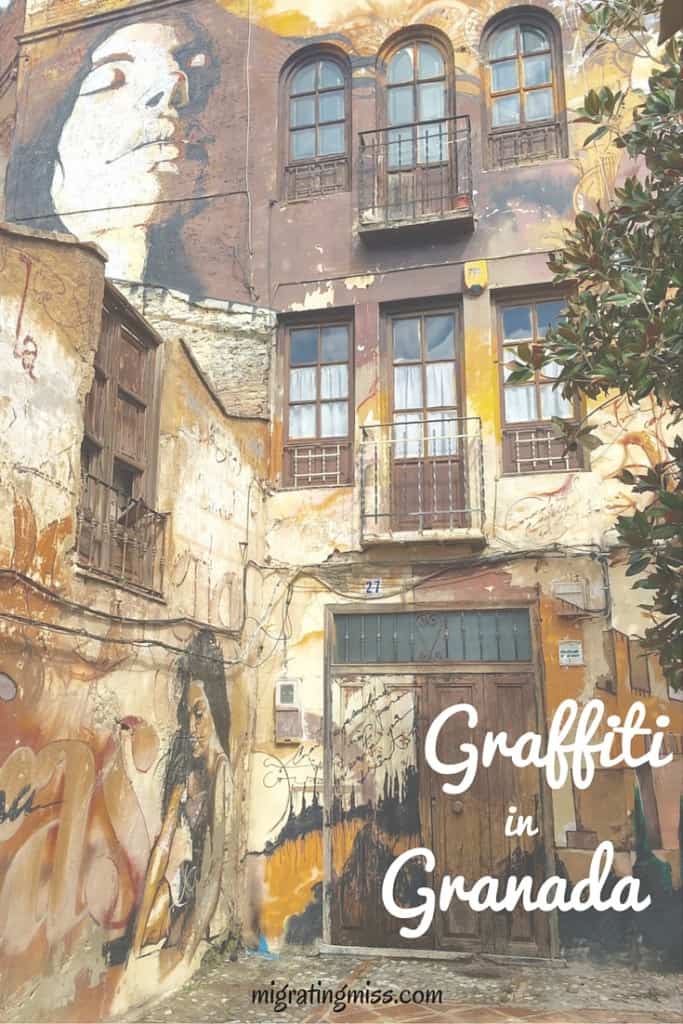 18 thoughts on “Finding Graffiti in Granada: The Street Art Gallery of Spain”