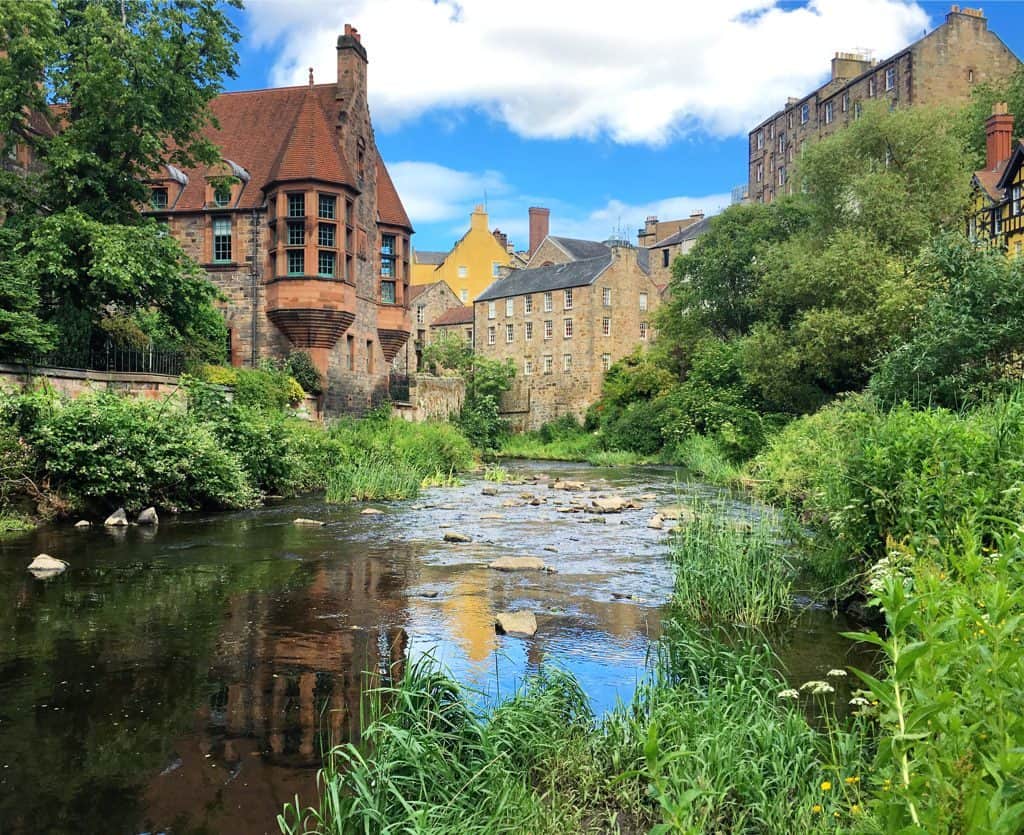 There’s no doubt that Edinburgh is a popular destination for travellers and expats alike, with lots of things to do, but have you discovered Edinburgh’s hidden gems?

I’m so excited to be living in Auld Reekie once again, and I can’t wait to get out and explore these old streets even more, especially the more of lesser-known spots that only the locals know!

Here are some of my favourite places to visit of hidden Edinburgh that I already know.

Some of these you might find on long lists of the top things to do in Edinburgh and if you’re only staying in the city for a short time these things may not rank as essential sights in Edinburgh. But they’re definitely Edinburgh hidden gems well worth getting off the beaten path for!

Restaurants, pubs, cafes, and bars on the canal in the north of Edinburgh wouldn’t be out of place in many European destinations, except for the very British look of buildings! If you want to get out of Edinburgh’s city centre and see what some of the rest of the city is like then I’d recommend a trip down to the Shore.

What was once a bustling port area is now a great place for a night out or a daily stroll. I love Mimi’s Bakehouse in the day for their delicious cakes and the nearby Roseleaf Pub for their unique brunches and cocktail teapots.

Not far away from these, you can find a classic pub at Teuchters Landing with a beer garden (one of many in Edinburgh!) on the canal itself, and if upmarket is your style then there’s The Kitchin, with it’s Michelin Star. Who knew all these great places to eat were just to the north of Edinburgh’s centre, in such a pretty setting?!

I think I came to the Shore once when I lived here on a working holiday visa, so I’d definitely say it’s more of an Edinburgh hidden gem for newcomers to the city, and tourists. Now, it’s one of my favourite spots in Edinburgh! 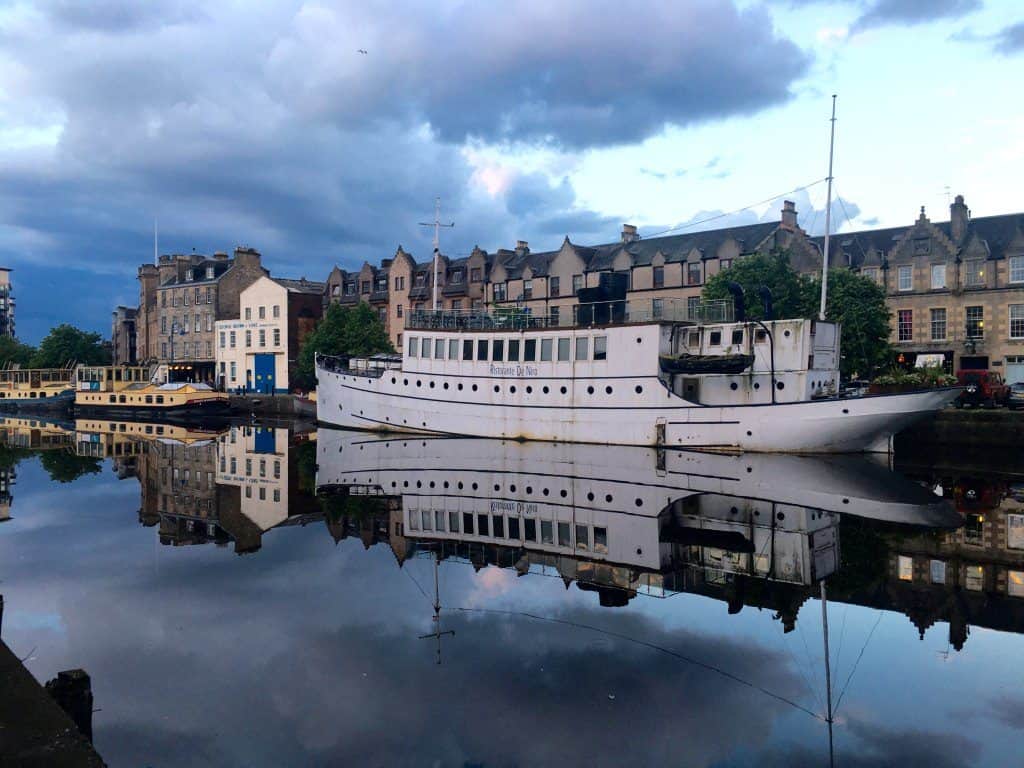 It’d be easy to miss these gardens that have been around since the 17th century if you didn’t know they were there because usually there’s just a simple gate and a small close leading to them. But they’re one of the best secret things to do in Edinburgh!

Next time you need a break as you walk between Edinburgh Castle and Holyrood Palace, keep an eye out for this little part of hidden Edinburgh!

Dean Village used to be one of the best secret places in Edinburgh! While this one of Edinburgh’s hidden gems may no longer be as “hidden” as the others, it’s still a welcome escape from the hustle and bustle of the busy Edinburgh centre.

It’s just a 10 minute or so walk from the end of Princes Street, but it feels like you’ve stepped away from the city and into a quaint village! It too used to be an industrial area, full of mills powered by the Water of Leith and old industrial buildings. Some of these can still be seen today, most notably Well Court, which was built originally to house workers.

Take a walk down to this hidden gem to see yet another side of Edinburgh, and you’ll feel like you’ve been transported back in time. 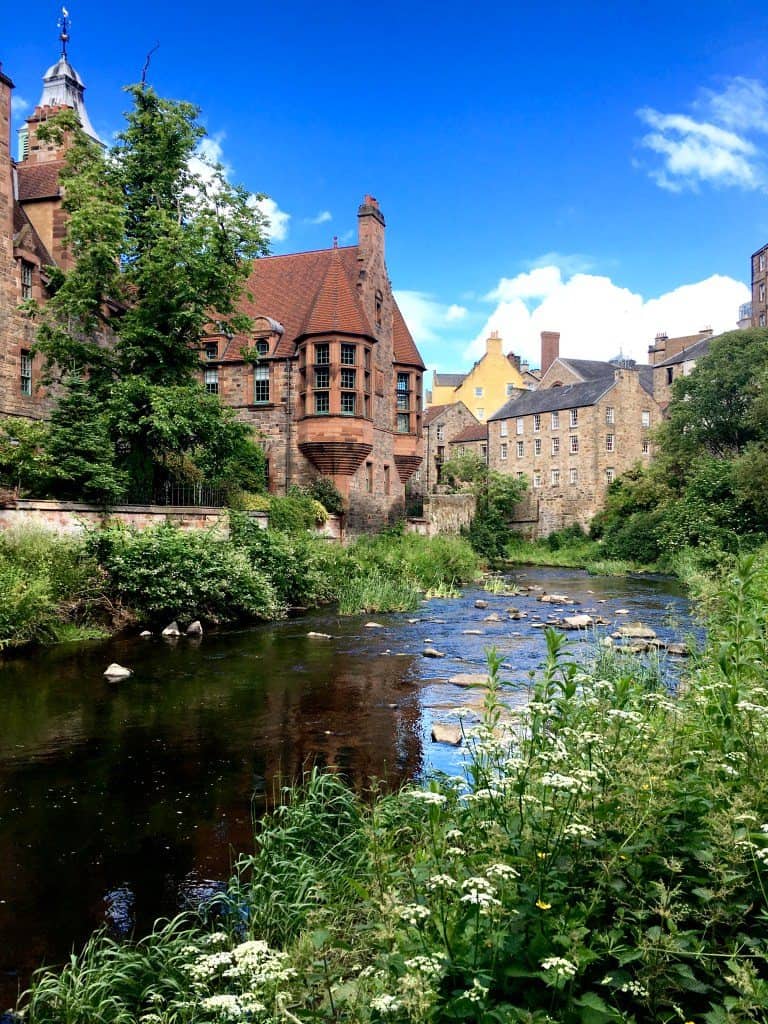 You might not realise it, but Edinburgh does have a river running through it, and it’s called the Water of Leith. It runs from the Pentland Hills to the port in Leith.

The part that runs through Edinburgh goes through a variety of places, through Dean Village and Stockbridge and all the way down to the Shore. Dean Village used to be one of the best secret places in Edinburgh, but as I mentioned, the secret is out and you’ll now often see a few people there taking photos.

It’s still worth a visit, however, and I can highly recommend a walk along the Water of Leith to discover other monuments and beautiful spots that are still part of Edinburgh’s hidden gems.

Unless you love walking and want to get back to nature without having to get out of the city, you may not really come across the Water of Leith. But it is a great way to go between different areas of the city if you have the time!

Head north of Princes Street and you’ll find yourself going down to a neighbourhood called Stockbridge. It’s another place that has all the charm of a village. It’s full of speciality shops, great cafes, and restaurants, one of my favourite places to pop in for a drink is Hamilton’s Bar and Kitchen.

On Sundays, there’s a fantastic food market where you can sample delicious street food from around the world or come away with locally produced goods like cheese or cake (and who doesn’t love those!).

It gets busy here on the weekends, but I love the vibe of the area and if you’re looking for somewhere to visit in Edinburgh out of the city centre and the tourist buzz then it’s a nearby and great option.

Plus, don’t miss a walk down Circus Lane, definitely one of the most picturesque streets in Edinburgh and a wonderful secret spot to walk down!

It seems like most of Edinburgh’s hidden gems or lesser-known places are related to its industrial past, and the Union Canal is no different. It was originally built to bring minerals, including the coal that darkened Edinburgh’s sky, close to the city centre.

Now it’s a place that’s well-frequented by locals walking their dogs, exercising, or taking their children to different parks along its route. 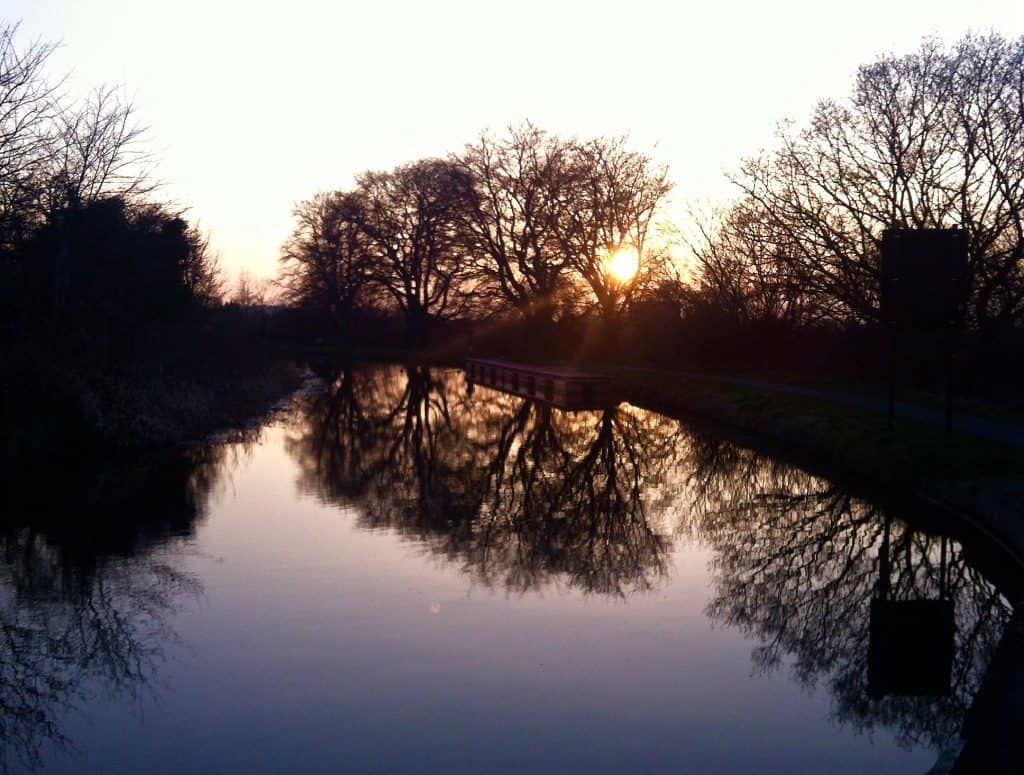 Ok, so I know you don’t exactly go to Edinburgh for the beach! But Portobello is a cute little seaside suburb that’s worth a visit if you’re not familiar with the UK seaside or, to be honest, even if you are.

Citizens of Edinburgh may not class it as a hidden gem, but I think as far as tourists hotspots go it’s off the beaten track and well worth a visit.

Portobello has a traditional promenade and a penny arcade (please tell me I’m not the only adult who gets excited by these). Even on a rainy day, the colourful houses at the end of the promenade look charming, and you can duck into the Espy pub for one of Edinburgh’s best burgers, while you enjoy the view across the sea to the east.

Cramond Island, one of the islands in the Forth of Firth, the stretch of water between the north of Edinburgh and Fife. What makes Crammond special is that at low tide a concrete pathway is exposed and you can walk to the island and back.

It may have once been a Roman outpost before it was later then used for farming as seen by the remains of a farmhouse there. Cramond was fortified during World War Two in the event that warships might try and enter the channel. Some of those buildings are still there and can be explored, although creepy dark buildings aren’t really for me!

Walking across to Cramond Island is definitely something a little different to do and it’s one of my favourite Edinburgh hidden gems. Just look at the tidal times carefully and keep an eye out, people have been known to get stuck over there for the night! 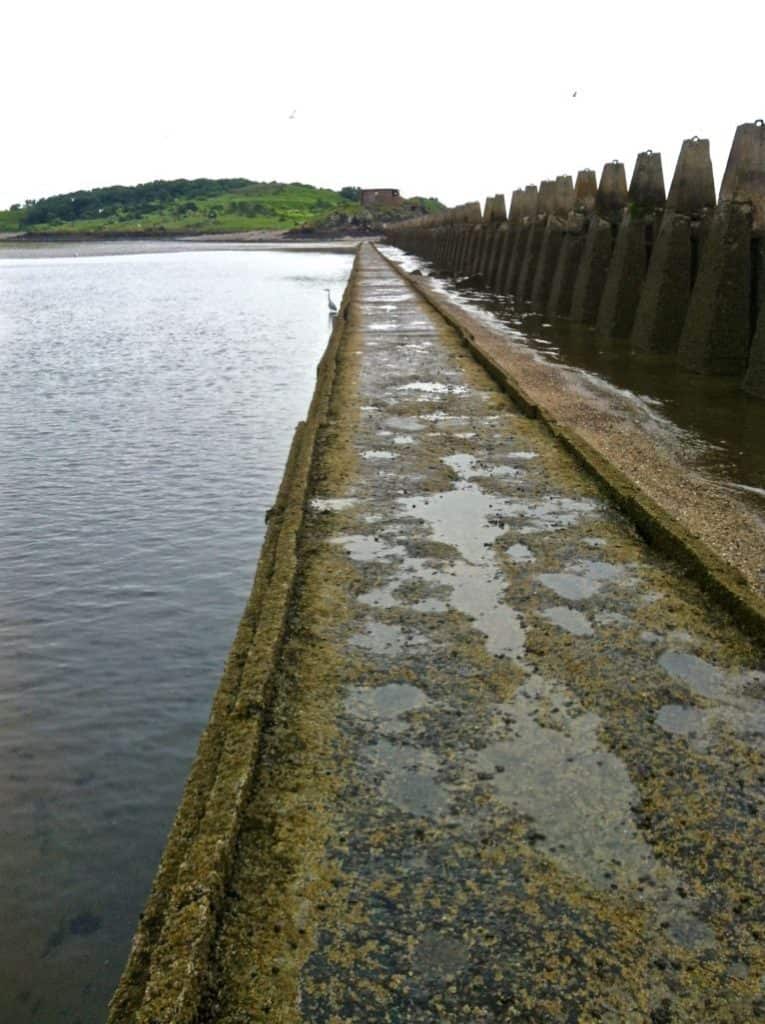 You can explore the cove on one of Edinburgh’s underground tours, except unlike the Edinburgh vaults, no one quite knows why these caves and tunnels were carved out however long ago.

Some say they could have been related to druids and witchcraft, a secret gentleman’s drinking club, or even part of an escape route from Craigmillar Castle, these hand-carved caves even include a chapel! Fascinating.

Tours are by appointment only, so make sure you plan ahead for this one!

Read More: 50+ Fun Things to Do in Edinburgh 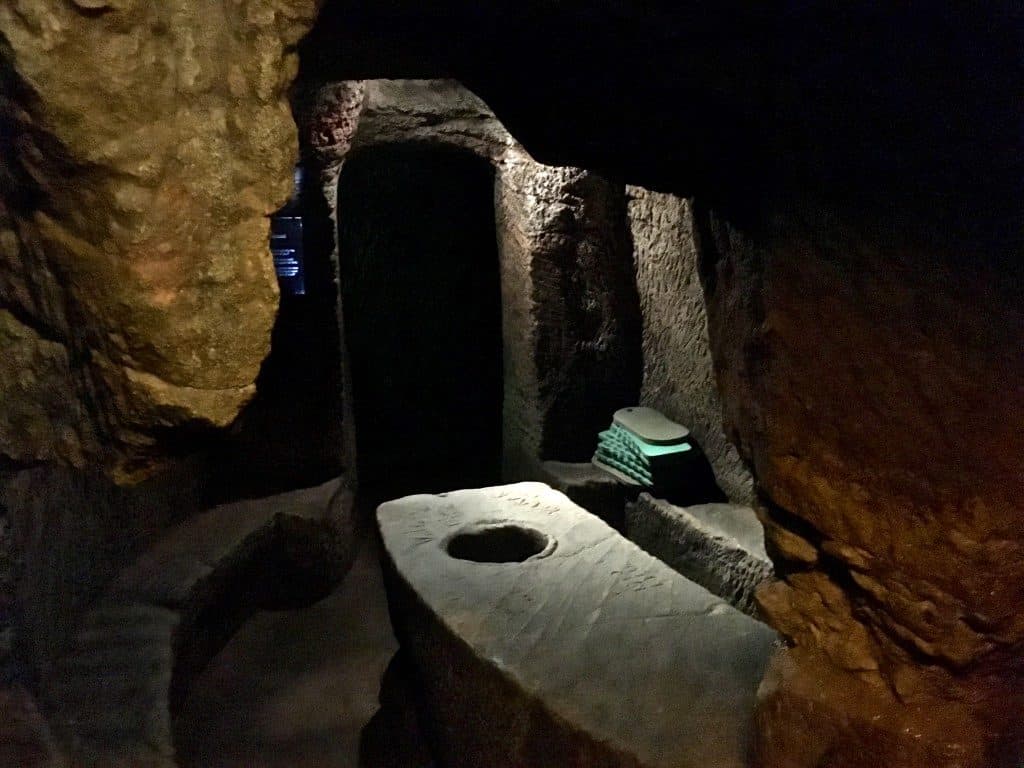 If you’re looking to see all the main sights in Edinburgh, I wrote a HUGE post last year about ALL the things to do in Edinburgh, but this small list is about finding out more about Edinburgh’s hidden gems, and the spots that are lesser known by tourists or sometimes even locals alike.

There are so many things to see in Edinburgh and I can’t wait to get out and explore and discover even more hidden gems!

Have you visited any of these places in Edinburgh?

Planning your Edinburgh trip? Check out these posts: 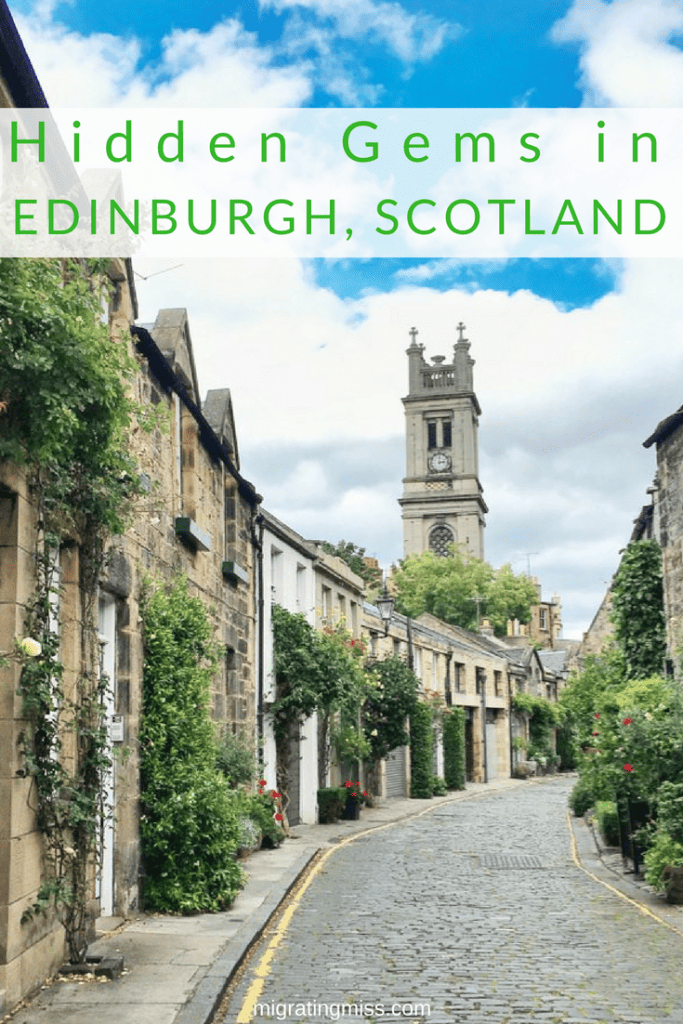 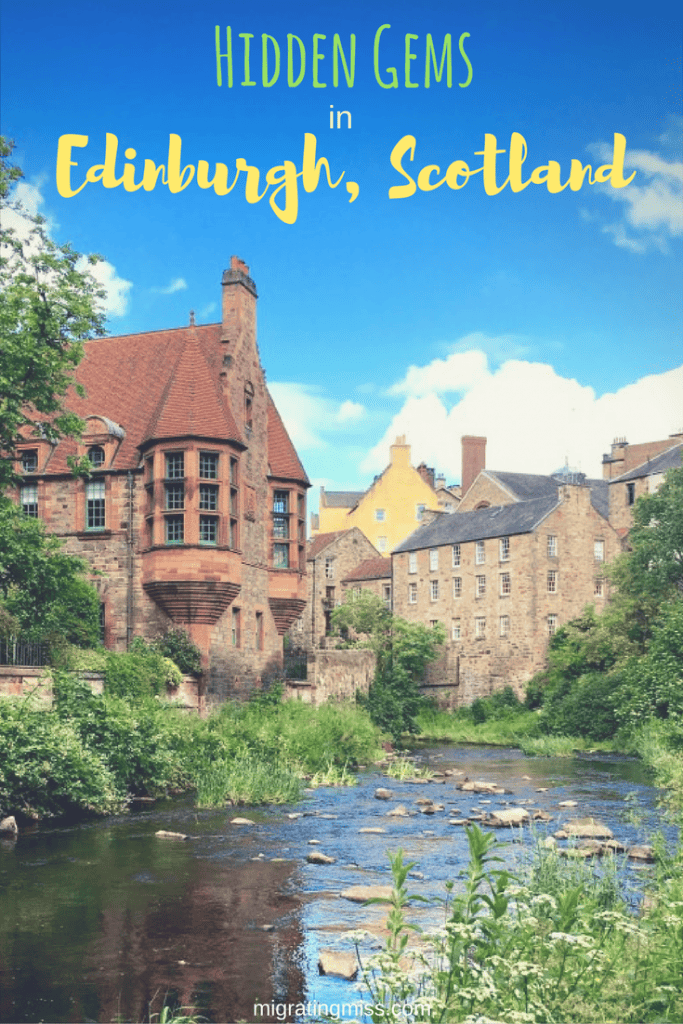