The time of changing leaves, snuggly clothes, days getting shorter, packing away the travel stuff and bunking down for the winter.

Wait, what? Not that last one. It’s actually time for my favourite travel season in Europe! Also known as low season/shoulder season/off-season.

Who made that up? They either had no clue what they were talking about, or they wanted to put other people off because they realised what I have, that travelling in autumn and winter in Europe is actually awesome.

I love travelling at any time of year (obviously), but I’m particularly fond of travelling in the colder months for lots of reasons, and maybe I can convince you that you don’t need to sit at home for the next six months until it’s warm to travel again.

I come from a land down under (sorry, I couldn’t resist), and when I moved to Europe, I found myself travelling more in the winter.

In New Zealand, it’s not uncommon to take a trip overseas in the middle of the year, which also happens to be our winter, to take advantage of the warmer weather elsewhere. And because our summer coincides with Christmas and New Year, it’s more usual to stay in New Zealand and travel locally to see friends and family.

Europe is the opposite. Summer in Europe is HIGH TRAVEL SEASON. With capitals, because seriously, places get packed out. Most of my colleagues at work would save up their leave and go for a lovely (expensive) summer holiday.

Now I love summer travel, but being on a two-year working holiday visa meant I had limited money and time to see Europe, and I needed to see as much as possible no matter the season.

Read More – Best Places in Europe to Visit During the Summer

Luckily, travelling in Europe during the winter months of September to April, known as the shoulder seasons or off-season, turned out to be fantastic! I’d even go so far as to say that the best time to visit Europe is winter.

So what’s the deal? Why should you try and travel more in autumn and winter in Europe?

This one is kind of cheating. I just said how much I love travelling in the colder seasons, and now I’m telling you to chase the summer in Europe in the off-season.

The thing is, September/October or March/April is one of the best times to travel in Europe. During this time, many of the southern parts of Europe still have warm weather, definitely better than somewhere like the UK.

It’s also often a cheaper time to travel to sunnier climes as fewer people choose to go abroad since it’s just outside of the high season and school is in session. I’d go as far as to rank September as the best month to explore Europe, but then, it is my birthday!

If you’re not ready to put away your summer dresses, short-shorts, and jandals/flip-flops/thongs by September, then head to places like Spain in winter, Portugal (try Lisbon in the off-season!), Greece and Croatia.

Just to prove my Winter sun point, when I wrote this post, I was in Spain in October and was 30 degrees…

Read More About –Spain in Winter

Read More About –Lisbon in the Off-season. or The Algarve in the Winter 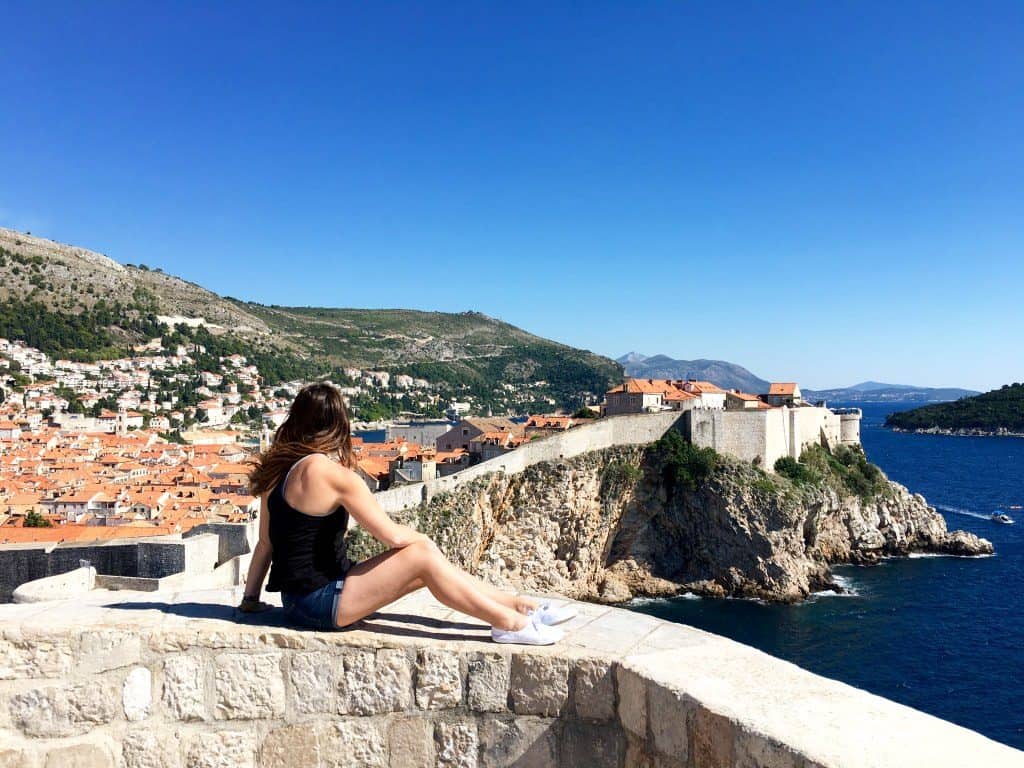 Winter or off-season is also one of the cheapest times to travel in Europe. Flight prices in the summer season in Europe can get a little crazy. So many people are travelling, and the airlines know it!

When I first moved to Europe, I didn’t know where to start with ticking off my enormous, ever-growing bucket list. I started travelling in the offseason in Europe because I realised I could use the Skyscanner ‘Everywhere’ option to find places to travel and at the cheapest flight prices.

Travelling in autumn and winter in Europe is generally always going to be cheaper, and this just made it even better!

I flew to places I had never even considered, like Hamburg in Germany, and I went to Iceland in November when it was early enough to see the Northern Lights without the freezing temperatures.

You can pick up cheap flights for longer breaks, but I tended to look for city break weekends away. It’s the perfect time to explore a city in just a few days.

There are plenty of guides out there on how to see a city in a short amount of time, like 24 hours in Krakow or one day in Copenhagen, so get the cheap flights and get exploring during the best time of year to visit Europe!

Of course, it’s nice to spend longer in each place, but if you can have a cheap weekend away, why not?

Read More About –The Best European City Breaks in Winter

Read More About –City Guide – Spending One Day In Copenhagen 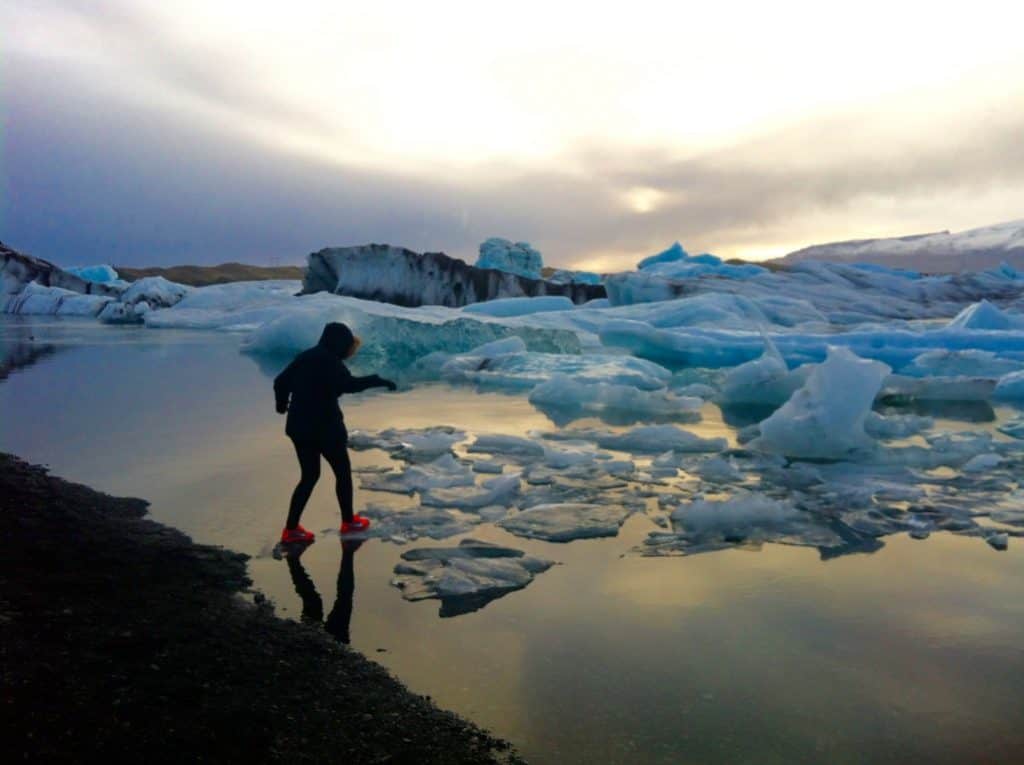 A lot of accommodation providers use the seasons to set prices. You can strike some great deals by choosing to travel to Europe in winter when it’s colder.

Some of the hostels I stayed in on my travels were half the price of the summer months, and many of the Airbnbs or hotels were a third less expensive.

It’s just another reason to plan your next European trip in winter or autumn!

(P.S. I book most of my accommodation through Booking.com now because of the free cancellation policy and the variety of accommodation available, including Airbnb-type places.

Maybe they named it off-season because it puts people off?

You shouldn’t be put off by travelling in Europe in October and beyond though because you’ll be one of the lucky ones. The ones who don’t have to push your way through the crowds to see the sights!

Paris without the crowds? Yes, please.

I visited Ireland in January, and my Mum and I were the only people in the whole of Blarney Castle. The line for kissing the Blarney Stone can go all the way from the Castle roof down the winding staircase to the ground floor!

Visiting the Lake District in winter meant I was able to enjoy the beautiful views with minimal (or no!) people.

Read More About – Paris in the Winter

Read More About – The Lake District in Winter 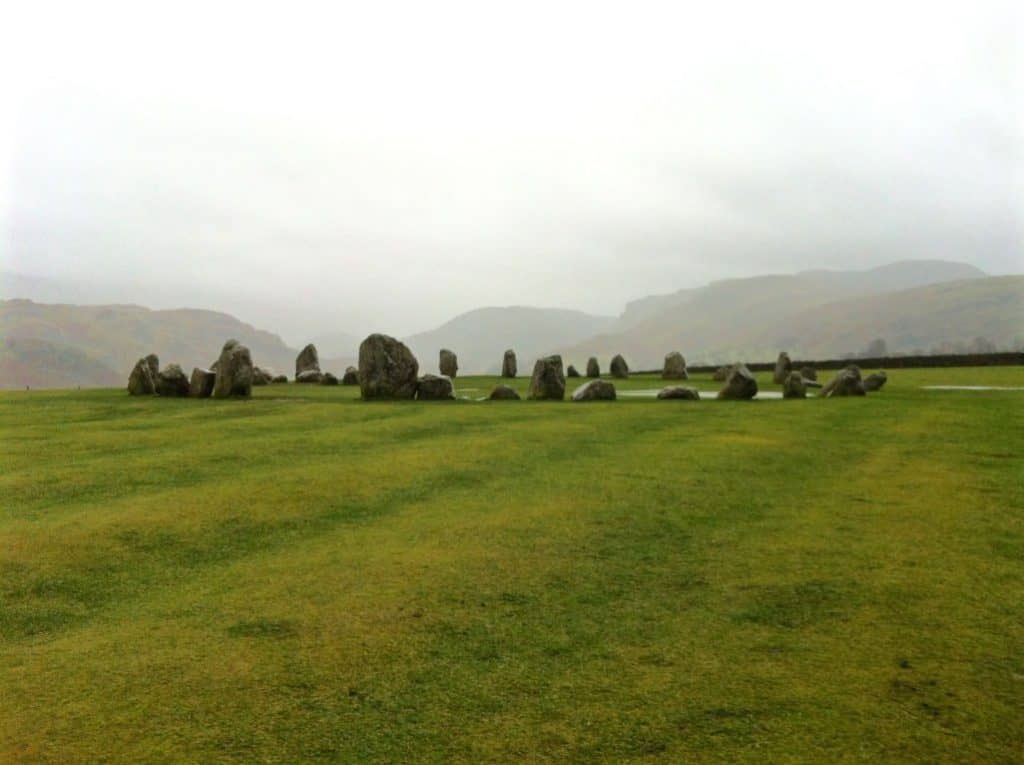 Southern Spain, for example, can easily reach a sweltering 35-40 degrees in the height of summer, and for me, that’s just too hot!

Then there are places that are just perfect for European winter travel, especially around Christmas. Let me tell you, you haven’t experienced Christmas fully until you’ve been to a European Christmas market!

Travelling to Eastern Europe in winter was one of my favourite travel experiences. Wrapping up in warm coats and scarves and wandering the streets of the old towns of Poland is just one example. 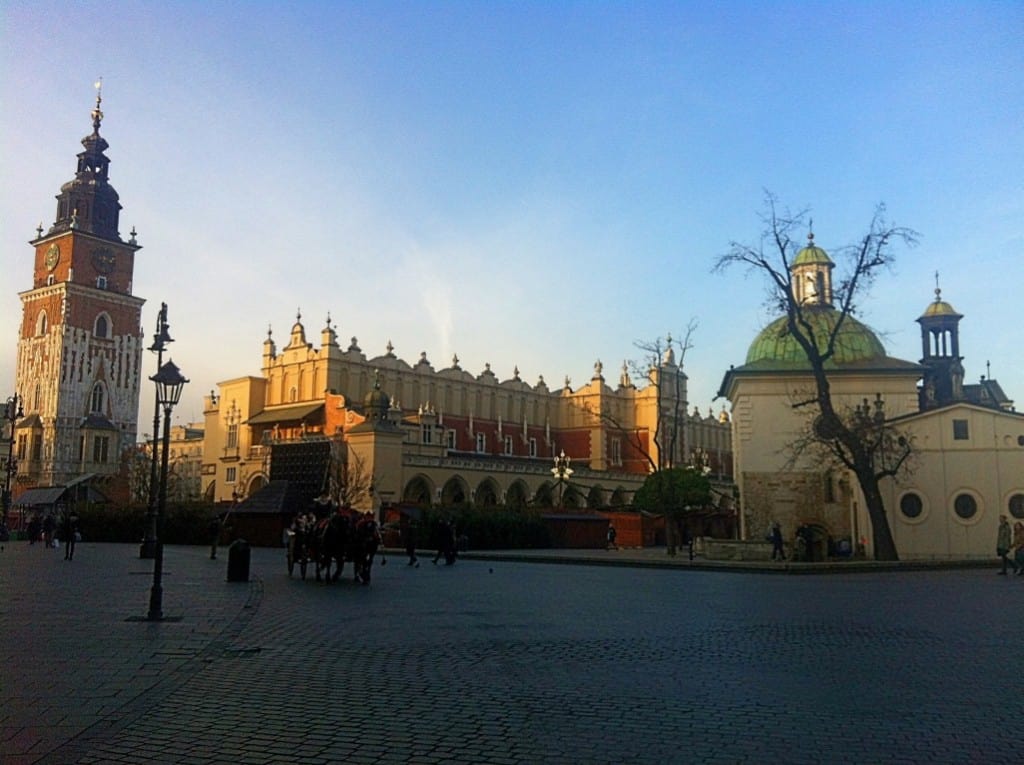 The BEST thing about winter travel in Europe? Christmas Markets! Yes, I mentioned this above, but it also deserves its own point.

Seriously, the rest of the world is missing a trick in not having these. The mulled wine, the delicious different foods, Christmas decorations, lights and music everywhere.

It’s a truly magical experience and something I probably should have listed as the first reason why I love European winter travel so much! 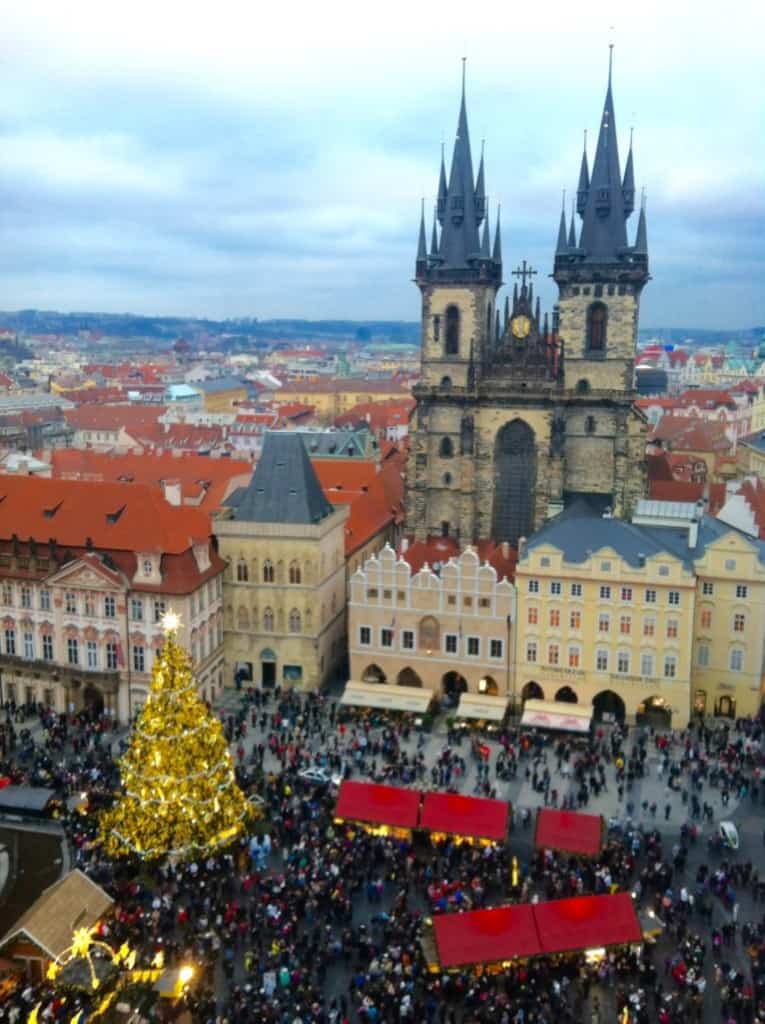 Different things to see and do

Christmas Markets are just one of the different attractions you can enjoy when you travel Europe in winter.

Try to catch a glimpse of the famous Northern lights is top of many people’s bucket lists, and visiting Northern Europe in winter is the best time to see them.

Travelling to Europe in the winter also means snow, and therefore skiing. Europe has some world-famous ski resorts, and some of them are really great value for money.

Next time you want to try winter sports, think about something like skiing in Bulgaria!

If you visit at the end of the season, you can also enjoy the snow on the mountains without necessarily having such cold weather. 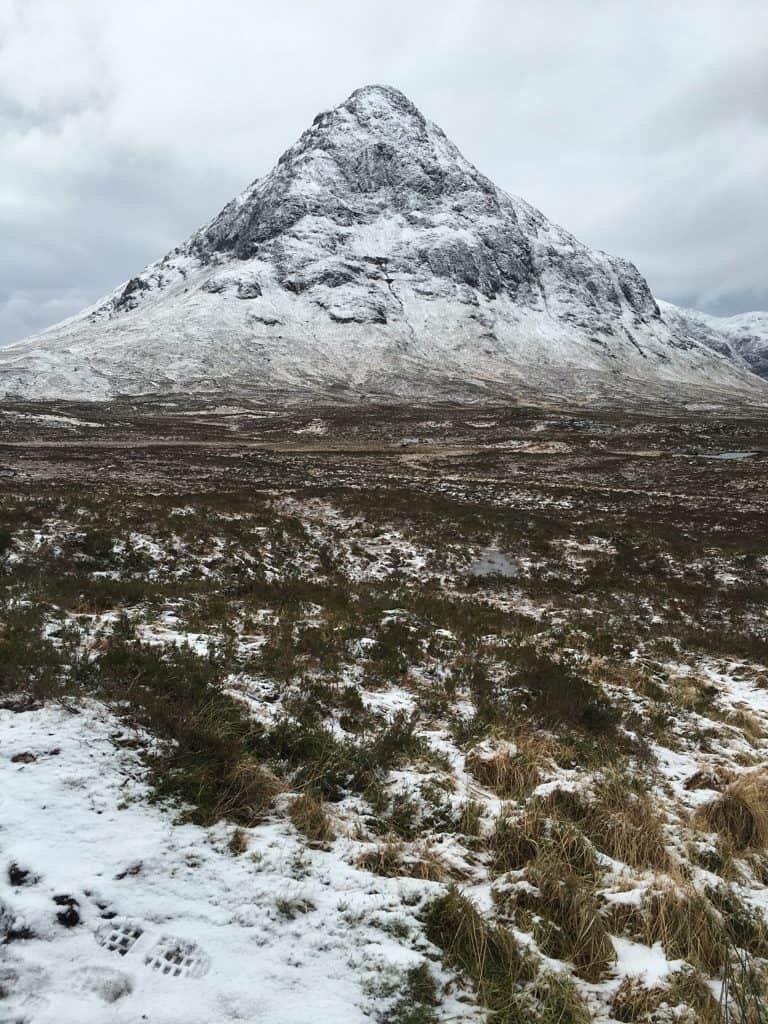 Ok, so I know I’ve said that winter is the best time to visit Europe, but there are some reasons why not everything about visiting Europe in the low season is fantastic.

You might find that some attractions have more limited hours, or they close in the offseason. If there’s something you HAVE to see, then make sure you check it out whether it’s going to be open first or if there are limited off-season opening hours.

The weather can also still be very warm in the shoulder seasons, but it can also be unsettled. One day it’s sunny and warm, and the next, it’s raining. Not so fun. That’s why you need to pack for winter travel with layers in mind!

I also like to adopt the attitude of never letting the rain stop me (bar an actual torrential storm) and always find a way to get out and enjoy it anyway.

While the length of days in the shoulder season in Europe shouldn’t be a problem, in the dead of winter, the daylight hours can be very short if you go north. I have distinctly unfond memories of going to work in the dark and going home in the dark in the middle of winter in Scotland.

When I think of travelling in Europe, I not only have memories of sunbaked lands and turquoise waters, but I also think fondly of wrapping up in winter coats and scarves and sitting in some old town square, warming my hands with a mulled wine.

If you want a cheap time to travel and not have to worry about the crowds, then trust me, winter is the best time to go.

Don’t let the weather put you off, and get planning your next trip to Europe!

Have I convinced you that the best time to visit Europe is off-season?

Planning your trip to Europe in the off-season? Here are some posts to help!

Sonja x If you liked it, pin it!